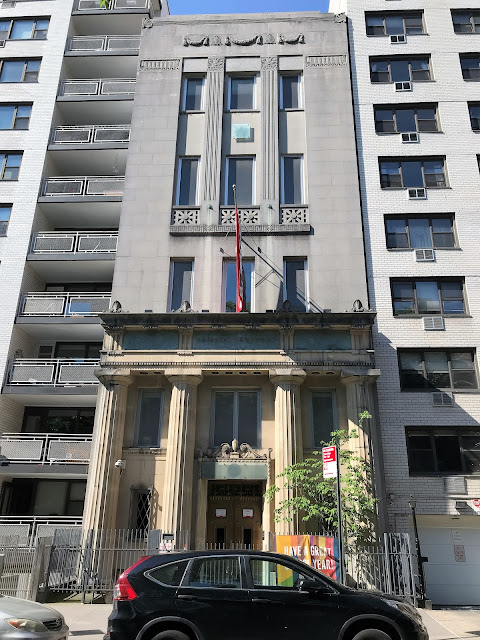 Political and social unrest in the German states prompted thousands of immigrants to settle in New York City beginning in the late 1840's.  By 1855, only Berlin and Vienna had larger German-speaking populations.  The new citizens clustered on the Lower East Side and East Village, creating what would become known as Kleindeutschland, or Little Germany.
On July 3, 1879, The New York Times reported, "The corner-stone of a German Masonic Temple, in Fifteenth-street, near Third-avenue, was laid yesterday afternoon in the presence of a very large number of Masons and spectators."  The article noted that the decision to build a temple had been made four years earlier, "and an association of German lodges was organized for that purpose."
The article said, "the building, when completed, will be five stories high, and be made of Baltimore brick, with Nova Scotia stone trimmings.  The cellar and basement will be devoted to business uses, and on each of the three of the floors will be a lodge-room, with the necessary ante-rooms."  The 1894 History of the Most Ancient and Honorable Fraternity of Free and Accepted Masons of New York would call the building a "noble structure, the birth of German thought, and innate feeling for home and fatherland."
Designed by Arthur M. Thom, a member of the firm Thom & Wilson, the structure cost $60,000 (about $1.6 million today).   Thom's Queen Anne design featured stone bandcourses that delineated each story, brick piers that provided dimension and a handsome pressed metal cornice.  On November 9, the New York Dispatch commented, "Though not large enough to be imposing, the building presents a very neat appearance," noting "the heavy stone stoop gives the appearance of solidity to the whole." 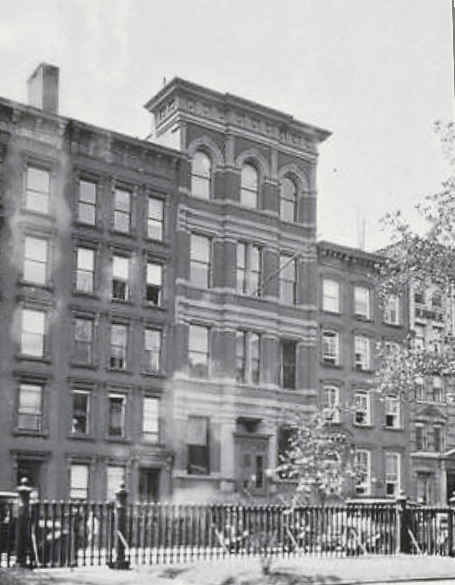 from the collection of the New York Public Library
In the basement were a restaurant and dining hall.  The first floor held a lecture room, 28 by 62 feet, and the second and third floors contained lodge rooms (the Corinthian and the Ionic, respectively), which were the same dimensions as the lecture room.  The fourth floor held a smaller lodge room, the Doric, and the janitor's apartment.  The New York Dispatch said, "Every lodge room has suitable preparation and examination rooms attached."   They would be used by 12 German lodges.
To help pay for the building, a series of benefit events was held throughout the construction period.  On November 2, 1879, for instance, the New York Dispatch reported, "A Fair, in aid of the German Masonic Temple Fund in this city, will be opened in the building itself, No. 220 East Fifteenth street, November 10th, 1879."
The building was formally opened on March 4, 1880.  While the residents of Little Germany were almost all first generation immigrants, the assassination of President James A. Garfield a year later, reflected how whole-heartedly they had embraced their new home.  On the night of September 16, 1881, the German-American Independent Citizens' Committee met in the German Masonic Temple.  Among the resolutions adopted that night was:

Whereas, The murderous assault upon the President of the United States not only endangered the life of the chief executive officer of our Republic, but also menaces our national organization and the security of truly republican institutions base on the sovereign will of the nation.

For decades to come, the various lodge rooms would be the scene of funerals.  Among the earliest was that of Franz Ruppert who died on September 30, 1883.  The New York Times reported, "He was one of the oldest German citizens of New-York, the first German malt-dealer in the City, and the father of Jacob Ruppert, the brewer...Mr. Ruppert was the oldest member of Trinity Lodge, F. and A. M., a member of Herrman Lodge of Odd-fellows, and of the Brewers' Association, and for many years of the German Aid Society."
One of the lodges, the Ironsides Council, No. 608, American Legion of Honor, passed a surprising and progressive resolution in the winter of 1884.  The New York Times reported that "after a spirited discussion," the members had voted to allow women to join the lodge.  The decision, no doubt, raised eyebrows within the various fraternal organizations throughout the city.
Among the groups that met here as early as 1884 was the Manhattan Liberal Club.  On December 26, 1885, The New York Times reported on its Christmas celebration.  "A Christmas tree, decorated with tinsel stars, one or two figures, strings of pop corn, and various ornaments, stood at the platform."  The club's president, T. B. Wakeman, gave a dissertation on "Yuletide Festivals."  Afterward, "candied fruits were distributed from the tree among the audience, which one lady in passing a dish said was their 'communion service.'"
The Manhattan Liberal Club would use space in the building for decades, hosting lectures like T. Thomas Fortune's speech on "The Afro-America's Future" on February 4, 1901; or Grace Isabel Coldron's talk on "Women and War" on March 10, 1905.  But things did not always go smoothly for the group.
On December 26, 1906, member Theodore Schroeder wrote a heated letter to Police Commissioner Theodore A. Bingham.  In it he insisted, "The club as such has nothing to do with anarchism.  It conducts a lecture platform with opportunity for free discussion of the lecture topics.  Owing to this chance for propaganda, anarchists often attend to avail themselves of the privilege to discuss their petty hobby."
The magazine Mother Earth, published by Emma Goldman, was sometimes sold at the door on lecture nights.  Schroeder complained, "I am informed that your policemen have threatened the managers of the club, who are not anarchists, with arrest and a dispersal of their meeting if they allowed Mother Earth to be kept on sale there...It is precisely such police lawlessness as this which breeds anarchists of the violent type."
In the spring of 1905, architect Otto L. Spannbake was hired to make interior renovations, notably the installation of modern toilets and new walls.  They would pale to the massive remodeling project designed by architects Louis Almendinger and M. Allen Schlendorf in 1936.  The entrance was lowered to street level and a two-part facade was applied over the original. 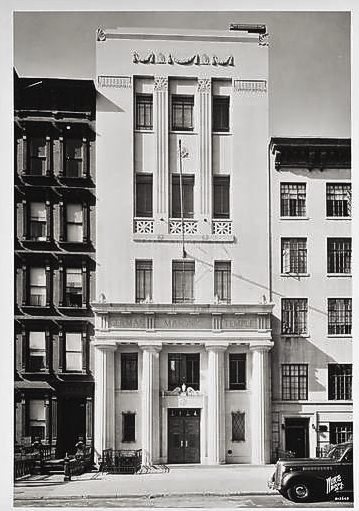 photo by Wurts Bros. from the collection of the Museum of the City of New York.
The result was an architectural split personality.  The lower two floors were given a classical Greek temple front.  Double height Doric columns upheld a substantial entablature.   The disparate upper floors were faced in gray cast stone, their sleek Art Deco design looking more like a bank building than a lodge. 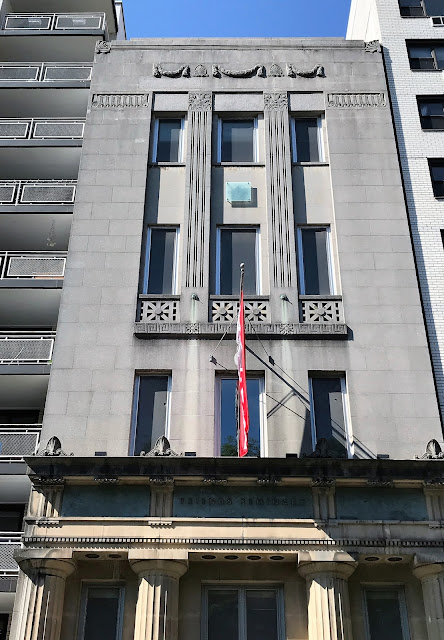 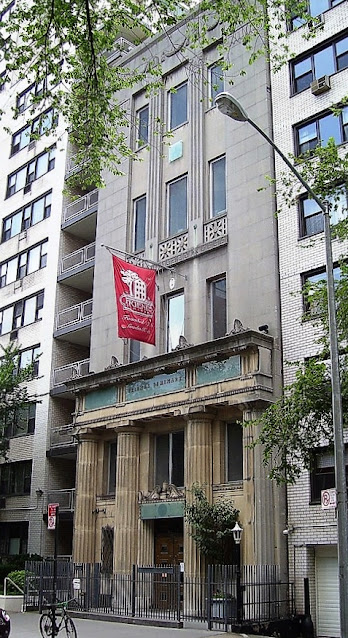 photo by Beyond My Ken
On March 16, 1997, The New York Times reported, "Friends Seminary, on Rutherford Place near Stuyvesant Square, plans to buy the German Masonic Temple across the street, and to relocate some of its upper-school classes there."   The article explained that following renovations by Anderson Architects the school would have an additional 15,000 square feet.  Completed in 1998, the renovations resulted in two classrooms for math and science per floor for students in grades 9 through 12.
photographs by the author
LaptrinhX.com has no authorization to reuse the content of this blog
Posted by Tom Miller at 1:00 AM