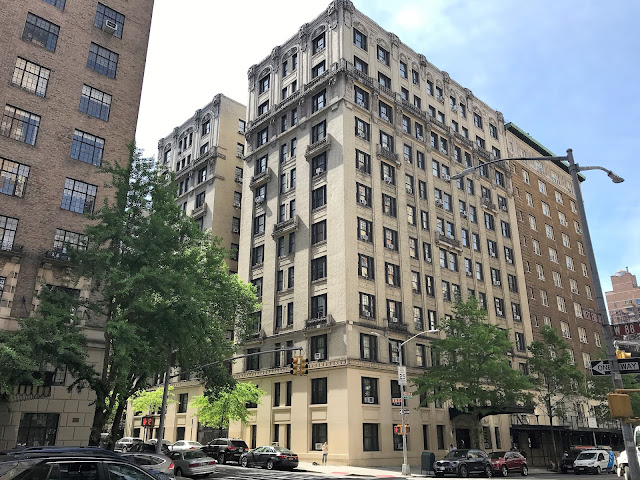 The concept of multi-family housing, associated with crowded, unsanitary tenement buildings, was scorned by well-heeled New Yorkers for most of the 19th century.  But as high-end apartment buildings with sprawling suites that rivaled the comforts of private homes appeared, minds changed.  Nowhere in the city was the idea of upscale apartment living more quickly embraced than on the Upper West Side.
On April 26, 1911, The Sun noted that Henry Schiff "has had a good deal to do with changing West End avenue from a private house section into what is fast becoming a purely apartment house district."  The article pointed out that he had just purchased the two residences at 264 and 266 West 88th Street, at the southwest corner of West End Avenue.  He already  owned the five opulent homes at 570 to 578 West End Avenue, adjoining the corner.
Schiff demolished the seven houses and hired the architectural firm of Schwartz & Gross to design an modish apartment building on the site, to be known as The Chautauqua.  (The name was a nod to the upstate New York community that had founded an educational program in the arts, humanities and sciences.)  Plans were filed in October 1911, with construction costs projected at$750,000--a staggering $21 million today.
Completed in 1912, The Chautauqua rose 12 stories, its great mass nearly cut in half by a deep light court on the 88th Street side.  Schwartz & Gross's neo-Renaissance tripartite design featured a highly-carved entrance within the two-story planar stone base. 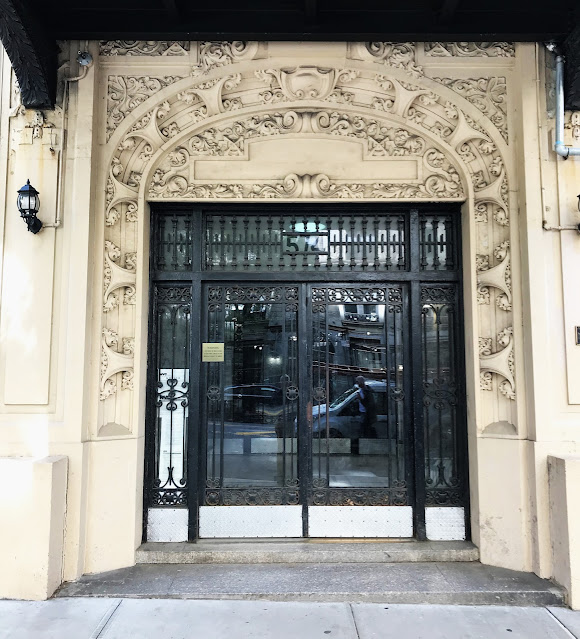 The eight-story mid-section was faced in gray brick.  The architects sprinkled the facade with stone balconettes to give visual and dimensional interest.  An elaborately-carved stone balcony girded the building at the 11th floor.  Rather than a cornice, Schwartz & Gross gave The Chautauqua an ornate stone parapet. 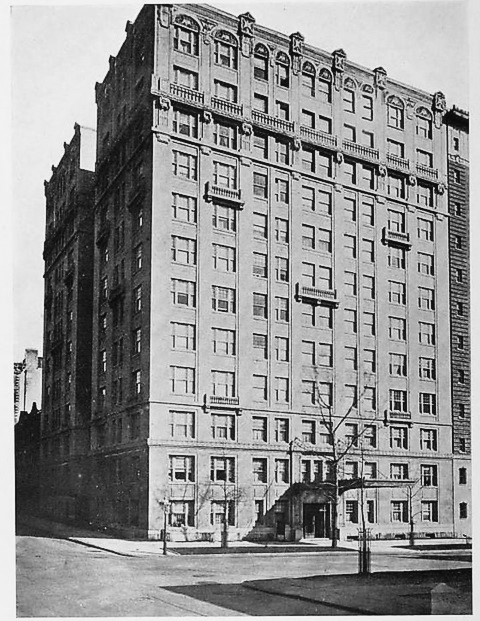 The American Architect, April 19, 1916 (copyright expired)
The lobby was meant to impress.  Guests entered into a sizable "court" before arriving in the marble-lined entrance hall, described by The New York Times columnist Christopher Gray decades later as being "as big as a four-bedroom apartment." 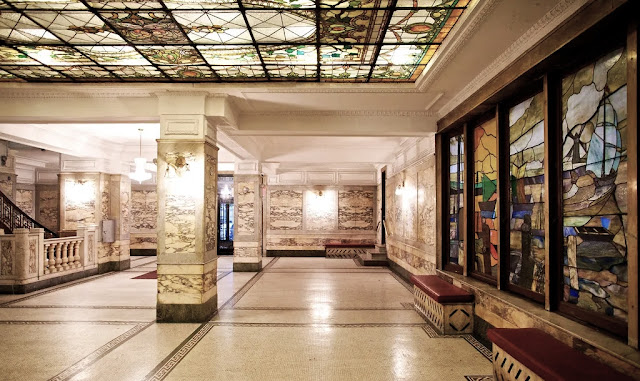 Lined in deeply-veined marble, the lobby would have had handsome Edwardian furniture in 1912.  photo by Benjamin Norman for The New York Times.
There were five apartments per floor, the largest being eight rooms (not including the maid's room or baths).  An advertisement described one apartment as having "8 large rooms and foyer.  Dining Room 16x23, Living Room 16x20.  Three Master Bedrooms.  Southern exposure.  3 Bathrooms."
A year after it was completed, Henry Schiff sold The Chautauqua for $1.1 million.  In reporting the sale on March 5, 1913, The New York Times commented, "The building was opened last October and is one of the latest of the high-class apartments on that thoroughfare."
Among the initial residents were the Hartwig N. Baruchs.  Baruch was a member of the brokerage firm of Baruch Bros.  They had barely settled in when trouble ensued.  Hartwig Baruch's Chinese valet was 28-year-old Sen Shih, who had formerly attended Harvard University.  Well-educated and well-mannered, the young man turned out to be a thief.  On August 4, 1913 he was arrested for having stolen clothing and jewelry valued at $1,000 from his employers.
Residents of The Chautauqua repeatedly appeared in society columns.  On March 29, 1914, for instance, The New York Press reported, "Miss Minnie Payne, one of the belles of fashionable uptown circles, went to Lakewood last week for a short visit."  The newspaper called her a "popular girl in the West End set."
And so, when the wife of advertising executive Joseph Kaufman was taken to jail on November 24, 1915, she was understandably humiliated.  It all started because a close friend was having domestic problems.  She and her husband, Andrew Albright, the president of the Rubberset Company, had temporarily separated.  While he maintained their lavish apartment in Harperley Hall, she moved to Newark, New Jersey.
Mrs. Albright contacted Mrs. Kaufman for advice and arranged a meeting in the Harperley Hall apartment, since it was much more convenient.  Mrs. Kaufman took along a friend and they arrived there before Mrs. Albright.  While they waited, Andrew Albright happened to phone the apartment, and was told by the butler that there were two unknown women there who "refused to leave the apartment."  Albright headed home, taking a detour at the West 68th Street station to report the "usurpation" of his apartment.
Mrs. Kaufman and her friend were taken to the police station where, "after being questioned at some length," they were released.  The untidy affair caused rumors that it was the Kaufmans who were having marital troubles.  Mrs. Kaufman "indignantly denied" that the following day, telling a reporter, "We are going to have the finest Thanksgiving dinner I can prepare, together, this afternoon." 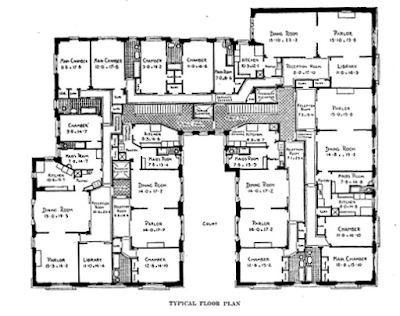 The American Architect, April 19, 1916 (copyright expired)
Living here in 1921 was Dr. Joseph Safian.  Associated with Beth David Hospital, he was later deemed by the Brooklyn Eagle, "the founder of modern plastic surgery."  The 35-year-old was driving his automobile on July 26 when he was involved in a tragic accident, striking and killing four-year-old Joseph Gunderson at 40th Street and Eighth Avenue.  Dr. Safian was held on a charge of homicide.  The Brooklyn Standard Union reported, "An attempt will be made by the police...to substantiate a report that the physician was driving at excessive speed when his machine hit the child."
Happily for Safian, he was exonerated in court just over a week later.  He explained to the judge that he was going eight miles per hour when the boy "darted from behind a truck in front of his machine."  He said that in attempting to avoid the boy, "he drove his automobile onto the sidewalk."
It may have been that unfortunate incident, however, that resulted in the breaking of the engagement of the doctor and Martha Steinhacker, which had been announced in January that year.  He eventually found love again, and in 1926 was married to Marion S. Samose.  In reporting on the wedding, the Brooklyn Standard Union noted, "Miss Samose was recently selected as one of Manhattan's prettiest girls by Samuel Kennedy, the English portrait painter."  It added, "After a short honeymoon tour, Dr. and Mrs. Saffian will establish their residence at 574 West End Avenue."
A most interesting resident of The Chautauqua was Florabell Sherwood Blackwell, wife of Wilson Hunt Blackwell, the treasurer of the United States Rubber Company.  In addition to her social activities, she was a songwriter and lyricist.  On February 3, 1931 The New York Sun said, "Opera artists who have sun [her songs] include Elvira Hildago, the Spanish cantatrice, and Nevada Van der Veer.  Beniamino Gigli of the Metropolitan Opera sang one of her songs written in Italian and scored for piano and organ, at his recent recital in Carnegie Hall."
She was an avid horsewoman as well.  "She is one of Central park's most noted riders and seldom fails, rain or shine, to give her blue ribbon-winning horse 'Tip Top' daily exercise on the bridle path," said the article.
The multi-talented Florabell Blackwell had just completed an astonishing craft project at the time of The Sun's article, which called her "New York's only woman cathedral builder--perhaps the only woman cathedral builder in the world."  In a single day she had fabricated a scale model cathedral, with stained glass windows, a working clock in the tower, and "soft lights [which] gleam from within."  But, said the article, "the greatest charm of this fairy cathedral is the music that sounds forth from it."  Florabell had used "electrical devices" to make the spire chimes ring, followed by the voices of choir boys, and then a soprano solo that the listener "recognizes as the voice of his hostess."
The Chautauqua continued to house well-heeled residents over the decades, like attorney Gilbert Dimock Lamb and his wife, Blanche; Yale-educated lawyer Harry Asher and his wife, the former Pauline Houseman; and Dr. Pierre A. Siegelstein, president of the United Hebrew Charities, the Hebrew Aid Association and the Home for the Aged and Infirm, and his wife the former Kathryn Gilman.
Two most unexpected residents, however, were discovered when a fire broke out in an apartment on July 19, 1973.  The New York Times reported that fire fighters "got the shock of their lives" when they responded.  "Inside the apartment...they found the fire they had come to extinguish, a woman, a four-and-a-half-foot-long snake and a foot-long Iguana."  All three were rescued, the fire was put out, and the two reptiles turned over to the American Society for the Prevention of Cruelty to Animals. 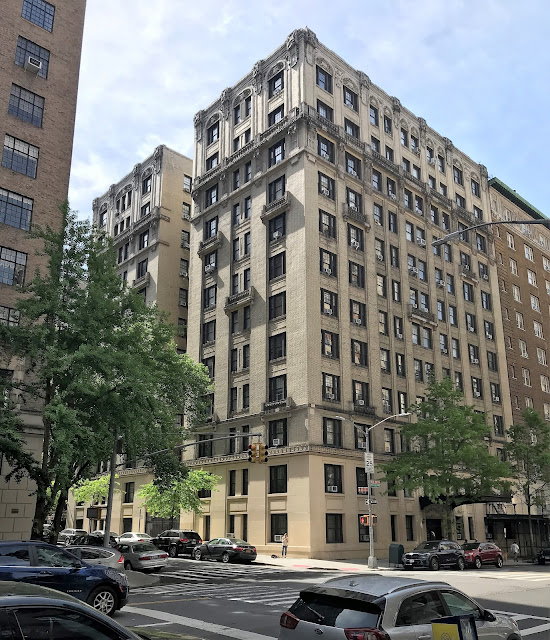 The Chautauqua is outwardly little changed since October 1912 when the first tenants moved in.  Renovations to the apartments over the years had resulted in the loss of much of the Schwartz & Gross's detailing and the ball-room sized lobby is bereft of furniture.  It recalls, however, a time when West End Avenue was transforming from a street lined with opulent brick and brownstone mansions, to one of modern apartment buildings.
photographs by the author
LaptrinhX.com has no authorization to reuse the content of this blog
Posted by Tom Miller at 1:00 AM