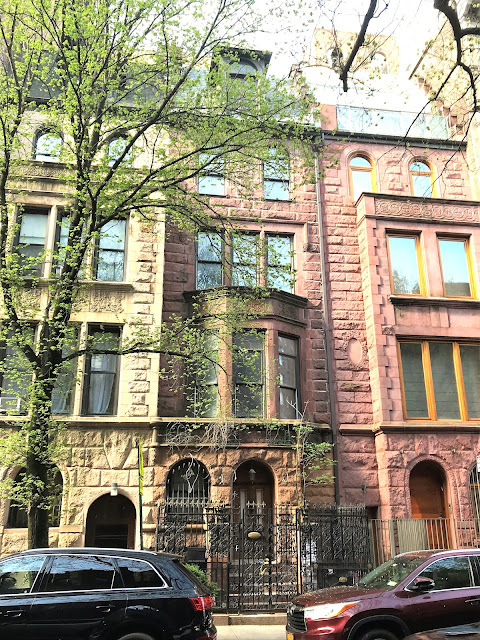 In 1893 builders Albert C. Squier and William E. Lanchantin acquired a 48-foot-wide plot of vacant land on the south side of West 82nd Street, between West End Avenue and Riverside Drive.  Somewhat surprisingly, instead of instructing prolific architect Clarence Fagan True to design two 24-foot-wide residences on the parcel, in keeping with the mansions that were rising in the neighborhood, they asked for three.

Completed in 1894, the trio were luxurious, despite their narrow, 16-foot widths.   True designed the group in his own take on the Romanesque Revival style.  The center house, 312 West 82nd Street, was an American basement residence, meaning it was entered almost directly at street level.  Clad in undressed brownstone, it rose four stories to a slate-shingled mansard with a prominent, peaked-roofed dormer.  At the second floor a faceted bay provided a balcony to the third floor. 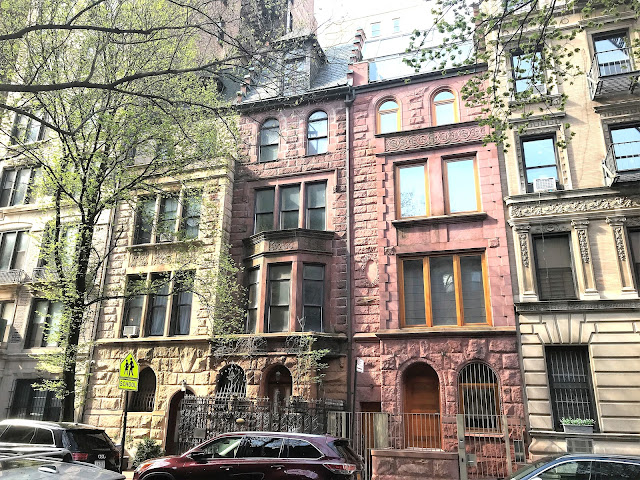 On June 30, 1894, the Real Estate Record & Guide reported that Squier and Lanchantin "have sold to a Mr. Martin No. 312 West 82d street, one of a row of newly-erected three-story [sic] stone front dwellings."  The use of pseudonyms when purchasing property was not uncommon, and as it turned out, "Mr. Martin" was, in fact, James Griswold Wentz.
An attorney with Sweetser, Pembroke & Co., Wentz was just beginning to deal in real estate, himself.  He and his wife, the former Georgie Banyer Nichols, had been married four years earlier.  Despite his significant wealth, it was his wife who drew the social attention.
Georgie's earliest American ancestor, Sergeant Francis Nicol, arrived in America in 1660 with his uncle, Richard Nicol, who later became Colonial Governor of New York.  Her great-grandfathers on both sides fought in the American Revolution.  Included in her pedigree were elite names like Ogden, Whitney and Bulkley.
Like all socialites, Georgie was involved in charity work.  On February 1, 1896, for instance, The Sun reported that she "will throw open her house to-day for the benefit of the Ladies' Domestic Missionary Society, St. Matthew's Episcopal Church, in West Eighty-fourth street."  That afternoon the ladies enjoyed a musicale.
During their early married years, the Wentzes traveled extensively, especially during the summer months.  On July 2, 1897, The Evening Telegram announced that the couple "will pass the month of July making a trip through the St. Lawrence River to the Thousand Islands.  In August they will go to the White Mountains."
At the turn of the century, Georgie turned her attention to politics.  On November 5, 1900, the Woman's Republican Club was organized in her parlor.  The power of Georgie Wentz's name was reflected in the appearance of Senator Chauncey M. Depew, who spoke for an hour at that meeting.  Georgie would be the club's president for years, and when a reporter asked her "for her own special reason for being a politician" in October 1904, she replied in part:

Because I believe that it is in the home that the incorruptible politician is made.  When you see a man lax in his duties in this respect, dishonest, unscrupulous, you will find either that he left home too early or that when he was there his duty was not made clear to him.
The mother has in her hands the molding of the child's morals.  If she neglects it, the fault is here.  If the voters of the coming generation are started right in the home they will continue on the right path.

In the meantime, the Wentzes continued their travels.  On May 28, 1901, The Evening Telegram reported that they would "visit the Pan-American Exposition, at Buffalo, in June.  Later in the summer they will go to Maine to remain until September."  And in July the following year, the New York Herald announced that they had sailed for Europe for the season.
The couple's summer seasons became more predictable after 1903 when they acquired a Newport cottage, Beaumaris, at the junction of Brenton and Wickham Roads over looking the ocean.  It was in Newport that Georgie's and Alva Vanderbilt Belmont's mutual cause, Women's Suffrage, coincided.  By 1914 Georgie was hosting the Newport County Woman Suffrage League meetings at Beaumaris; and in 1915 she aided Alva Belmont with a suffrage event at Marble House.
It is unclear when Georgie's widowed mother, Georgiana Bulkley Nichols, first moved in with the couple.  She died in the Manhattan house at the age of 70 on May 27, 1908.  The social prominence of the family demanded two funerals, one in the West 82nd Street house at 10 a.m. on May 30, and a second "at the homestead, in Southport, Connecticut," four hours later.
In 1910 Wentz purchased the residence at 335 West End Avenue and the following year sold 312 West 82nd Street to Isaac Steigerwald, a partner in The Machine Metals Products Company of New York.
Steigerwald was the first of a succession of owners.  He sold it in 1917, and it was resold in 1919, and again in 1922 to Ferdinand B. Minrath and his wife Anna.   Minrath was the head of the George Minrath Pharmacy.   Living with the couple were Scott Minrath, his wife Gertrude, and their children.  The adopted son of Ferdinand's and Anna's daughter, Scott Minrath was a 1918 graduate of Princeton University and worked with the Guaranty Trust Co. of New York.
The family was clear on their preferences in domestic help.  An advertisement in September 1922 sought, "Chambermaid-Waitress, small private house; only white need apply; German preferred."
Ferdinand Minrath did not enjoy his new home for long.  On April 21, 1923 he died in the house.  His will suggests that there may have been tensions between him and his adopted grandson.  Scott Minrath received $1,000 (about $15,000 today), and Gertrude and the children received the "right to occupy house at 312 West 82d Street."
Once again the house went through a succession of buyers, until 1958, when it was purchased by H. Edwin and Mildred Cason Smith as headquarters for their Group Relations Ongoing Workshops, Inc. (GROW).   The building remained little changed inside until 1970 when the Smiths converted the first through fourth floors to offices and classrooms.
On July 14, 1972, Iver Peterson of The New York Times explained that the group-therapy school "uses the group-discussion method to teach paying students how to conduct their own 'behavioral sciences' programs dealing with the emotional and social problems of their clients."  He described GROW as "One of the largest group therapy training schools in the city."
But Ivers was concerned about the faculty's credentials.  He pointed to five members with Ph.D's from Philathea College, "a former Bible school in London, Ontario, which is not accredited in Canada and is not recognized by any accredited American college or university."  He noted, as well, "GROW's founder and executive director, H. Edwin Smith, is listed as having a doctorate from an unaccredited college in Florida."
Dr. Edward F. Carr, director of the State Division of Higher Education, said, "It's pretty difficult to tell here where the charlatanism ends and the integrity begins."
In 1985 Paul Plassan hired architect Douglas P. Herrlin to return the property to a single family home.  He shared it with his partner, motion picture and Broadway hair stylist and wig designer Paul Huntley.  The house also served as Huntley's work studio.  Upon Plassan's death in 1991, title to the property was transferred to Huntley. 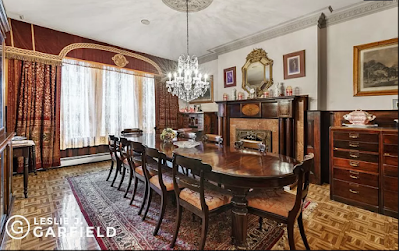 image via lesliegarfield.com
Huntley's work was epochal in the theater.  He was responsible for Carol Channing's trademark bouffant in Hello Dolly!, the wigs for Elizabeth Taylor in the 1963 motion picture Cleopatra, and for the 2014 play Bullets Over Broadway, alone, worked on 48 wigs.  In his 60-year career he styled hair and created wigs for more than 200 Broadway shows. 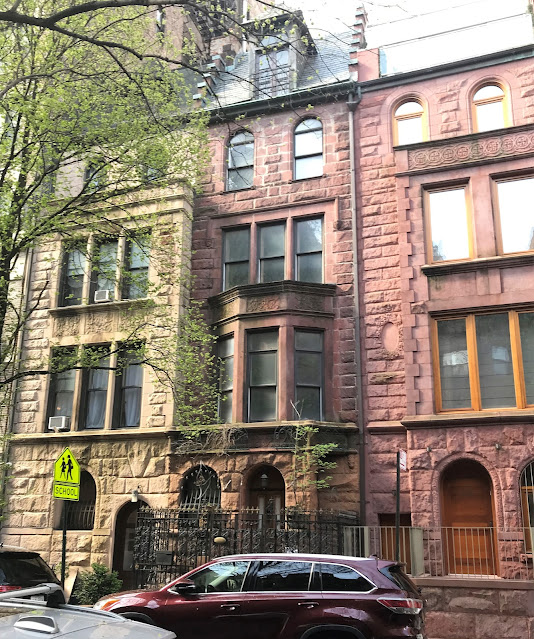 Huntley sold 312 West 82nd Street in January 2021.  The following month he flew to London to work on Diana: The Musical.  He died there on July 13 at the age of 88.
photograph by the author
no permission to reuse the content of this blog has been granted to LaptrinhX.com
Posted by Tom Miller at 1:00 AM