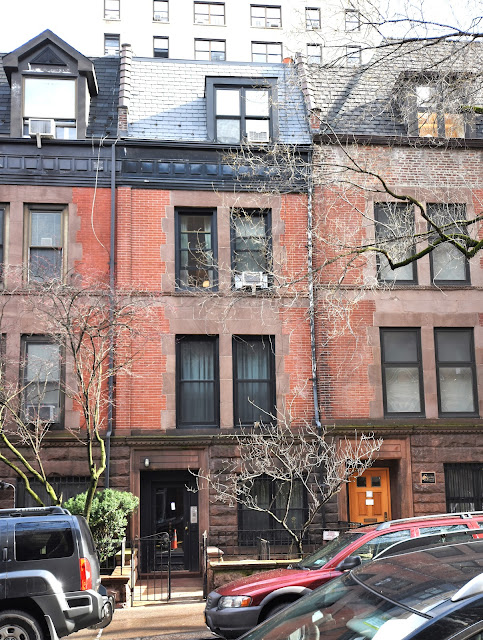 The dormer originally wore a triangular pediment, as seen in its neighbor to the left.
By the 1880's the former 18th century country estate of Charles Ward Apthorp was crisscrossed with newly-laid streets, and building plots were being rapidly filled with rowhouses.  Architect William J. Merritt, who sometimes acted as his own developer, was especially busy in the area at the time.  In 1888 he designed a row of six brick- and brownstone-clad homes at 111 through 121 West 95th Street for developer Charles Bouton.  Completed the following year, the four-story, American basement homes were patently William J. Merritt in design.
Their rusticated, rough-cut brownstone first floors served as a base for two stories of red brick.   Brownstone quoins framed the paired, centered windows and each peaked, tiled roof was interrupted by a single dormer.  Merritt placed the dormer at 119 West 95th Street slightly to the side, in keeping with the Queen Anne style's affinity for asymmetry. 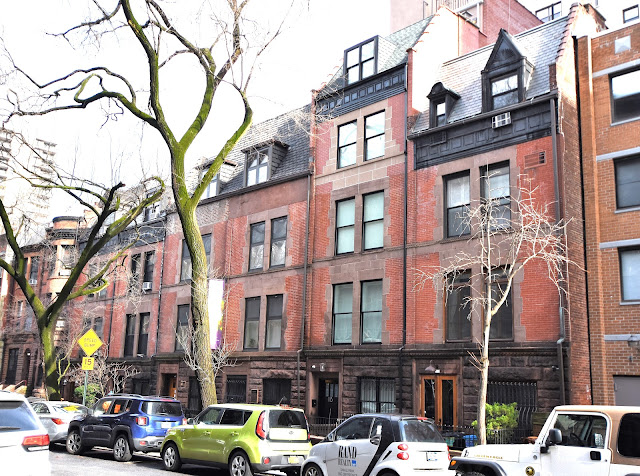 119 West 95th Street is behind by the yellow traffic sign in this photo.
Edward R. and Louise M. Sweetser purchased the 16-foot wide house in 1890, "on private terms."  They bought the property as an investment, immediately renting the house to the Rev. Dr. Francis Brown and his wife, the former Louise Reiss.
Brown taught at the Union Theological Seminary, on Park Avenue between 69th and 70th Streets.  The erudite clergyman came from an academic family.  His grandfather, Francis Brown, had been the president of Dartmouth College, and his father, Samuel Gilman Brown had been president of Hamilton College from 1867 to 1881.   Brown graduated from Dartmouth College, then earned his Doctorate of Divinity at Union Theological Seminary.   The same year he moved into the West 95th Street house he was promoted to Davenport Professor of Hebrew and the Cognate Languages at his alma mater.
Brown's scholarly books include Assyriology: Its Use and Abuse in Old Testament Study, and a revision of Gesenius' Lexicon.  His publications would earn him an honorary Doctorate of Divinity from the University of Glasgow, and honorary doctorates from Dartmouth College and Yale University.
The Browns remained in the house until 1903, when the Sweetsers sold it to John L. and Eva B. Edwards.  They, too, purchased the property as an investment, operating it as a boarding house.
Among their first boarders was a struggling actor, 19-year-old Doug Elton Fairbanks.  Years later, on May 11, 1922, The Evening World would recall, "Doug had once signed his name to the payroll of a hardware firm, for which he was acting as a clerk.  That was back in 1903 and at the time Fairbanks was living modestly at No. 119 West 95th Street."  The young man had to live "modestly," since his weekly pay at the hardware store was $5--about $150 today. 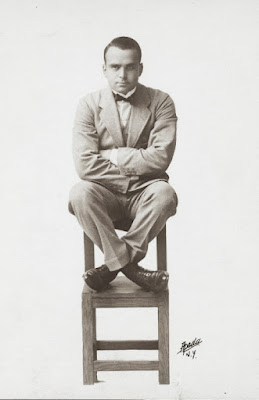 Douglas Fairbanks, from the collection of the New York Public Library
Fairbanks worked at the hardware store between acting jobs.  He told a reporter from The Evening World in 1922, "I'm sure no one will remember me as a hardware salesman; that is, if said recollection was prompted by his ability to dispose of hardware."  Douglas Fairbanks, of course, would go on to fame as a swashbuckling silent film actor, screenwriter and director, and a founding member of United Artists.
Typical of the boarders living in the house with Fairbanks was Martha Sherman Taylor.  The young woman's home was in Spring Valley, New York, but she boarded here while studying at Columbia University.
Living here in 1923 was Max Littenberg.  On July 1 that year he went to Long Beach, New York with his well-to-do friend, Morris Goldfarb, a manufacturer of ladies' garments.  For Littenberg, who lived in a furnished room in the West 95th Street house, riding in a chauffeur driven Buick sedan must have seemed a luxury.
Late that night they had almost made it to 95th Street to drop Littenberg off, when tragedy occurred.  On Amsterdam Avenue at 81st Street, the automobile crashed violently into a taxicab driven by Martin P. Rowan.  The Sun and The Globe reported, "The taxicab was hurled against the curb, where it turned turtle."  Martin P. Rowan had been thrown from the cab and was crushed to death when it rolled onto him.
Goldfarb, his chauffeur, and Littenberg "crawled out through one of the smashed windows in the sedan," said the article.  "They were badly shaken up, but refused medical aid."  The chauffeur was arrested on a technical charge of homicide.
Charles Redmond was running the rooming house in 1925.  Among his tenants was 40-year-old Harry Gomprecht.  A few months after moving in, despite listing his occupation as a lawyer, Gomprecht had fallen behind in his room rent.
On the night of August 23, 1925, Charles Redmond noticed the small of Lysol.  He was understandably concerned, because drinking Lysol was at the time one of the most common means of suicide in the New York City.  He traced the odor to Gomprechts room,  The New York Times reported, "Asked if he had been using it, Gomprecht replied, 'No.'  Redmond, however, summoned an ambulance from Knickerbocker Hospital.  Dr. J. C. Kenney was unable to save the man."  The newspaper said, "Ill health and money difficulties are thought to have been the cause."
Later that year, in November, 119 West 95th Street was offered for sale.  An advertisement succinctly read, "Clean furnished house, 14 rooms, good profit and home."
It continued to be operated as a furnished rooming house, home to working class tenants like Max Koller, a butler.  When his employer, Max Koller, closed his town house and opened his country place in Pelham Manor in April 1935, Koller, of course, went along with the family.  He had Saturdays off, and on April 19 he partied a little too hard.
The Argus reported, "Koller, who is employed as a butler by David Minton, Park Lane, became a bit confused in his directions Sunday morning and wound up beating at the door of E. O. Perrin's house in Manor Circle."  A member of the household called the police, "who found Koller wandering away from the scene.  They booked him on an intoxication charge."
The second half of the 20th century was not kind to the West 95th Street block.  Once home to respectable, middle-class families, it had noticeably declined.  In 1965, the City of New York took over much of Merritt's row as part of an urban renewal scheme intended to clean up the now-derelict homes along the block. 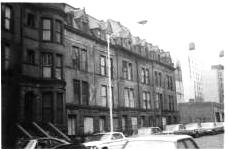 Most of the row was boarded up in 1969 when this photograph was taken.  119 West 95th Street is directly behind the light pole.  from the collection of the New York Public Library.
The conditions were reflected in a horrifying incident here in 1966.  On March 17, the Long Island Star-Journal reported, "An unidentified man was found beaten to death in an unoccupied Upper West Side apartment late last night.  Detectives said the man, in his late 50's, was found shortly after 11 P.M. in an unoccupied apartment on the second floor at 119 West 95th street."  It is unclear whether his identity was ever discerned. 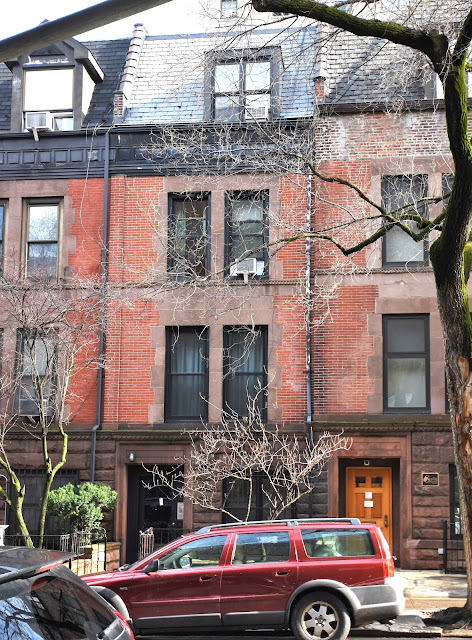 Change along the block would come again.  A renovation completed in 2004 resulted in four "class A" apartments in 119 West 95th Street.  And while it seems that little remains of William J. Merritt's interiors, its 1889 outward appearance is greatly intact.
photos by the author
no permission to reuse the content of this blog has been granted to LaptrinhX.com
Posted by Tom Miller at 1:00 AM