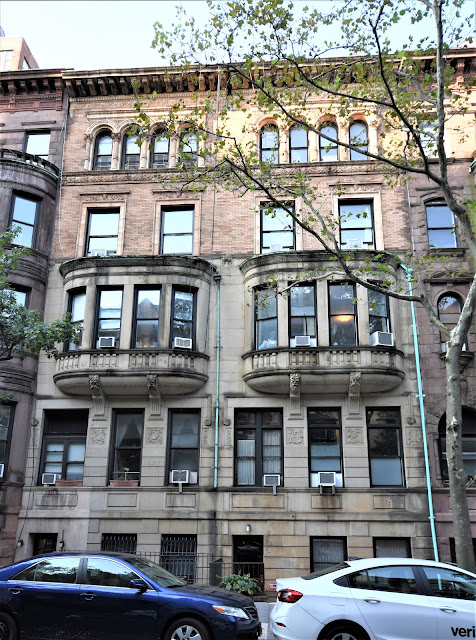 High stoops originally led to the entrances, which are now the wider windows or the second floor.
In 1891 developer F. G. Pourne completed a row of nine impressive stone-faced homes at 28 through 44 West 73rd Street.  Architect George H. Griebel had designed them in the Romanesque Revival style with elements of Renaissance Revival.  They were configured in an A-A-B-A-A-B-A-A-C pattern, the second story oriels of the A models and the three-story bowed bays of the B's creating an undulation of rounded forms. 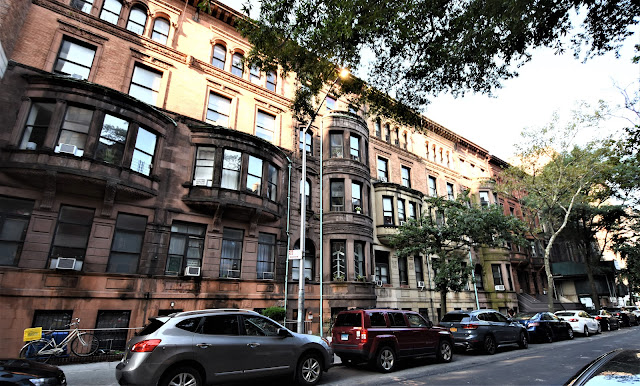 Among the matching A models were 34 and 36 West 73rd Street.  They were faced in limestone from the basement through second floors, and beige Roman brick above.  The second floor oriels, with their blind balustrades and bearded portrait brackets, stole attention from the parlor level.  Equally eye-catching were the openings of the top floor, arranged in an arcade separated by ornate, engaged columns. 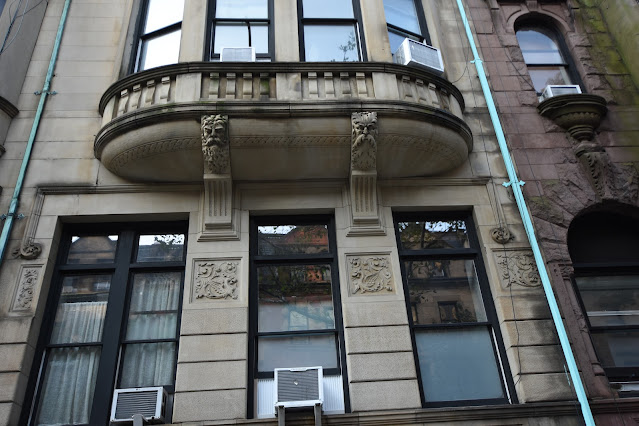 Pourne sold 34 West 73rd Street to Henry Bramble Wilson, a partner in the banking firm of Emerson McMillin & Co., and his wife, the former Mary Elizabeth Willard.  Both had been born in Ironton, Ohio and lived there until 1890, when they relocated to New York City.
The couple filled the house with fine artwork.  The New York Times later commented that Wilson was "known as an art connoisseur, and owned many valuable paintings."  He was, as well, a member of the National Arts Club and the chairman of the Art Committee of the Union League Club.
The Wilsons had three daughters, the eldest of whom made her debut five years after the family moved into the 73rd Street house.  On December 12, 1896, the New York Herald announced, "Mr. and Mrs. Henry Bramble Wilson, of No. 34 West Seventy-third street, gave a reception, followed by an informal dance, last night at Sherry's to introduce their daughter, Miss Ella Willard Wilson."  Ella was married to Captain Paul Comstock in the drawing room on April 29, 1903.
In the meantime, Evaristo Vicente Montalvo y Rodriguez-Prieto and his wife, the former Maria Louisa Leblanc y Hernandez, had purchased the house next door.   The wealthy owners of a Cuban sugar plantation, the couple had a son, Evaristo Vincente, who was 16 years old at the time.
In 1895, young Evaristo entered Princeton University.  He was the only Cuban and one of just two Roman Catholics among his classmates.  His studies were interrupted when the United States intervened on behalf of Cuba against Spain in its fight against colonial rule.  After the USS Maine was sunk in Havana Harbor, the Spanish-American War broke out and Evaristo enlisted to fight.
He later wrote in the Record of the Class of 1897 of Princeton University, "It was Cuba's fight--my fight.  Duty stared me in the face."   Evaristo did not see combat, however.  He was sent to the Philippines to serve as a translator.
Evaristo did not finish his studies at Princeton University and in 1900 Triennial Record light-heartedly updated the 1897 class:

Cuba freed, the Count has returned to his ancestral estates, and is now basking in the sunshine of the tropics, surrounded by a score of obsequious attendants, who fan his fevered brow and press to his parched lips costly goblets wherein is the clink of ice and the sparkle of nectar.  The enervating influences of such a life have destroyed all his epistolary energy...His mission in life accomplished, his sword has been beaten into a plow-share and his spear into a sugar-hook.  The raising of cane (sic) once more engrosses his entire attention.

Indeed, at the war's end, the entire family had returned to Cuba.  On October 31, 1900, the New York Post reported that the De Montalvos had sold 36 West 73rd Street to the Edward C. Clark estate.  At the same time the Montalvos left West 73rd Street, so did the Wilsons.  Like their next door neighbors, they sold 34 to the Clark estate, which rented the houses.  The former Wilson residence became home to Dyer Pearl and his wife, Euphemia Caroline, known familiarly as Carrie.  The couple had three children, William, Dyer, Jr., and Elsie.
Pearl was the senior member of the brokerage firm Pearl & Co and a member of the New York Stock Exchange.  Following his graduation from City College in 1874, he had joined Dyer, Pearl & Co., which his grandfather had founded in 1830.  He and his brother, William renamed the firm following their father's death in 1881. 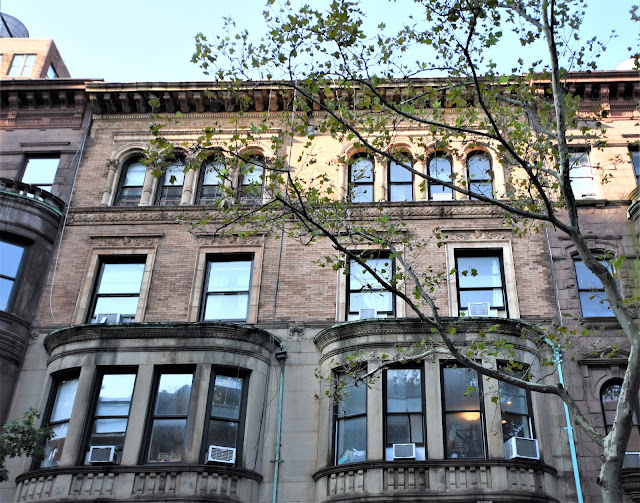 Like their predecessors in the house, the Pearls were staunch Roman Catholics, and on October 6, 1905, the New-York Tribune reported, "The Pope to-day received in private audience Dyer Pearl...and Mrs. Pearl."
While the couple was in Italy, drama played out at home.  Pearl & Co. securities worth $359,330 had disappeared from the National City Bank on September 27.  It was a massive theft, worth about $10.7 million today.  Then, three days later, a messenger dropped of a bulky envelope with a servant at the Pearl home.  The New-York Tribune reported, "Dyer Pearl, jr., a student at Princeton, went to the house Sunday, saw the envelope and telephoned to E. F. Slayback, a member of the firm...saying he suspected the envelope contained some of the stolen securities."  And it did.  There was $269,000 worth of the missing securities in the envelope, which had been dropped off by a regretful National City Bank Clerk.  The remainder was later recovered.
Dyer, Jr. was the last of the children to leave the house.  He was married to Bessie M. Pond Phipps on May 28, 1912.
Dyer and Carrie Pearl attended the Metropolitan Opera on February 10, 1913, and when they arrived home, Carrie realized that silver and diamond pin was gone.  She went back to the Met, only to find it had been claimed that night.   Much annoyed, she placed two announcements in the newspapers:

Will the lady who on Monday evening, February 10, claimed a silver Bar Pin from the doorman at the Metropolitan Opera House please send her name and address to box office and oblige the doorman?

Will person who claimed Pin at Opera House Monday night return to owner?  Reward and no questions.  34 West 73d.

As it turned out, there were two lost bar pins that night.  Carrie's chagrin was unfounded.  The New York Herald reported, "A few hours after the advertisements appeared Mrs. Pearl's bar pin was returned to her by a man who resides in Newark, and who found it on the night it was lost."  The article said the "I-would-worry" lines on the face of the Metropolitan Opera doorman were replaced by an "I-told-you-so" smile.
The Pearls suffered another troubling incident later that year.  Their close friends, William Henry Maule and his wife, who were from Philadelphia, were returning home on September 3 from "an automobile trip through the White Mountain region," as reported by The Brooklyn Daily Eagle.  They stopped at the Pearl house for a few days.  Just two hours after arriving, William went to the New York Club where, while talking to a friend, he collapsed and died.
After leasing the house for two decades, the Pearls purchased 34 from the Clark estate in March 1920.  That year the estate sold 36 West 73rd Street to conductor and voice coach Percy Rector Stephens.  Born in Chicago in 1876, Stephens had graduated from the University of Notre Dame and began his teaching career in New York City in 1897. 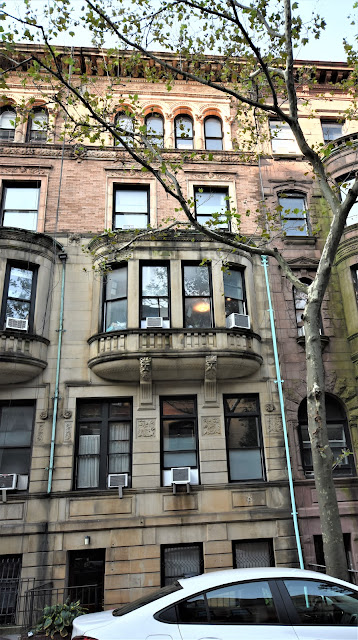 The year after he purchased the house, on September 14, 1921, Stephens married Jeannette Vreeland.  In 1925 the couple outfitted a floor as a rental apartment.  An advertisement that year described a four-room and kitchen space with "3 closets, parquet floors, paneled walls, 2 colonial fireplaces."
Carrie Pearl died suddenly on February 11, 1922.  Her funeral was held in the house three days later.  Dyer sold the residence in July 1924 to John Enos Quinn and his wife, Ethel C. Quinn.  Ethel continued the tradition of entertaining in the house.  On January 16, 1925, for instance, The New York Times announced, "Mrs. John Enos Quinn, President of the Women's Democratic Club of the City of New York, will entertain on the remaining Sundays in January at her home."
The end of the line for both houses came in 1944 when developer Frederick A. Jambes purchased these and four others along the row.  On December 1, The Sun reported, "The buyer now controls a combined frontage of 120 feet on which he plans to build a twelve story apartment house after the war."  And, indeed, two years later plans were filed by architect H. I. Feldman for a $450,000 apartment house at 28-36 West 73rd Street.
Those plans, however, were never carried out.  Instead, both 34 and 36 West 73rd Street were converted to apartments.  Their stoops were removed and the entrances lowered to the former English basement level.
John Harms, the head of the John Harms Chorus, operated his vocal studio from an apartment in 36 West 73rd Street.  His chorus's presentation of Elijah in Town Hall on May 31, 1944 "evoked great praise from the critics in New York papers," said The Diapason.   The journal added that his studio "at 36 West Seventy-third Street in New York, is one of the most spacious private studios in the city."
Another artistic tenant were dancers Daniel Nagrin and his wife, Helen Tamiris.  Helen's career began in 1926.  Born  Helen Becker of Russian immigrant parents on the Lower East Side, she studied dance at the Metropolitan Opera's ballet school.  The New York Times recalled on August 5, 1966, "In 1929 she introduced Negro spirituals to the Salzburg Festival in Austria in a recital there, and the follow year she joined Martha Graham, Doris Humphrey and Charles Weidman in founding the Dance Repertory Theater.
Turning to Broadway after the war, she arranged the choreography for Annie Get Your Gun, Showboat, Plain and Fancy, and Inside U.S.A.  In 1960, Nagrin and Tamiris founded a new concert company. 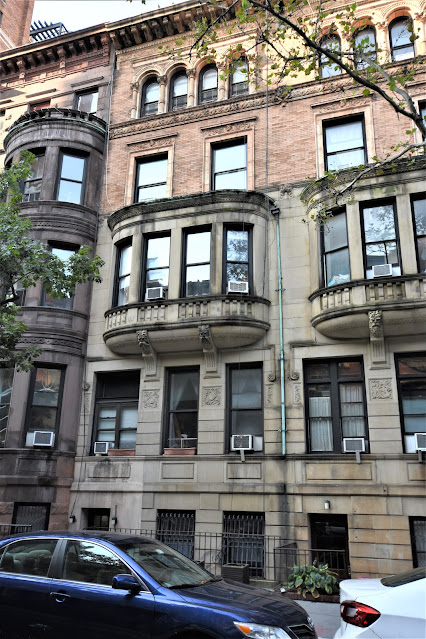 Other than their lost stoops, the two handsome houses are little changed since their first owners moved in their furniture and artwork in 1891.
photographs by the author
no permission to reuse the content of this blog has been granted to LaptrinhX.com
Posted by Tom Miller at 1:00 AM