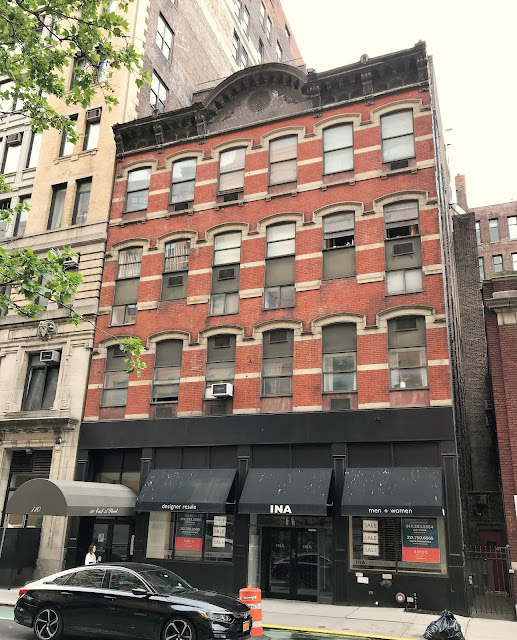 The horse auction firm of Johnston & Van Tassell was established in 1864 at 110 and 112 East 13th Street, between Third and Fourth Avenue.  In 1874, William Van Tassell partnered with Edward W. Kearney, changing the firm's name to Van Tassell & Kearney.  They wasted no time in upgrading their auction house.
On June 26, 1874, architect Joseph M. Dunn filed plans for a four-story "brick stable and auction mart."  Construction was completed the following year.  Dunn's neo-Grec design featured a cast iron base that supported four floors of red-orange brick trimmed in limestone.  Stone bandcourses connected the segmentally arched lintels and (originally) the bracketed sills of the openings.  A complex metal cornice with small and large brackets and a frieze of shell-filled corbels crowned the design.
Van Tassell & Kearney sold both horses and vehicles in its massive auctions every Tuesday and Friday at 10:00 a.m.  The business was vital to businesses and private citizens alike, with more than 100,000 horses in New York City at the time.  In 1878, The American Gentlemen's Newspaper called Van Tassell & Kearney, "One of the largest and most reliable auction and commission houses in this city, for the sale of horses, carriages, etc."  It employed a staff of between 40 and 50 men.
In at last one instance, a special Van Tassell & Kearney auction included unexpected items--dogs.  An advertisement for the June 22, 1875 sale listed "the entire establishment of  private family going abroad."  The wealthy clients were disposing of three vehicles and teams of horses.  But they also needed to see "two imported hunting dogs from the best Scotch stock, and well broken on all kinds of game."
The 1888 Illustrated New York, The Metropolis of To-day said the firm "handle[s] an average of 10,000 horses and from 12,000 to 15,000 wagons, carriages, harnesses, etc., at private sales."  The article also mentioned, "the firm are now engaged in the erection of a new building in the same block."  The Sun chimed in on August 24, saying that Van Tassell & Kearney "has been so successful that it was necessary...to seek a location for entirely new quarters."  At the time of the articles, their new home at 130-132 East 13th Street was nearly completed.
Van Tassell & Kearney had been leasing the building from Andrew S. Garvey.  William T. A. Hart, who briefly rented it next, made minor interior alterations in October 1889.
Alfred Dolge & Son moved into the building in 1893.  Alfred Dolge was born in Chemnitz, Germany in 1848.  His father, August Dolge, was the head of the piano-making firm in Leipsic, A. Dolge & Co.  Alfred came alone to America as a teen "with little or no money," according to The Engineering Magazine in April 1897.  After working in a piano factory for a year, he struck out on his own in 1869 at the age of 19.  It was a remarkably bold move, considering that the teen had just married "an estimable young lady without fortune."  Using the $500 he had saved, he started manufacturing piano felt in a small shop on Amity Street (later West 3rd Street) in Greenwich Village.
His success was phenomenal.   Now 43 years old, he had essentially created a town out of the little village of Brockett's Bridge, New York--which had been renamed Dolgeville.  The Engineer Magazine wrote, "a railway was constructed...fine stores, magnificent schools, an elegant Turn Halle, and other accessories of Civilized existence sprang into being under the magical wand of the Dolge management."
His factories in Dolgeville manufactured "felt shoes and sounding-boards"  The magazine noted, "The Dolgeville productions are recognized the world over as the best of their class, having taken first premiums at the world's fair at Vienna in 1873, at Philadelphia in 1876, at Paris in 1879, and at Chicago in 1893."

The Music Trade Review, 1897 (copyright expired)
The East 13th Street held the offices and showrooms of Alfred Dolge & Sons.  The firm employed 70 clerks at this location, and about 1,000 workers in Dolgeville.
Despite his firm's rapid expansion, or perhaps because of it, Alfred Dolge was in trouble in the summer of 1898.  On June 17, The New York Times reported on a judgment against him for two demand notes held by the Exchange National Bank totaling $30,108--just under $970,000 in today's money.
The company blamed the difficulties on what today we would call supply chain issues, telling The New York Times, "The trouble is only temporary and was due to the war scare, which stopped the placing of commercial paper.  The firm had to use considerable paper in the business, and inability to raise money in this way brought matters to a crisis."  The statement added, "Mr. Dolge is a man of such ability, energy, and resources that it is only a question of a little time when his affairs will come out all right."
Unfortunately, they did not.  The firm failed, not only devastating Alfred Dolge and his son, Rudolph, but the entire town of Dolgeville.  The Johnstown Daily Republican said the news "caused universal surprise and regret throughout this section of the state."  The article noted, "When verified...the news elicited many expressions of sympathy for the people of Dolgeville and especially for the man who has spent the best years of his life in establishing the immense business which he controlled and in upbuilding and improving the handsome little village."
In February 1899, Andrew S. Garvey hired architect H. A. Hausenstein to make interior renovations for his new tenant, the American Felt Company.  The firm manufactured "felt of every description," according to one advertisement.
In 1901, following Garvey's death, his wife, Helene B. Garvey, sold the building to the American Felt Company for $55,000 (about $1.73 million today).  It made subsequent renovations in January 1910 when architect Earl H. Syall replaced the windows.
The firm remained for over a decade.  On June 30, 1925, the New York Evening Post reported that the American Piano Supply Company had "leased the entire building."  Its stay would be relatively short-lived.
On June 17, 1927, the D. A. Schulte Retail Stores Corporation purchased the Huyler's chocolate and candy company, founded in 1846.  Headed by David Arthur Schulte, the firm operated "5¢-to-$1" shops across the nation.  Schulte now established the Huyler's Luncheonettes, Inc., and in March 1928 rented 110-112 East 13th Street.  Once again, renovations were made, this time by architect Frederick J. Berger.  The New York Times advised, "The space will be used for offices, a showroom and the manufacture of ice-cream, candy and bakery products."
The Great Depression had cataclysmic effects on the Huyler's candy portion of the firm, but the luncheonettes limped along until 1964 when the last of them was closed.
On October 7, 1981 The New York Times writer Alan S. Oser reported on the city's new loft law.  "A building that may provide the first test of how this system will work is a loft building at 110 East 13th Street," said the article.  The intention was to convert the structure to office space, but that never came to be.  Instead, a renovation completed the following year resulted in residences above the ground floor retail space, including two additional stories, set back from street view. 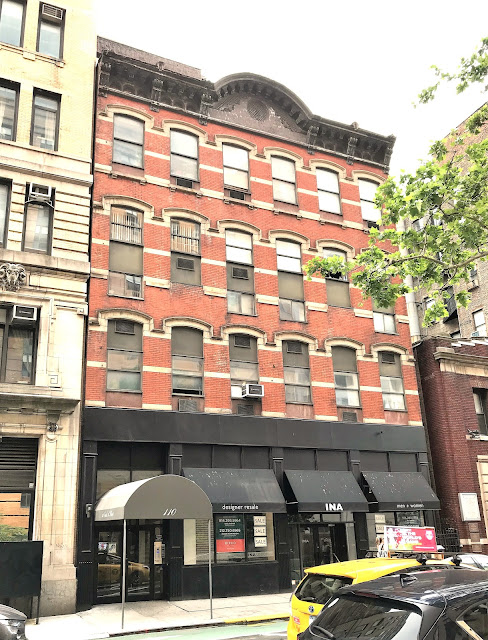 Unfortunately, over decades of renovations, the openings of the upper floors were brutally disfigured.  Only the top floor gives an idea of their original appearance.  Hints of the cast iron storefront remain, and yet Joseph M. Dunn's impressive neo-Grec design manages to endure.
photographs by the author
no permission to reuse the content of this blog has been granted to LaptrinhX.com
Posted by Tom Miller at 1:00 AM