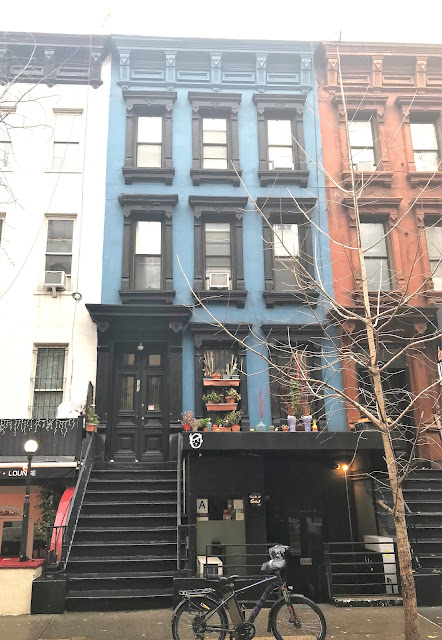 On January 12, 1884 developer John Livingston announced his plans to erect a row "stone front private dwellings" along the north side of West 46th Street, between Eighth and Ninth Avenues.   A month later his architect Frederick T. Camp filed plans for nine "three-story and basement brown stone dwellings," each to cost $11,500 to erect, or about $315,000 in today's money.
Camp designed the identical brownstone-fronted homes in the neo-Grec style.  The architrave stone frames of the windows were miniature versions of the entrance.  Geometric brackets with etched decorations upheld pronounced molded cornices.  The corbels of the cornices, with their paneled frieze, carried on the motif of the openings below.
The houses were completed in December 1884.  Livingston offered 347 West 46th Street for lease at $1,400 rent, an affordable $3,000 per month today.  His listing noted that the 20-foot-wide house was "3-rooms deep."  He rented the house for two years before selling it to Samuel T. Reed on March 15, 1886 for the equivalent of $558,000 today.
It appears that Reed and his family never lived in the house.  Instead it was operated as a high-end boarding house.  Among the high-profile residents here by 1889 was G. Waldo Smith, a wholesale grocer and member of the Chamber of Commerce.  He would remain in the house at least through 1894.
The outspoken Smith was unafraid to make his opinions known.  In 1894, Congress considered a Tariff bill that included an income tax proposition.  On June 2, the New-York Tribune entitled an article "The Metropolis Protests / Away with The Income Tax," and went on to report on a mass meeting of businessmen.  G. Waldo Smith spoke on behalf of the wholesale grocers, and the journalist deemed his remarks, "particularly acceptable."
New Yorkers were concerned with other trouble issues at the time.  The Lexow Investigating Committee, formed by the New York State Senate, was looking closely into corruption among the New York Police Department.  Smith reacted dramatically.  At a special meeting of the Chamber of Commerce on October 34, 1894, he addressed the group, calling for martial law.  He stressed that the force "should be stripped of all civil appearance, and instead, should be changed into a military body, with its members subject to court-martial and the sternest of discipline."
Also living in the house at the time were John F. Suydam and his wife.  Suydam, who came from an old New York family, was a wholesale grocer.  He had fought in the Civil War with the Seventh Regiment, known as the Silk Stocking Regiment, or the Blue Bloods, because a disproportionate number of its members came from the socially elite.  He was a member of the prestigious Holland Society, restricted those who could trace their roots to New Amsterdam.
In 1898 the North American Journal of Homoeopathy reported that Dr. Hugh Kidder had moved his office from the West Side Clinic and Hospital to 347 West 46th Street.  There was already a physician operating from the address at the time, Dr. Santia Crova, who conducted a bizarre set of experiments in "cutaneous metamorphosis."  They resulted in Crova being sued for $10,000 damages by a patient in April 1898.
In his complaint, John Barnes (described by The Brooklyn Daily Eagle as "a stalwart young negro") said that in July 1897, "Dr. Crova told him he would pay him $5 per week if he would submit to certain baths for the purpose of turning his skin white."  The Brooklyn Daily Eagle explained, "At the expiration of six weeks, [Barnes] was informed, he would be a white man."  Crova "represented himself as a scientist in that particular line," and the two signed a contract.
In court, Barnes detailed the treatments.  "The recital reads much like a chapter of medieval art," said the newspaper.

Barnes would enter the tub and remain there a half hour, sometimes two hours.  He would suffer a burning sensation, whereupon the physician would rub the parts with vaseline and cold cream.  Sometimes he could not renew the bath, so greatly did he suffer from the pain caused by the chemicals in the water, he says.  So powerful were these chemicals that they even penetrated the zinc of the tubs, he alleges, practically ruining the metal.

Barnes testified that his fingernails had turned deep black, parts of his body remained "extremely sore," and his general health had been "weakened and impaired."  He told the court, "Yet my skin is as black as ever."
In the first years of the 20th century single women were boarding in the house, still owned by Samuel T. Reed.  Elsie R. Hirst was here as early as 1906, when she was on the "eligible list" for the position of stenographer and typewriter for the Board of Water Supply.  She got the job, earning $900 a year in 1910.
Actress Marie Burker boarded here in 1916.  The location was convenient, since by now the entertainment district had moved northward to nearby Times Square.  She had a handyman who was doing work in the house arrested on May 7, 1916, accusing him of stealing a ring valued at $600 (a significant $14,600 today).  William Brower, who lived in the Mills Hotel No. 3 (a residence for down-on-their-luck working men), confessed he had stolen the ring.  Unfortunately for Marie Burker, the ring was gone.  "He asserted, however, that some one had since stolen it from him," reported The New York Press.
Another actor who lived here was Edwin "Poodles" Hanneford.  Born in England, he grew up in a circus family.   He and his family were brought to America by John Ringling in 1915.  By then, Hanneford was among the greatest trick horse riders in the world.  He fell in love with well-known actress Grace White, but she refused to marry him until after World War I had ended, fearing he would be killed.
Then, on August 20, 1919 The Brooklyn Standard Union reported, "Edwin Hanneford, an actor, of 347 West Forty-sixth street, Manhattan, was married to-day to Miss Grace White, a well-known actress."  The groom was 28 years old and his bride was 23.  Hanneford would go on to play in motion pictures, including the 1935 Our Little Girl with Shirley Temple; The Red Pony, with Myrna Loy and Robert Mitchum, released in 1949; and the 1952 The Springfield Rifle with Gary Cooper.
Albert E. Smith, who was "in the steel construction business," according to the New York Herald, lived here with his widowed mother, Elizabeth, around the time Edwin Hanneford and Grace White were married.  Elizabeth died on March 11, 1921, and her funeral was held in the house.
A few months later, Albert Smith's deep sense of patriotism prompted him to have an Englishman arrested.  Smith was at the Strand motion picture theater on August 18.  In the audience was 38-year-old Herbert Blache.  According to Smith, "when a 'close-up' of the [American] flag flying from the battleship Michigan was thrown on the screen, Blache hissed audibly."  Smith had Blache arrested, and two other patrons, Mrs. M. E. Johnstone and Louise P. Sanger, backed up his complaint.
At the station house Blache protested, insisting that he had applied for citizenship.  "I deny hissing the American flag.  I am an Englishman, though I have been in this country fourteen years.  I have nothing against the American flag.  In fact, I prefer it to any other," he told the police lieutenant.  He was held on $500 bail awaiting his appearance in court.
The following year Leonora M. Reed sold the house to Dr. J. Kessler, "for occupancy," according to the New York Herald.  The once-upscale block was undergoing significant change at the time.  The bustle of Times Square spilled into the neighborhood and one-by-one the former private homes were being converted to apartments with businesses in the basements. 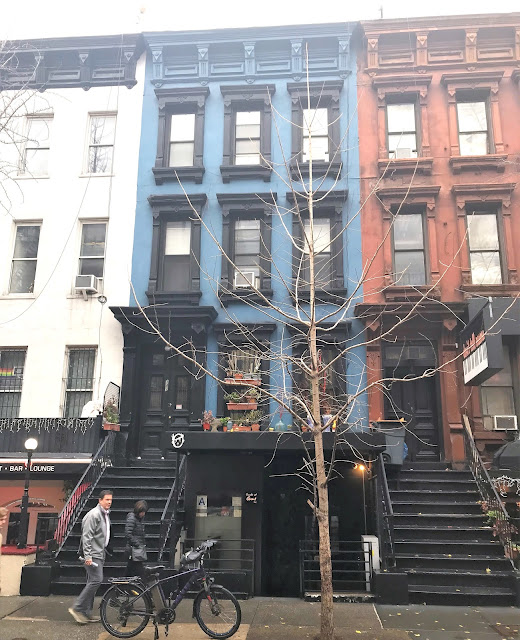 In 1971 the basement of 347 West 46th Street was Chez Cardinale.  It was not until 1978, however, that the upper floors were converted to apartments, two per floor.  In 1982 the restaurant space became home to La Vielle Auberge.  On December 3, The New York Times food critic Mimi Sheraton wrote, "Considering the demand for good, pleasant, moderate-price restaurants in the theater district, La Vieille Auberge should develop a loyal following."  And it did.  The restaurant was a fixture on Restaurant Row for more than a decade. 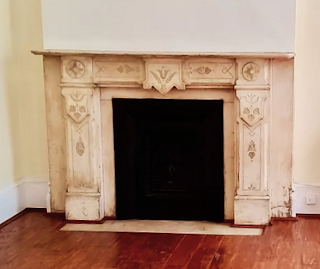 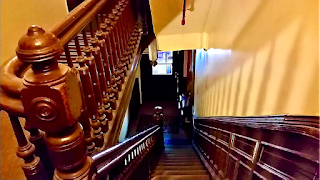 Some interior details, like the staircase wainscot and railings, and a marble neo-Grec mantel, survive.  images via streeteasy.com
In 1997 Les San Culottes, another French restaurant was in the space, replaced by Sushi of Gari, which opened in 2006.   Although the brownstone has been painted, Frederick T. Camp's neo-Grec facade is otherwise greatly intact--even the 1884 entrance doors survive.  Inside, a few of the original details, like neo-Grec marble mantels, remain.
photograph by the author
no permission to reuse the content of this blog has been granted to LaptrinhX.com
Posted by Tom Miller at 1:00 AM