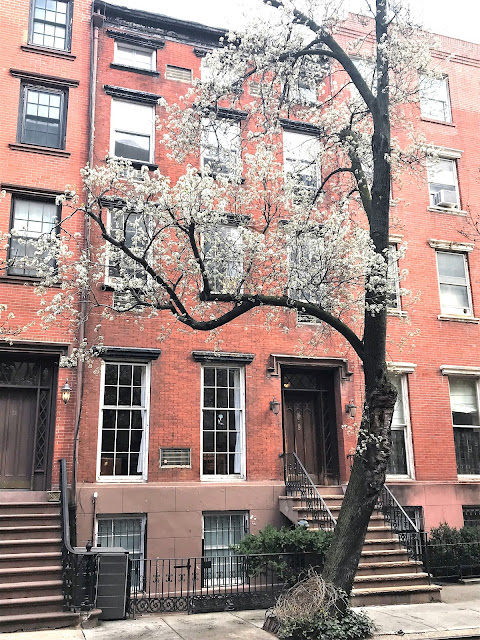 In the early 19th century, Greenwich Village expanded into what had been the 300-acre summer estate of Admiral Sir Peter Warren.   Charles Christopher Amos inherited a part of the Warren estate, and in 1819 Abraham Van Nest, president of the Greenwich Savings Bank, purchased the manor house.  The three ownerships would result in a confusing tangle of street names on the properties.
Charles Amos named the road running through his property along the stretch of thoroughfare running from the Hudson River to Greenwich Avenue Charles Street, after himself.  But he named a single block, between Waverly Place and Greenwich Avenue, Warren Place in homage to Sr. Peter Warren.  And Amos further added to the confusion by giving a nod to Abraham Van Nest by christening the north side of one block of Charles Street--between Bleecker and West 4th Street--Van Nest Place.
Until 1819 the Eagle Mills occupied the north side of the Warren Street block.  That year it was purchased at auction by Najah Taylor and Nathaniel Richards, whose Eagle Distillery sat on part of the site.  In 1847, as Greenwich Village expanded into the area, the pair sold seven plots to men engaged in the building trades.
They erected four houses, 1 through 7 Warren Place, as a group.  Completed in 1848, their Greek Revival design were most likely drawn from style books.  And yet, their entranceways and stoop railings reflected the emerging Gothic Revival style.  The Gothic-paneled doors were enclosed by diamond-paned sidelights and transoms below square headed drip moldings.  The elements placed the houses on the cutting edge of domestic design. 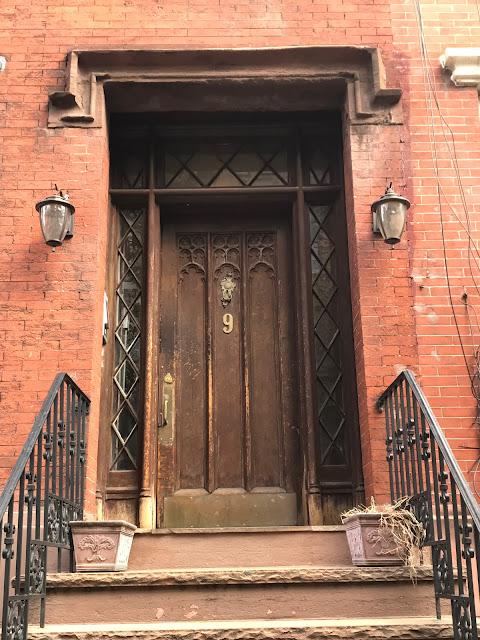 On September 22, 1847, about the time construction began, Abraham Riker Lawrence purchased 5 Warren Place as the home of his daughter, Margaret Parslow Norton, and her family.  She was the wife of Chauncey L. Norton family.  The couple had three children, Abraham Riker Lawrence, Cecilia Augusta, and Margaret L.  Norton was connected with the Bank of the Union, on the corner of Broadway and Howard Streets.  Following the resignation of James R. Del Vecchio in 1854, Norton was elected its president.
Interestingly, the Nortons used the addresses 5 Warren Place and 5 Charles Street interchangeably until 1879.  That year the block officially became Charles Street and the house received the new address of 9 Charles Street.
On May 9, 1851, three years after the family moved into the house, Margaret Norton died after what the Mourning Courier and New-York Enquirer called "a short and severe illness."  She was just 30 years old.  Her funeral was held in the parlor the next afternoon.
The following year, on March 29, 6 year old Margaret died.  She was buried in Trinity Cemetery next to her mother.
Abraham Riker Lawrence died on August 3, 1863.  His nephew, Andrew Lawrence, produced a hand-written will dated December 1839, which left the entire estate to Lawrence's brothers and sisters, and to his nephew.  By now all of the heirs had died except Andrew Lawrence.  Noticeably omitted from the list of heirs were the Norton children, Abraham Lawrence's grandchildren.  And so, Chauncey Norton went to court, suggesting the will was a forgery.
Norton had a stake in the proceedings, as well.  The Charles Street house was still owned by Lawrence at the time of his death.  By the terms of the contested will, Lawrence's nephew would now be the legitimate owner.
The trial dragged on for months.  The New York Herald said, "In the course of the long and exhaustive trail before the Surrogate very great acrimony was exhibited between the contesting parties, and a number of exciting scenes occurred among the counsel, there being four or five lawyers on each side."  Acrimony was understandable, given the fact that defense claimed that Abraham Riker Lawrence had never married and that Margaret Norton was an illegitimate daughter, therefore, not entitled to a bequest.
Finally, a decision was announced on April 29, 1865.  Despite the absence of evidence to support "the existence of the marital relation between the decedent and the grandmother of the infant contestants," the court deemed the Norton children "the heirs at law and next of kin of decedent."  As a result, Abraham and Cecilia inherited equal shares of the Lawrence estate and the Norton family now owned their home.
Chauncey L. Norton died at the age of 66 on February 16, 1880.  Abraham, now a broker, remained in his childhood home until March 1894 when he sold it to Henry Schlobohm "for about $18,000" according to The New York Times.  The sale amount would be equivalent to around $560,000 today.
A milk merchant who also dabbled in real estate, Henry would have to leave his Charles Street house in 1898 when he was called to fight in the Spanish American War.  (It would not be until 1916 that the Government granted him a $24 per month pension for his action.)
Henry consistently received mail and packages intended for 9 Van Nest Place.  In 1900, he and a group of neighbors finally  had had enough of the Van Nest Place confusion.  On October 2 they signed a petition to the Board of Aldermen that said in part:

Van Nest place is practically unknown except to persons living in the immediate vicinity of the block bearing that name, and for that reason expressmen and all others having packages, letters or messages for delivery, upon inquiry for Van Nest place are invariably directed to Charles street, and told that Van Nest place and Charles street are the same, and therefore from the fact that there are two sets of numbers from No. 1 to No. 18 in that street, the delivery at the wrong house is frequently made.

The petitioners asked that the name Van Nest Place be discontinued and that portion of Charles Street be renumbered.  Unfortunately for them, it would not be until 1936 that the change was effected. 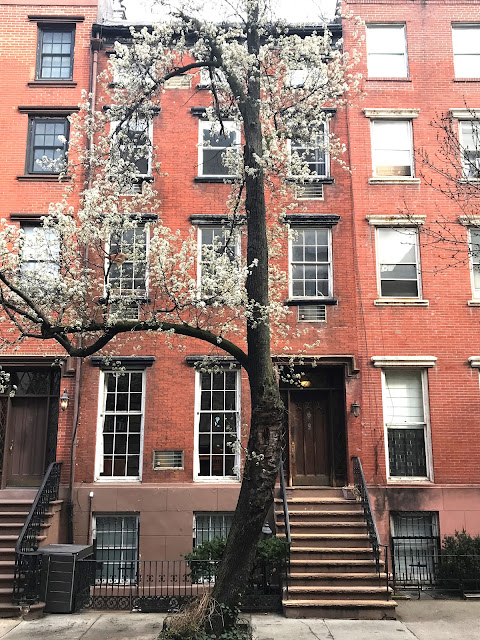 The former Norton house remained a single-family home until a renovation completed in 1971 converted it to apartments, two per floor.  At the same time, all of the surviving 1848 interior details, except for one or two Greek Revival mantels, were obliterated.
photographs by the author
LaptrinhX.com has no authorization to reuse the content of this blog
Posted by Tom Miller at 1:00 AM