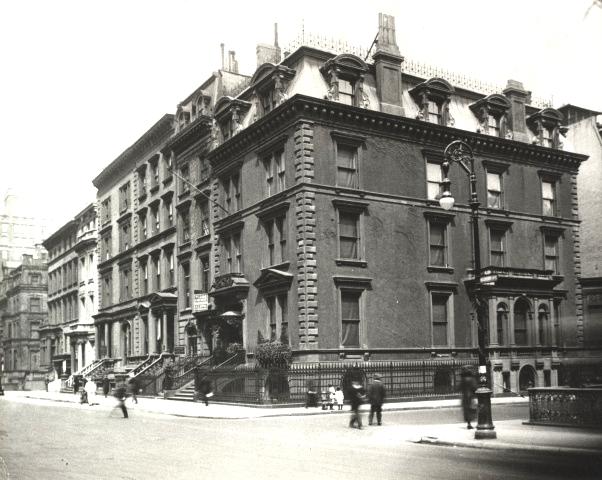 Moses Taylor Pyne had the glass and metal marquee installed over the entrance in 1903.  from the collection of the New-York Historical Society
Murray Hill was among Manhattan's most prestigious neighborhoods in 1864, its mansions rivaling or surpassing those rising along Fifth Avenue.  That year real estate investor John H. Sherwood erected a sumptuous, double-wide residence at the northeast corner of Madison Avenue and 39th Street.  Faced in brownstone, its Second Empire style design was the latest in domestic architectural fashion.  The rusticated stone basement level supported three floors of brick and a slate-tiled mansard roof crowned with lacy iron cresting.  A projecting bay on the side with grouped, arched windows--most likely fronting the dining room--provided a balcony to a second floor bedroom.
The mansion became home to newlyweds Alden Byron Stockwell and his wife, Julia Maria Howe.  She was the eldest daughter of Elias Howe, the inventor of the sewing machine.  Upon Howe's death in 1867, Julia inherited $2 million--around $36 million today.   Tragically, Julia died on March 21, 1869 at the age of 23.
The young stockbroker remained in the Madison Avenue mansion, The Augusta Chronicle saying on March 29, 1873, "His house on Madison avenue, corner of thirty-ninth street, is one of the most elegant and costly in the city.  It is furnished in a style of the greatest grandeur.  Even the fenders around the grates in the drawing room are of gold."
Described by historian John Haskell Kemble as "a vigorous but incautious young stock operator," Stockwell purchased the Pacific Mail Steamship Co. in 1871.  Things could not have looked rosier for the 37-year-old, but his fortunes were about to change.
In 1872, he began construction on an extension at the rear of the Madison Avenue house.  But he soon ran afoul of the city.  The minutes of the Board of Alderman on August 19, 1872 directed the Commissioner of Public Works "to notify A. B. Stockwell to remove forthwith the projection now being erected on his house, situated on the northeast corner of Thirty-ninth street and Madison avenue...as it is in violation of law by projecting four feet beyond the streetline."  The aldermen insisted that should Stockwell not comply, the city would demolish the structure.
But much more serious than an aborted construction project was the Financial Panic of 1873.  Stockwell was forced to resign from the Pacific Mail Steamship Co. that year "under a cloud because of his financial administration," according to Kemper.  Before long he declared personal bankruptcy, having lost what The New York Times called "a fortune of seven comfortable figures."  When his large art collection was auctioned off, the catalogue noted, "Nearly all of his pictures, by American, English and Scotch artists, were painted expressly to his order, and many are the master-pieces of their authors."
The Madison Avenue mansion became home to the family of Jules Reynal Roche Fernoy de St. Michel, "better known in New-York society circles as Jules Reynal," according to The New York Times later.  The newspaper called him "a Frenchman of excellent family."  He and his wife, the former Nathalie  Florence Higgins, had three surviving children, Mathilde Eugenie, Nathaniel Claude, Eugene Suguery.  (Jules Regual was born in 1874, but died of scarlet fever in childhood.)  The family maintained a summer estate, Rocky Dell Farm, at White Plains, New York.
Nathalie was the daughter of Elias Higgins, a millionaire carpet merchant.  Like Julia Stockwell, she was financially independent of her wealthy husband, the Chicago Tribune commenting that she "has a large property." 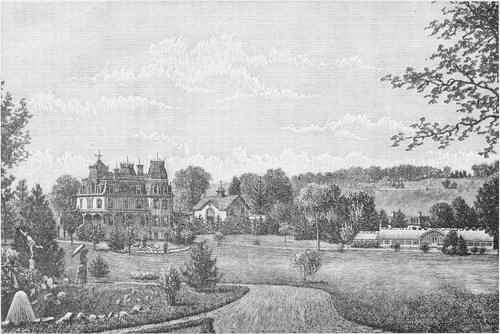 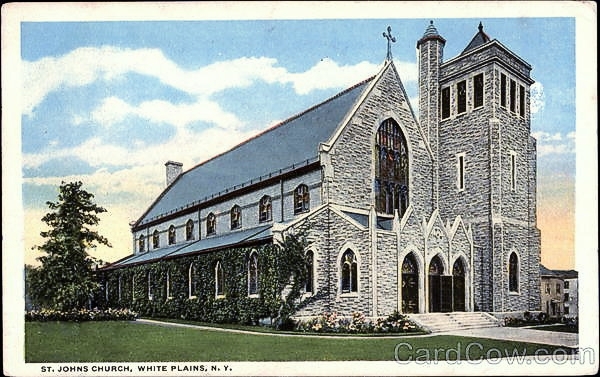 Nathalie Reynal purchased the land and paid for the White Plains church in 1892 as a memorial to her son.
The following year in February the Reynal estate sold the Madison Avenue mansion to Moses Taylor Pyne for $250,000, just over $7.75 million in today's money.  Born in 1855, the son of Percy Rivington Pyne and Albertina Shelton Taylor, he was married to Anna Margaretta Stockton, who went by her middle name, in 1880.  Educated as a lawyer, Pyne was a graduate of Princeton University, and had inherited a fortune from his maternal grandfather, Moses Taylor.  He was a director of four banks, the president of a railroad and sat on the boards of eight others, and was a director in several corporations.
Moses and Margaretta had three sons, Robert Stockton, Percy Rivington and Moses Taylor, Jr.  The family's country estate, Drumthwacket, was in Princeton, New Jersey. 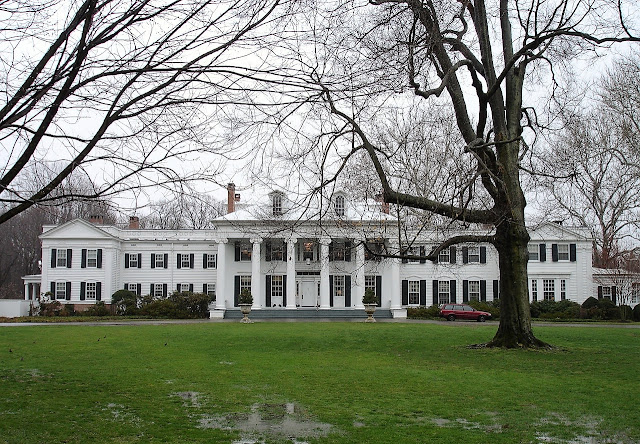 Built in 1835, Drumthwacket is today the official residence of the Governor of New Jersey.  photo by KForce
The Pynes immediately set out to update the vintage Madison Avenue residence.   In 1903, they had modern plumbing installed and also hired The Snead & Co. Iron Works to fabricate "ornamental railing, entrance gates and marquise."  (The French style glass and iron marquee was a noticeable add-on.)
Robert Stockton Pyne's engagement to Constance S. Pratt was announced on January 3, 1903.  Tragically, the wedding would never come to pass.  The 20-year-old groom-to-be died the following month, on February 27.
For years to come, the Pynes were highly visible in society, both in Manhattan and New Jersey.  Moses remained highly involved with Princeton University.  He was not only a trustee of the school, but was among its largest benefactors.  As chairman of the Committee on Grounds and Buildings, he was highly responsible for the appearance of the campus, staunchly advocating the Collegiate Gothic architectural style. 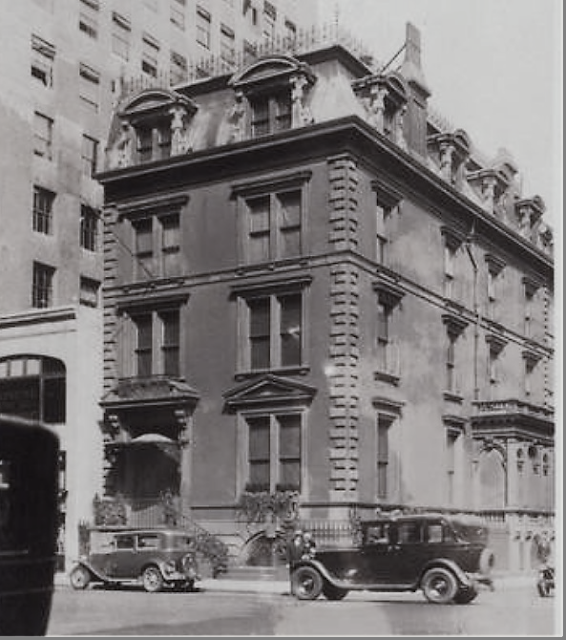 from the collection of the New York Public Library
On January 24, 1921, the New York Herald reported, "Mr. Moses Taylor Pyne, who has been seriously ill at his home, 263 Madison avenue, has had a slight change for the better."  He would never truly recover, however, and he died in the house on April 22 of bronchial pneumonia.
According to The New York Times on May 5, "the total fortune left by Mr. Pyne was about $100,000,000."  That figure would translate to $1.45 billion today.  His surviving sons, Percy and Moses, shared in the bulk of the estate, with Margaretta receiving Drumthwacket and the Madison Avenue mansion.  Princeton University received real estate and other gifts amounting to about $100,000.
Margaretta spent more and more time at the New Jersey estate.  Nevertheless, according to The New York Times, when real estate operators began buying up blocks of Murray Hill property for commercial development, she told a friend "I will never give up this house."
Margaretta's health began to fail in 1936.  She died in her Madison Avenue home on April 22, 1939 at the age of 83.  Percy, now the only surviving child, inherited the mansion.
On December 7, 1943, two years after America was pulled into World War II, The New York Sun announced, "The Pyne House, 263 Madison avenue, will be opened to men and women of the armed forces on Saturday by the war commission...which has leased the building for the duration as a fraternal center and canteen."  The residence now provided sleeping accommodations for 100 to 125 military personnel.  Overnight lodging and breakfast cost 50 cents.
The Pyne House, while still being operating as a military canteen, was sold in April 1946.  The new owner, said The New York Times, "plans to improve the corner with a new twelve-story business building for the textile trade."  The ambitious plans were scaled back, and a Modernist five story structure was completed on the site in 1949. 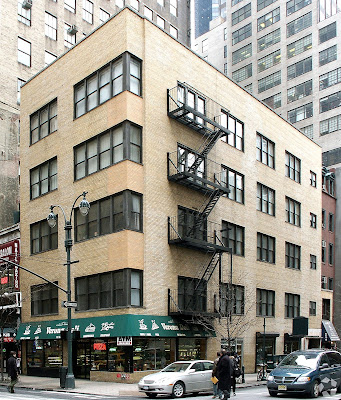 image via loopnet.com
LaptrinhX.com has no authorization to reuse the content of this blog
Posted by Tom Miller at 1:00 AM