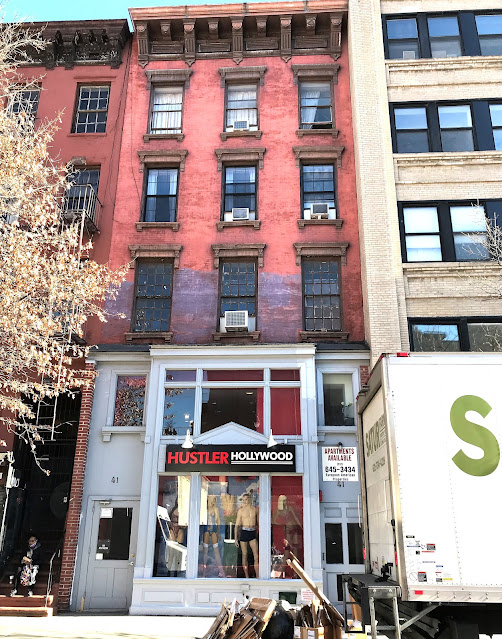 In 1844 William P. Furniss, a financier, completed construction of five 23-foot-wide homes along the north wide of Clinton Place between Fifth and Sixth Avenues.  (The section of 8th Street, between Fourth and Sixth Avenues, had been given the name in 1832, to honor former Govern De Witt Clinton.)   The identical Greek Revival residences rose three stories above an English basement.  That they were designed for well-heeled residents was evident in the auction listing of the homes on March 22, 1844.  Included in the amenities were a marble mantle in the "basement room."  This was the informal family dining room--the parlor floor dining room used only for entertaining.  There were "two fire places in the kitchen," which was "fitted with patent kitchen range."  The mention of "Croton boilers and pipe for baths in the second story" revealed that the houses had running hot and cold water.
The parlor floor woodwork was mahogany.  On that level was also the "butler room and closet."  There were four bedrooms, each with a marble mantel, and a bathroom on the second floor, and four more bedrooms on the third.  The bedrooms were "conveniently arranged with closets, clothes presses, &c."  The short, attic level was intended "for clothes, &c."
Among the row was 113 Clinton Place (renumbered 41 West 8th Street around 1900), which became home to broker Alfred Colvill.  Living with the family in 1848 was Jonathan McKeon, a former District Attorney, who worked at "New City Hall."
The Covills left Clinton Place in 1852 and their home became an upscale boarding house.  Interestingly, Jonathan McKeon remained, at least through 1854.  And advertisement in the New York Herald on October 13, 1853 offered:

Board--Several gentlemen may have pleasant and well furnished rooms at 113 Clinton place, between Fifth and Sixth avenues.  Those who desire to locate permanently, may find here, at a comparatively low price, the comforts of a first class hotel, without its inconvenience.

The Quill, A Magazine of Greenwich Village, June 30, 1917 (copyright expired)
The estate of John Sullivan sold the house on June 16, 1919.  By then Greenwich Village, especially the area surrounding Washington Square, was the center of Manhattan's artistic community.  The building was renovated into a "studio apartment house," its upper floor spaces intended for artists.
In 1923 Anne Sprague McDonald, the American representative of Italian author Luigi Pirandello lived here.  On the third floor was the studio of artist Burton Rice.  Other tenants were Mrs. Emma von Zeitler, who lived in the rear apartment on the second floor; and the French puppeteer and marionette maker, Jean Gros.  Gros was famous for his transforming popular plays--like Huckleberry Finn and Alice in Wonderland--into puppet shows.  His productions involved as many as 150 different characters, controlled by 2,000 strings.
On November 17, 1923, The New York Times reported, "Three spectacular rescues were made at a fire which destroyed the studio apartment house at 41 West Eight street yesterday."  Emme von Zeitler had smelled the odor of burning rubber.  When she opened her door she was nearly overcome by a cloud of smoke.  The New York Times said, "She slammed the door and ran through the apartment to the front, shouting 'Fire!"
The flames spread rapidly through the upper floors, trapping some occupants.  Emma von Zeitler climbed onto the window sill and was about to jump, until a neighbor from another building inched along the ledge above the entrance and held onto her until fire fighters could arrive.
Burton Rice was teaching H. L. Graf, Gertrude Euphrate and Edith de Tackas in his third floor studio.  He opened his window and "climbed out on the ledge and swung over to a fire-escape."  The fire escape was not connected to the building.  A man rushed up the escape to help.  "Graf, with the man holding him around the waist, leaned over and assisted the girls to the fire-escape and then led them to the street," said the article.
Jean Gros was not at home.  The fire swept through his studio, destroying 200 marionettes.  The blaze spread so rapidly that Anne Sprague McDonald had no time to gather anything, including "valuable manuscripts owned by Luigi Pirandello."  The New York Times reported that McDonald "said she had the papers in her room, but could not stop to get them."
In repairing the fire damage, the stoop was removed and the commercial space enlarged to two floors.  It became home to Helen Cramp's Kraftwoven Shop.  By 1924 it was being run by Mollie Belcher Chambers. 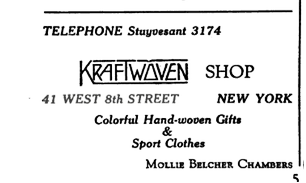 The Quill, December 1924.
With Prohibition ended, the commercial space became the New Trocadero restaurant.  On New Year's Eve 1935, patrons paid a flat charge of $5 for the evening.  The eatery remained until 1941 when Christos Bastis opened the Sea Fare restaurant in the space.
On January 13, 1942 food critic Charlotte Adams wrote in the newspaper PM, "A number of people have been telling us for several weeks that there is a wonderful little new seafood restaurant on Eighth St., and we ought to go down to try it."  And so she did.
The menu said it provided "delicacies from the blue deep for sophisticated epicures."  Adams was impressed.  "While you will find listed all the usual things for such a place and we're sure they've done well, you will also find dishes of fish in unusual sauces which are beautifully cooked.  This is not usual."
In one of the upstairs studios painter, muralist and sculptor Stepan Lazarev lived and worked for years.  Born in France, he taught art in Paris before coming to New York and establishing his studio here.
The Sea Fare restaurant remained here until 1957, when it moved across the street to 44 West 8th Street.  William Grimes, writing in The New York Times years later recalled, "At a time when the typical American seafood restaurant was a lobster shanty decorated with nets and cork, Mr. Bastis saw an opportunity to serve traditional Mediterranean seafood dishes in elegant surroundings and to broaden the taste of his customers by presenting them with new kinds of fish."
The new tenant of the store space could not have been more different.  Record Centre was among the only stores in Manhattan to offer imported LP discs of classical music.  Writing in the February 1961 issue of HiFi/Stereo Review, David Hill said, "Side by side with the familiar RCA Victor, Columbia, Mercury Capitol and Vanguard labels we find such exotic trademarks as Erato, Harmonia Mundi, Pye, Triola, Metronome, Danish Odeon, Cante, Lumen, Musica Sacra, and Fona--to name only a few."
A renovation completed in 1989 resulted in a restaurant on the ground floor, and a single apartment on the fifth.  The Department of Buildings noted that the second through fourth floors were "to remain vacant."  That changed in 2016 when a another remodeling produced a retail space on the ground floor, offices on the second, and one apartment each on the upper floors.
photograph by the author
no permission to reuse the content of this blog has been granted to LaptrinhX.com
Posted by Tom Miller at 1:00 AM