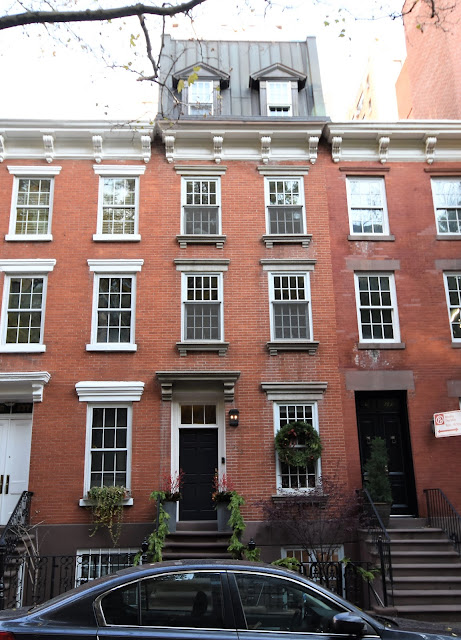 East 78th Street was opened in 1861, the year that war broke out in the South.  With much of New York City's working class off fighting, construction in Manhattan ground to a near halt.  Then, shortly after peace was declared in 1865, work began started on a row of brick-faced homes on East 78th Street between Second and Third Avenues.   Although three stories tall over a brownstone-clad basement, their mere 13-foot width reflected the economic class of the potential owners.  Yorkville was greatly populated by working class immigrants--Irish and German mostly--many of them hired to build the Croton Aqueduct.
Among the row was 239 East 78th Street, which, like its neighbors, displayed elements of the Italianate style--like the bracketed cornice and full-height third floor.  It became home to the family of Joseph Solomon, a jeweler and appraiser with an office at 735 Broadway.  The Solomons remained until 1870.
The Gerstle family followed the Solomons in the house.  Interestingly, both Henry and his wife, Mary H., were listed as proprietors of a garment trimmings firm, at 7 Mercer Street.
Rachel Milius leased 239 East 78th Street in 1878.  Born Rachel Esther Wolf, her husband, Ferdinand, had died around 1869.  Both she and Ferdinand were born in Bavaria.  It  is unclear how many of their seven children moved in with her, but certainly 20-year-old Julia did.  On February 15, 1880 the house was the setting of her marriage to J. H. Himmelrich.
Three years later the house was listed for rent again.  (Rachel moved just over a block away to 182 East 79th Street.)  The advertisement read, "Small House--239 East 78th St., 10 rooms; all improvements; rent $55."  The rent would equal about $1,470 today.
The Clearman family lived here in the 1890's.  The family (and the neighborhood) got exciting news in May 1894.  The Evening World reported, "Willis Clearman, aged twenty-one, of 239 East Seventy-eighth street, a graduate of School 35, is the alternate for the West Point appointment."  It was an astounding accomplishment for the public school educated young man.
The following year Nathan Mayer purchased the house for $8,000 (just under $255,000 today).  Although Mayer was a real estate operator, this purchase was for his own use.  Unfortunately, the Mayer family's residency would be tainted with sorry.
Nathan's widowed father, August, lived with the family.  Born in Frankfort, Germany, he had come to America in 1847 and moved West where he was the sheriff of Milwaukee, Wisconsin.  He returned to New York City in 1870, setting up his law practice, finally retiring in 1882.
Both the father and son were members of the International Order of B'nai B'rith, as well as other fraternal societies.  August had suffered from "bladder problems," according to the New-York Tribune, and underwent an operation the year the family moved into the East 78th Street house.  His condition gradually returned and in July 1897 he "took to his bed."  He died a month later, on August 28.  His funeral was held in the house on August 31.
Only five months later another funeral was held here.  Nathan's brother, Henry Mayer, died on January 12, 1898, and his funeral was held two days later.
The Mayer family left around the turn of the century.  On October 15, 1904, Harry C. Stanley married Catherine T. Kenney, who, according to the Daily Star, "comes from a well-to-do and highly respectable family living in a fine short-front home at Bay Ridge, Brooklyn."  Harry brought his bride to 239 East 78th Street to live.
Catherine soon became pregnant, but her joy would be soon dashed.  Harry Stanley was keeping a deep secret from his wife, and it all began to unravel in April 1905.
Charles R. Mammel had been arrested for having stolen luggage from the baggage room of the Long Island Railroad depot several months earlier.  Mammel and his wife, Alice, lived in Astoria, Queens.  But investigators discovered a second address for him at 239 East 78th Street.  Here, they found "not only a quantity of the stolen plunder, but another wife, who, it seems, Mammel also unlawfully annexed."
The second wife, of course, was Catherine Stanley.  The Daily Star said, "His alleged robberies were absolutely unknown to her until the time of his arrest.  The shock of that event made her seriously ill, an illness that was particularly serious as she was about to become a mother."  Equally stunned was Alice Mammel.  The Daily Star reported that she "had hardly recovered from the shock of her husband's arrest on the robbery charge when she was amazed to learn that she was not the only wife of the recreant young man."
Alice sued for divorce and Catherine appeared in the courtroom as a witness.  "During the hearing of the divorce case, she identified a photograph of Mammel as that of Stanley, the man who married her."  Calling Stanley "good looking and of ingratiating manner," the Daily Star pinpointed the cause of the wayward man's problems.  "Cigarettes are said to be the cause of his down-fall." 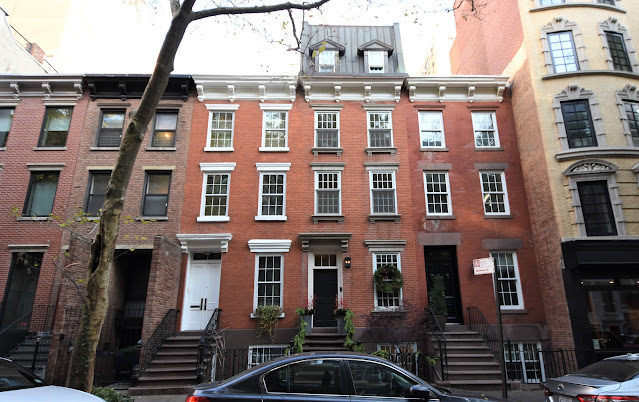 A mansard level was added in 2002.
William and Magdaline Perlitz purchased the house in 1906, and William immediately applied for a permit "to keep chickens" in the rear yard (it was approved).  Their young son, William, Jr. was hailed as a hero on July 20, 1918.
William was standing on East 79th Street near the East River that Saturday afternoon, watching a group of boys swimming.  The Evening Capital noted, "The current is very strong there and is considered a very dangerous place.  The boys are forbidden to swim there."  Suddenly, one of the boys went down for the second time.  William jumped into the river, fully clothed, grabbed the boy, and pulled him to shore.  The newspaper said "his friends here have listed him in the hero class."
By 1958 the house was home to Charles and Yuriko Kikuchi and their two children, Susan and Lawrence.  Living with the family was Yuriko's mother, who helped with her grandchildren and with the cooking.
Known by audiences only by her first name, Yuriko had spent two years in a Japanese-American internment camp in Arizona.  Upon her release she came immediately to New York City and joined the Martha Graham Dance Company.  She would be with the company for the next 50 years. 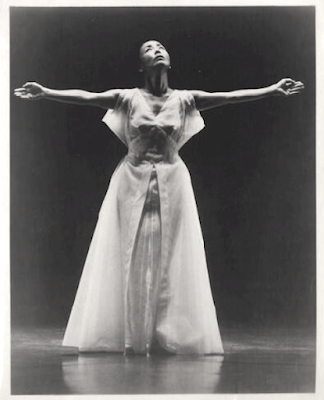 from the collection of the Library of Congress
In addition to her modern dance, she performed on Broadway.  She was in the original productions of the 1951-54 The King and I, and the 1958-60 Flower Drum Song.  In her 2021 book Not Yo' Butterfly, actress Nobuko Miyamoto recalls:

Their brownstone was a charming old four-story house on a tree-lined street at 239 East 78th Street, which was on its way to being upscale.  The floors were creaky and the walls crooked, but Charlies had built a beautiful traditional Japanese room on the second floor, with a real tatami floor where shoes were forbidden.  I remember a party they gave for distinguished Japanese Kabuki actors from Japan after their new York performance.  By two in the morning, with sake flowing, the vibe of that Japanese room transformed the normally reserved Kabuki players into drunken wild men dancing out into the street.  The cops came and Yuriko had a lot of explaining to do to keep their guests out of jail.

A renovation completed in 1960 resulted in a two-family home--a triplex in the basement through second floor and an apartment on the third.  The house was returned to a single-family home in 1976, and then in 2002 an additional floor in the form of a mansard was added. 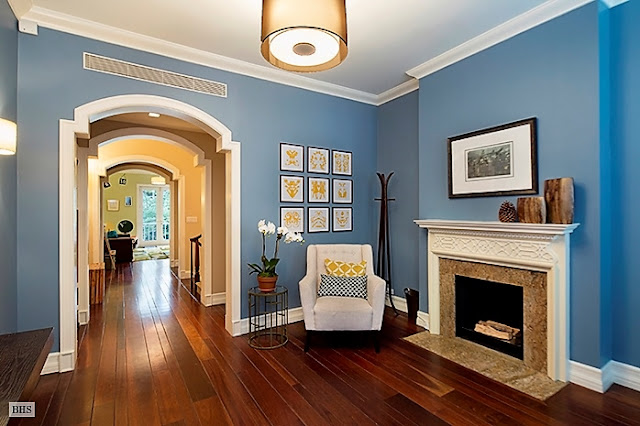 image via bhsusa.com
photographs by the author
LaptrinhX.com has no authorization to reuse the content of this blog
Posted by Tom Miller at 1:00 AM