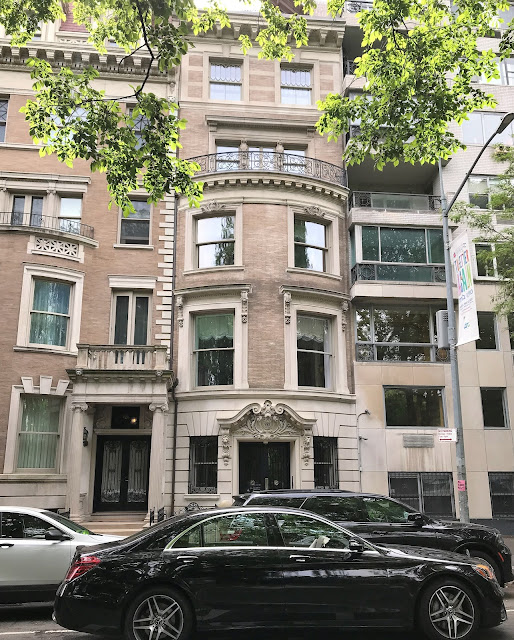 In 1898 corporate attorney John Woodruff Simpson purchased the two abutting plots at 925 and 926 Fifth Avenue, between 73rd and 74th Streets, and hired architect C. P. H. Gilbert to design two lavish homes on the sites.  One, 926 Fifth Avenue, would be for Simpson and his family, while the slightly narrower 925 was intended as an investment.
Completed in 1899, the mansions were architecturally harmonious, yet distinctly different.  Gilbert gave 925 Fifth Avenue a three story, bowed bay that provided an ample, iron-railed balcony to the fourth floor.  The entrance, centered within the rusticated limestone base, was embellished with an elaborate swans neck pediment.  Clad in beige brick above the ground floor, the house rose five stories. 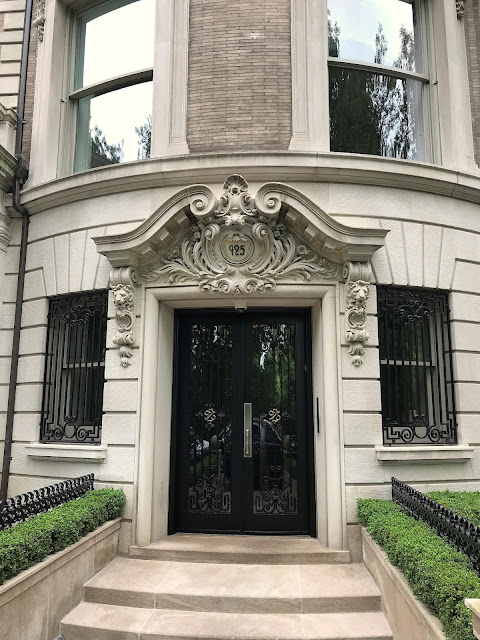 The construction of 925 Fifth Avenue cost Simpson $45,000, or about $1.45 million in 2022 dollars.  He sold it to Herbert Leslie Terrell and his wife, the former Mary Elizabeth Wood.
Born on October 5, 1842 in Ohio, Terrell had graduated from Yale University and practiced law in Cleveland until 1879.  That year he became General Counsel for the New York Chicago and St. Louis Railroad and moved his family to New York City.  He was, as well, a director in several corporations and a part-owner of the Continental Tobacco Company.  The couple had two daughters, Elizabeth and Bertha, and maintained a country home, Seacroft, in Seabright, New Jersey. 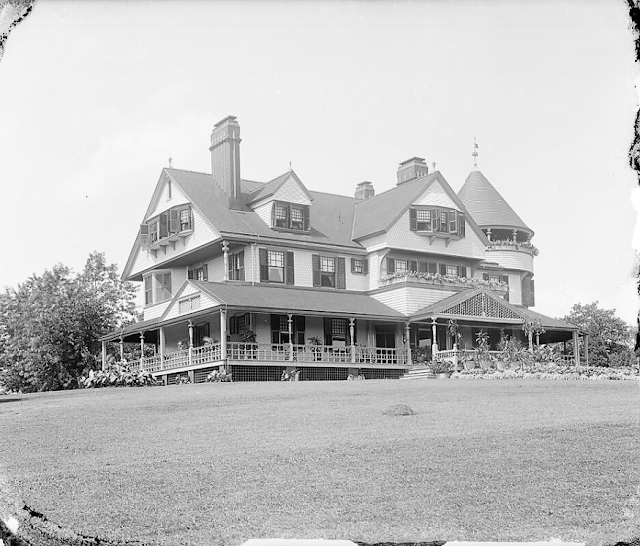 The Terrells spent their summers at Seacroft, a sprawling Queen Anne Shingle Style mansion.  from the collection of the Monmouth County Historical Association
By the time the family moved into 925 Fifth Avenue, Terrell had essentially retired, and now focused on his clubs (he was a member of the Union League, the Manhattan, the New York Athletic, the Lotos, the Lawyers', and the New Clubs).  In 1891 The University Magazine commented, "The versatility of his mind and the wide range of his tastes, are evident from his membership in several scientific societies." 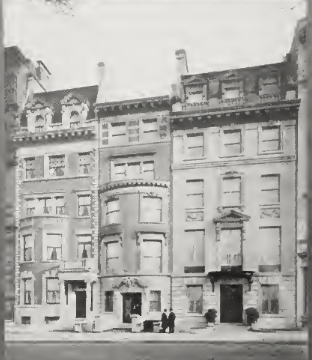 The John W. Simpsons lived on the north side (left) of the Terrell mansion.  To the south was the home of General Henry Warren.  Collin's Both Sides of Fifth Avenue, 1910 (copyright expired)
The Terrells had a well-known art collection and the Fifth Avenue mansion was filled with masterpieces.  Among the artworks that hung on its walls were Rembrandt's Portrait of Himself, Sir Joshua Reynold's Lady Frances Finch, Thomas Gainsborough's Portrait of Isabel Howland, and Henri Regnault's Automedon and the Horses of Achilles.
Terrell's last additions to his collection were personal.  In 1909 he commissioned a portrait of Mary by artist Philip de László.  Shortly after its completion, De László painted a companion portrait of Terrell. 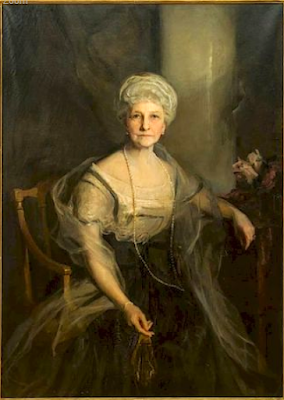 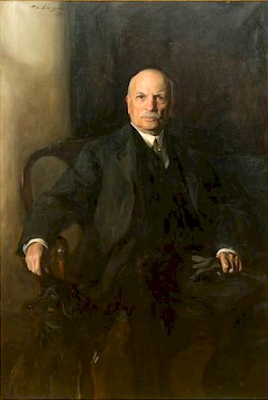 The Philip de László portraits were completed in 1909, the year Terrell died.  images via bidsquare.com
It is possible that Terrell never saw his completed portrait.  He died at the age of 67 in the Fifth Avenue mansion on November 9, 1909.
Mary remained in 925 Fifth Avenue and at Seacroft.  Her extensive wealth was reflected in a notice she placed in the New York Herald on March 2, 1912:

$500 reward for platinum and diamond Chain and black enamel and diamond Watch, lost March 1, on 5th av., between 50th and 75th sts.

The New York Herald explained, "Mrs. Terrell left her home in an automobile at half-past twelve o'clock to go to the Plaza Bank, at Fifth avenue and Sixtieth street.  She returned home an hour later and discovered her loss.  The watch and chain had been specially made for her and were set with many jewels."  The reward she offered would be equal to $13,800 today.  She valued the watch at $68,800 in today's money.
Mary Elizabeth Wood Terrell died in her Fifth Avenue mansion on October 22, 1924 at the age of 79.  Her funeral was held in the drawing room two days later.
The former Terrell mansion became home to Barrington Moore and his wife Muriel Hennen.  Moore, a son of Clement Clarke Moore, was a forestry researcher.  The couple, who had two sons, Barrington, Jr., and Peter Van Cortland, were visible in society.  On February 11, 1926, for instance, The New York Sun reported, "Mr. and Mrs. Barrington Moore will give a dinner, followed by music, at their home 925 Fifth avenue, on February 21."
But things were not going well behind the scenes between the Moores, and they separated in 1927.  The house became home to Reid Langdon Carr and his wife, the former Eleanora Frederikson.   An attorney, Carr was born in Cornwall, Vermont on October 20, 1880 and graduated from the New York Law School in 1903.  He and Eleanor had married on February 4, 1916.
That same year the Carrs moved into 925 Fifth Avenue, they tried out a new summer spot, East Hampton, Long Island.  On July 13, 1928 The East Hampton Star reported, "Mr. and Mrs. Reid Langdon Carr, of 925 Fifth Avenue, New York, are newcomers in the summer colony here this year, occupying the house belonging to the F. G. Potter estate."  East Hampton passed muster and the Carrs spent their summers there for years.  They never acquired their own estate there, however, preferring to rent.
Living with the couple in 1940 was Eleanora's 93 year old widowed mother, Carolina Fredrikson.  The family had three live-in servants at the time, Sigred Harmen, Julia Sheehy, and Anthony Forgione, the butler.
Although the Carrs had no children, the Fifth Avenue house was the scene of at least one wedding reception.  Yolanda Risacoli Benjamin was married to Theodore Ridgway Jaeckel on April 5, 1940.  The New York Sun noted, "A reception will follow at the home of Mr. and Mrs. Reid Langdon Carr of 925 Fifth avenue, long-time friends of the Benjamin family."
Reid Langdon Carr died of a heart attack in the Fifth Avenue house on October 7, 1948 at the age of 67.  His funeral was held in the drawing room at 10:00 on the morning of October 11.  In his memory, Eleanora erected Carr Hall at Middlebury College in Vermont, which was completed in 1951.
The Italian Government purchased 925 Fifth Avenue as home to its Ambassador to the United Nations.  Egidio Ortona and his wife hosted a black-tie dinner here on October 3, 1959 in honor of the visiting Italian Prime Minster Antonio Segni and his wife.
In 1976 Piero Vinci was the Ambassador.   While he was in Rome that year, his wife spent the first weekend in September in Southampton, Long Island.  The only person left in the mansion was the custodian.  On Saturday night, while he was sleeping on the top floor, burglars entered the house, making off with four rugs, jewelry and silverware.  The rugs alone were valued at nearly $91,000 by today's standards. 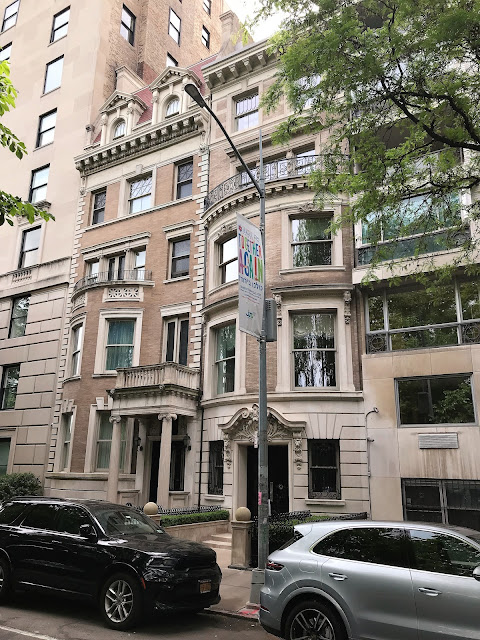 The mansion became home to billionaire Leonard Norman Stern and his wife, Allison Maher, shortly after their marriage in 1987.  He was the chairman and CEO of the Hartz Group, makers of the Hartz Mountain pet products, founded by his father.  Max Stern had started out in business by importing 2,100 canaries from Germany to sell in the United States.  His Hartz Mountain Corporation was named after the Hartz Mountains in his native Germany.  The Sterns still maintain 925 Fifth Avenue as their private home.  It and the former Simpson mansion are the last remnants of Gilded Age Fifth Avenue along the block.
photographs by the author
LaptrinhX.com has no authorization to reuse the content of this blog
Posted by Tom Miller at 1:00 AM