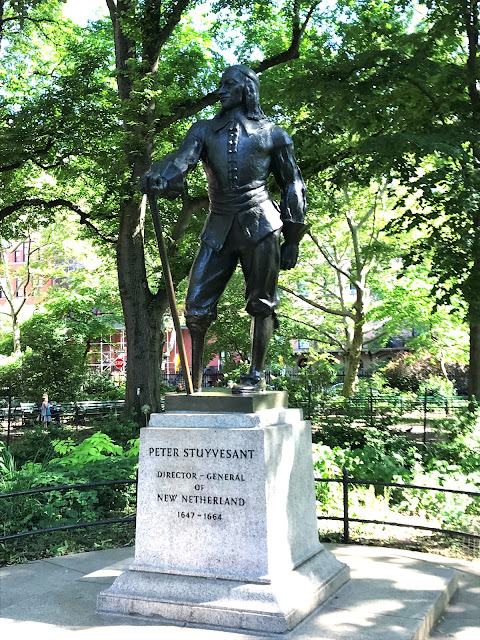 Peter Stuyvesant, the Director General of the West India Company in New Netherlands, purchased land for his farm, or bouwerij, far to the north of the settlement on March 12, 1651.  By the time of the American Revolution the land had been handed down to Peter’s great grandson Petrus who, on November 30, 1787, commissioned Evert Bancker, Jr. to survey and plot out the still verdant farmland into building plots and streets.

Petrus's son Peter Gerard Stuyvesant and his wife, Helen, sold four acres of the former farm to the City of New York for $5 in 1836 for use as a public park.  By 1848 Stuyvesant Park was girded with a handsome iron fence, and two decorative fountains played among landscaped gardens.
Nearly a century later, on June 17, 1936, The New York Sun reported, "Mrs. Harry Payne Whitney has been selected to carve the statue of Peter Stuyvesant, which is to be placed in Stuyvesant Square under the auspices of the Netherland-American Foundation."  The chairman of the project's committee, Mrs. A. Barton Hepburn, said, "As a sculptor of outstanding accomplishments and as a member of an old New York family of Dutch descent, she is admirably equipped to recreate the figure of the city's colorful Governor."
Indeed, Gertrude Vanderbilt Whitney's earliest ancestor in America was Jan Aertszoon Van der Bilt, who arrived in New Netherland in 1650.  She was the daughter of Cornelius Vanderbilt II and Alice Claypoole Gwynne.  Importantly, despite her family's decided non-support, she was a recognized sculptor with a well-known studio in Greenwich Village. 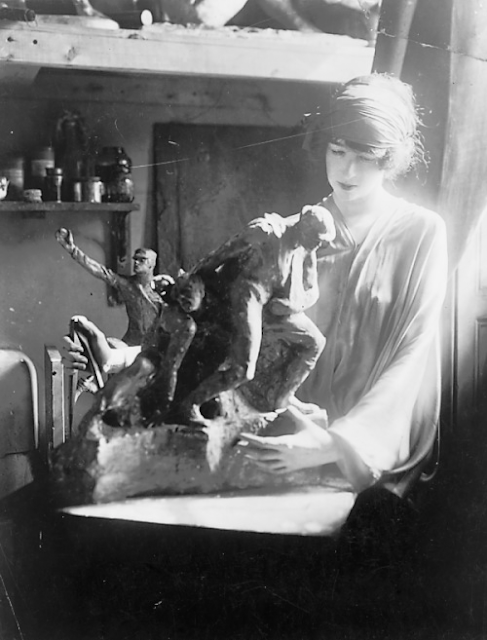 Gertrude Vanderbilt Whitney in 1920.  She once said her husband viewed her art as "an annoyance."  from the collection of the Library of Congress
The Netherland-American Foundation had decided to erect a statue of Stuyvesant to aid in the rehabilitation of the Square.  Mrs. Hepburn told The New York Times that the park "though rich in traditions, has been fast losing its identity."  She added that Parks Commissioner Robert Moses "is in sympathy with the undertaking and has promised his help."
All designs for public art were required to be approved by the Municipal Art Commission.  Whitney faced a major problem as she started her drawings--Peter Stuyvesant's well-known wooden leg.  On April 15, 1937 The New York Sun wrote, "For many years opinion as been divided about which of Stuyvesant's legs was the peg-leg."  Whitney sought the help of Dr. Victor Hugo Palsits of the New York Public Library who searched deep into the archives and came up with evidence nearly 300-years old.  A letter written to Stuyvesant by a friend in 1664 sympathized with him "on the loss of his right leg at the siege of St. Marin in the West Indies," said The New York Sun.
With the mystery solved, Whitney completed her drawing, which was approved by the Municipal Art Commission in April 1937.  She agreed to execute the monument free of charge.
Three years after the project was conceived, the statue was completed.   But it had an important stop to make before being placed in Stuyvesant Square.  It was placed directly in front of the Netherlands' Pavilion at the New York World's Fair.

Gertrude Vanderbilt Whitney (center) poses with Thomas J. Watson and Madame Louden, wife of the Dutch Minister to the United States during the dedication ceremonies of the Netherlands Pavilion.  Cohoes New York American, May 1, 1939
Following the Fair, the life-size bronze statue was relocated to Stuyvesant Square park.  Its pedestal had been designed by the architectural firm of Noel & Miller.  (Auguste L. Noel had designed Gertrude Vanderbilt Whitney's Whitney Museum of American Art on West Eighth Street.)  It was unveiled on June 5, 1941 by the wealthy and reclusive Augustus van Horne Stuyvesant, the last surviving descendant of Peter Stuyvesant. 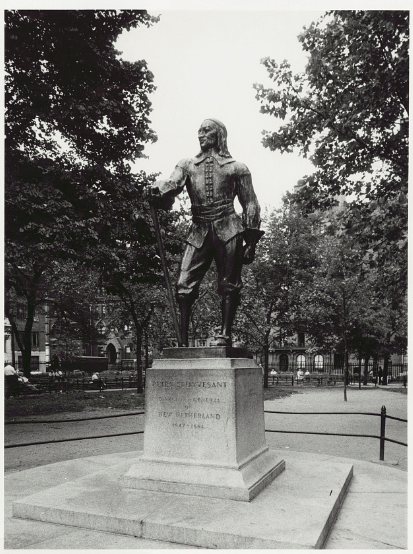 from the collection of the Library of Congress
The statue stood quietly in the park, drawing little attention, until the tragic and fatal demonstrations in Charlottesville, Virginia in August 2017.  The racist-spurred deaths sparked a movement to eliminate memorials with connections to racism, Confederates, or slavery.  Proponents demanded that all statues--no matter their artistic importance, how distinguished the artist, or what positive accomplishments the figure had contributed to society--be removed if slavery was involved.   The movement is denounced by many who warn that an attempt to erase history because we find it uncomfortable or abhorrent, is a dangerous and slippery slope.
Peter Stuyvesant had owned an estimated 40 slaves 400 years ago.  In 2020 Paul Newell, a Lower East Side Democratic district leader pushed for the removal of the Stuyvesant statue, telling The Village Sun's Lincoln Anderson, "He was also, by all accounts, just a nasty arrogant jerk." 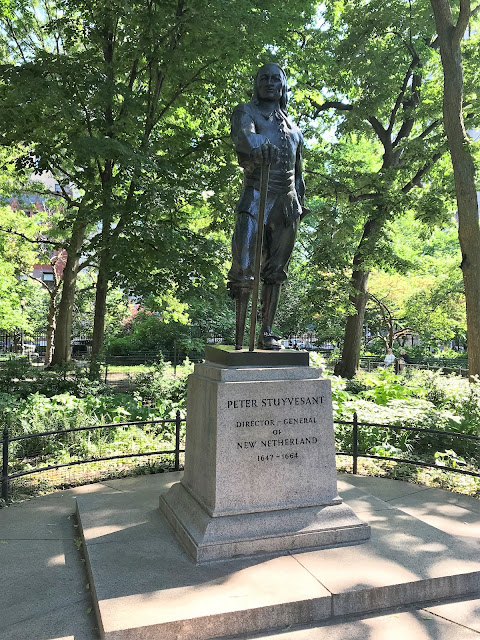 In the meantime, the work stands, so far, unperturbed in its leafy setting, an important work by one of America's most prominent female artists and patron of modern art.
photographs by the author
LaptrinhX.com has no authorization to reuse the content of this blog
Posted by Tom Miller at 1:00 AM