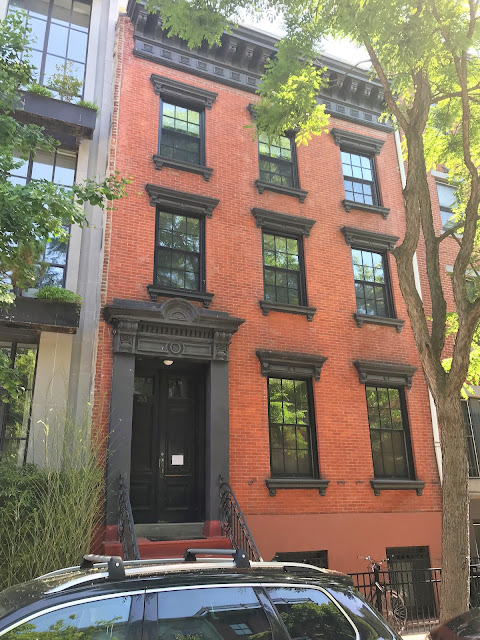 In 1843 a row of fine three-story, brick-faced homes was completed on the north side of Seventh Street between Avenues C and D.  Although generally Greek Revival in style, they showed the influence of the rising Italianate style.  The top stories, for instance, normally decidedly shorter than the others in Greek Revival design, were full height.  The residences sat just over a block from the East River in the neighborhood known as the Dry Dock District, where ships were built.  Not surprisingly, many of the initial residents of the block were involved in the industry.

Shipwright William Darwin Niles purchased 263 Seventh Street (the "East" would come decades later).  Shipwrights, who oversaw the entire construction of a ship, including the internal fittings, were highly paid, affording Niles the financial wherewithal to purchase the new house.
Niles and his wife, the former Melinda Seeley, had four children, Welcome David, Franklin David, Melinda, and Amanda.  Boarding with the family was a ship's carpenter, James A. Lewis.
Most likely both of the Niles daughters were school teachers prior to their marriages (women were expected to give up their professions upon marriage).  Melinda was a teacher in Public School 16 on 5th Street, between Avenues C and D in 1849 and 1850.
The population of 263 Seventh Street increased by two in December 1852.  That month Amanda married Joseph Van Vleck, a bookkeeper, and Melinda married Thomas J. Clarke, a machinist. 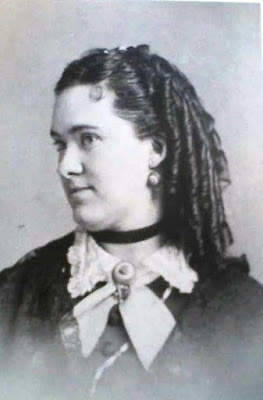 Amanda Niles Van Vleck, image via WikiTree.com
It is unclear how many children Melinda and Thomas Clarke had, but something--possibly a disease like cholera or small pox--claimed them all.  The last, Franklin Niles Clarke, died on December 2, 1859.  The Family Herald called him the couple's "youngest and only remaining child."
There would be two more funerals in relatively quick succession in the parlor of 263 Seventh Street.  On June 7, 1860, Welcome David Niles died at the age of 44, and two years later, on October 21, 1862, William Niles died at 72.
The family left the East Second Street house in 1867.  Interestingly, three years after Amanda's death in 1883, Melinda (who was now a widow), married Joseph Van Vleck, her former brother-in-law.
The house saw a succession of residents over the next decade, including merchant Seligman Solomon; George Rothstein, a bookseller; and attorney Jacob L. Michaels.  Michaels died "suddenly" in the house on November 17, 1874 at the age of 33.  The term most often referred to a heart attack, but Michaels's age suggests another cause.
Aaron Bamberger, a prominent figure in the Jewish community, purchased 263 East 7th Street in 1879.  He lost it to foreclosure in 1886, and it was purchased at auction by Peter and Ellen A. Caffrey.   The couple had been married the previous year, and it was almost assuredly the Caffreys who updated the house with bold, modern touches.  The entrance was given new paneled doors, and an ambitious cast iron lintel was placed over the Greek Revival entablature.  The windows received new cast iron lintels and sills, and a modern cornice was installed. 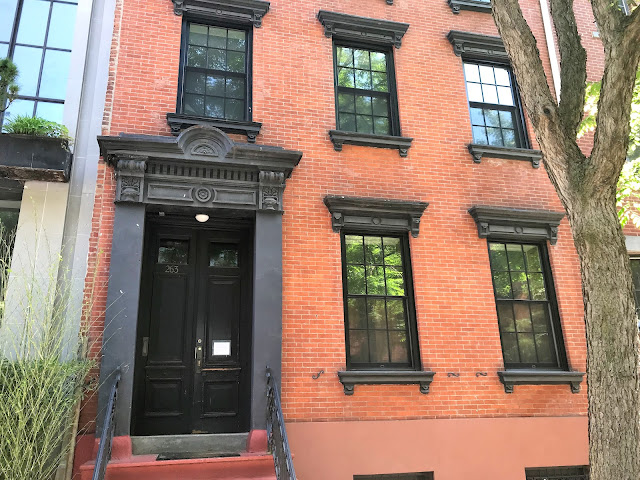 Stylized urns of flowers decorate the brackets over the entrance.
It is unclear whether Hugh Clark and his wife, Margaret, were related to the Caffreys, or if they were merely boarders.  In either case, they moved in at the same time.  Clark was a sergeant with the police force.
Hugh Clark nearly died in 1890 when "the grip raged," as worded by The Evening World.  The term referred to what today is known as influenza.  "The disease developed into pneumonia," said an article several years later, "which so weakened his lungs that he had frequent hemorrhages." 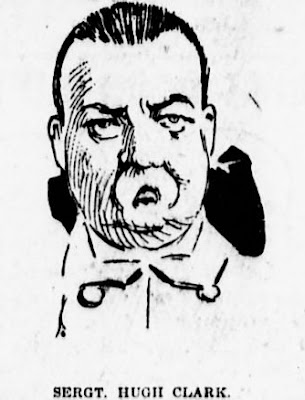 Hugh Clark, The Evening World, December 22, 1894 (copyright expired)
On August 9, 1894 Hugh Clark received a letter from William H. Kipper of the Police Department's Superintendent's Office.  It began, "Sir--Take notice that charges have been preferred against you to the Board of Police of the Police Department of the city of New York."  He and five other sergeants of the East Fifth Street Stationhouse were accused of accepting protection payments from Madame Augusta Thurow, who ran a brothel.
Clark was subsequently arrested, and on October 20, 1894 The Evening Post reported that Peter Caffrey had posted his bail.  Clark was allowed to retire on half pay.  The Evening World explained that the Commissioners "considered this punishment adequate in view of his long and faithful service."
Clark was still battling his lingering lung problems.  On December 21, he "took outdoor exercise," according to The Evening World, "and appeared to be better."  But around midnight he "felt a choking sensation."  The family doctor was called, but  nothing could be done.  Clark died "from suffocation."
Margaret stayed on with the Caffreys at least through 1897, receiving her husband's $300 per year pension (about $9,660 today).
Ellen Caffrey died in 1911.  Her cousin, a Mrs. Daly, moved into the house to keep house and care for Peter, until her sudden death in July 1912.  Peter found a new housekeeper in November that year in Annie O'Neill.  At one point he told his nephew, Thomas F. Caffrey, "that he had made a new will now that Nell was gone," according to Caffrey later.  "That was his wife," he explained to a judge, "and [he] left everything he had to our family, and that he had named my brother Bernard and I as executors of the will."
Peter Caffrey died in the East Seventh Street house on November 16, 1913.   Following the funeral, the nephews returned to 263 East 7th Street and began to choose items as remembrances.  Annie O'Neill forbade them to touch anything in the house.  Peter Caffrey's will, it turned out, was not quite as he had explained it to his nephew.  He had left everything to Annie O'Neill.
Her windfall would be short-lived, however.  Seven months after Peter Caffrey's funeral, Annie O'Neill's was held in the parlor of 263 East 7th Street.  Her death triggered a court battle as the extended Caffrey family attempted to regain some of the property, including the East 7th Street house.
In the post-World War I years the former Caffrey house seems to have been operated as a rooming house.  It was the scene of a scare in the spring of 1921 when Jacob Lilling, a native of Kossuth, Hungary, stayed overnight with a relative on March 6.  Lilling had arrived in Philadelphia on the liner Rochambeau two days earlier.  The New York Herald reported, "He did not accompany the other Rochambeau passengers to New York, and so got into the city without the knowledge of the Health Department."
By the time of the article, Lilling was "seriously ill at Willard Parker Hospital," with typhus.  The East 7th Street house was "thoroughly fumigated" on March 7.  Health Commissioner Copeland used the incident to support heightened health control measures.  "Despite all our precautions even in New York city we feel the effect of the failure of Congress to appropriate money for effective quarantine protection."
The former Dry Dock District underwent urban blight in the second half of the 20th century.   Blocks of rowhouses were demolished for residential projects and once-proud homes were now severely neglected.  But then, on January 6, 1974, The New York Times columnist Carter B. Horsley reported on "the brownstone revival movement."  He interviewed Dr. and Mrs. Harry Baron, who lived at 268 East 7th Street.  Mrs. Baron said:

If you walk around you see an incredible number of gutted buildings and squatters.  The area between Avenue B and Avenue D is a no-man's island.  The reality quotient is high.  You just don't spring out of doors in the morning and say it's beautiful.

Nevertheless, the Barons intended to stay in their renovated home.  Now living in 263 East 7th Street were Ray Green, a musician and composer, and his wife, modern dancer May O'Donnell.  They had moved into the house in 1964.  Horsley said, "The Greens live...on a block that was once known locally as 'Artist's Row' and then as 'Rabbi's Row.'" 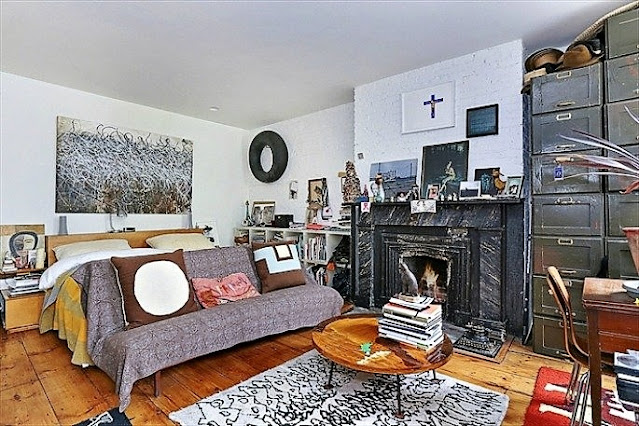 This Greek Revival mantel may be the sole surviving 1843 interior detail. image via 6sqft.com
Little by little, the process started by owners like the Barons and the Greens expanded.  In 2018, 263 East 7th Street was renovated into two luxury duplexes.  While almost all of the interior detailing is gone, at least one handsome yellow-veined black marble Greek Revival mantle survives.
photographs by the author
many thanks to reader Joe Ciolino for prompting this post
no permission to reuse the content of this blog has been granted to LaptrinhX.com
Posted by Tom Miller at 1:00 AM