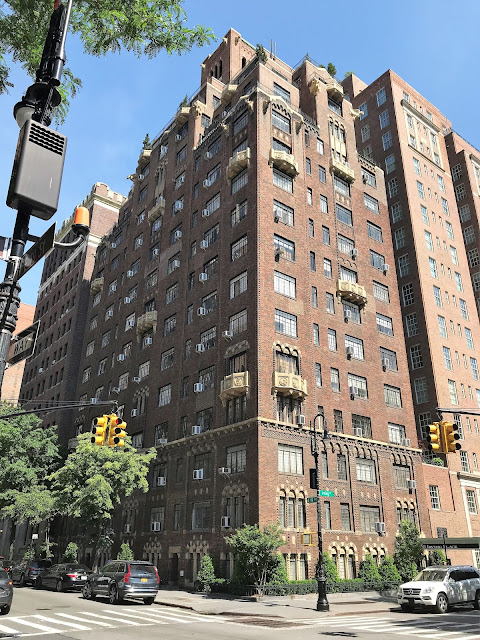 The upscale tenor of Gramercy Square (later Gramercy Park) spilled down the side streets.  In 1852 Richard S. Fellowes and his wife, Emma, lived in the commodious house at 81 Irving Place, on the northwest corner of East 19th Street.  By the first months of 1929, however, it was being operated as a rooming house.  That year developer Louis Cowan demolished it and the two abutting houses at 83 and 85 Irving Place, and hired architect George Fred(erick) Pelham to design an apartment building on the site.

The 58 year old Pelham was the son of architect George Brown Pelham.  His design for the Gramercy Square Apartments would be heavily influenced by Cowan, who had just returned from Europe.  On March 2, 1930, The Brooklyn Daily Times explained, "Mr. Gowan [sic] visited Italy last summer, bringing with him on his return a number of examples of Italian architecture, many of which were incorporated in the design of the structure."
Pelham's design was also partially governed by building laws.  Upon its completion, The New York Sun noted, "The structure is the first multi-family building to be finished in accordance with the provisions of the new multiple dwelling law," which demanded set-backs above a certain height.
The resultant 15-floor and penthouse edifice was a 1920's fantasy inspire by Northern Italian architecture.  Faced in variegated brown brick, the three-story base was lavishly decorated with terra cotta in the form of Renaissance style creatures, twisted engaged columns, shields and panels.  Creative brickwork created dimension, while small, leaded panes in the casement windows gave the impression of antiquity.  The upper floors featured romantic terra cotta balconies, and prominent gargoyles projected from the roofline. 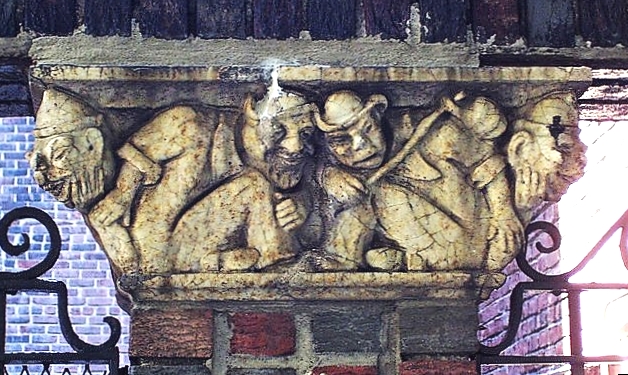 The facade holds a wealth of whimsical terra cotta ornamentation.  photo by Beyond My Ken
The Gramercy Square Apartments opened in October 1930.   The Brooklyn Daily Times said it met "the demand for medium sized housekeeping apartments" with its apartments of one to five rooms each.  The article noted that the set-back law created a positive.  "An advantage follows by allowing for garden and terrace treatment, the terraces conforming with dignity and good taste."  It added, "The building contains nine terrace suites with log burning fireplaces." 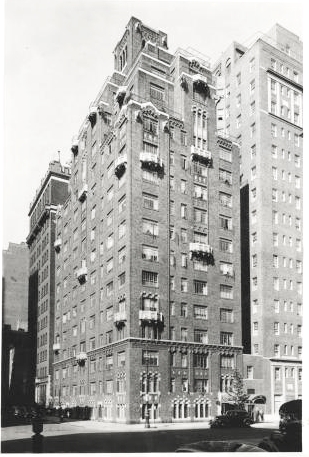 from the collection of the New York Public Library
Pelham's interior design included "Byzantine columns separating the foyer from the living room.  Safe and sane casement windows and built-in bookcases are also features."  The lobby and elevators were also described by the newspaper as "Byzantine." 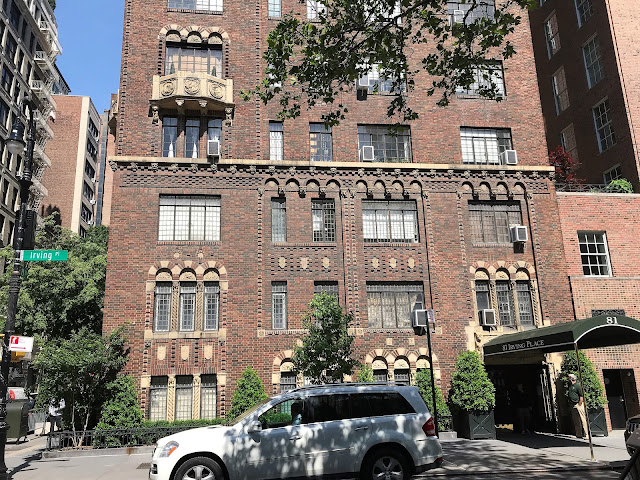 Among the early residents was burlesque queen, actress, author and playwright Gypsy Rose Lee, who moved into the Gramercy Square Apartments in 1933.   In her 2010 book American Rose, Karen Abbott writes:

She decorated the apartment herself, with just the slightest assistance from the antique dealers on Third Avenue.  It was an ebullient mix of periods and styles: blackamoors guarding the front door; a Chippendale sofa; a few chairs covered with her own needlework; Victorian settees upholstered in a muted salmon; crimson satin draperies held back by brass angels in flight.  Metal and plaster cherubs kept watch in every corner, and on the walls she hung a smattering of Charles Dana Gibson plates, a collage of her programs and press clippings, a series of Marcel Vertes watercolors (including several portraits of herself), a white elephant from Florenz Ziegfeld, and a hodgepodge of Victorian tattoo designs, all elaborately framed with colored velvet mattings and a wreath of gold leaf.

Author Carolyn Quinn suggests in her 2013 Mama Rose's Turn that Lee had a motive for finding her own apartment that year, separate from her mother.  She had met a married man, Eddie Bruns.  "The time had come for Gypsy to have a place entirely her own where she could entertain Eddie," she explains.  "She and Eddie would have plenty of privacy." 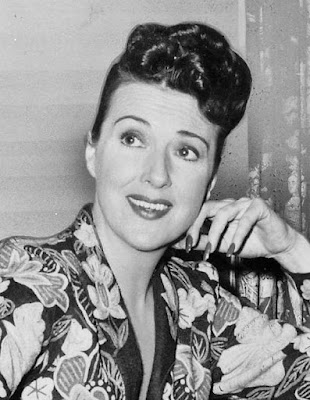 Gypsy Rose Lee, from the collection of the Library of Congress
Rent in the building at the time Lee moved in was "$50 up," according to an advertisement.  The cheapest rent would translate to about $966 per month today.
On March 13, 1938, another celebrity of sorts moved in.  Painter and author Wyndham Lewis was well known internationally both for his "Vorticism" art, and for his writings.  The year before moving into the Gramercy Square Apartments he published The Revenge for Love, regarded by many as his best novel.  He and his wife, the former Gladys Anne Hoskins, had married in 1930. 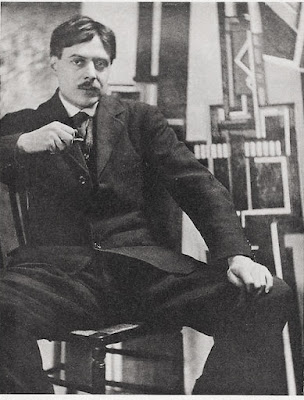 (Percy) Wyndham Lewis, from the collection of the Library of Congress
Lewis's biographer, Paul O'Keeffe, in his Some Sort of Genius, said apartment E-5 "would be recalled nostalgically from the austerity of postwar London as being just round the corner from Esposito's on Third Avenue where 'melons and things' could be bought."
More typical of the residents of the Gramercy Square Apartments were dentist Louis M. Goldschlag and his wife.  But while Dr. Goldschlag and his wife were financially comfortable, he was harboring perilous demons.  Mrs. Goldschlag was away from the apartment on January 29, 1939 and in her absence, Dr. Goldschlag snapped.  The Daily News reported, "After slashing his wrists in his fifth-floor apartment, Dr. Louis M. Goldschlag, 35...ran nude upstairs to the fourteenth floor and jumped to his death." 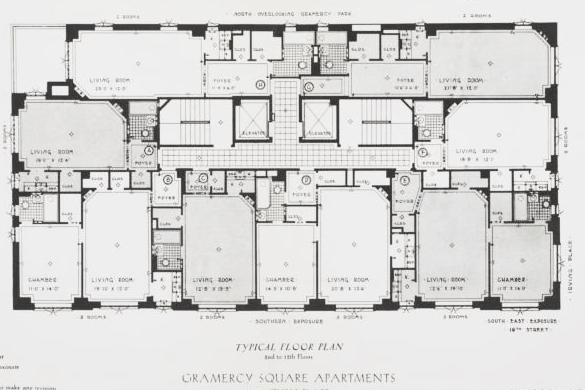 from the Gramercy Square Apartments brochure, 1930
On November 9, 1939, The New York Times reported, "Thorton Wilder, author, has taken residential quarters in 81 Irving Place."  A week later, on November 18, 1939, Wilder wrote a letter to Gertrude Stein and Alice Toklas, noting at the top, "My new apartment is: 81 Irving Place, New York City."  It said in part, "I've lived five days in my New York home and am already flooded with a new overwhelming feeling about New York."
When Louis Cowan sold the Gramercy Square Apartments in march 1942, The New York Times noted it "contains 207 rooms, divided into 108 apartments."
A unexpected touch of scandal visited the Gramercy Square Apartments in 1952.  Cedric Janien had earned the Navy Cross and Silver Star during World War II.   The 30-year-old, who was in the scrap metal business, was arrested by Government officials on June 6 along with mining engineer Guy Vincent, "charged with conspiring to transport and export gold bullion without a license," according to Newsday.  A Customs official had checked "two heavy boxes labeled 'costume jewelry and tie clips," to find gold bars worth a quarter of a million in today's dollars headed to Holland. 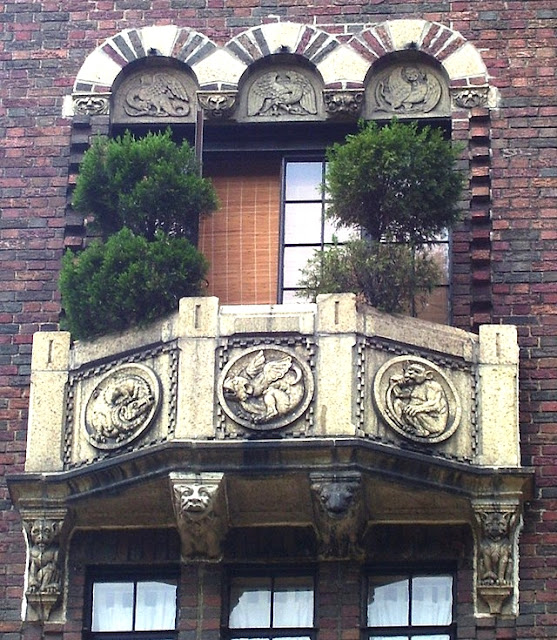 photo by Beyond my Ken
It would be five years before the smugglers--now totaling four--would be sentenced.  It appears that, in fact, Janien had been duped by the ring leaders, including Guy Vincent Chastenet de la Maisoneuve, the husband of actress Betsy von Furstenberg.  While the others received prison sentences, the Daily News reported on March 23, 1957 "Janien received a suspended six months sentence and was placed on probation for two years."
Resident Edward S. Wetherbee was arrested on October 22, 1958 for an even more surprising crime.  He and Joseph H. Grillo were charged with "running [a] 500-gallon-a-day still," according to the Daily News.  Their massive and clever operation ran from the basement of a building, accessed through a secret Prohibition-Era-type door disguised as a locker. 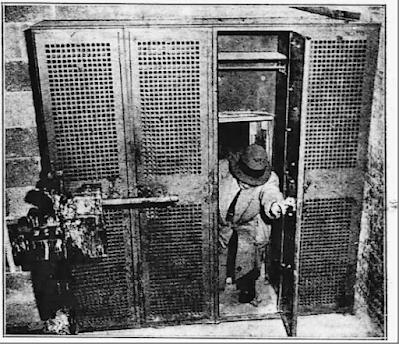 A Revenue agent enters the "locker" that led to the subterranean liquor operation.  The Daily News, October 23, 1958
By the 1960's Mabel E. Palmer was a resident here.  She had broken barriers as a young woman by becoming an attorney, and an associate in the law firm of Stickles, Hayden, Kennedy, Hort & Van Steenburgh.  She died at the age of 84 on November 15, 1971.
Another impressive resident was Eva Beraud Joly, the widow of Colonel Charles L. Joly, an Army engineer.  In the post World War I years she had been a fur designer and the chief buyer in New York and Paris for Revillon Frerers, a major fur retailer.  She remained here until her death in January 1974. 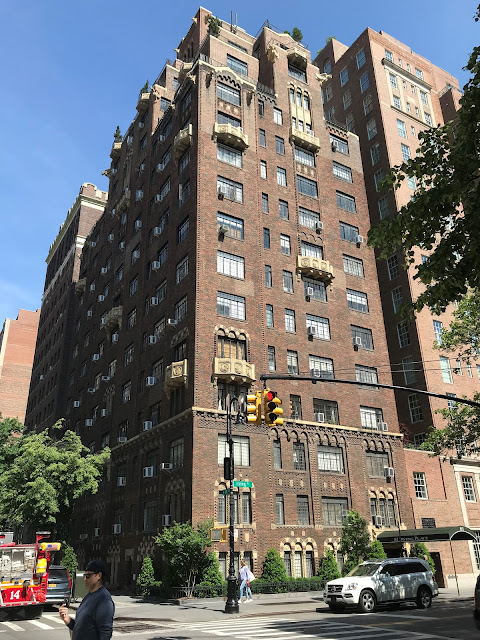 George Fred Pelham's picturesque 1930 building is essentially unchanged from the exterior.  Thankfully the casement windows have not been replaced, a move that would have seriously damaged the design.
photographs by the author
no permission to reuse the content of this blog has been granted to LaptrinhX.com
Posted by Tom Miller at 1:00 AM