Although the Warren family was Irish, it was considered "in the pale," or highly favored by the British.  Peter Warren was  born in 1703 and by the time he was 14 years old was taken into the British Navy.  At the age of 20 he was a full captain with his first command.
Although Warren would become a British vice admiral, Knight of the Bath, Member of Parliament and would be buried in Westminster Abbey; it was his life in colonial New York City that is most often remembered.
Captain Warren was sent to New York in 1728.  The 25-year old naval officer came and went as cruises and battles called; each time garnering more glory.  The Common Council of the city bestowed on him “the freedom of the city” and he married perhaps the most sought after young woman in the colony, Susannah Delancey, daughter of Stephen Delancey.  Susannah was not only beautiful and cultured, she brought with her “a pretty fortune.”
The Warrens lived in a stately home "on the Bowling Green."  Wealthy New Yorkers were expected to maintain summer estates north of the city.  And so on June 18, 1731, the same year he married Susannah, Warren purchased land overlooking the Hudson River north of, according to the deed, the "Old Road to Grinedge."   For several years the couple used the former home of Captain Johannes Benson, built in 1700, which sat on the land as Warren enlarged his estate.
Four more parcels were added, including land granted by the corporation of the city of New York in recognition for Warren's role in the Siege of Louisbourg.  Eventually the estate encompassed 300 acres.
In 1744 Warren started work on his permanent country manse.  A visitor, Thomas Janvier, described the house in his journal.  As recorded by New York historian Arthur Bartlett Maurice in his 1918 Fifth Avenue, he wrote:
The house stood about three hundred yards back from the river, on ground which fell away in a gentle slope towards the waterside.  The main entrance was from the east; and at the rear—on the level of the drawing-room and a dozen feet or so above the sloping hillside—was a broad veranda commanding the view westward to the Jersey Highlands and southward down the bay to the Staten Island Hills.
Historian Frederick Clifton Pierce explained in his 1901 Field Genealogy, "Originally the place extended to the Hudson river, and a double row of century-old buttonwoods formed an avenue all the way down the gentle slope to the water's edge.  The house at that time was approached from the west by a circular driveway which made an extensive sweep around the lawn.  This beautiful curve always remained defined, even when grass-grown.
"The house stood in a perfect forest of grand old trees, horse chestnuts, willows, poplars, sycamores and locusts forming in some places an impenetrable shade.  Besides these, were peach, apricot, and cherry trees, always laden i their season with delicious fruit, while a pear tree, standing guard at one corner of the house could almost thrust its giant branches into the upper windows."
Susannah Warren's gardens were sumptuous.  Planted with "a veritable fairyland of flowers," a profusion of varieties bloomed in flower beds and twined above bowers.  Pierce noted "During the month of June, the garden was literally pink with roses."  One visitor remarked that "when she left, she felt like Eve leaving Paradise."
The house was unexpectedly filled in 1748 when a devastating smallpox epidemic terrorized the city.  Sir Peter offered the colonial assembly the use of his country seat (variously referred to as The Greenwich House, The Mansion, or The Manse).   In Pierce's words the assembly "adjourned thither to escape the plague by being in the country."
Sir Peter Warren was in England in 1752 when he died.  His name survives in Tribeca's Warren Street.  He left three daughters, one of whom, Charlotte, was married to the Earl of Abingdon (the namesake of Abingdon Square).   Charlotte inherited the Greenwich Village house "with fifty-five acres of land around about it."

Charlotte sold the house and land to Abijah Hammond, who became highly visible in the local Colonial Government.   On February 5, 1790 he was appointed as a grand juror for the newly-formed District Court of New York.  In addressing his jury, Judge James Duane remarked on the task of upholding an entirely new set of laws.  "In a charge to the first Grand Inquest convened for this District, I tread an unbeaten path.  We are now become emphatically a nation."
Two years later, on October 6, 1792,  the Gazette of the United-States reported "On Monday last an election was held at Newark in New-Jersey, for Directors of the National Manufactory for the ensuing year."  Among the 14 directors were highly influential New Yorkers like John Bayard, Nicholas Low, Herman Le Roy and Abijah Hammond.
The area around the former Warren house was still rural and bucolic. But Hammond recognized foresaw the change just beyond the horizon.  He subdivided his 55 acres into blocks and lots.  The elegant country house now sat on a one-block parcel, facing Herring Street (renamed Bleecker in 1829) and bounded by West 4th Street, Charles Street, and the road that would later be named Perry.
The house was purchased in 1802 by Whitehead Fish.  He owned it until his death, after which his heirs sold it in 1819 to Abraham Van Nest for $15,000--about $288,000 today.   Van Nest was president of the Greenwich Savings Bank, was a prominent merchant and a leader in church and city affairs.
Van Nest and his wife, the former Margaret Field, had been married on April 5 1800 and had 11 children.  They used the Greenwich Village house, initially, as their summer home.  It was about two miles north of their city house on William Street. 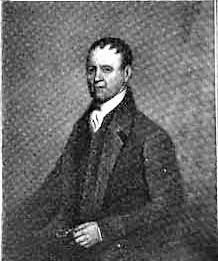 The Van Nest house was the scene of warm entertainments  Rev. John Knox, the pastor of Reformed Dutch Church of which Van Nest was an elder, often stopped by for visits.  His granddaughter, Euphemia M. Olcott, recalled her many visits with her grandfather years later.  "It was a country residence of a gentleman, with flower and vegetable gardens, a stable, a cow, chickens, pigeons, and a peacock, all dear to childish hearts."
She wrote in Bruno's Weekly in 1919, "A large hall ran through the house and a large mahogany table stood there, and this was always furnished with a large silver cake-basket full of delicious spong-cake, a batch of which must have been made every morning, I am sure, by the colored cook.  And from this basket we were urged--no!  We never needed urging--we were permitted to help ourselves--and we did."
The Van Nest's daughter Ann was married to John Schermerhorn Bussin in the house on August 20, 1833.  Bussing was a pioneer in the wholesale dry goods trade in New York, a partner in E. & J. Bussing.  Later he became head of the iron and nail firm John S. Bussing & Co.  The couple moved into the Greenwich Village mansion with Ann's parents.
Before mid-century the family was living in the house year-round.  "Notwithstanding the surging waves of aggressive progress which gradually blended the city with the rural districts and absorbed them, Mr. Van Nest made this beautiful spot his home...preserving every feature of its antiquity intact, in the midst of a densely populated district of the city," wrote Frederick Pierce.
The family received a fright on the night of February 1, 1858 when fire broke out.  The New York Times reported "The stately wooden mansion of Ex-Alderman Van Nest, in Bleecker-street, narrowly escaped destruction by fire yesterday forenoon.  A spark from one of the chimneys set fire to the roof, but fortunately it was discovered before it had made much headway, and speedily extinguished."
The journalist got the history of the estate woefully wrong.  "It was built nearly fifty year ago as a country residence by its present owner and occupant and at that time was considered a long distance out of town."
Grief visited the mansion twice in 1864.  On June 9 John Schermerhorn Bussing died; and just three months later, on the evening of September 14, Abraham Van Nest died at the age of 88.  His funeral was held in the house three days later at 3:00.
Frederick Clifton Pierce wrote that he had died "at his beautiful mansion on Bleecker Street, which had become one of the notable landmarks of the city, in 'Old Greenwich Village.'  It stood, surrounded by trees, in the enter of a city block of two and a half acres."

But the "refreshing oasis in the city of New York," as Pierce described it, was about to go.  "Shortly after it was sold, the trees felled, the house demolished, and the whole place, so filled with sacred associations, swept out of sight."
Posted by Tom Miller at 3:23 AM