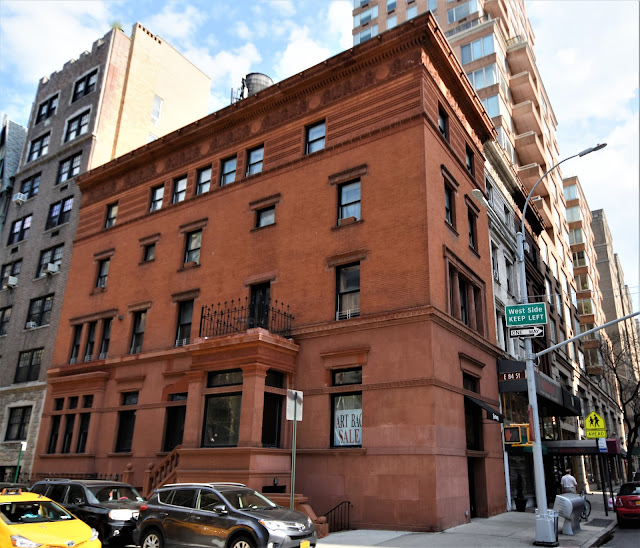 In 1890 developer Robert B. Lynd began construction on an ambitious scheme of ten upscale homes wrapping the northwest corner of Madison Avenue and 84th Street.  Designed by prolific architect John H. Duncan, the showpiece of the harmonious group would be the corner mansion.

Duncan was well-established and had designed the just-completed mansion of Philip Lehman at No. 7 West 54th Street.  But it would be his later monumental works--Grant's Tomb and the Soldiers' and Sailors' Memorial Arch in Brooklyn--for which he is best remembered.

It appears that shortly after the construction began Lynd realized he had overextended himself financially.  The four residences on 84th Street were never built.

Completed in 1892 the handsome row was clad in red brick and trimmed in terra cotta.  Cornices and bandcourses ran uninterrupted from house to house, keeping the visual weight of the row low and the emphasis horizontal.  An elaborate terra-cotta frieze below the cornices, and two-story Ionic pilasters above the parlor level of all but the corner house exuded an imperious, Regency-period air.

Lynd's financial problems continued when No. 1130 Madison Avenue did not immediately sell.  He lost the property in 1894 when the Washington Life Insurance Company foreclosed.  Of Lynd's $49,250 building loan, he still owed $47,365.

Five years after its completion, Washington Life Insurance sold No. 1130 to Alice Grace Holloway.  The daughter of shipping tycoon and former mayor William R. Grace, when she married William E. Holloway in 1885 he was made head of the San Francisco branch of J. W. Grace & Co.   The Holloways would have one son, William, Jr.


On June 20, 1892, Holloway, "a prominent figure in San Francisco society, among athletes, and in several clubs," according to The New York Times, was thrown from his horse.  His broken leg had to be amputated.  Shock and blood poisoning led to his death four days later.

Now back in Manhattan, Alice had resumed her upscale lifestyle.  In November 1898, the year after she purchased No. 1130, she hired architects D'Oench & Simon to do minor renovations--"servants' stairs put in, [and] a well hole to be cut in 2d story."  Alice seems to have gotten more for her $250 than new stairs.

She continued to entertain and move within society.  On November 21, 1899, for instance, she hosted a breakfast for Manhattan Alumnae Association of Mount St. Vincent Academy.  The Times mentioned that the membership "includes most of the well-known society women in New York who are Roman Catholics."

One frequent visitor to the Holloway house received no press coverage until November 1900.  That month the engagement of Alice to Albert F. D'Oench, the 48-year old architect whose firm had installed her staircase, was announced.  The couple was married in the Grace mansion at No. 31 East 79th Street on January 10, 1901.  William Holloway, Jr. gained a half-brother with the birth of Russell Grace D'Oench nine months later on October 24.


The family maintained a country home at Manhasset, Long Island.  It was there, after a long illness, that Albert died on July 21, 1918.   Alice had sold the Madison Avenue mansion four years earlier, in February 1914, to Edward R. Finch for $70,000--a little over $1.7 million today.

A highly visible politician and lawyer, he had married Mary Livingston Delafield a year before. Finch's American roots could be traced back to Abraham Finch, who arrived in 1630. Mary's pedigree was no less impressive.  She was descended from Francis Lewis and Philip Livingston, both signers of the Declaration of Independence, and Chancellor Robert R. Livingston who administered the oath of office to George Washington.

The couple wasted little time in doing renovations to their new home.  Three months after the sale they hired the architectural firm of Sommerfeld & Steckler to do $5,000 in alterations.  The updating included converting an upper portion of the mansion to an upscale apartment.

Finch began his political career in 1901 when he was elected to State Assembly.   In 1915 he was appointed to the Supreme Court by Governor Charles S. Whitman.   Both he and Mary were staunch advocates for children.  Finch was a founder of the Child Welfare Commission, and was the author of the first child labor law introduced to the State Assembly.   Among her many altruistic activities, for years Mary would serve as president of the Ladies Auxiliary of the Soup School, and board member of the Washington Square Home for Friendless Girls.


The first addition to the Finch family came on Christmas Day, 1914, when daughter Mary was born.  Her auspicious birthday earned her the second name, Noelle.  There would be two more children, Anne Crane Delafield, born on March 13, 1918, and Edward Ridley, Jr. on August 31, 1919.  Little Edward arrived at the Finch's country estate in West Hampton Beach.

The apartment in the Finch mansion was leased to upper-class tenants.  Mrs. E. du Pont Irving moved in in November 1918; Carl H. Randerbrock, whose name routinely appeared in society columns, signed a lease in October 1921; and in the 1930s Alex Voroniesk was here, reputedly a count from an aristocratic Russian family.

The quiet of the affluent residential neighborhood was threatened in April 1922.  For years every May Day saw communists, socialist and anarchists staging often violent demonstrations.  This year the police department was determined there would be "no possible radical outbreak."

The bomb squad and special units were placed on special patrols, watching demonstrations carefully for suspicious packages.  And the homes of highly-visible lawmakers were given attention.  The New York Herald reported that the Finch house would be carefully watched. 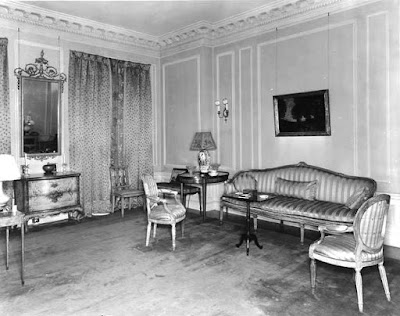 The first of several debutante entertainments began on the afternoon of November 4, 1933 with an afternoon reception for Mary.  The New York Times noted "Judge and Mrs. Finch will give receptions for their daughter next Saturday and on Nov. 18.  On Thanksgiving Eve, Nov. 29, they will give a small dance at their home for the formal introduction of their daughter."

The year 1936 would be a busy one for the Finch family.  On November 14, 1936 Mary was married in a fashionable St. Bartholomew's Church ceremony to Francis Waller Haskell.  An attorney, Haskell had been educated at Exeter Academy and West Point.  The reception was held in the Madison avenue mansion.

Edward and Mary had little time to breathe.  Less than three weeks later the first of the debutante entertainments for Anne was held in the house.  She was introduced with a major splash.  The Times called the supper dance a "large party" and noted that "many dinners were given before the dance" by other socialites in anticipation of the event.


Now a member of society, Anne threw herself into hosting.  Her many dinners, receptions and teas were often for the benefit of charities or organizations.   Apparently unhurried, it was a full decade after her debut that she was married.  Like her sister, she was wed in St. Bartholomew's on May 8, 1943.  Her husband, Major Howard Ellis Cox, was a member of the Army Air Forces.

The wartime ceremony was evidenced by the many military uniforms among the wedding party, including Anne's brother, Captain Edward R. Finch, Jr., Army Air Forces; and her brother-in-law, Major Francis W. Haskell of the Army. 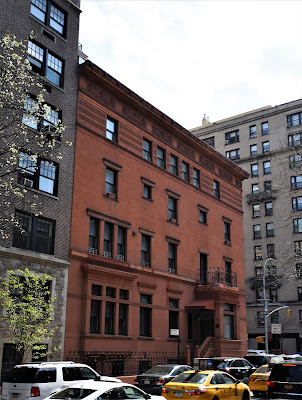 In an interesting side note, Anne's and Howard's son, Edward Ridley Finch Cox, would be married on the White House lawn to President Richard Nixon's daughter, Tricia, on June 12, 1971.

The year of Anne's marriage her father, now 70 years old, retired from the Court.  He did not slow down, however.  He immediately established the law firm of Finch & Schaefler and continued work as an active senior partner.

The elderly man received a heart-warming gesture from his son in 1950.  Edward asked him to be his best man at his wedding to Elizabeth Brewster Johnson.  Elizabeth, like her new husband, had an impressive family background.  She was descended from Elder William Brewser of the Plymouth Colony, and from Rev. Moses Hallock, an early settler in Plainfield, Massachusetts.

Mary and Edward lived on in the Madison Avenue mansion.  She remained active in her charities, and he continued to practice law.   Then, on January 25, 1961 Mary died in the house at the age of 80. 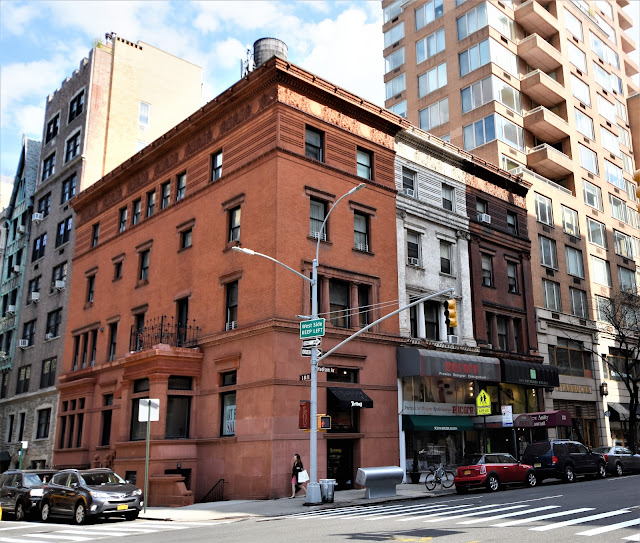 Three years later Edward Finch stepped down as active partner of his law firm, taking the position of counsel to the office.   He died in his Westhampton Beach country home a year later, on September 16, 1965.  He was 91 years old.

The Finch family retained ownership of the house until 1974.   In 2001 a store space was carved into the Madison Avenue elevation.   The 15-room single family house (the apartment was by now done away with) was purchased in 2003 for $5.5 million by Maryam Ansary, ex-wife of former Iranian ambassador to the United States, Hushang Ansary.  Apparently seeing the house as a financial opportunity, she placed it on the market a month later for $20 million.

With no takers she reduced the price until investor Lily Lee Lee Wong paid $12.1 million in June 2007.  Taking a page from Ansary's book, she relisted the house the next month for $24.5 million.  One of her brokers was frank, telling The Observer "I don't quite get what she's doing here.  But obviously at $25 million she's not going to do it." 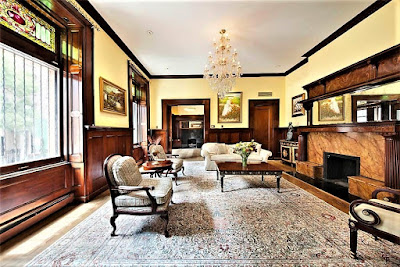 Indeed, when the mansion came on the market again in 2015 it was listed at a more reasonable $15.5 million.  The offering listed "four bedrooms, seventh baths, four wood-burning fireplaces, [and] two gas fireplaces."  Thanks to the 60-year residency of the Finch family, the house--inside and out--is largely preserved.