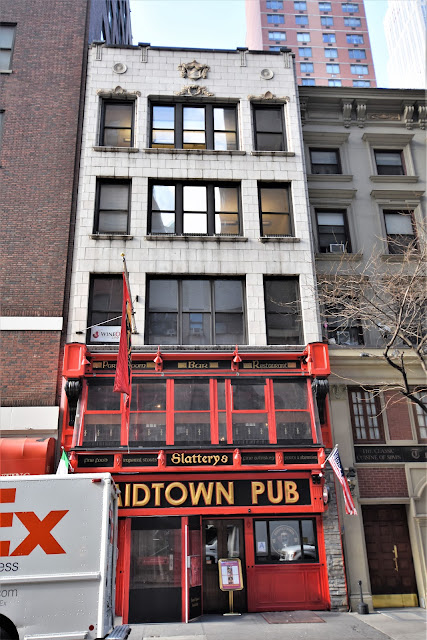 In 1852 John Jay Phelps, Isaac N. Phelps and William E. Dodge purchased the block front on Madison Road (later renamed Madison Avenue) between 35th and 36th Streets, and began construction of their handsome brownstone mansions.  They were planting the seeds for what would be a new, exclusive residential district known as Murray Hill.

Within only a few years other free-standing mansions and upscale rowhouses appeared.  Among them was the Italianate-style brownstone at No. 8 East 36th Street, between Madison and Fifth Avenues.  Part of a speculatively-built row, it was 25 feet wide and four stories tall above an English basement.

It was home to New York World journalist George Alfred Townsend, who arrived in Manhattan from Philadelphia in 1861.  But the bachelor reporter most likely saw little of his new home.  That same year , on April 12, the Confederates opened fire on Fort Sumter, triggering the Civil War.


George was sent off to cover the conflict.  At just 20 years old, he was the youngest of the nation's correspondents.  In addition to reporting on the battles, he was in Washington to cover the assassination of Abraham Lincoln and then doggedly followed the subsequent investigation.  When he returned to his East 36th Street house following the war, he assembled his notes into a book, The Life, Crime and Capture of John Wilkes Booth, published in 1865.

Immediately upon his return he married Elizabeth Evans Rhodes and the newlyweds soon moved to Washington DC, where he acted as the Chicago Tribune's DC correspondent.

The house became home to the Thomas P. Eldridge family.  Born in Williamson, Massachusetts in 1829, Eldridge arrived in New York in 1855 and went to work in the dry goods business of Phelps, Bliss & Co. as a salesman.  Later he was made a partner, and in 1868 the firm was renamed Eldridge, Dunham & Co.

Shortly after he and his wife, Julia, moved into the 36th Street house, a daughter, Julia Norton Eldridge was born.  Four years later, on May 21, 1870, the little girl died.  Her funeral was held in the house two days later, on Monday afternoon.

The family suffered a far less consequential tragedy the following year when its beloved pet escaped.  An advertisement was placed in The New York Herald on October 13, 1871: Lost--On Monday last, a Skye Terrier.  A suitable reward will be paid.

By now Eldridge's wealth was reflected in his directorships in the Home Insurance Company and the Dry Goods Bank.  He also served as a trustee in the fashionable Fifth Avenue Brick Church.

On December 4, 1874 Eldridge left his office "in good health," as described by The New York Times, "but shortly after arriving at his home he was attacked with inflammatory rheumatism."  The condition worsened into rheumatic fever, and the 45-year old died around 4:00 on the morning of December 18.

Morgan apparently presented the house as a wedding gift; but before moving in Jack did some updating to the old brownstone.  He hired architects Sturgis & Cabot to remove the stoop and lower the entrance to sidewalk level, add a three-story extension to the rear, make "interior alterations," replace the plumbing, and "alter" the wells.

To make the exterior more in fashion, the former parlor floor (now the second) received a French make-over and the third floor windows were given a Beaux Arts treatment.  The Italianate cornice was replaced with a formal balustrade.  The changes cost Morgan $40,000--more than $1 million today.


In April 1899 Henry T. Sloane, the massively-wealthy partner in W. & J. Sloane, obtained a divorce from his wife, Jessie, who had been carrying on an affair with Perry Belmont.   Jessie went directly from the courtroom to the train station where she boarded a train for Connecticut to be married to her lover.  (Sloane had written into the divorce decree that she could not marry in the State of New York while he was alive.)

Months earlier Sloane had taken his two daughters from the immense mansion he had built for his wife two years earlier at No. 9 East 72nd Street, and brought them to No. 8 East 36th Street, which he leased from Morgan.  One month after the divorce, on May 26, The Times noted "Henry T. Sloane has secured a permanent lease of the home of J. Pierpont Morgan, Jr...Mr. Sloane has been occupying the house with his two daughters, Emily and Jessie, for some time under a temporary lease."

The Sloanes would remain in the house until their new mansion at No. 18 East 68th Street, designed by C. P. H. Gilbert, was completed in 1905.  While Jack and Jane leased other residences for their own use (for the winter of 1904-05, for instance, they leased the furnished Prescott Hall Butler house at No. 22 Park Avenue), Jack retained ownership of the 36th Street house.  After Henry Sloane moved out, it was rented by iron merchant David S. Egleston and his wife, the former Frances N. Hawley.

Egleston was the head of Egleston Brothers & Co. at No. 160 South Street, and a director in the Bank of America.  He was a member of the exclusive Union and Metropolitan Clubs and despite his advanced age, refused to retire.  On the afternoon of New Year's Day, 1908, the 78-year old died in the house of cirrhosis of the liver.

While the Murray Hill neighborhood east of Madison Avenue remained relatively unchanged, the block closer to Fifth Avenue was seeing the encroachment of businesses.  Frances (known to friends as Fannie), however, remained in the house, continuing to pay rent to Morgan, and later to Mrs. S. A. Robbins who bought the house along with several other properties in the immediate neighborhood.

Fannie remained active in society; especially in the social life of Ridgefield, Connecticut, where she maintained her summer estate.  She died in the 36th Street house on Friday, May 4, 1923.  Five months later the house was sold to a developer "for improvements."

The renovations, completed within the year, left no hint of the elegant home that had housed some of Manhattan's wealthiest citizens.  Remodeled as headquarters for the New York State Commission for the Blind, it was clad head to toe in white terra cotta.  The minimal decoration of the clean 1920s design appeared in the form of shells and cornucopias above the top floor openings, and a draped heraldic shield flanked by rondels below the parapet.  We are left to wonder what the ground floor looked like.


The building was opened with a two-week sale of holiday gifts made by blind workmen.  In what seems a strange accommodation today, the State Commission arranged the sale so that "members of various religious faiths have been allotted days on which they will have charge of the sale," according to The New York Times on November 22, 1924.   November 24, for instance, was "Jewish Day;" November 26, "Episcopalian Day," and so forth.

The money paid for the hand-made goods went back to the makers.  The newspaper noted that the training and work provided by the Commission for the Blind provided hope as well as income.  "There will be tables of hand-woven scarfs, mats, curtains, cushions and bags, which the blind themselves never see as they work away at their looms.  But this weaving has brought many of them back thread by thread to a new interest in living."

Among the visitors to the sale was Governor Al Smith, on December 2.  Smith gave a speech which explained the history of the Commission.  The Times made special note of one journalist in the audience.  "As the Governor was delivering his address one of these present traced his words with a finger on the back of Catherine McGirr, employed on the Ziegler Magazine for the Blind.  Miss McGirr, who, like Helen Keller, is both blind and deaf, has been trained to interpret works traced on her back, arms, or face."

Throughout the rest of the century the building would be home to various businesses.  Arthur Merchandising Designers, Inc. was here in 1930; and by 1935 the ground floor held a Western Union branch office.  In 1944 John C. Anderson, a company that had dealt in "hides and leathers" since 1857, purchased the building.   By mid-century the ground floor retail space was home to Litecraft, a shop that offered imported lighting. 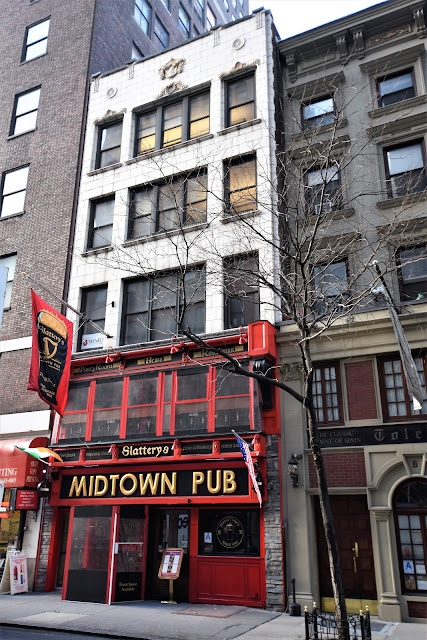 Today the upper three floors remain unchanged since the 1924 make-over.  Below, a mock Irish pub facade replaces the storefront.  And not one patron who sits at the bar and orders a Guiness today could imagine the history of the pre-Civil War period house around him.