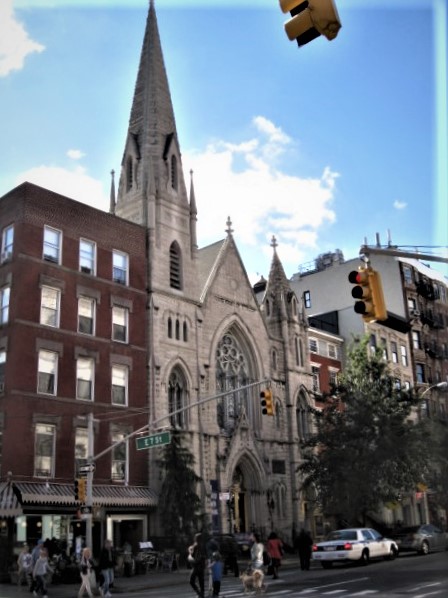 The church as it appeared prior to the December 2020 fire.
In 1621 when the Dutch East India Company was organized, the Protestant Reformation was only a century old.  The Dutch settlers who founded New Amsterdam two years later brought with them their Reformed Dutch religion.  In 1626, according to The New York Times over two centuries later, “the first religious meetings of which any record is left, were held in the upper room of a mill erected by Francois Molemaker, near the Port of the Battery.”
It was the planting of the seed of the Reformed Dutch Church in New York City.  The Collegiate Church was founded in 1628.  Its first building was erected on Nassau Street in 1731.  Two years earlier Abraham De Peyster had ordered a bronze bell cast in Amsterdam.  It arrived by sailing ship in time to hang in the new belfry.  More than two centuries later The New York Times noted, "Its silvery tone is attributed to the generosity of citizens of Amsterdam who donated silver coins to its alloy."
The bell was pealed in celebration of the acquittal of John Peter Zenger, accused of printing seditious literature in 1735, and was rung when news of the signing of the Declaration of Independence reached New York on July 9, 1776.  That incident earned it the appellation of "the Liberty Bell."  Before the British invaded New York City, the bell was taken down and spirited away and hidden in Carlisle, Pennsylvania.  It was brought back in to ring out on the day of George Washington's inauguration.
The Second Middle Collegiate Church was begun on Lafayette Place in 1836.  The marble pulpit from the original church, fashioned in Amsterdam, was installed and the Liberty Bell hung in its belfry.
Known alternatively as the Lafayette Place Middle Dutch Church, the congregation worshiped in the building until 1887.  The property was sold and the Liberty Bell moved to the Collegiate Church of St. Nicholas on Fifth Avenue.   A new building for the Middle Collegiate Church was begun at No. 112 Second Avenue between 6th and 7th Streets in 1891.
Designed by architect Samuel B. Reed, the Gothic Revival style structure was faced in rough cut limestone.  The symmetry of the design was  interrupted by the soaring stone spire at the north side.  Inside was a familiar object.  King's Handbook of New York noted "The pulpit is an object famous among old New-Yorkers, having originally been in the church in Lafayette Place."  The article pointed out another distinctive feature.  "The windows are of stained glass, made by Tiffany Glass and Decorating Co., and present a unique and very brilliant feature by reason of receiving their illumination, day and night, from electric lights behind the glass." 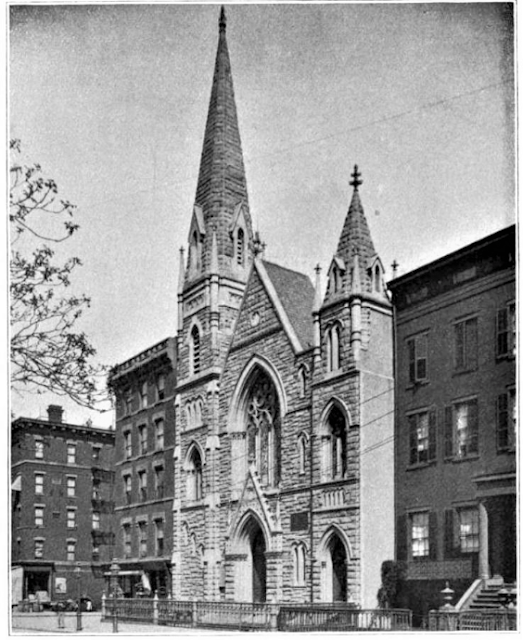 Nickerson's Illustrated Church and Musical Director, 1895 (copyright expired)
The ten Tiffany windows were inspired by drawings of Dresden artist Heinrich Hoffman.  Decades later journalist Rita Reif, writing in The New York Times, pointed out "A highlight is the great west window [above the entrance], into which Tiffany worked the church's emblem--a lily among the thorns." 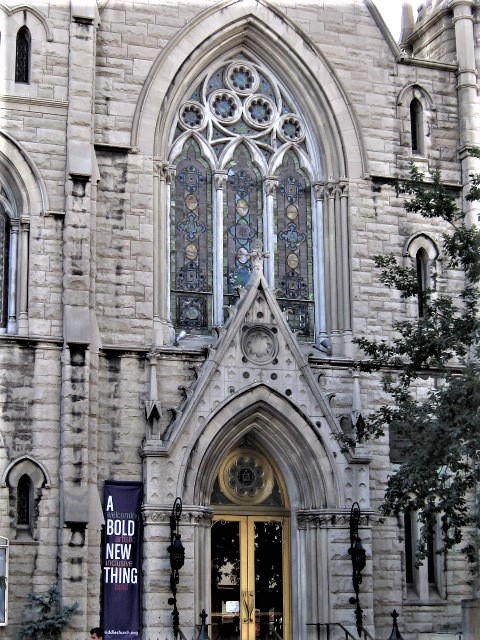 The neighborhood was largely German at the turn of the last century.  On June 15, 1904 members of the nearby German-language St. Mark's Evangelical Lutheran Church boarded the General Slocum river boat for a day's outing.  The side-wheeler caught fire around 10:00, burning to the waterline within 15 minutes.  Nearly 1,000 lives were lost.
Almost 200 of the victims were members of other congregations.  On June 25 The Globe and Commercial Advertiser reported "The Middle Collegiate Church was the heaviest loser.  In the sewing school, Sunday school, and membership of the church were forty-eight who perished, and including those connected in some way with the membership the losses were close to seventy."  Later that year, on November 1, three marble tablets were unveiled in the church, memorials to the General Slocum victims.  For years afterward a memorial service for the victims was held every June.
Another piece of memorial artwork was unveiled on June 14, 1914.  Mary Wyckoff Knox was the daughter of the Rev. Dr. John Knox, senior minister of the Collegiate Church, who died in 1856.  The "mural tablet" was dedicated to the memory of the recently deceased 76-year old who, according to the New-York Tribune, "devoted her life to helping the people of the East Side." 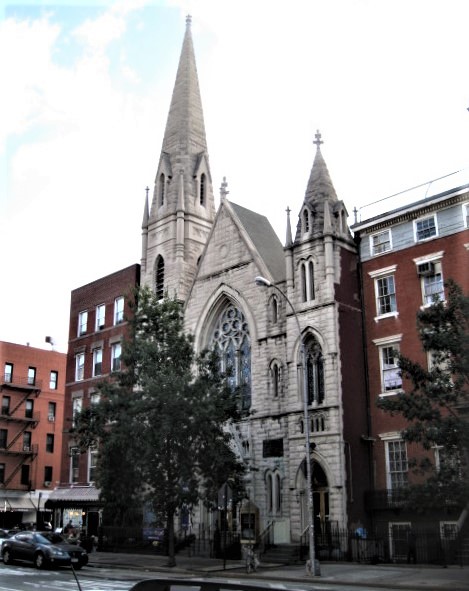 In 1949, seven years after the celebration of the building's 50th anniversary, a joyful reunion came to pass.  The St. Nicholas Church was demolished and on December 19 The New York Times reported "The [Liberty] bell will be returned to the belfry of Middle Collegiate Church after a hiatus of almost eighty years."
Now in the belfry of the Second Avenue structure, the Liberty Bell resumed its tradition of proclaiming significant events.  It had pealed upon the death of George Washington and had been rung on the occasion of every President's death since then.
It was rung after the death of the leader of another country on February 14, 1956.  On the day of King George VI's funeral in London, the Liberty Bell was run 56 times--one peal for every year of the monarch's life.
President Dwight D. Eisenhower arrived in New York in December 1959, headed to Spain to meet with dictator Francisco Franco.  The Liberty Bell was rung in greeting to the President, minister Rev. Dr. Ernest R. Palen telling The New York Times it "would be rung for an hour to express gratitude for the President's safe return and hope that his mission abroad would prove successful."
On January 29, 1978 following ceremonies to mark the Collegiate Church's 350th anniversary in New York, the senior minister, Rev., Dr. Harvey B. Hoffman, took The New York Times journalist Gregory Jaynes up into the "dusty belfry" to see the Liberty Bell.  The trip gave a hint at the condition of the aging structure.
"Now stay close to the edge of of the steps," the minister warned Jaynes.  "Don't step in the middle.  One of these old steps fell through on the sexton not long ago."  Hoffman admired the relic and said, "It's a fine old bell."  Afterward, wrote Jaynes, "He pointed out the Tiffany windows, the frescoes, the marble pulpit cast in the Netherlands in the 18th century." 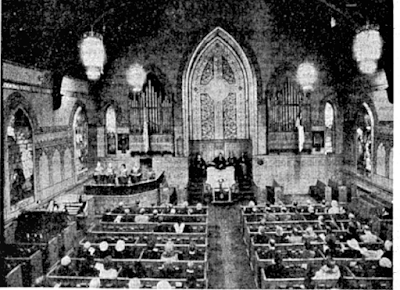 photo by Fred r. Conrad, The New York Times, January 30, 1978
As the East Village changed, the Middle Collegiate Church adapted.  In the last quarter of the 20th century it hosted art fairs and jazz on the church steps.  When the AIDS epidemic was taking the lives of thousands of New Yorkers the church hosted Monday night dinners for as many as 100 people with Aids.  It additionally ran a food a clothing pantry, and at the beginning of the 21st century volunteers packed bag lunches each Sunday to distribute among the homeless in Tompkins Square Park.  The congregation's awareness of social and racial inequality was reflected in July 2013 when members wore hooded sweatshirts to services, a tribute to Trayvon Martin who wore one when the unarmed teen was shot dead by George Zimmerman.
Early in the morning of December 5, 2020 a fire broke in an unoccupied building on East 7th Street, just around the corner.  It quickly spread to the corner structure, and then to the Middle Collegiate Church.  The six alarm inferno, which took eight hours to extinguish, left the nearly 130-year old structure in ruins.  The magnificent Tiffany windows were destroyed as were other artworks and, most likely, the marble memorials.  At this writing the condition of the 18th century marble pulpit and bronze Liberty Bell is unsure. 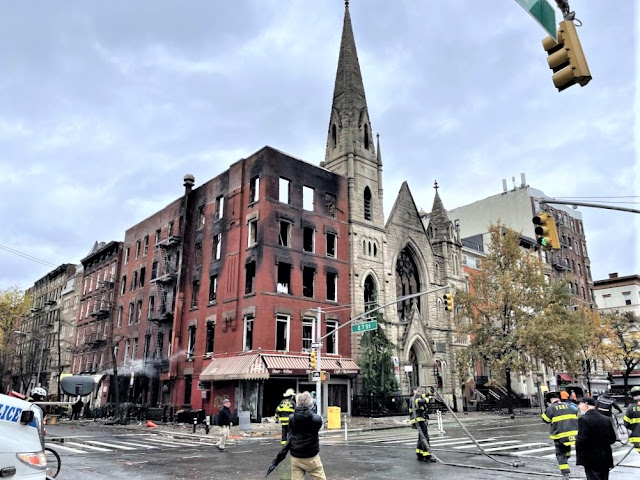 photo by Matt Pruznick via newyorknimby.com
uncredited photographs by the author
Posted by Tom Miller at 1:12 AM