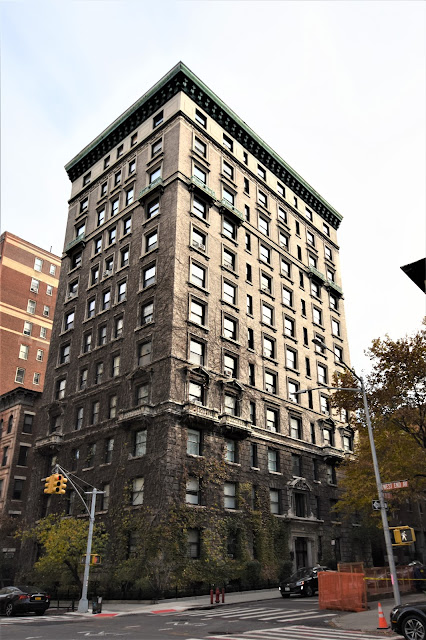 In the first decade of the 20th century the family of well-known architect Ralph Samuel Townsend lived in the small flat building at the northeast corner of West End Avenue and 91st Street.  Townsend had married Adelaide Youngs Odell in 1879.  They had two daughters, Olga May and Edna.
In 1906 Townsend partnered with architects Albert Steinle and William Cook Haskell to form Townsend, Steinle & Haskell.  The firm focused on designing large apartment buildings.  And one of those would replace the small building where the Townsend family lived.
In 1912 Adelaide Townsend joined with George W. Odell to form the Odell & Townsend Holding Co.  They demolished the corner building and, not surprisingly, hired Townsend, Steinle & Haskell to design a modern replacement.  The striking neo-Renaissance style building was completed the following year.  Twelve stories tall, it was faced in beige brick and trimmed in limestone.
The architects embellished the façade with Renaissance inspired details.  The end bays above the rusticated three-story base sat behind stone balconies, their architrave frames capped with classical pediments.  The motif was copied at the tenth floor with bronze-railed balconies.  While the two-story entrance was squarely on West 91st Street, it took the address of 640 West End Avenue.   The doorway sat between two polished granite columns within an intricately carved frame.  The framing of the opening directly above was equally elaborate, its columns being of colored marble. 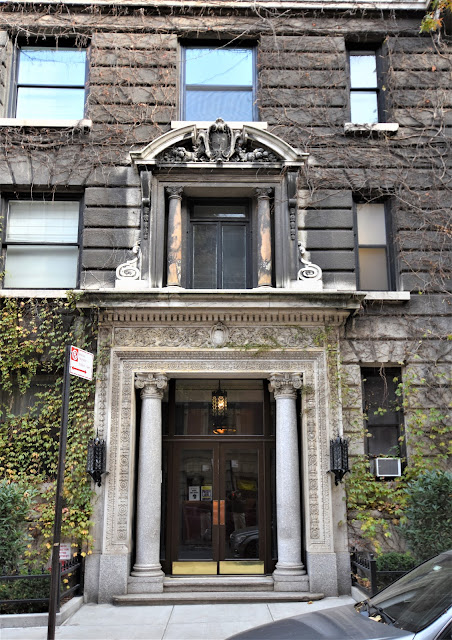 The building's tenants were, expectedly, well to do.  Among the earliest were Edwin Norton and his wife, the former Lucy E. Akin.  Born in Rockton, Illinois in 1845, Norton was an inventor and the first president of the American Can Company.  He held more than 5,000 patents for his inventions related to sheet-metal working machinery.
Among the Nortons' neighbors in 1915 was mining engineer George C. Kaufman who worked with the Guggenheim Exploration Company.  The New York Times said of him, "He is known to mining men all over the country."  Kaufman was hit with an embarrassing and potentially career-ending law suit in the first days of 1916.
Lillian C. Conklin claimed that five years earlier, on June 2, 1911, she went to Kaufman's apartment answering an advertisement for a maid.  She brought her sister, Mrs. Jennie Craven along.  They entered the servant's entrance in the kitchen and met Kaufman in the dining room.
The New York Times reported on January 16, 1916 that Lillian "asserts that he was alone, and that the shades were drawn close, and the electric lights were blazing, although it was eight o'clock in the morning...Mr. Kaufman jumped up, set her upon his lap, put his arms around her, and kissed her four times on the mouth in rapid succession, one very quick kiss, and one long, lingering kiss."  The young women claimed "He was occupied several minutes kissing her and called her 'dearie' and 'sweetie dear.'  She said he held her tightly in his lap with his arms around her neck and that she sat there for ten minutes."
Kaufman, according to Lillian's complain, promised to take care of her, to give her clothes and diamonds and said "I will have you, pretty baby dear."  She said that at the end of ten minutes she demanded he let her go or she would scream.  In the meantime her sister sat in another room and did not intercede.
Kaufman's side of the story was quite different.  As a matter of fact, at the time he had had Lillian and her companion arrested.  He told the courts through his attorney that she "got money from him and from others by pretending to want employment, and that she and the woman who was arrested with her had been caught going through his apartment."  Kaufman insisted that at the time of the interview his wife and their laundress were in the room.  It all proved too much for the engineer.  On the first day of the hearing his attorney asked for an adjournment until April because Kaufman was ill in California, suffering from "nervous prostration, heart trouble, and a throat affection."
Press coverage of residents was, of course, routinely less scandalous.  Such was the case in 1919 when Earl Ervine McClintock and his wife, the former Sara Dennison Jack, welcomed a new baby, Ellen Reynolds McClinton on December 4.  McClintock was a director and manager of The Bayer Co., Inc.
And on June 15, 1923, The American Hebrew announced, "Mr. and Mrs. Louis Cohn, of 640 West End avenue, will spend the summer at the Grand View Hotel, Lake Placid."
Millionaire Samuel J. Clarke and his family were neighbors of the Cohns.  Like George C. Kaufman, he was involved in mining and was a director of the Nevada-based Beatson Copper Co., and the Mother Load Coalition Mines Co.  He was as well a director in the Hanover Fire Insurance Company.  Living with him and his wife, Agnes, was their daughter, Ellen C. Bertrand.
Samuel J. Clarke died in his apartment on December 30, 1924, leaving his substantial estate equally to his wife and daughter.  The women continued living in the apartment until Agnes's death on September 14, 1929.  She left Ellen her entire estate, valued at $8.3 million--nearly $125 million in today's money.
Nanette W. Chesebrough was the widow of wealthy petroleum jelly manufacturer William H. Chesebrough.  The Chesebrough Manufacturing Company was founded in 1859 by William's brother, Robert Augustus Chesebrough, and made one product--Vaseline.  William Chesebrough was the manager of the London office until his death there on June 8, 1905.  Nanette returned to the New York, at some point moving into an apartment at No. 640 West End Avenue.  She died on December 11, 1945, leaving an estate equal to just over $4 million today. 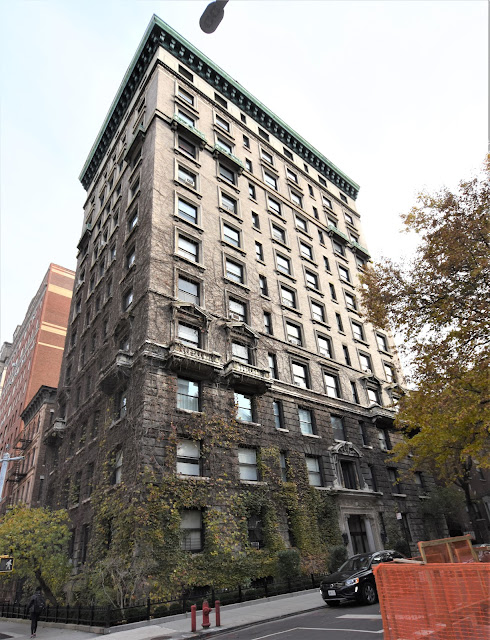 A renovation completed in 1954 resulted in two apartments per floor except on the 12th, where there were three.  A subsequent remodeling in 1963 resulted in a few additional apartments on some floors.
photographs by the author
Posted by Tom Miller at 1:17 AM