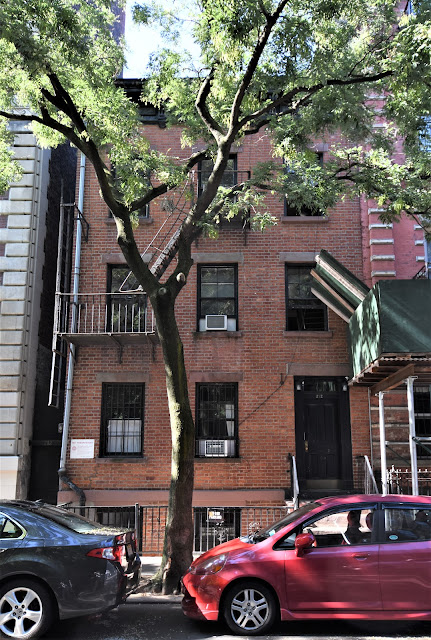 Born in Ireland, Andrew Smith lived in the comfortable brick-faced house at No. 130 West 16th Street in the mid-1840's.  Designed in the recent Greek Revival style.  It was clad in Flemish-bond red brick and trimmed in brownstone.  A narrow horsewalk, or passage way, led to a smaller house in the rear yard.

Smith suffered a gruesome accident on November 1, 1848.  The New York Herald reported that he "took a pitcher and left the house, on his way to the store, to get some liquor, and not returning for some length of time, search was made, when the old man was discovered in the [rear] area, the pitcher broken and the deceased quite dead."  The "old man" was 56-years old.  The Coroner deemed it an accident, the cause of death due to "injuries received by falling down the rear area of house No. 130 West 16th street."

By 1852 the house was owned by another Irishman, Michael McCann and his wife, Catherine.  McCann ran a grocery store.  His merchant status was in contrast to his brothers, John, Patrick and Henry, who lived in the house as well.  All three listed themselves as laborers in city directories.

Henry and Patrick had moved out by 1853 when the McManns were taking in two boarders, John Balem, who made his living as a carman, or delivery driver; and John Trainer, a stonemason.  They were soon replaced by Alice McMahon and her daughter Bridget.

It is possible that the McCanns and the McMahons knew each other from their native country.  Alice and her now-deceased husband, John, had immigrated to America from Kilskery, Ireland, where Bridget had been born.   The McCanns came from the same village.

There would be more tragedy in Alice's life not long after taking rooms with the McCann's.  Bridget fell sick and died on June 18, 1856 after what the New York Herald termed "a lingering illness."  Her funeral was held in the house the following afternoon.

The parlor would be the scene of another funeral three years later.  Catherine McCann died on the morning of August 7, 1859 "after a short but severe illness," according to the New York Herald.   As had been the case with Bridget, the funeral was held the very next afternoon.

Michael McCann remained in the house until 1861 when David Banta, a builder, and his wife Martha purchased the house.  Like the McCanns had done, they took in a few boarders.  In 1861 Robert Copely, a gardener, and Robert North, a china merchant, had rooms here.  Both boarders would remain at least through 1869.
By then the street had been numbered for a year, giving the house the new address of No. 212 West 16th Street.

David Banta died in 1863.  His widowed sister, Sarah Vanderbilt, moved in with Martha.  Sarah made a living making vests.  The two women, along with Martha's long-term boarders moved out by 1872, although Martha retained ownership of the house.

That year it had three residents.  Joseph C. Halloway was a "cutter" (most likely a stone cutter), Frederich Holtach was a cabinetmaker, and John J. Byrnes was listed simply as a clerk working in City Hall.  But Byrnes was much more than that.

He had started out his career simply enough, appointed as a patrolman with the police force on February 15, 1865.  He turned out to be a rogue of sorts, with at least 16 charges being filed against him in his first four years.  They were variously treated: some dismissed, others resulting in disciplinary action and at least one costing him three days' pay.  But the most serious offense happened on July 31, 1869.

At some point shortly before that date Byrnes "exposed his person" to a young woman who lived on Stanton Street "in a most indecent manner."  Then on that July night he accosted her again, saying he "would like to have some pleasure with her," according to the woman.  When she refused, he "then told her that he was a policeman and a detective, and that he would compel her to receive his advances," said The New York Times.  The girl broke free and ran directly to the nearest police station.  On the same date that she made her complaint, Byrnes signed his resignation.

But Byrnes had connections within Tammany Hall.  He was made a supply clerk in the Fire Department.  Now living in the 16th Street house, he received $1,500 a year for operating a fictitious "repair shop" for the Fire Department at the address.  The graft added the equivalent of nearly $40,000 today to Byrne's income.

Byrne's increasing favor within the Tammany organization was evidenced in September 1877 when A. P. Fuller, Chief of the Supply Bureau, was fired without cause.  The New York Herald reported that Fuller stated "he had held the position for ten years without having a single charge made against him.  He claimed that the Board had no legal right to remove him without preferring specific complaints."  Fuller's protests went nowhere.  The article ended saying simply "John J. Byrnes was appointed in his place."

The following month Tammany Hall named Brynes as Alderman for the Fifth District.  The New York Times was clear in its opposition, saying on October 29, 1878 "he is a fair sample of the class of men Tammany Hall seeks to place in power in this city."  The newspaper said that before he had accepted the nomination, Brynes "should have remembered that his record as a policeman is on file in the department."  The New York Times dragged out his shocking record, including the details of his sexual assault.

Byrnes lived at No. 212 West 16th Street at least through 1880.  He had two live-in servants during his latter years here.

After Byrnes left, the residence again housed roomers.  Thomas Brock lived here in the summer of 1891 when he narrowly escaped death.  The 19-year old was employed by Liebler & Maass downtown.  The printing firm was well-known for its vividly colored theater posters.   He took his lunch break around noon on August 22.  As he ate in Petersen's Restaurant around 12:30 the entire neighborhood was rocked by a massive explosion.

A fire had broken out in the offices of John C. Eberle, map maker in the nearby Taylor Building at Nos. 66-76 Park Place.  Chemicals detonated and, according to the Clarkesville, Tennessee newspaper The Leaf-Chronicle, "The explosion was immediately followed by a fire, and in a few minutes the building collapsed."  Surrounding buildings were damaged by the tons of debris, and hundreds of pedestrians and workers were buried.

Luckily Brock had chosen not to eat in the Hudson Restaurant which was in the Taylor Building.   There were about 25 people in that eatery and reports said "there is very little chance of many of them escaping."  Recovery was still ongoing five days later.  The New York Times reported that 61 bodies had been removed from the rubble and at least 20 were still missing.  Thomas Brock was originally listed as missing, but on August 27 his name was listed among the survivors.

Well-to-do New Yorkers left the stifling heat of the city every summer for their country homes.   But the working class tenants of No. 212 West 16th Street did not have that luxury.  A heat wave in 1901 was brutal, reaching 99 degrees on July 2.  The New York Times reported the following day that more than 200 people were dead and 500 had been hospitalized with heat prostration.  "Many of the hospitals were unable longer to send out ambulances because their horses had given out."  Among those who perished from the heat was Isabella Kemp, found in her room in the West 16th Street house. 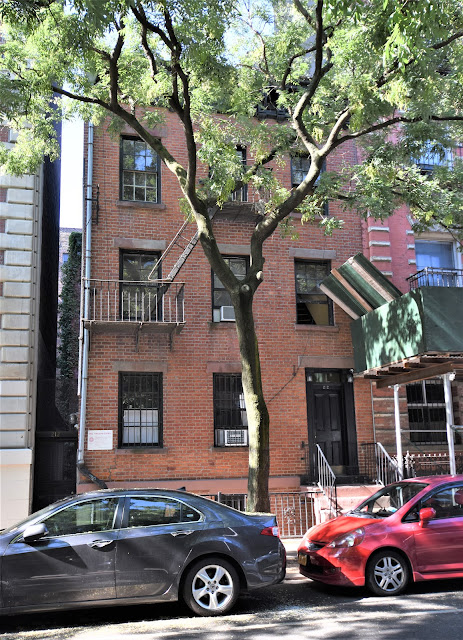 For the next few decades the house continued to house roomers.  Eugene J. Rogers lived here when he was called away to fight in World War I.    He was initially reported wounded in action in 1918, but he died from his injuries not long afterward.

Louise Anselm worked from her rooms here in 1924.  Unfortunately, her occupation--that of fortuneteller--was reportedly a scam.  An undercover officer, Helen Thomas, visited the 62-year old's apartment to have her horoscope read.  She got more than that.

Thomas was charged $2 for the reading (about $30 today) during which she got dire news.  In court, according to The Daily News, "Miss Thomas said she was told not to marry" and The New York Times reported that "Mrs. Anselm predicted that the policewoman's mother would die within a year and that Mrs. [sic] Thomas's marriage--she is engaged--would bring only sickness and death."  Louise was held in $100 bail for trial on a charged of disorderly conduct.


In 1941 a renovation resulted in two apartments per floor.  And while most of the interior details have long ago been lost, at least one period Greek Revival mantel remains.


photographs by the author
Posted by Tom Miller at 1:04 AM