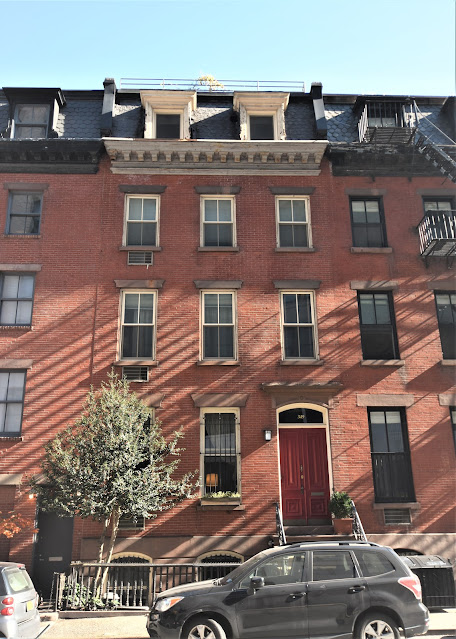 Matthew Kane was a manufacturer of window sashes.  The explosion of construction in the years following the Civil War increased both his business and his fortune.  He invested in real estate in 1868, completing a row of four upscale Second Empire style homes on West Fourth Street between West Fourth Street and Eighth Avenue.  Designed by the prolific team of brothers David and John Jardine, the homes were faced in warm orange brick and trimmed in brownstone.  Three bays wide, their most eye-catching feature was the fashionable slate-shingled mansard level, each holding two dormers.

Among them was No. 349, which he leased to Hugh McCutcheon who had recently brought his family from Newburgh, New York.  McCutcheon had been born there in 1832 and was married to the former Catherine Hurd.  The couple had four children when they moved in, 14-year old Robert Homer, 10-year old Amahel, Maria, who was five, and one-year old Carrie.  Sharing the house with the family was another Newburgh couple, J. B. Lindsay and his wife, Jennie.
McCutcheon ran a "fixtures" store at No. 96 Bleecker Street.  Not long after the family settled into their new home Robert was enrolled in the collegiate course of the City University of New York.
Tragedy struck in October 1873 when Jennie Lindsay died at the age of 29.  Her body was taken from the house on the 13th to be sent to Newburgh for burial.  It appears J. B. Lindsay left the West Fourth Street house shortly after, possibly moving back to Newburgh.
The McCutcheon family were long-term tenants, leasing the house at least through 1880.  They then moved west, to Indianapolis, where Hugh McCutcheon died in August 1883.
Matthew Kane died around 1898 and on May 4, 1899 his heirs sold the row of houses to Pincus Lowenfeld and William Prager.  It appears that all of the homes became boarding houses, and while the tenants of No. 349 were middle class, holding white collar jobs, at least one of them was less than respectable.
Clarence Mallory had worked as a collector for the commission merchant firm of S. Fish & Co. before abruptly leaving his job in September 1902.  As a collector, he had received monies owed the firm by clients, sometimes visiting them in person to do so.  On the evening of September 15 he was on an Eighth Avenue streetcar far uptown when, as it approached the intersection of 104th Street, a man began running after it, yelling at the conductor.
The New York Press reported "When he swung aboard he was out of breath, but he immediately seized a young man, and as soon as his breath returned he began to shriek.  'Police! Police!' he cried with all his might."
The young man was Clarence Mallory and his captor was his former boss, David Temmer.  The New York Press said Mallory "seemed astonished and the passengers wondered if the man was crazy."  His continued shouts of "Police!" drew the attention of Patrolman Quinn.  Temmer told him "I want this man arrested.  He was our collector and kept all the money."
Indeed, after Mallory's hasty departure from the firm, it was discovered there was a shortage of $1,800 in cash--more in the neighborhood of $55,200 today.  The breathless Temmer said "I spotted him on that car and hopped on and grabbed him.  I wasn't going to lose such a change, even with the people around."  At the station house Mallory was searched.  He had a silver sugar bowl and half a dozen silver spoons on him, which he claimed he had purchased at an auction.  After that, according to the New York Herald, "Mallory had nothing further to say."
The period just before and after World War I saw several tenants holding Government jobs.  In 1912 Anna E. Pidgeon was hired by the State Civil Service Commission as an "attendant," possibly in a jail or prison.  And in 1915 Joseph P. Boyle landed a superintendent position in the State Civil Service's Bureau of Employment at a salary of $2,000 (about $52,500 today).  In 1919 he was still living in No. 349 and earning the same pay.
In 1930 No. 349 was purchased by Sanford M. Treat.  He continued leasing rooms in the house, prompting the necessary installation of a fire escape.  At the time the molded lintels were intact.  Before long, however, they were shaved off.  Happily the other Victorian details--the understated entrance, the dormers and fish-scale shingles--were preserved. 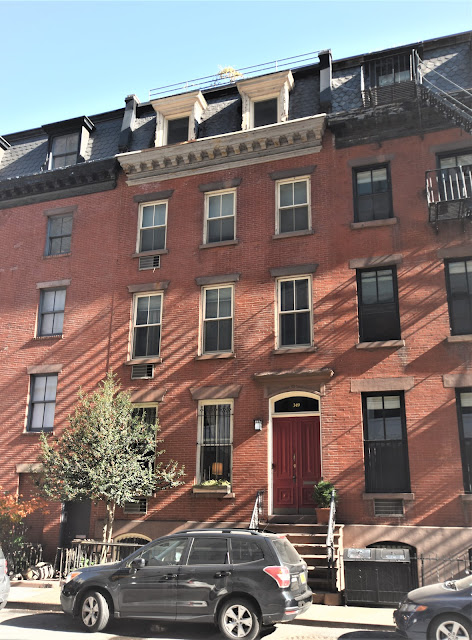 A renovation completed in 1961 returned it to a single-family home.  The unsightly fire escape was removed, bringing the McCutcheon house back nearly to its 1868 appearance.
photographs by the author
Posted by Tom Miller at 2:08 AM