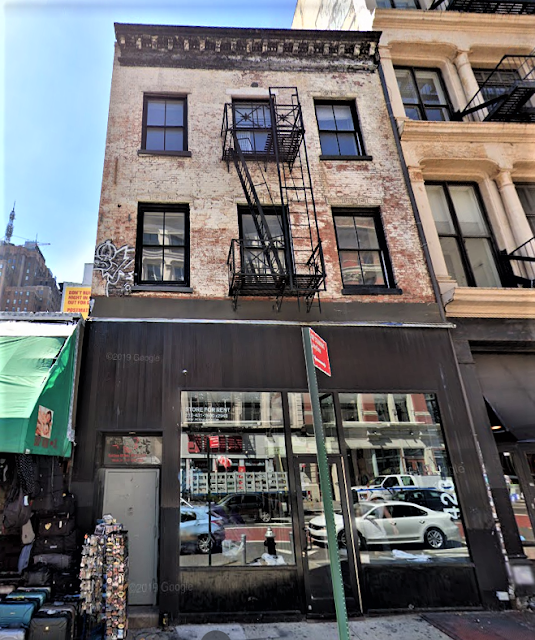 In 1822 Benjamin Lord began construction on a handsome 25-foot wide house for his family at No. 423 Broadway, just north of Canal Street.  Completed in 1823, it was faced in Flemish bond brick and was three-and-a-half stories tall with one or two dormers piercing its peaked roof.  Lord's comfortable financial status was reflected in extras like the stone lintels handsomely carved with modified Greek key motifs.  He was a ship's captain who sailed for John H. Howland and Company which had a fleet of about 16 vessels.
The wealthy mariner was much more than an employee, however.  While it does not appear he was a member John H. Howland and Company, he was definitely a heavy investor.  On May 25, 1825, for instance, the New-York Evening Post reported, "The ship Byron, owned by Mr. John H. Howland, and Captain Benjamin Lord, will be launched this day 1/4 before 3 o'clock, P.M. from the ship-yard of Smith & Demon.  She is a vessel of the first class, of about 700 tons burthen, and is designed for the Liverpool trade."
Lord ran into trouble on what most likely was the Bryon's maiden voyage.  In September 1825 the ship became stranded off the coast of Scotland and was seized by the British Government.  The "sails, rigging, and sundry other appendages of the vessel" were pulled down and placed at auction.  To save his ship, Captain Lord "bid them in," but as he attempted to sail off, was forced to pay 300 pounds duty on the "salvage," according to legal documents later.  Upon his return to New York John H. Howland and Company requested the State Department to file a claim with the British Lords to recover the amount.
The Lord family's stay in their elegant home would not be especially long.  The northward expansion of the city was both relentless and fast and by the 1840's Benjamin Lord had converted No. 423 for business.  Mary Doughtery's saloon operated from the ground floor while small businesses occupied the upper floors.  Dr. Banning and his wife leased space in 1846 when an advertisement in the New-York Semi-Weekly Tribune on October 3 touted:

Dr. Banning's Body Brace, for the prevention and relief of Drooping, Distortion and Weakness of the body, particularly of weak children and young ladies.  Also for weakness of the chest, spine, digestive and female system.  To be had at 423 Broadway.  Mrs. B. in attendance on ladies from 10 A.M. to 1 P.M. and from 3 to 6 P.M.  Merchants and druggists visiting the city may do well to examine the comparative physiological philosophy of this support, before purchasing.

The Mary Doughtery's saloon was still here in 1849 when the upper floors held the store of Lewis Tibbals and his wife, Sarah.  Lewis listed himself as a merchant and Sarah as a milliner.  John Aitken and James Miller ran their ribbon store on another floor, and dressmaker also Susan Hope rented space.
Around 1850 daguerrotypists A. Debevoise & Brother, moved in.   An early form of photography, the daguerrotype was invented in 1839.   The brothers remained at least through 1851, and in 1853 another daguerrotypist took space.  Charles Harrison placed an advertisement in the New York Herald on February 28 announcing:

Mr. Charles Harrison informs The Citizens of New York that he has opened the largest and best adapted skylight [studio] for taking daguerreotype in the United States, at 423 Broadway, three doors above Canal street.

Harrison remained in the building through 1855, after which daguerreotypist Alexander Viaseto took over the studio.  He seems to have lived in the space as well.  On June 24, 1856 he swallowed poison and was found by friends 16 or 18 hours later still clinging to life.  They "made application for his admission" to New York Hospital, according to Dr. O. G. Smith, but when the physician examined him he saw no reason to bother.  He told the New York Herald, "I saw him when he was comatose, and his recovery appeared very doubtful.  He died the next day (26th) at his home, 423 Broadway."
By now the saloon was gone, now the piano showrooms of Colburn & Nash and Bristow & Morse, who seem to have had a cooperative arrangement.  Marcus Colburn and Francis H. Nash had taught music together since 1830.  They had now branched out into selling pianos and melodeons, a type of parlor organ.  The partners offered vocal lessons in the store as well.
The piano showroom was home to Safford & Brother in 1856 and the former skylit top floor became studio of artists Joseph S. Beals and Constant Duchochois that year.  Aitken & Miller (now describing themselves as a fancygoods store) was still here and would remain until 1864 when it moved to No. 473 Broadway.
Around 1860 the attic space was raised to a full floor and an up-to-date Italianate cornice added.  William Handley ran his store in the building by 1862 when a couple walked out without paying for the goods.  Barbara Klein (who went by the alias of Catharine Meller) and Joseph Meyer were quickly arrested for shoplifting.  In the 1860's the penalties were severe.  On December 12 Barbara was sentenced to a year in the penitentiary and Joseph to two years in the State Prison.
In the first years following the Civil War venerable houses like this one were being razed and replaced by modern loft buildings.  But the Lord family chose not to do so.  Benjamin Lord had died in 1855 and his eleven children continued to lease the property.  In 1868 Le Boutiller Brothers shared the building with the upscale men's clothiers Drumgold, King & Co.
In May 1868 Le Boutillier Brothers announced that it had just imported 1,602 dozen of "the best Paris made Deschamp's kid gloves" and were selling them at a bargain price at $1.50 per pair--about $27.80 in today's money.  The advertisement promised this was "20 per cent under price, and the cheapest Kid Gloves in the city."
In the meantime, Drumgold, King & Co. advertised itself as "Merchant Tailors and Clothiers" and promised "Livery Coats Constantly on Hand."  Livery coats were worn by the servants of the wealthiest families, and were essentially their uniforms.  The fact that Drumgold, King & Co. provided them attests to the social status of their customers.
The last of Benjamin Lord's children died in 1888 and his grandchildren quickly sought to dispose of his real estate, including the old family home at No. 423 Broadway.  It was sold at auction on December 20, described merely as a "3-story brick building."
The venerable building ignored the changes within the Broadway neighborhood over the years.  In 1889 it was home to S. Hirsch & Co., which described itself as "the largest exclusive dealers in Ladies' Dress Buttons in the world."  An advertisement that year promised, "The largest and most complete assortment of Buttons of every description, from commonest to very finest imported, ever shown by any house."
At the turn of the century another men's furnishing store operated from the ground floor level.  In April 1900 two teenaged boys came in and one of them, 19-year old John McCauley, engaged the owner in conversation.  The distraction gave Percy Palmer the opportunity to steal a number of silk mufflers.  But when the pair tried to pawn the items, they were noticed by a private detective who notified police.  The owner not only identified the scarves, but McCauley.
The upper floors were home in 1907 to William Bros., neckwear; Hartogensis & Sons, jewelers; and the buying office of Grafenberg & Hayes.
Rather amazingly, as the 20th century progressed, the vintage house survived, albeit a bit battered.  The buildings to the south were demolished and replaced by a one-story structure in 1953. 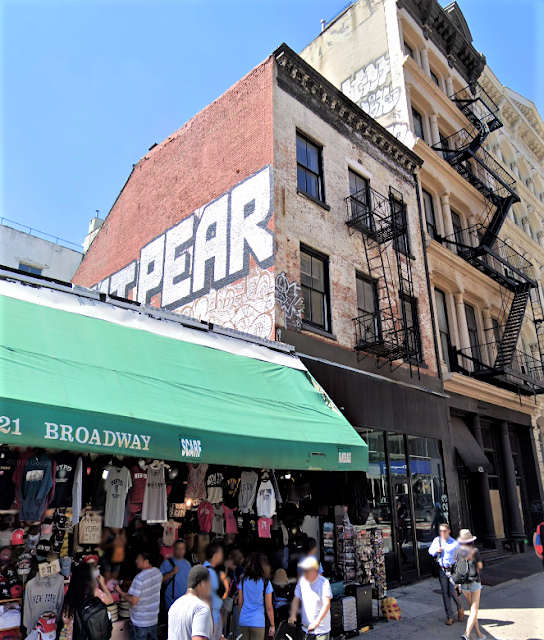 In 2017 the United American Land, LLC proposed to replace the corner buildings with a 10-story building which would incorporate No. 423.  Designed by Morris Adjmi Architects, if executed the project will include the restoration of the vintage façade and the installation of a period-appropriate storefront.
Posted by Tom Miller at 1:09 AM