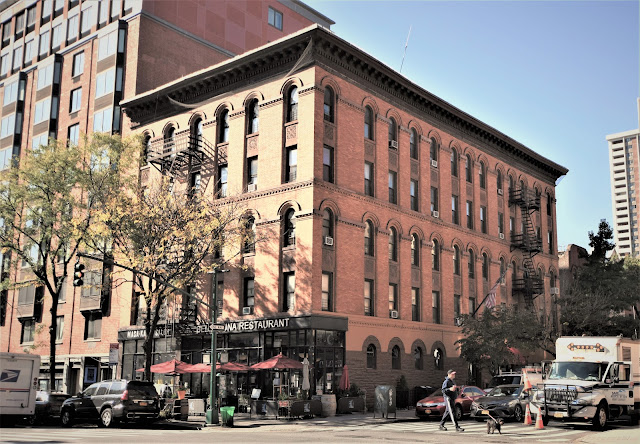 Henry C. Irons began construction on an apartment building at the southwest corner of Ninth Avenue (soon to be renamed Columbus Avenue) and 88th Street in 1893.  Designed by Jacob H. Valentine it was completed the following year.  The residential entrance to the five-story structure was located on the side street, allowing space for a store on the avenue.  Valentine married the Renaissance Revival and Romanesque Revival styles in his tripartite design.  The identical middle and top sections were separated by an intermediate cornice, each with a series of two-story arches with carved Romanesque style spandrel panels.
There was one apartment on the ground floor and two each on the upper floors.  The residents had barely settled in when a potential disaster struck.   On April 11 and 12 mysterious fires broke out in the basements of two apartment buildings, both within a block of this one.  Then, at 1:30 on the morning of May 1 it happened here.  The Evening World said the "nine families who occupy the house were in bed and everyone in the building with the exception of the janitor was wrapped in slumber."
According to that janitor, James Foley, he entered the basement to find an old mattress on fire on the floor.  He was able to extinguish the blaze with pails of water even before the fire fighters arrived, "but not before the tenants had been thoroughly frightened," as reported by The Evening Telegram.  Understandably, there was suspicion of arson.  But as investigators dug deeper, Foley's story changed.  The following day he admitted "that he had lighted a cigar near where the blaze occurred but a few minutes before the fire was discovered."  The fire was blamed on his carelessness and not on a serial arsonist.
Alfred Freeman had run a chop house on 42nd Street until 1894, when it failed.  He and his wife moved into an apartment in the Columbus Avenue building and he opened a new restaurant in the commercial space.  Unfortunately, this venture did not work out either.  Unable to pay his rent, on November 22, 1895 he was told to move his restaurant out by December 1.
That night he went to bed as usual but the following morning, according to The Evening Telegram, "he refused to get up at seven o'clock when his wife did, saying he was unwell."  Mrs. Freeman opened the restaurant and tended to business until almost noon when she went upstairs to check on her husband.
"Mrs. Freeman searched every room, and finding the bath room door locked called for help," said the article.  "The door was broken open, and Freeman was found sitting in the bath tub dead."  He had filled the tub with water, almost to the edge, then shot himself in the head.  Police surmised that he had assumed if the gunshot did not kill him, he would slip under the water and drown.
The restaurant was quickly converted to the Glenada Market.  M. I. Maibrunn had been in business with his father and then his brother on Greenwich Avenue for many years.   On December 9, 1896 The Butchers' Advocate reported "The Glenada is one of the prettiest, if not the prettiest markets on the West Side."  Maibrunn sent out business cards throughout the neighborhood which said in part:

I can safely guarantee that neither zeal nor attention shall be wanting on my part to ensure to my patrons every advantage the market affords.  I will always have on hand a select quality of meats, provisions, poultry, game, sea food and produce at reasonable prices.

Mabel C. Cameron was 19 years old at the time and lived with her mother.  (Her estranged father, a hardware merchant, was living in New Jersey.)  Mabel was well-educated and had graduated from Rutgers College in 1893.  In March 1895 she was introduced to Jules F. Schuman who, according to the New York Herald, "paid her marked attention and declared that he loved her and intended to marry her."  He wrote numerous love letters which, luckily for Mabel, she kept.
On January 23, 1896 Schuman appeared at the apartment while her mother was away.  He told her that his employer, named Kinscher, insisted that he marry his daughter "whom he despised."  According to Mabel later, "He said if I didn't marry him he would have to marry that girl, and it was so hateful to him that he could not stand it."
The following day Schuman took her to a house on 121st Street where a man, presumably a minister, married them.  Before long Schuman disappeared and later that year Mabel gave birth to a child.  Mabel tracked Schuman down when his wedding to another woman was reported on January 6, 1897.  Two days later the New York Herald reported that the newlyweds "did not go South on a wedding tour" but instead Schuman had again disappeared.  A warrant for his arrest on charges of abandonment and bigamy was filed and Mabel's lawyer initiated divorce proceedings.  (The love letters proved to be damning evidence.)
In the spring of 1898 a six-room apartment with bath rented for between $35 and $40, or about $1,430 per month for the more expensive.  By now the Glenada Market had become Otto Arndt's grocery store, which was replaced in 1902 by a fur shop.
Henry Burgerne and his wife lived in the building that year when they went on a bicycling excursion in Coytesville, New Jersey on June 15.  It ended very badly for Mrs. Burgerne.  The New-York Daily Tribune explained that while going down Woods Hill she "lost control of the machine and was dashed with great force against a barbed wire fence."  By the time Henry reached her, she was "hanging on the fence with blood gushing from a dozen or more wounds and her clothing badly torn."  He ripped bandages from his shirt to help stop the bleeding.
Finally help arrived and she was taken to a nearby house.  There Dr. Joseph Huger worked on her for nearly four hours before all her wounds were stitched closed.
Among the Burgerne's neighbors was songstress Edith Blair, described by The Morning Telegraph as "the most statuesque of all the statuesque Venus girls in John C. Fisher's 'All Heiress' sextet."  Edith had been born into privilege, the newspaper saying she was "originally a member of Buffalo's smart social set...where she was generally acclaimed 'the belle of the ball.'"
But in 1900 her fortunes turned.  Her engagement to a prominent attorney was broken and about the same time her father lost his fortune.  And so, having had some experience in society benefit operas, she turned to the stage.  Like the plot of a silent film, her career got an unexpected boost.  On January 24, 1903 The Morning Telegraph explained "She never became really well known theatrically, however, until the sudden illness a few weeks ago of Mlle. Mai de Villiers, who played the role of Venus in 'The Silver Slipper.'  Miss Blair was called upon to take this leading soprano role at a moment's notice, and scored so cleverly that her work was widely commented on."
Now another understudy would have to step in.  The newspaper reported that she had not felt well for several days and finally called for a physician.  He diagnosed typhoid fever.  The Morning Telegraph noted "At her apartments, 100 West Eighty-eighth street, last night it was said that she was resting easily and that her condition offered much encouragement."
Even more colorful than Edith Blair was playwright Mattie Sheridan.   On October 5, 1905 the New York Herald announced "Miss Mattie Sheridan, of No. 100 West Eighty-eighth street, beginning last Sunday, has resumed her Sunday afternoons.  A similar series given last season was largely attended, one of the pleasant features being the musical programmes provided."
Mattie was no doubt the most socially active of the residents.  She hosted the Saturday evening gatherings of the Hungry Club, which had a membership of more than 150.  On October 27, 1907 the New York Herald opined "Miss Sheridan very acceptably fills the role of toast mistress and the after dinner programmes provided by her are of unusual interest."
Earlier that year she had traveled to Florida for health reasons.  On May 12 the New York Herald reported  "Her friends are congratulating her upon her restoration to health, also upon the presentation of ten acres of land in Platt City, Fla., where the friends who gave the property to Miss Sheridan will within a short time erect for her a Mexican patio."
Mattie was highly involved with the theater and offered to critique plays from her apartment.  Her advertisement in the New York Dramatic Mirror on June 10, 1914 boasted:

I know half of the managers, one-third of the actors in America; I have been a dramatic editor and have written much requiring literary ability; I am author of a play which has been acted continuously since July, 1911.  I will read your play carefully and give you a conscientious criticism for a fee of $5, which must accompany play.

The Sun referred to Mattie as "a confirmed first nighter," referring to the group of socialites who made it a point to attend the opening night of new plays.  The newspaper noted "She wrote several vaudeville sketches, and [in 1915] she began a one act play on Friday, finished it Saturday, selected her company on Sunday and rehearsed it Monday.  A week from the following Tuesday the act was produced, and two days later it was booked over a circuit for a substantial run."
In December 1916 Mattie Sheridan was diagnosed with Bright's Disease.  Just two months later, on February 9, 1917, she died in her apartment at the age of 56.  In reporting her death, The Sun said "For many years Miss Sheridan was a leader in a bohemian set whose members included many literary persons more or less well known."  The New York Dramatic Mirror added, "She was one of the most popular of the women writers on and for the stage and was a confirmed first-nighter."
By now the Columbus Avenue space was home to Misnik Bros., a furniture store.  It remained at least through 1919.
The post-World War I years saw the demographics of the neighborhood change and the first Black residents moved in by the early 1920's.
Among them was Nathaniel Matthews who was involved in a horrifying hit-and-run accident on the night of November 30, 1922.  The 29-year old was crossing Lenox Avenue near 136th Street when he was struck by a taxicab.  The New York Herald reported "The chauffeur did not stop, but raced north in Lenox avenue."  An off-duty policeman chased the cab in his own automobile, eventually arresting Ralph Rosenfeld in a garage at 141st Street and Fifth Avenue.
The incident--deemed by many to have been an attack and not an accident--had many witnesses.  Now an irate crowd attempted to wrest Rosenfeld from Officer Mandell.  "Two negroes, friends of Matthews, urged the crowd, the majority of whom were negroes, to take the law into its own hands and Mandell was rapidly getting the worst of it when patrolmen from nearby beats and later the reserves arrived."
On the night of March 25, 1934 resident Chris Viachos and two friends went to a coffee shop on the second floor of No. 632 Second Avenue.  Suddenly three strangers entered "and attacked them with knives," according to police.  The New York Sun reported "after a brief skirmish the assailants fled."
At the urging of the United States, the Soviet Union took a role in the establishment of the United Nations in 1945.  The following year the Soviet delegate to the U.N., Andrei A. Gromyko, leased the four top stories of the building "to quarter the minor members of his staff," according to The New York Sun on October 24, 1946.
A renovation in 1947 resulted in four apartments per floor, doubling the amount of rentable space.  The Columbus Avenue store continued to see commercial tenants come and go throughout the decades.  In 1956 Jim's Express, a moving company run by a young Army veteran was in the space, and in 2017 the Italian restaurant Bella Luna, which had been located one block away for 30 years, moved in.
photographs by the author
Posted by Tom Miller at 1:15 AM