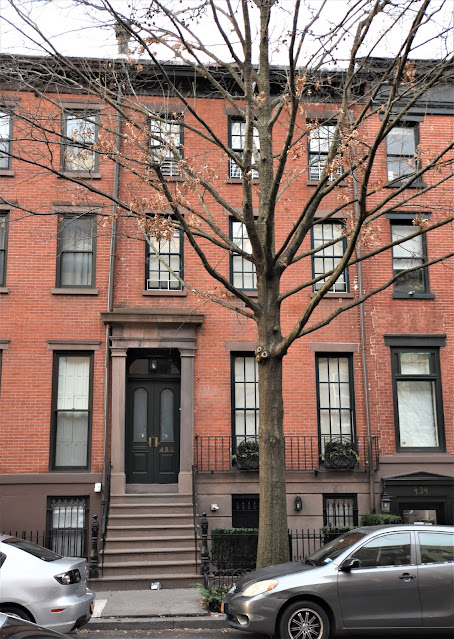 Shakespearean actor Edwin Forrest constructed three speculative homes at Nos. 430 through 434 West 22nd Street between Ninth and Tenth Avenues in 1843.  He most likely worked in partnership with James Phelan, who simultaneously erected three essentially identical houses at Nos. 424 through 428.  Faced in red brick and sitting upon brownstone English basements, each of the houses rose three floors.  Their entrances were typical of the Greek Revival style--Doric pilasters upholding a beefy, corniced entablature.  The openings were trimmed in brownstone and capped with molded lintels, and a simple cornice unified the row. 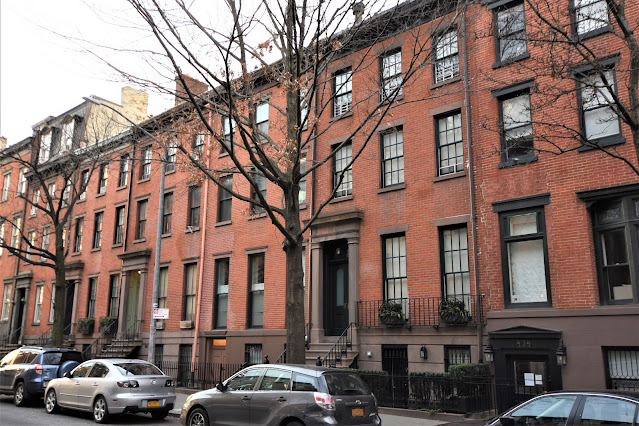 In 1854 the owners of the recently redecorated No. 292 West 22nd Street (renumbered 432 in 1863) had extra space in their 19-foot wide house.  Their advertisement in the New York Morning Courier read:

Board--Two or three single gentlemen, or a gentleman and his wife can be accommodated with very pleasant rooms, with board, at No. 292, West 22d street; between 9th and 10th avenues, accessible by cars and stages.  House contains all the modern improvements, and location very pleasant.

(The sale price would equal around $191,000 today.)
The house changed hands twice before Louis Saint Lanne purchased it in September 1922.  By now the neighborhood was not nearly so upscale as it had been 75 years earlier and Saint Lanne converted No. 432 to a rooming house for 15 tenants.
Among his tenants was the once-popular entertainer Dave Christy, born Lyman Van Valer in 1853.  Variety magazine described him as a "minstrel, balladist and actor."  He had started his career around 1882 with well-known acts like Harrington and Hart, McIntyre and Heath, and with Lester and Allen.  For several seasons he appeared in minstrel shows in San Francisco.
Christy, who never married, turned from vaudeville to the legitimate stage in 1889, with roles in popular plays like The Old Homestead, The Heart of Maryland and, in 1914, My Best Girl, which was possibly his last stage appearance.
As Christy's health declined, the Actor's Fund provided him a weekly stipend which paid his rent here.  He died in his room on May 15, 1926 at the age of 73. 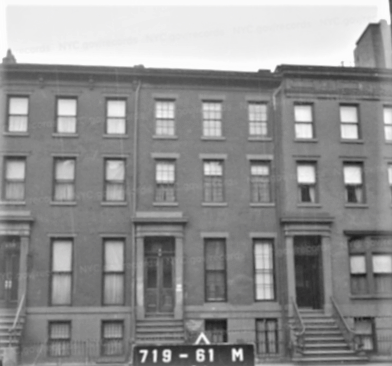 The lintels had already been removed when this photo was taken around 1941.  via the NYC Dept of Records & Information Services.
No. 432 was converted to apartments, one per floor, in 1950; and then in 2006 it was renovated to a single-family home.  Although the window cornices were shaved off at some point, the house looks little different since Mary Fraser made her 1885 "improvements." 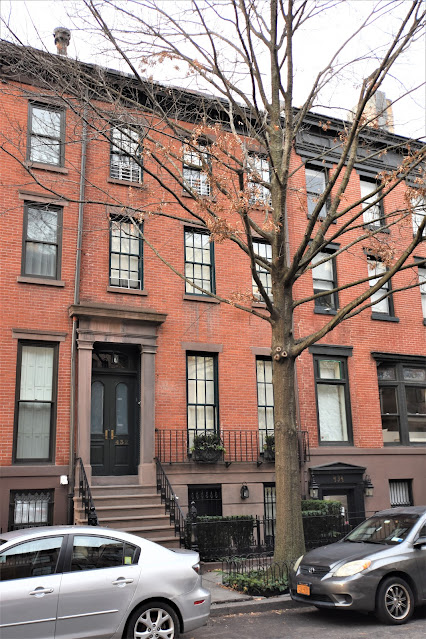 photographs by the author
many thanks to reader Jason Weinberg for suggesting this post
Posted by Tom Miller at 1:13 AM