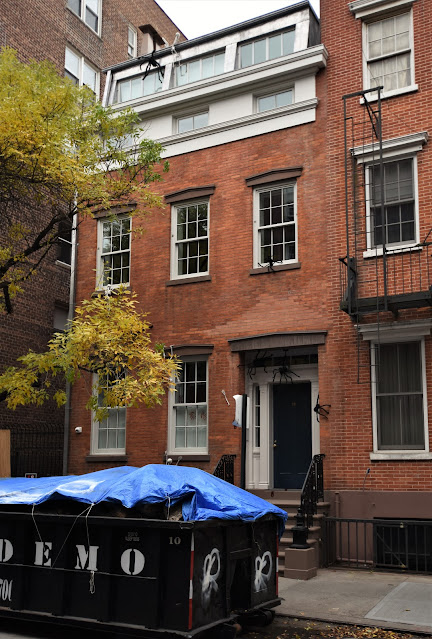 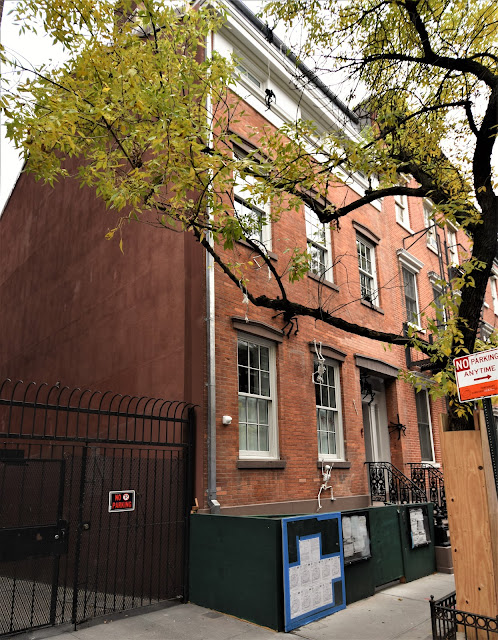 Geoffrey Pope was 24 years old in 1936 and a bookkeeper at Macfadden Publications, where he had worked for three years.  He and another bookkeeper there, Sheldon Taylor (who coincidentally was also 24 years old) talked about the excitement of adventure and the boredom of bookkeeping.  The two saved up $1,000 and, after four months of planning, resigned their jobs on April 21, 1936 and set off on an exploit.
On April 26 The New York Times reported "Paddles digging deep, two young adventurers pushed off in a seventeen-foot canoe from the foot of West Forty-second Street yesterday morning, bound for Nome, Alaska, by way in inland waters."  They shoved off at 10:20 that morning after the tide had turned.  Onlookers yelled "Give my regards to the Eskimos" and "See you in two years!"
By 1938 No. 19 was home to Frederick and Elsie Buchholz and their daughter, Dorothea Buchholz.  Frederick, known as Fred, was the secretary of the Society of Independent Artists, which used the house as its de facto headquarters.   It was most likely the Buchholzes who added the art studio on the roof.
Dorothea followed in the arts and by 1953 was an instructor at the Dance Education Center at No. 68 Fifth Avenue.  The family was listed in the Bethune Street house through 1959.
The tradition of the arts at No. 19 continued in the 1960's with the family of Harry Ulanov.  When the engagement of daughter Anne to Alfred M. Pietrasanta was announced in October 1965, The New York Times mentioned that she was "a granddaughter of the late Norman Bel Geddes, the designer and theatrical producer."
Other than its long history of housing boarders, No. 19 was never altered into apartments.  While expected interior updating has been done, much of the 1837 Greek Revival detailing survives.
photographs by the author
Posted by Tom Miller at 1:15 AM