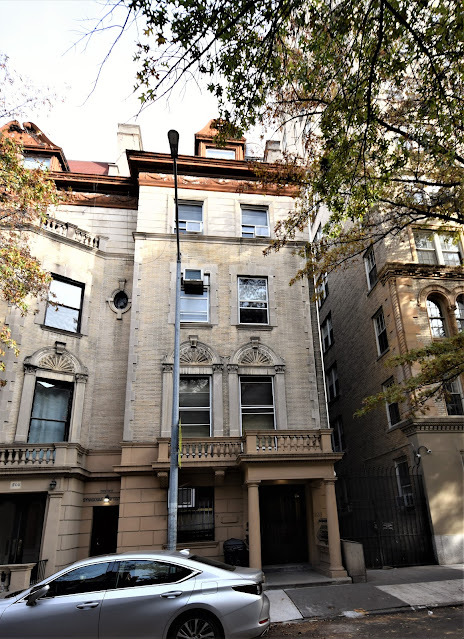 In 1896 real estate operators Perez M. Stewart and H. Ives Smith, partners in Smith & Stewart, commissioned one of the Upper West Side's most prolific architects, Clarence F. True, to design a row of seven upscale houses along the north side of West 91st Street between West End Avenue and Riverside Drive.  The neighborhood was already filling with substantial homes and True's Renaissance Revival residences would follow suit.
Each of the high-end homes cost $22,000 to construct--more than $690,000 in today's money.  Completed in 1897, the 25-foot wide homes were four-and-a-half stories high and faced in beige brick.  No. 303 projected slightly forward from the others, providing a visual anchor for the group.  The offset entrance, just inches above the sidewalk, sat within a columned portico that provided a stone balustraded balcony to the second floor.  The tympana above the second floor openings were decorated with handsome carved shells.  The single dormer at the mansard level was capped with a graceful swan's neck pediment.  Inside were eleven main rooms, three tiled bathrooms, and three servants' rooms.
On April 18, 1897 an advertisement in the New-York Tribune read:

The advertisement warned "Nos. 305, 307, 313 and 315 SOLD."  A subsequent ad for the two remaining houses noted "watchman always on premises" and "neighborhood is restricted."  Private watchmen--what might be called security guards today--were commonly employed by residential groups.  And a restricted neighborhood meant that commercial interests--like stores and restaurants--were banned.
Surprisingly, No. 303 did not sell until the following spring.  Finally on March 9, 1898 The New York Times reported on its sale to George Clinton Miller.
Miller was well-known in the city.  Born on January 10, 1855 his earliest American ancestors had arrived in Nantucket on May 30, 1630.  Although trained in law, he took a job with Thomson, Langdon & Co., corset manufacturers.  The firm was known internationally as "Corset Giants."  Six years before he moved into No. 303, Miller had been taken in as a partner.
Just five months after moving into his new home Miller contracted pneumonia.  He died in the house on August 6, 1898 at 43 years old.  The New-York Tribune wrote, "Inspired with a love of country, it was not strange that he always from youth wanted to be a defender of his country in case of trouble.  For that reason he entered the National Guard in 1873...At the time of his death he was captain of Company G of the 122d Regiment, N. G. N. Y."
Accordingly, Major S. Ellis Briggs, commandant of the Old Guard of the City of New York commanded, "The members of the organization will attend the funeral (citizens' dress) on Monday [August 8] at eight o'clock P.M., from 303 West 91st st."
The house next became home to Charles E. Diefenthaler and his wife.  Born on May 9, 1863, he was a member of B. Fischer & Co., coffee dealers.  He was, as well, secretary and director of the New York Fire Proof Stabling Co., and a director in the American Encaustic Tiling Co.  His wealth and social standing were reflected in his memberships to the Riverside Yacht Club, the New York Athletic Club and the Arion Society.
Art patrons, the Diefenthalers were both members of the Municipal Art Society of New York.  And Mrs. Diefenthaler, like almost all socialites, involved herself in worth causes.  She was, for instance, a supporting member of the American Association for the Study and Prevention of Infant Mortality. 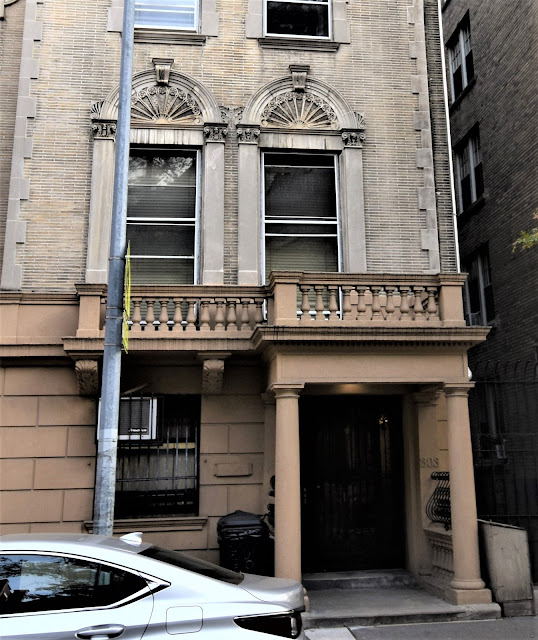 On January 22, 1915 The Evening World reported on the engagement of Dorothy Conron to James Butler, Jr.  The article called Dorothy "one of this season's buds, having been introduced to society a month ago" and noted "Miss Conron and Mr. Butler are popular in the younger set."  Even those out of touch with high society would recognize the groom's name.  He was the son of the founder of the first American chain of grocery stores, the James Butler Grocery Company.
Four months later, to the day, The National Provisioner reported, "Joseph Conron, the well-known poultry and beef man, who has branches all over the country, whose daughter is to marry James Butler, Jr., son of the big grocery man, has presented his daughter with the five-story dwelling house at 303 West 91st street, as a bridal gift.  It is one of the finest houses on the upper West Side."  The New York Press added "The deed to the house will be presented on the day of the wedding."
The couple was married in St. Patrick's Cathedral on June 2 by Cardinal John Murphy Farley.  In reporting on the wedding, The New York Sun noted "Among the wedding presents was the house at 303 West Ninety-first street, a gift of the bridegroom's father, where Mr. and Mrs. Butler will make their home."
James Butler, Jr. was known more for his tennis game than for his business acumen.  His name routinely appeared in the society pages as he played in country club tournaments.  But world war interrupted the newlyweds' domestic bliss.  Both James and his brother, Pierce, joined the army.
On June 16, 1918 The Sun reported on soldiers and sailors who had been added to the Catholic Club's honor roll.  Among them was James Butler, Jr.  Both he and his brother had been promoted to lieutenant by then and both were serving in France.  Tragically, five months later on November 26 the New-York Tribune reported "Word was received yesterday of the death from wounds of Lieutenant Pierce Butler."  The 23-year old "was wounded by machine gun fire in the battle of the Argonne Forest."
James survived the war and he and Dorothy picked up their social routine upon his return.  They remained in No. 303 until April 1922 when Dorothy sold it to James H. Jowett for about $65,000 (just over $990,000 today).
Born in Cleveland on September 15, 1874, Jowett was the executive vice-president of the Ingersoll-Rand Company.  His entire career was with the firm.  Railway Age explained on February 25, 1933 "He entered its employ as a draftsman and rose successively through the positions of engineer, salesman, manager of the New York sales branch office, assistant general sales manager, and general sales manager until he was elected a vice-president and director."
Jowett and his wife, the former Genevieve Elder, had a daughter, Lucille.  Like his predecessors in the house, he held impressive club memberships, including the Downtown Association, the Engineers Club, the Union League, the Racquet and Tennis Club, the Wykagyl Country Club and Indian House.
In 1932 Jowett became ill.  He was eventually taken to Flower Hospital where he died at the age of 58 on February 16, 1933.  The West 91st Street house was in his name--somewhat surprising at a time when the title to residential property was almost always placed in the wife's name.  But, interestingly, Genevieve and Lucille were relieved from the tax burden.  On November 7, 1933 The New York Sun reported that the estate "have been released from the lien of the estate tax by the State Tax Commission."
Genevieve remained in the house at least through 1937.  In 1939 the New York Trust Company sold it to "an investor [who] plans to occupy the house," according to The New York Sun on July 5.
That was not quite true.  A renovation completed in 1942 resulted in a "reception room and children's recreation room" on the first floor, a living room, dining room and kitchen on the second, and furnished rooms in the upper floors.
Then the house was purchased by the Vorhand Shul and a renovation completed in 1961 resulted in a synagogue on the first floor, a duplex apartment on the second and third, two apartments on the fourth floor and one on the fifth. 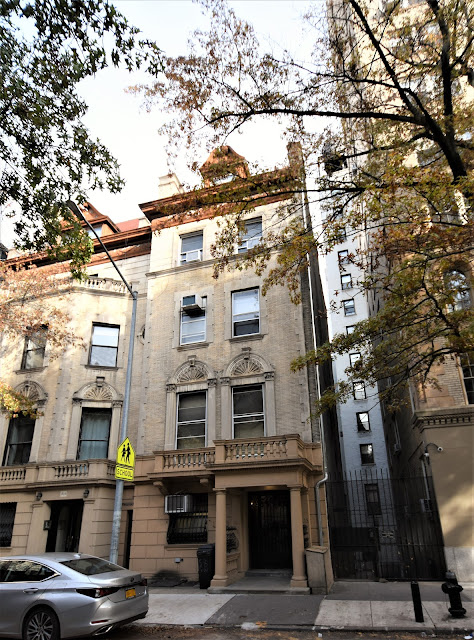 The Vorhand Shul, known familiarly as "Rabbi Vorhand's Shul," continues in the house today.  Other than replacement windows and unfortunate window air conditioners, the exterior is essentially untouched since its completion in 1897.
photographs by the author
Posted by Tom Miller at 3:24 AM