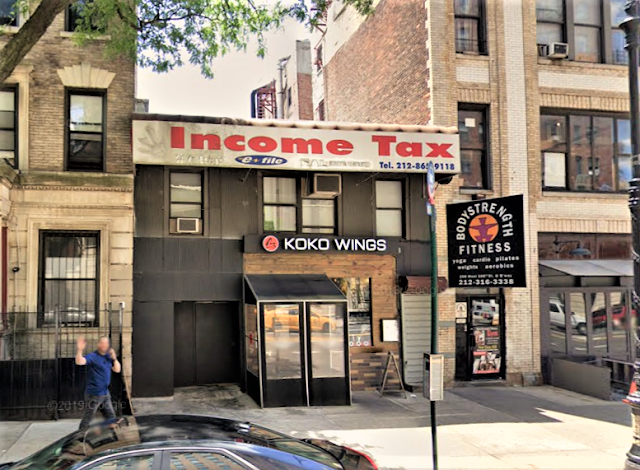 The building's quaint late Victorian personality has been successfully obliterated by metal panels.
Around 1893 a 25-foot wide, two-story store was erected at No. 248 West 106th Street, just east of Broadway.  Most likely designed by the builder, the wooden structure drew on the Italianate style of a generation earlier.  Its cornice sat upon scalloped brackets and simple but prominent lintels graced the upper windows.
The store was run by German immigrant Louis Zimmermann in the late 1890's.  He had been trying to collect $40 from Alpheas J. Goddard for some time in the fall of 1898 when, in desperation, he headed off to the man's flat on West 103rd Street on October 28.
Zimmermann might have thought twice about confronting him had he known that Goddard was currently being sued for assault by a collection agent, Thomas T. Crean.  That man had gone to Goddard's office and, according to The New York Times, "instead of serving the paper, he alleges, he was severely punched by Goddard."
When her husband did not come home that night, Mrs. Zimmerman became anxious.  Unable to speak English, the elderly woman searched frantically for two weeks before going to the Legal Aid Society for help.  Two weeks later investigators discovered that Louis Zimmerman was dead and buried.
The mystery of his death was still unsolved seven months later.  But the facts were coming out.  Mrs. Zimmerman presented the Assistant District Attorney Unger a letter from the General Counsel of the Legal Aid Society that intimated her husband had been murdered.  Investigators had discovered that a 12-year old boy, John Day, had directed Zimmermann to Goddard's building and taken him to the apartment on the third floor.
According to the boy, Goddard told Zimmermann he would have his money the next week, and Zimmermann replied he had rent to pay.  He remembered Goddard saying, "You get out of here or I'll throw you down the stairs!"
As the argument became increasingly heated, Daly started to leave, telling a reporter from The New York Times, "I started down stairs, as I thought there might be trouble."  And there was.  Just as the boy reached the ground floor, he heard Zimmermann crashing down the stairs.  Daly turned back to find the old man at the second floor landing.  "He was all doubled up, and the blood was running from a big cut in his head," he said.  Louis Zimmermann was dead, his neck broken in the fall.
Zimmerman's body was taken to an empty flat.  Police later instructed that it remain there until the coroner gave permission to remove it.  Instead, Goddard had it rushed to an undertaker and paid for the burial.
A grand jury convened on July 6, 1889.  Among the witnesses was the janitor of Goddard's apartment house.  He testified that Goddard had instructed him to clean up the blood and to burn Zimmermann's hat.  "It was my impression that the hat had been put on Zimmermann's head after he fell.  It looked that way, for it was not dented," he told the jury.  When he balked at burning the hat, "I was ordered to do as I was ordered and keep my mouth shut," he said.
Despite that and other damning evidence, the jury decided Zimmermann had died by falling down stairs "in a manner unknown to the jury."  Mrs. Zimmermann, who had cried throughout the procedure, asked Goddard for the $40.  The New York Times reported, "He finally paid her $10, which he said was all he owed."
At the time of the heart-wrenching hearing Power Bros. had been located on Broadway just south of Central Park for years.  On January 13, 1900 The Record & Guide reported "Power Bros., the well-known plasterers, have removed from No. 1764 Broadway to their new office and shop, No. 248 West 106th st. near Broadway, a location convenient to the West Side building trade.  This firm are long established, and have every facility for doing large work."
The firm, which was composed of Robert and David P. Power (their brother Lorenzo had died five months earlier), advertised itself as "Plain & Ornamental Plasterers."  Title to the 106th Street property was in Robert's name.   Neither of the partners lived in the upper floor apartment, instead leasing it for extra income.
Although Robert Power sold the building in December 1909 to Alma C. Stem, Power Bros. continued to lease the commercial space.  In 1911 Robert Powers advertised his 1909 Oldsmobile 4-cylinder touring car for sale.  The ad promised that it was in good condition and "fully equipped," and said it could be seen at No. 248 West 106th Street.
In 1911 Alma Stem reduced Power Bros.'s square footage by carving a second store out of the ground floor space.  The smaller store became a laundry in 1912, operated by a "Steindler." 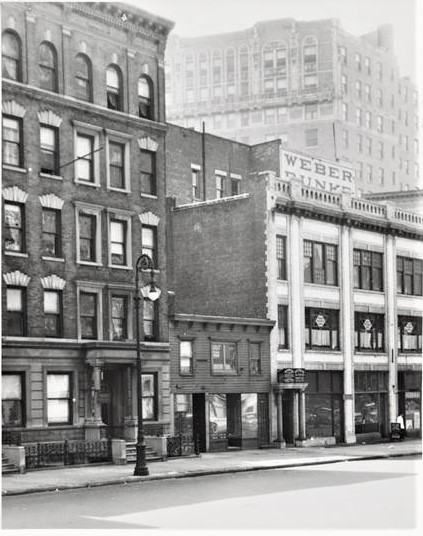 The renovations created a smaller store at the east side and the Power Bros. space received a modern arcade storefront.  photo by Charles Von Urban from the collection of the Museum of the City of New York
Power Bros. remained at least through 1914.  By 1916 their former space was occupied by the Broadway Auto Repair & Supply Co., operated by Charles Lurie.

Motor Cycle Illustrated, January 6, 1916 (copyright expired)
Lurie's shop would remain in the location into the 1920's.
In the meantime, the apartment upstairs was home to a fascinating tenant.  Robert S. Heilferty was born in 1847.  According to the New York Post, "He ran away from his home in Bloomingdale--what's now the W. 105th St. neighborhood--five times before he succeeded in getting into the Union Army, at the age of 17."
Heilferty recalled the time in 1864 when President Abraham Lincoln visited the troops at City Point, Virginia.  The New York Times recounted:

"How do you like the war?" asked the President, slapping him on the back.

"War's all right," young Heilferty replied.  "I just don't like the shooting!"

Heilferty gave his opinions regarding subsequent wars.  As regarded the Spanish-American War he said "I don't know what you'd call that one--But Col. Teddy was pretty good."  He called World War I, "murder." 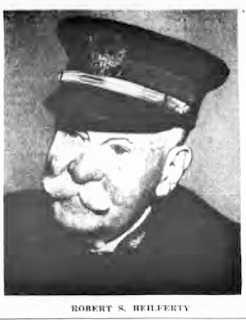 New York Post, May 30, 1941
The old veteran was still living above the store on February 1, 1939 when he visited Mayor Fiorella LaGuardia's office in City Hall.  The mayor honored him and the other 13 surviving members of the Grand Army of the Republic that day.  Heilferty died on October 16, 1942 at the age of 95. 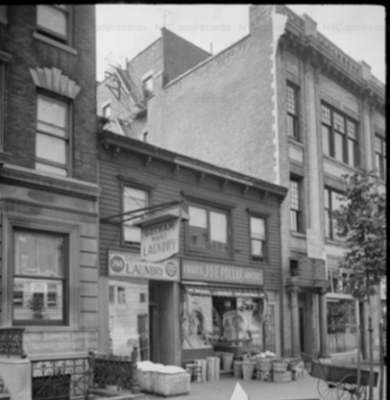 Joe Pollack stacked produce in baskets and crates on the sidewalk out front around 1941.  via the NYC Dept of Records & Information Services.
In the 1940's the larger ground floor space was home to Joe Pollack's grocery store, while a laundry still operated next door.
By 1979 the grocery store had become home to a deli run by Anastoasios Kassimis.  The former laundry space was now the headquarters of Columbia Tenants Union, founded in the early 1970's to organize tenants of property owned by Columbia University.  One member, Bruce Bailey, held an "open house" here twice a week "for troubled tenants from all over Manhattan," according to his wife, Nellie Hester.  Bailey's work for tenants' rights did not sit well with everyone.  In June 1989, after having been missing for two days, his dismembered body was discovered in the South Bronx.
In the early 2000's the Riverside Copy shop occupied the larger store, and in 2009 the East Dumpling House restaurant opened.  It was replaced by Koko Wings, a Korean restaurant which is still in the building.
Tragically, the charming wooden Victorian structure has been disfigured by metal panels.  What was a quaint relic on the block has become an eyesore.
many thanks to reader Suzanne Wray for prompting this post
Posted by Tom Miller at 1:12 AM