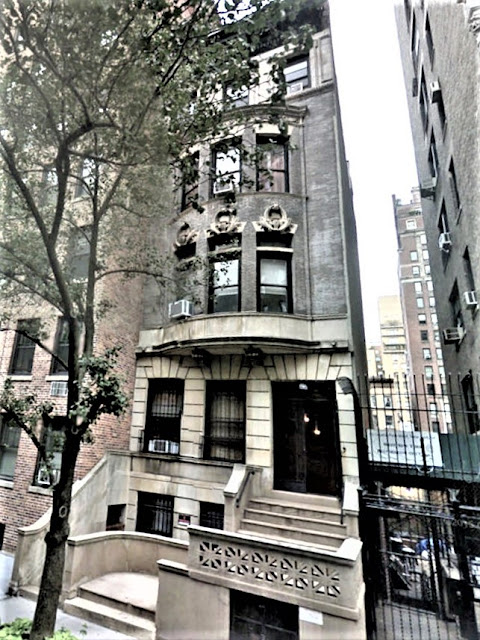 Architect Alexander M. Welch was known for designing high-end homes, very often on the east side of Central Park.  But in 1895 he was hired by builders James A. Frame & Son to design a row of five 20-foot wide homes on West 69th Street, just off Central Park West.  The developers had purchased the parcel from Clara Sachs for $75,000--or about $2.36 million in today's money.  The firm promised the homes would have "all modern conveniences."
Completed the following year, the Renaissance Revival residences rose four stories above an English basement level.  The rusticated limestone base of No. 9 West 69th Street sat above a dog-legged stone stoop.  The two-story midsection, faced in gray Roman brick, featured a rounded bay.  Decorative blind roundels and palm fronds adorned the lintels of the second floor.  The fourth floor was clad in paneled limestone.
It was sold in October 1896 to John J. and Julia Mitchell.  The couple paid about $50,000 for their new home--in the neighborhood of $1.57 million today.  As was common, the title was placed in Julia's name.
Mitchell was president of Mitchell, Vance & Co.  Founded in 1854 it manufactured and designed light fixtures, clocks and bronzes, and ornamental metal work.  While Mitchell busily oversaw his well-known business, Julia focused on things more social.  On March 26 1899, for instance, the New York Herald reported "Miss Marion E. Coppernoll gave an interesting talk on 'Famous Folks and Their Families' Friday morning last at the home of Mrs. John Mitchell, No. 9 West Sixty-ninth street."  On the same page an article about Mrs. John H. McCarthy's afternoon luncheon listed Julia as one of the guests.
The Mitchells remained in No. 9 for more than a decade, selling it on April 28, 1908 to Meyer A. Bernheimer.  Interestingly, he immediately transferred title to Alice, Cora A. and Blanche A. Bernheimer.
Bernheimer was one of eight children born to Isaac and Isabella Bernheimer.  He and his brother Jacob were partners in Jacob S. Bernheimer & Bro., the cotton converting firm founded by their father.  Meyer was more visible, however, in his real estate dealings.  His father had branched into real estate and mining interests before his death and Meyer followed suit.  He bought and sold Manhattan properties and owned vast properties in the Far West.  In 1917 he would purchase silver mining properties in Montana.
The Bernheimer girls involved themselves in Jewish causes.  Blanche was involved with the Hebrew Technical Institute and Cora was a member of the National Council of Jewish Women.
The Bernheimer family and their neighbors along the block lived in quiet opulence, surrounded by the trappings of the well-to-do.  Their homes were filled with silver flatware and serving pieces, paintings and sculpture and expensive bric-a-brac.  And they were the constant targets of stealthy burglars.
In 1914 the neighbors organized the Sixty-Ninth Street Property Owners' Association for their own protection.  Meyer Bernheimer told a reporter from the New York Herald, "the property owners decided that there were too many burglaries in the neighborhood and hired special watchmen, one for day and one for night duty."  Unfortunately, the regular policemen bristled at the move, seeing the private watchmen as an insult to their own capabilities.  When the association asked that the watchmen be supplied with special police badges, the police commissioner refused.
One night in December the night watchman, Leo A. Carey, heard a loud police whistle being blown by one of the Bernheimer maids--the signal that help was needed.  He rushed to the house and detained Thomas McCoy.  The New York Herald reported "The man was caught while trying to escape a maid in the Bernheimer home at No. 9 West Sixty-ninth street.  One hundred dollars' worth of silverware had been taken."  (The foiled heist would be valued at about $2,640 today.)
The responding policemen were less than congratulatory to the watchman.  The New York Herald recounted "According to Mr. Bernheimer, Carey hardly had his prisoner locked up when detectives arrived at the Bernheimer home and asked upon what authority Carey made the arrest.  Mr. Bernheimer says that this has been the practice ever since the request for special police badges for the watchmen was refused by the Police Commissioner."  The article noted "That the block needs more protection, the property owners assert, is shown by the fact that in the last few months Carey has made no fewer than seven arrests on charges ranging from burglary to disorderly conduct."
World War I brought with it considerable anti-German sentiment.  It prompted some German-American run businesses and institutions to change their names to something less German-sounding.  One wonders about the conversations that went on within No. 9 West 69th Street before Charles Daly Bernheimer changed his surname to Burnham before joining the United States Army Reserve Corps.
Charles rose to a captain in the Quartermaster Section.  Shortly after the war's end, on June 24, 1919, he married Estelle White King.
The Bernheimer family left West 69th Street within a few years, moving to No. 42 West 58th Street.  Meyer A. Bernheimer died there on October 18, 1928. 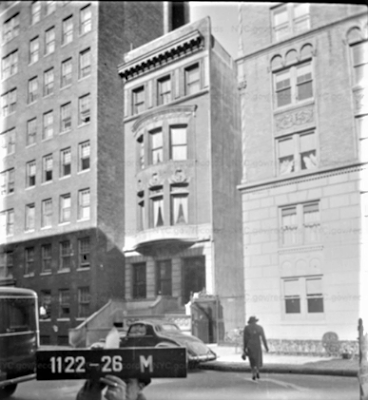 By the early 1940's No. 9 was the sole survivor of the 1896 row.  via the NYC Dept of Records & Information Services
By the Great Depression years the former Bernheimer house was being operated as a respectable rooming house.  Among the tenants in 1937 was Peyton Fentrell McLamb.  A graduate of West Point he was married to Esther Marie Johnson that year.  His bride was a graduate of the University of Kansas.
After surviving, essentially, as a private residence for eight decades, No. 9 West 69th Street was converted to apartments in 1977.  It was the last standing house of the 1896 row.  Much of Alexander Welch's handsome interior elements survive while the exterior is nearly unchanged.
photographs by the author
Posted by Tom Miller at 1:58 AM