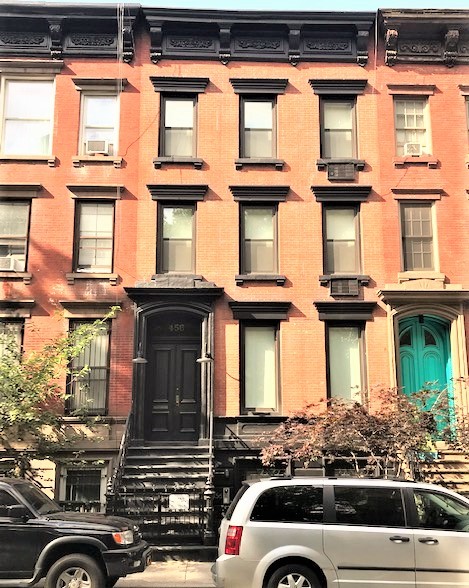 In 1860 a row of handsome Italianate style homes was erected on the south side of West 25th Street, between Ninth and Tenth Avenues.  The 20-foot wide brick-faced residences reflected the latest in domestic taste--with high stone stoops, substantial Italianate cast iron fencing, and paneled and bracketed cornices.

No. 456 first became home to James W. Gillies and his family.  As the first Independence Day neared in 1865--just three months after the end of the Civil War--the family festooned with house with patriotic decorations, called "illuminations" at the time.  They most likely included red-white-and-blue bunting and flags hanging from the doorway and windows.  The Gillies's display was elaborate enough to be included in the Metropolitan Police list of "notable illuminations."

A well-to-do builder, he was the principal in James Gillies & Sons, "contractors for cut stone work."  The firm was best known for fashioning stone monuments.  He was, as well, president of the New-York Oil Creek Petroleum Company.  When he erected his new "two-story brick stone cutters' shop" on Twelfth Avenue and 50th Street in 1874 he was listed not only as the owner and builder, but as the architect as well.

Gillies's was married to Kate Munn Lilburn, the daughter of Adam Lilburn who was described as "one of the leading brick manufacturers of Haverstraw, New York."  The two sometimes partnered in real estate dealings, co-owning a "tenement and store" on Ninth Avenue and 21st Street, for instance.

The well-heeled couple were members of the Broadway Tabernacle on Sixth Avenue and 34th Street.  Their affluence was evidenced in Gillies's expensive pastime, racing trotters.  Owning and stabling thoroughbred horses was a hobby of the wealthy and Gillies's animals repeatedly appeared in the newspapers.

On May 12, 1869, for instance, the New York Herald mentioned "Mr. James W. Gillie's [sic] brown Henry Clay horse Dick was trotting very fast on Monday afternoon on McComb's dam road, regardless of dust and danger.  It takes a 2:30 horse to stay with him when at speed, and a better one to be him."   And on September 5, 1874 the newspaper described "Mr. James W. Gillies' spanking pair of bay roadsters, who are speedy and of very attractive appearance."

James Gillies & Sons would continue to be well-known for creating monuments for decades.  But James W. Gillies was personally involved in real estate speculation as well.  In the summer of 1870 he purchased "a splendid tract of land situated four miles from the Hoboken Ferry" in New Jersey, as described by the Real Estate Record & Builders' Guide.  The journal said "Nearly as large as our Central Park, it is the largest plot of ground ever purchased so near New York by any one purchaser."  Gillies laid plans to develop it into an elaborate recreation area, with a race track, "hotel, grand stand, stables and outbuildings."

In 1858 the city's magnificent Crystal Palace, originally erected for New York's World Exposition, burned to the ground.  A second Crystal Palace was proposed in 1872; this one to be "a perpetual World's Fair, Trade Mart, Garden of Plants and popular Art Museum" engulfing a site from 98th to 102nd Streets, from Third to Park Avenues.  When  subscriptions to the massive project were solicited, James W. Gillies gave $1,000--closer to $22,000 in today's money.

On May 5, 1878 (the same year James Gillies was elected a fellow of the National Geographic Society), an advertisement appeared in the New York Herald that read:


It was not unusual for monied families to rent unused space in their homes.  James and Kate were asking about $530 per month in today's money for the entire floor.  Isabella Donnelly, the widow of Henry Donnelly, moved in with her 23-year old son, Terrence H.  Sadly, Terrence died the following year on October 25.  His funeral was held in the Gillies house three days later.

The tragedy was repeated five years later.  Like Isabella Donnelly, James Bell was widowed.  He moved into the Gillies's house with his daughter, Annie.  The 18-year old girl died on August 8, 1884 and once again a funeral was held in the parlor.

The Gillies sold No. 456 around 1890 and moved to a fine residence at No. 32 West 51st Street.  No. 456 became home to the Schlott family.  Joseph Schlott's wife was the former Helene Hundt.  Their daughter, Emma L. Schlott, was a teacher in the primary department of Grammar School No. 33 on West 28th Street.

In March 1892 Helene was looking for domestic help.  Her advertisement read "Wanted--A Strong Girl for general housework; wages $12."  Although her description sounded somewhat grueling, the weekly pay--equal to about $350 today--was enticing.

Like the Gillies had done, the Schlotts rented spare rooms.  And like the Gillies, they encountered tragedy in doing so.  In 1907 a young couple, Mary and Louis McClure, took rooms.  The lovebirds had eloped from Canada.  Louis got a job as a waiter in a Tenth Avenue restaurant, and in October Mary gave birth to a baby girl, named Rosalind.

It appears that Mary suffered from what today we would recognize as postpartum depression.  A newspaper said that since Rosalind's birth, "the mother has been very ill."  Things worsened for the young family when Louis took a day off work on Friday, January 10 to care for Rosalind.  He lost his job because of it.  "Since then he has made no money and was unable to get treatment for his wife," said the article.

On January 16, 1908 The Buffalo Courier reported that the baby's crying had wakened Louis and he realized Mary was not in the room.  "A light was burning in the bath room and after calling the door, he borrowed a hammer and smashed the lock."  The newspaper began its article saying "Filling a bathtub full of water, Mrs. Mary McClure, the young wife of Louis McClure of No. 456 West 25th Street, lay face downward in the fluid today and was drowned."

Louis's attempts at resuscitating Mary were unsuccessful.  The Courier said "despite the fact that he has no money, [he] persists in keeping the baby with him."

Joseph Schlott died in his home of a quarter of a century on October 6, 1915.  He was 87-years old.  As had been the case over the decades, his funeral was held in the parlor.

After the house was sold in November 1923 it appears to have become a rooming house.  William Steck lived here in the mid-1936's when he appeared on the Government's list of Communist Party voters.  And David Rodriguez was renting a room in 1944.  On the afternoon of October 10 that year he was in a bar and grill on Ninth Avenue when Henry Golombusky, removed his watch and chain from his vest.  Golombusky was apparently not an adept pickpocket, however, and he was indicted on October 22 on a charge of grand larceny in the second degree. 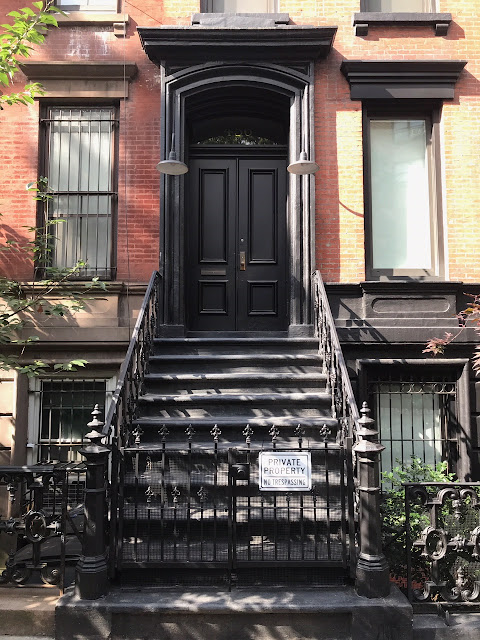 A renovation completed in 1966 resulted in two duplex apartments.  The property was sold in 2007 for $3.55 million, a price that might have stunned even the wealthy James W. Gillies.

photographs by the author
Posted by Tom Miller at 1:14 AM