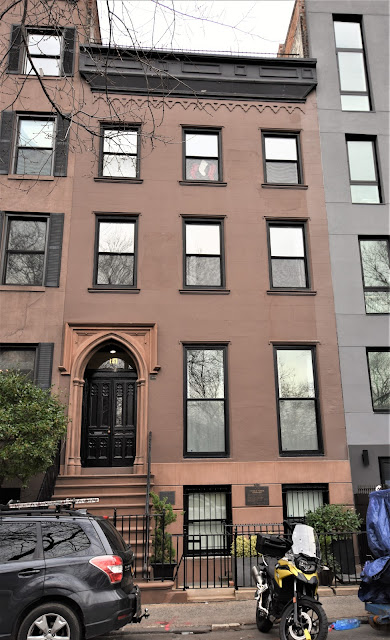 Around 1849 or 1850 the three-story and basement house at No. 151 Avenue B was completed.  What set it apart from the similar Italianate style homes in the neighborhood were its Gothic Revival details--the especially handsome entrance with clustered colonettes and a square-headed hood over the arched opening, and the delicate tracery that ran below the cornice.  (Interestingly, the interior details were purely Italianate.)  Three bays wide, its parlor windows were nearly floor-to-ceiling, suggesting that they were once graced by a cast iron balcony. 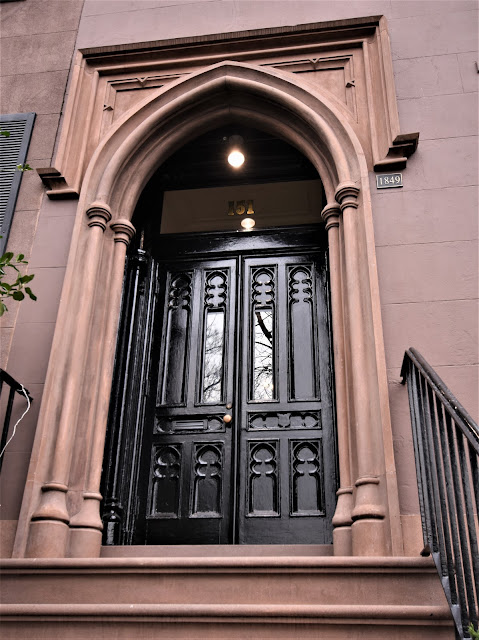 The house faced the newly-opened Tompkins Square, completed in 1850, which assured summer breezes, sunlight and pleasing views.  It was hinted at in an advertisement in the New York Herald on July 12, 1853 read:

Elegant House To Let:  Nearly New, and finished in the best style, with all the modern improvements, finely located by a grove of forest trees.

A succession of tenants followed, all of them "genteel families," as demanded in a subsequent ad.  In 1853 James T. Bertine, Jr. and his widowed mother, Lillis, moved in.   James Bertine, Sr., who had operated four stage coach lines and omnibuses, died on December 28, 1842.  He left his grown children and Lillis considerable real estate in New York and New Jersey.
In 1857 No. 151 became home to the Conger family.  John S. Conger's profession is not listed in directories, suggesting he may have been retired.  Abraham M. Conger was a clerk in the Post Office.  The family had one boarder, William F. Vanathringe.
When the "modern 3-story brown-stone house" was offered for sale in October 1858, the neighborhood was rapidly filling with German immigrants, not all of whom were impoverished.  No. 151 was purchased by the well-to-do Werner family.
Both Abraham and Edward Werner were brokers and they shared an office at No. 14 Rector Street.  Adolph Werner was a "tutor in History and Belles-Lettres" at the Free Academy of the City of New-York.   By 1863 he had been promoted to Professor the German Language and Literature.
The Werners remained in the house until 1864 when it became home to flour merchant Henry Mander and his wife Louise.  Following Henry's death in 1867, Louise took in a boarder, Christian Dick, who listed his occupation as "scavenger" at No. 1 Centre Street (the term most often referred to what today would be a street cleaner).
Louise Mander managed to keep the house by taking in one boarder at a time for several years.  By 1873, however, she was essentially running a boarding house.  Living with her that year were Francis T. and Sophia Lilliendahl (he was a cashier and she taught music), Louis Gros, who ran a biergarten at No. 60 Avenue B., and merchant Charles G. Sachs.
The Cohn family moved into the house around 1878.  Philip and Joseph Cohn were partners in the underwear company Philip & J. Cohn, Sigmund Cohn ran a clothing store on Canal Street, and Isaac was a inspector for the Department of Docks.
In 1880 Dr. David D. Toal and his wife, Annie, purchased the house.   Born in Ireland in 1838, Toal graduated from the New York University Medical College in 1867.  The house was conveniently close to the German-American Pharmacy at the corner of Avenue B and 12th Street which he had opened in 1868.  Toal divided his time between his office in the house and the drugstore.  In 1888 City of New-York, The Metropolis of To-Day said "Dr. Toal is a practising physician of wide-spread and enviable reputation and his residence and surgical rooms are located at No. 151 Avenue B., where he is in attendance at specified hours, and also gives free consultation at the pharmacy from one to two P.M. daily."
Annie E. Toal was not one to be underestimated, as a would-be thief discovered on June 19, 1882.  That day a "woman, whose black silk dress was heavily trimmed with lace, and whose black hat was adorned with a handsome ostrich feather," as described by The Sun, rang the bell.  With "a slight foreign accent" she asked the servant if a Mrs. Hill was in the house.  The Toals, too, took in a boarder who may have had a visitor, so the maid allowed the woman into the entrance hall while she checked.
The Sun reported "Mrs. Toal came into the hall to see what was wanted just as the woman was trying to open the door to leave the house.  She had Mrs. Toal's watch in her hand."  Annie had no intention of letting the crook get away.  "Mrs. Toal caught her wrist and took the watch away, and at the same time a set of diamond earrings fell to the floor."  Annie held the woman until police arrived.  The Sun remarked "The police have had complaints of a number of similar robberies from the neighborhood."
Dr. Toal was rather feisty, himself.  Two days each week he treated poor patients who were unable to pay for a physician.  On October 24, 1889 James A. McGinn sought his services, but he could not find the house.  Lost, he stopped in the drugstore of William Lang on East 10th Street to inquire.  Lang's shop was in direct competition with Toal's German-American Pharmacy.  The Brooklyn Daily Eagle reported "the druggist refused to give him the information and used insulting language about Dr. Toal."
When McGinn finally found the doctor, he mentioned what had happened.  After David Toal paid a visit to the William Lang's drugstore to confront him, Lang had him arrested for assault.  But Toal's testimony was far different.  The Brooklyn Daily reported "Dr. Toal went to the drug store for an explanation and he found the druggist with a milk pitcher in his hand.  He attempted to strike the physician with it, but the latter warded off the blow with his cane."  The judge found the evidence "clearly in favor of the doctor" and "honorably discharged him, to the discomfiture of the druggist."
On December 17, 1897 Toal confronted a burglar in the house.  In reporting that Frank Miller was sentenced to ten years in State Prison on December 26 The Press added, "When the doctor discovered the intruder Miller struck him on the head with a sandbag."
On February 26, 1904 David D. Toal died.  The Sun noted "He lived at 151 Avenue B and was known to nearly every man, woman and child in the region."
Two years later the house was acquired by the Bryson Day Nursery as an addition to its operation next door at No. 149.  In 1909 the group initiated $18,500 in renovations, more than half a million in today's dollars.  Wealthy socialites who supported the Bryson Day Nursery included the wives of William G. Rockefeller, Robert Bacon and George S. Brewster. 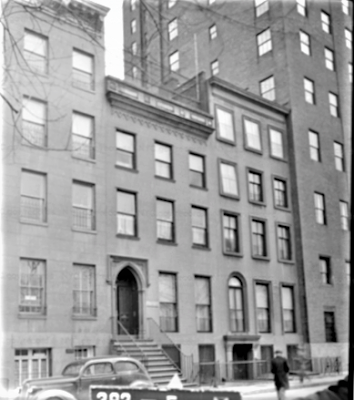 The Bryson Day Nursery operated from both buildings.  photo via the NYC Dept of Records & Information Services.
The National Association of Day Nurseries retained possession of the side-by-side houses until 1944, when The New York Sun reported on April 26 that Samuel Kilpatrick has purchased them.   The following February Joseph Raskob bought No. 151 and converted it to one apartment per floor.
The house became home to several artistic tenants, the most celebrated of whom was Charlie "Bird" Parker and his wife (although they never actually married), Chan Richardson.   By the time the Parkers moved into their basement apartment late in 1950 the jazz saxophonist was already famous.  In her 1993 autobiography, My Life in E-Flat, Richardson remembered:

Our apartment was in the Ukrainian section of the Lower East Side...It was an area full of poverty, peopled by Hasidic Jews with side locks and gypsies, and was a melting pot for refugees.  Our building was across from Thompkins [sic] Square Park and each of the...families living in it occupied an entire floor.  We occupied the ground floor, which had a separate entrance and opened onto a large courtyard in back for the children and all the animals we would eventually accumulate.

Richardson said she decorated the apartment with "blond wood furniture, put up Steinberg birdcage wallpaper from Sloans and painted the living room charcoal grey."  The year after they moved in the Parkers welcomed a daughter, Pree, and in 1952 son Baird was born.
Parker's use of alcohol and drugs resulted in his being banned from New York State nightclubs in 1951.  He was forced to take to the road to support his family, and during those lengthy absences his alcohol abuse worsened.  That only exacerbated his depression.  Then, in March 1954 little Pree died of congenital heart failure.  Devastated, Parker attempted suicide twice.  The family moved to New Hope, Pennsylvania in October 1954.  He died nearly penniless there on March 12, 1955.
In the meantime, other notable tenants were Abstract Expressionist painter Franz Klein, who lived in the third floor apartment in 1955; and sculptor Peter Agostini who was here from 1962 to 1966.  Agostini's works are exhibited in esteemed venues like the Museum of Modern Art, the Metropolitan Museum of Art and the Hirshorn Museum. 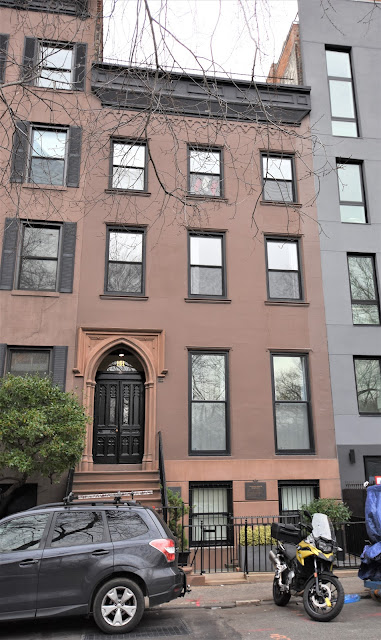 In 1979 Judy Rhodes purchased the property for $90,000 (about $317,000 today) and moved into the ground floor apartment where the Parkers had lived.   Chan Richardson's birdcage wallpaper was still there.
Rhodes had a jazz connection as a producer of concerts and booking agent for musicians at jazz festivals and clubs like the Village Vanguard and Sweet Basil's.  For a while she allowed artists like Art Blaky, Don Cherry and Dewey Redman to use her front room for rehearsing. 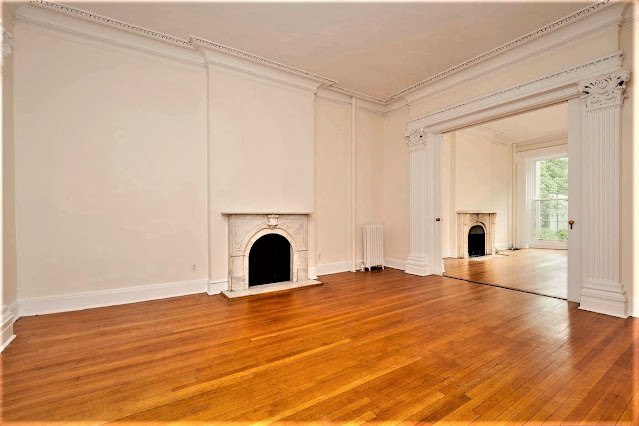 Two marble Italianate mantels, intricate plaster detailing and striking fluted pilasters survive on the parlor level.  photo via www.6sqft.com
The house was placed on the market in October 2015 for $9.25 million.  Rather amazingly, much of the 1849 interior detailing is beautifully intact.
photographs by the author
Posted by Tom Miller at 1:10 AM