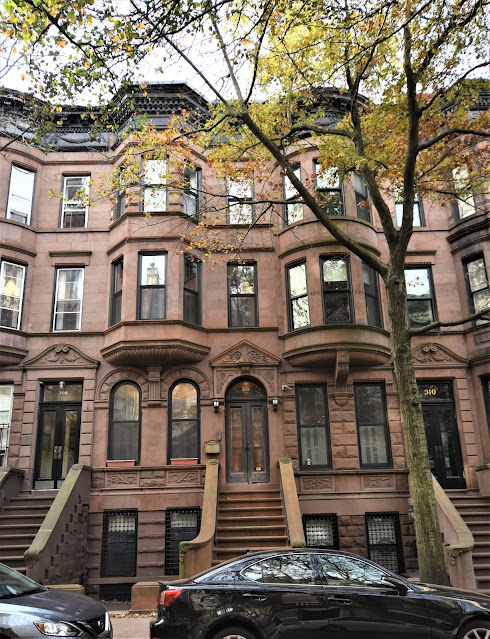 Developers Walker & Lawson hired architect Martin V. B. Ferdon in 1893 to design a row of five houses on the south side of West 91st Street between West End Avenue and Riverside Drive.  Ferndon created scores of Upper West Side homes, the majority of them in the Renaissance Revival style.  These would follow suit.
Completed within the year, the brownstone fronted residences were each 17-feet wide (except for the westernmost, No. 312, which was a foot wider) and rose three stories above the English basement.  Ferdon arranged them in an asymmetrical A-B-C-B-D pattern.   The centered, "C type" house at No. 308 featured an arched doorway within a squared surround that supported a triangular pediment.  The architect borrowed from Romanesque Revival in setting the arched parlor openings upon rough-cut stone (inset with Renaissance Revival panels) and by capping them with the same material.  A three-sided bay at the second and third floors morphed into an elaborately dentiled cornice.
The house was sold to Rufus Darrow, the head of Rufus Darrow's Sons building materials firm.  Born around 1830, Darrow had married Emeline Jackson Blonk in 1866.  The couple would have five children, Jennie, Rufus Jr., Donald, Daniel, and Samuel.
Donald and Rufus, Jr. did not initially enter their father's business.  Donald was first listed as a clerk, and in 1895 Rufus was appointed a dock master with the Department of Docks with a starting salary of $1,500--just over $47,000 per year today.  He landed the job when the city fired a group of dock masters in a single day and hired their replacements just as quickly.
Five years later the city did a second purge, firing five dock masters on a single afternoon.  Among them was Rufus Darrow, Jr.  When he now joined Rufus Darrow's Sons all the brothers were engaged in the business.
Rufus Darrow's cousin, Adaline, was the widow of the wealthy attorney Henry P. Townsend.  It appears that Rufus, Jr. assumed he was in line for a slice of the estate.  But when Adaline died in February 1903 she left nearly her entire fortune (about $15 million in today's money) to her husband's business partner, Joseph H. Mahan.  Rufus, Jr. sued to overturn the will.  The "sensational charges," as described by The Evening World, made by Louis f. Dodds ("a beardless young attorney"), included "hints of spirits, spiritism, the intervention of mediums and the help of invisible spirits in drawing the will."  The case dragged on until January 1904 when the judge dismissed the charges saying the "investigation of spiritualism has never been declared a good cause for setting aside a will."
Rufus Darrow died in the house on April 17, 1906 at the age of 77.  His funeral was held in the parlor two days at 8:30 p.m.
The 1907 New York Blue Book of society showed Jennie, Rufus Jr., and Samuel and his wife living with their mother in the 91st Street house.  The success of Rufus Darrow's Sons provided the siblings with comfortable incomes--enough so that Rufus, Jr. could afford an expensive motorcar.
Around 11:00 on the night of April 23, 1908 Rufus was driving 22 year old Rose Trilling in his car through Brooklyn when it collided with an eastbound trolley car.  It was a significant crash, throwing Rose from vehicle to the pavement.  An ambulance surgeon (the term for today's EMT) was able to treat her injuries on site.  A police officer found neither Darrow nor the motorman responsible and no arrests were made.  Darrow's shiny car, however, suffered nearly $3,000 in damages by today's standards.
On May 18, 1910 Emeline J. Darrow sold No. 308 to Angus and Jeanette Hopkins for $29,500--about $819,000 today.  Hopkins was a partner with James Hopkins in the wire manufacturing firm of Hopkins & Co. on West Broadway.  The company manufactured a wide variety of commercial metalwork, like grills for bank tellers, skylight guards, and even decorative railings for stoops and balconies.

Hopkins was born on Broome Street on July 15, 1871.  He and Jeanette had two daughters, Elinore and Helen, and a son, Angus, Jr.  The family maintained a country house in Middle Island, New York.  Hopkins's financial and social status was reflected in his several club memberships--the Spring Lake Golf and Country Club, the St. Andrews Society, and the Knickerbocker Whist Club among them.
Just two years after purchasing the house, Hopkins leased it to William Henry McGee.  He and his wife, the former Atilda Irvine, had a daughter Helen.  Born in Brooklyn in 1863, McGee was an independent insurance agent, representing several firms.  Two years after moving into the 91st Street house, in 1914, he formed Wm. H. McGee & Co., a partnership with E. J. Coleman and R. B. Jennings.
The family automobile, a Cadillac, was listed in Atilda's name in 1914.  Helen was active in younger society, a member of the Theatre Club, a women's group.  Living with the family that year was Ruth Hoffery, apparently a close friend of Helen's who, too, was a member of the Theatre Club.
The McGee family continued to rent the house until September 1924 when Jeanette Hopkins sold it to Dr. Samuel Nelson Irwin.  A general practitioner, Irwin had practiced medicine since around 1892.  He and his wife, the former Myrna Harper, had two children, Margarette and Horatio.  The family's summer residences was at Arverne-by-the-Sea.
Early in April 1932 Dr. Irwin showed signs of heart trouble.  He died in the 91st Street house six weeks later on May 7.  His long-time friend Rev. John C. Green said of him "A more delightful and entertaining host one could not meet.  He radiated good cheer.  his was a winsome personality."  Irwin left an estate valued at $1.47 million in today's dollars.
No. 308 remained a single family house until 1950 when it was converted to apartments.  A subsequent renovation completed in 1973 resulted in just one apartment per floor.  That configuration lasted until 1998 when the house was returned to a single family home with an apartment in the basement level.
photographs by the author
Posted by Tom Miller at 1:30 AM