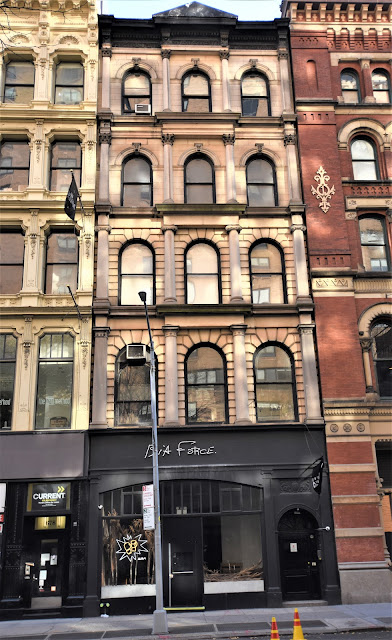 Beginning in the early 1830's the block of Broadway between Bond Street and East 3rd Street was lined with the homes of some of Manhattan's wealthiest citizens.  By the early 1850's attorney DeLancey Kane and his family lived at No. 676 Broadway.  Kane's wife, Louisa Dorothea Langdon,  was the granddaughter of John Jacob Astor I.
It is unclear when the family left the Broadway house, but in the years preceding the Civil War the neighborhood was increasingly becoming commercial, forcing homeowners like the Kanes to move northward.  Kane did not sell the property, but leased it until 1873 when he finally gave in to the inevitable.  He demolished the vintage house and hired architect Detlief Lienau to design a modern loft and store building on its site.  (Lienau had earlier designed the Kane mansion, Beech Cliffe, in Newport with architect Leon Marcotte.)
Born in Germany, Lienau is credited with having introduced French styles to American architecture.  He was among the founders of the American Institute of Architects and by now was well recognized for his creative designs.
The incursion of commerce along this stretch of Broadway did not mean it had declined.  Directly across the street was the magnificent marble Broadway Central Hotel.  In keeping with the upscale tone of the neighborhood, Lienau designed a dignified Renaissance Revival structure clad in gleaming white marble.  Above the cast iron storefront each floor was defined by a molded intermediate cornice and each featured engaged columns which flanked the central windows which upheld slightly projecting entablatures.  Completed in 1874, the structure cost Kane $70,000 to erect--around $1.62 million in today's money.
Among the initial tenants were the showrooms of Simpson, Hall, Miller & Co., manufacturers and sellers of silver plated wares, and Hitchcock, Newell & Co.'s gentlemen's furnishing work and salesrooms.
Simpson, Hall, Miller & Co. was founded in 1866 and manufactured its cutlery and hollowware (like tea and coffee sets) in Wallingford, Connecticut.  As Christmas approached in 1874 the firm announced it "recently received from their factories a large variety of New and Elegant Electro Silver-Plated Articles, specially designed for Holiday Gifts."
That Hitchcock, Newell & Co. dressed its patrons from head to toe was evidenced in two help-wanted ads in the spring of 1875.  It need "first class operators on the Wheeler & Wilson [sewing] machine, to make jean and linen drawers" and "experienced hands, so make men's neck-ties and scarfs."
Simpson, Hall, Miller & Co. was replaced by the jewelry store of Taylor & Brother around 1877.   An advertisement in The Evening Post on December 15 that year touted "Our stock of fine Diamonds, Rubies, Sapphire, Emeralds and Pearls is unusually complete this season, including some choice specimens of old Brazilian Stones, in pairs and single."  It also offered a selection of Swiss watches by Farre & Andre, Roman & Cie., Brietling Laederich, Louis Galant, "and other well-known makers."
In November 1878 a customer walked in and "expressed a desire to see some gold chains of a particular pattern," as reported by the New York Herald.  The clerk explained that he had none of that pattern, "but he would go for some."  He asked the customer to take a seat and he would be right back.
As the clerk, Charles L. Heiser, was returning he met the customer on the staircase coming down, who told him he had remembered an engagement and "would return directly."  When Heiser reached the store, he discovered that a package that he been wrapped up for delivery was gone.  It contained 15 diamond studs and 12 razors, worth more than $20,000 today.  Heiser provided police a detailed description.  The New York Herald said, "James Roberts, alias Curtin, alias Cunningham, a well known operator was identified as the party wanted."
Roberts caught a train to Chicago and might have gotten away with the heist had he not been caught in another theft there.  He was extradited to New York where he faced Justice Morgan and Charles L. Heiser. 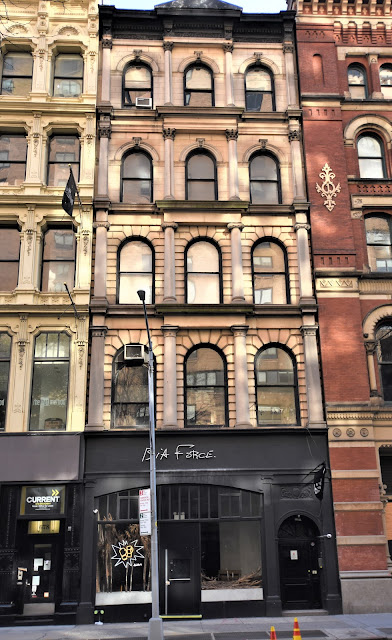 The 1890's saw Falk Bros. & Co., makers and importers of underwear, hosiery, handkerchiefs and other apparel; Murzesheimer Brothers; and the Metropolitan Rubber Company as tenants.  The latter firm, which moved in on January 1, 1891, manufactured waterproof clothing items like ladies' "storm coats" and "long cape garments," and men's raincoats (with or without capes).
In 1899 the Kane estate hired the architectural firm of Jordan & Giller to do "general alterations."  The interior updating was apparently significant, costing the equivalent of $254,000 today.
By the first years of the 20th century fashion had moved further north and this stretch of Broadway became a center of apparel and millinery manufacturers.  The tenants of No. 676 included Ury & Mendelson Bros., women's milliners; men's shirt makers Marus Breier's Sons and Meyer Natelson, Inc.; Hy-Mark Neckwear Co., and, in the ground floor store, Broadway Bargain House, "wholesale clothing, furnishings and dry goods." 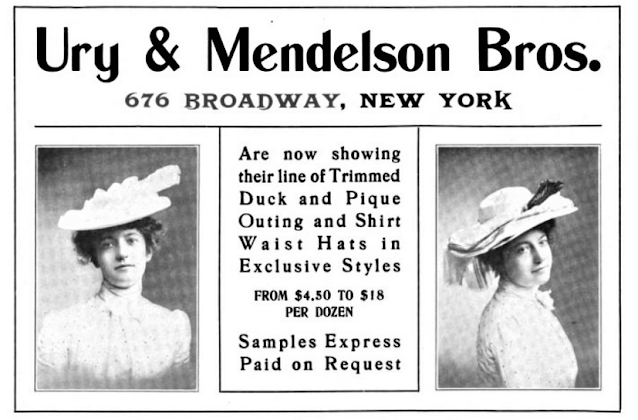 The Illustrated Milliner, June 1902 (copyright expired)
Marcus Brier's Marcbrei Realty Company owned the building in 1921 when he hired architect Ralph Segal to replace the storefront.  It appears, however, that the portions of the original 1874 front--most notably the arched entrance to the upper floors with its elegant fanlight--were preserved.
The Great Depression dealt Brier a hard blow and on May 29, 1938 The New York Times reported that the State Mortgage Commission and the Title Guarantee and Trust Company had brought suit against the firm.  No. 676 Broadway and two other properties were sold at foreclosure auction that week.
The last quarter of the 20th century once again brought change to the neighborhood.  Now a haunt of New York University students, the lofts and stores saw trendy shops and stores move in.  The fifth floor loft of No. 676 was leased to artist Keith Haring in 1985.  From here he created his most recognizable artworks until his death from AIDS in 1990. Haring's  1989 poster Ignorance = Fear was created in his fifth floor loft.
The marble building where women once shopped for silverware and jewelry was home to The Fitness Depot by 1987, and Lighting Plus in 1995.  It was purchased in 2000 by the development company The Witkoff Group, head by Steven Witkoff, along with 10 other historic buildings.  The firm announced its intentions of renovating the structures.  Today Detlef Lienau's refined structure is wonderfully intact.
photographs by the author
Posted by Tom Miller at 1:18 AM