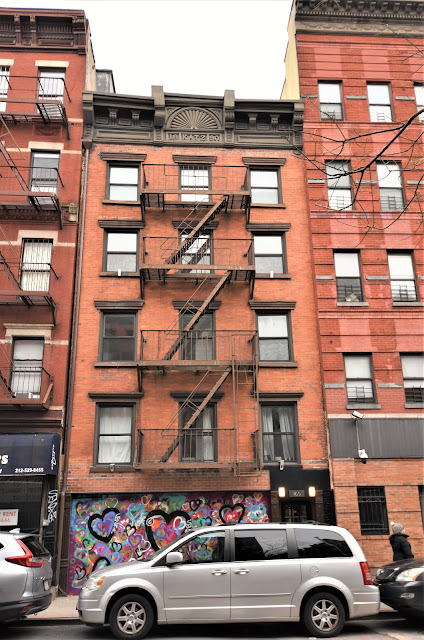 J. G. Thomas lived in the house at No. 165 Avenue B in 1852.  But the neighborhood was begun changing.  In the 1840's German immigrants began pouring into Manhattan, settling mostly on the Lower East Side.  Within the next decade 800,000 Germans entered New York Harbor and by 1855 only Vienna and Berlin had a larger German population than did New York City.  The following year Thomas's house was gone, replaced by a five-story tenement building.

Not only the residents of the 23-foot wide building, but its owners were German.  Christian and Dorothea Hieber owned it until 1872, when they sold to Frederick Graf.  The shop on the ground floor was Albert Kessler's hardware store at the time.
Upstairs the tenants included Knobloch family.  George M. Knobloch was a tailor and his son, Jacob, worked as a clerk.  The other tenants were another tailor, Martin Bollmann; "trimming maker" Herman Fuss; Jacob Meupfarth, a carpenter; Herman Neisner who worked in a dyeing works; and two widows, Francesca Maier and Elisa Stahl.  Elisa took in sewing to scratch out a living.
In the late 1870's three Irish immigrants lived among the otherwise German tenants.  Andrew Gallagher and Andrew Daley were both machinists, and Patrick Ryan was a bartender in Edward Hare's saloon at No. 104 Avenue C.   By the very nature of their jobs bartenders overheard conversations and that resulted in Patrick Ryan being involved in a bank robbery case in 1879.
Eight months earlier, on October 27, 1878, the Manhattan Savings Bank had been robbed in what was discovered to be an inside job.  The bank watchman, Patrick Shevelin, and policeman John Nugent were arrested, while Patrick Ryan and a bank teller, Joseph Bird, were locked in cells as witnesses.
It was Ryan who had identified Nugent to investigators during a clandestine walk-through of police headquarters.  Then, on June 14, 1879 he testified, recounting the conversations Nugent and Shevelin had had in the saloon over a matter of weeks.
By now the hardware store had been converted to an oyster saloon, run by George Hamber.  Oysters were a major part of 19th century New Yorkers' diets.  Oyster peddlers sold the shellfish from push carts and oyster restaurants and saloons were popular throughout the city.  (At least one, the famous Oyster Bar in Grand Central Terminal, survives.)  It was still in the space at No. 165 Avenue B as late as 1886 when it was being run by Henry Kiefer.
In 1890 Abraham Katz purchased the aging building for $15,500--around $450,000 in today's money.  He hired the German-born architect William Graul to make massive renovations, including a new façade and "interior alterations."  Now faced in warm orange brick, the openings were capped by pressed metal cornices.  A handsome bracketed metal cornice included a Queen Anne sunburst below which was Katz's name and the date of the work.

The building continued to house tenants with German and Irish surnames.  But their financial and professional standings had improved--possibly reflecting higher rents in the updated building.  An example was William H. Lorch whose family moved in when the alterations were completed.
Active in politics, he was a candidate for the New York Assembly in 1890, running for the Prohibition Party.  He won and would retain his seat for decades.   On March 18, 1892 he ran an advertisement in the Sullivan County Record announcing "Farm For Sale."  Formerly the property of Adam Lorch, the Youngsville, New York farm engulfed 43 acres and had "good buildings and good orchard."
The tenants at the turn of the century included auctioneer Louis Sachs, and Amelia Hansen and her teen-aged daughter, Valdburga.  In 1903 Valdburga was 18 years old and worked in a shop on Broadway--until she was wooed away.
According to the New York Herald, in September Amelia told authorities that Valdburga "left her home some weeks ago after meeting a wholesale merchant, who is credited by Mrs. Hansen with being a millionaire, but whose name she does now know."
The article explained that, according to Amelia, the man "took the girl to Long Island.  He afterward called on the mother and said he was interested in the girl and wished to take her to Europe to improve her education."   When Amelia refused, he promised he would take along an older woman as an escort.  She still objected.
Six weeks after Valburga left the apartment her mother flew into a panic.  She read in the newspapers that information had been leaked to the police than an "heiress" was going to be kidnapped and taken to Europe because her family disapproved of her suitor.  Amelia thought that perhaps the facts had gotten twisted and the girl was actually her daughter.  She rushed to the Hoboken police with her story in an frenzied attempt to find Valburga.
On September 13, 1903 the New-York Daily Tribune reported that she told Chief Hayes "that a policeman had told her that her daughter, Valdburga, was about to be kidnapped and taken to Europe on board the Pretoria."  The case fizzled out, the New York Herald saying "No fair heiress was kidnapped in Hoboken yesterday to prevent her marriage to a man of low degree, but the city had a thrill of genuine excitement over a chase for the elusive heiress and the resulting rumors."
Apparently disillusioned, Amelia seems to have given up.  "At the headquarters in Mulberry street in this city," said the New York Herald, "it was said that Mrs. Hansen had not called."
Joseph Jacoby was 22 years old in 1914 and worked as a salesman.  On Tuesday, September 22 he left the family's apartment for an afternoon on Flushing Bay where he hired a rowboat at Simpson's boathouse.  A while later witnesses saw him out in the bay, "stepping into the trunks of a bathing suit," according to the Daily Star.  They later said they saw him jump into the water.
That he would do so was puzzling, since he had earlier told a boathouse attendant that he could not swim.  The Daily Star reported "He was seen struggling in the water, holding on to the side of his rowboat.  Before would-be rescuers could reach him, he was drowned."
The currents of the bay swept the body under.  Two days the Daily Star reported "The police have so far been unable to recover the body."  It was not found until Friday when a yacht saw it floating atop the water.
The police had a theory as to why Jacoby had apparently killed himself.  "A red-covered book on Socialism was found in the empty rowboat the police later picked up.  Jacoby is thought to have been a deep student of the theories of Marx and his deep reading may have unbalanced his mind," explained the Daily Star.
The post-World War I years saw more Italian immigrants in the neighborhood than German.  In 1920 Pietro Fardellone, who worked for the Department of Docks, purchased No. 165 and moved his family into one of the apartments.
Most likely unknown to him, two of his residents, Jacob Ackerman and his wife, were running a business from their apartment--one that displeased Federal authorities.  On April 23, 1925, working on a tip that bootleg alcohol could be purchased there, four undercover Prohibition agents showed up at the Ackerman apartment and bought liquor.  Inside they found the still that produced the illegal alcohol.  Not surprisingly the Ackermans were arrested.
During the Great Depression years the store was home to Burger Brothers, a hardware and housewares store where housewives could buy items like the Wear-Ever stew pan.
In the last quarter of the 20th century the space held Bossanova, listed in The New York Times's "A Guide to the Area's Hot Spots" as an "interesting home furnishing shop." 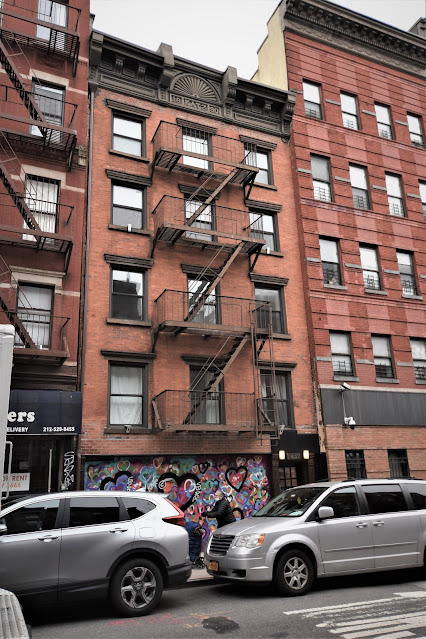 The storefront was remodeled in 2009 and the upper floors renovated in 2013 to three-bedroom apartments.  It was purchased by Aksum Investors L.L.C. in 2017 for $7.2 million.  Other than the modern storefront, it is little changed since Abraham Katz remodeled it in 1890, adding his name for passersby today to wonder about.
photographs by the author
many thanks to reader Matt Kay for prompting this post