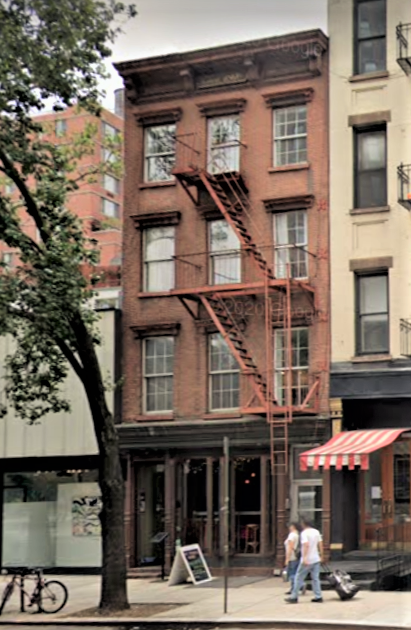 In 1859 Henry Ferris opened his Excelsior Brewery at 223 and 225 Tenth Avenue, just north of 23rd Street.  It was conveniently near his home on West 24th Street.  He would produce "ale, porter &c." from the location until 1869 when he moved slightly north on the avenue.

Half of the former brewery site, No. 225, was sold to John Jackson who erected a four-story flat and store building.  The Italianate style structure was faced in red brick with cast iron lintels and bracketed cornice.
Jackson and his wife, Rachel, moved into one of the apartments.  Their initial tenants were two single women.  Margaret Henry was the widow of Laurence Henry, and Louisa Seaman was the widow of Percival C. Seaman.  Louisa taught at Grammar School No. 56 on West 18th Street between Eighth and Ninth Avenues.
On April 19, 1873 John Jackson died "suddenly" at the age of 60.  His funeral was held in the apartment three days later.  Rachel remained, managing the building.
Her small list of tenants held respectable jobs.  In 1876 the Lyons family rented rooms.  Joseph E. was a stenographer on Wall Street and Dennis was a clerk--a catch-all term for officer worker that covered a variety of jobs.  Francis White was also listed as a clerk, and William Delly was a watchman, essentially the private security guard of today.
Rachel Jackson retained possession of the building until September 27, 1887 when she sold it to Gustav Von Glahn for $14,000--the equivalent of $388,000 today.  She remained in her apartment, however, possibly rent-free as part of the deal.
Born in Germany, Gustav and his brother, John, had arrived in America around 1873.  They founded Von Glahn Bros, wholesale grocers on Washington Street and a bitters factory at No. 96 Water Street.  Gustav's sons, Diedrich H. and Henry W. opened their "consumer" business in the 10th Avenue store.  No doubt among the commodities available here was Caroni Bitters.
In 1893 A Souvenir of New York's Liquor Interests said, "It is a matter of common information in the trade that there is not a finer quality of bitters in use in America for making mixed drinks and other purposes than those known as the Caroni Bitters, for which the sold proprietors in this country are Messrs. Von Glahn Bros.
Gustav Von Glahn's fatherly love did not surpass his no-nonsense Teutonic business sense.  His sons rented No. 225 Tenth Avenue from him, signing official leases.  When they renewed the lease in February 1897 for five years, it granted them "privilege 7 years renewal."  The brothers agreed to rent equal to about $20,000 per year in today's money.
In 1898 Rachel Jackson was still living in her apartment of nearly 30 years.  Another widow, Eliza Donnell, lived here at the time and by 1900 Patrick J. Casey, who was treasurer of the nearby Guardian Angels Church was renting rooms. 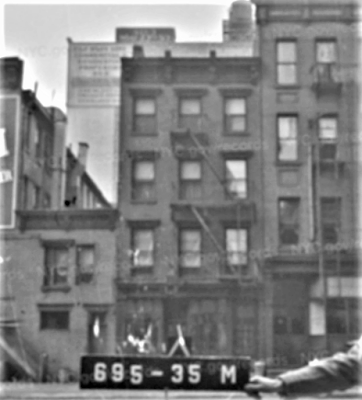 The building as it appeared around 1941.  via NYC Dept of Records & Information Services.
The Von Glahn brothers' store was gone by 1905, replaced by John McCormick's undertaking business.  It was involved in a peculiar mystery that winter.
On December 20, 1905 an impoverished man, James Hayes, was admitted to the City Hospital on Blackell's Island suffering from tuberculosis.  He died early in February 1906 and his son, 19-year old Edward Hayes, identified his father and authorized an autopsy.  The Brooklyn Daily Eagle reported, "Then Edward is alleged to have visited John McCormick, an undertaker at 225 Tenth avenue, and ordered him to get the body and prepare it for interment."
McCormick retrieved the body, prepared it and dressed it in a new suit for his funeral.  The newspaper said he "placed it in a coffin and called the relatives to view it."  The New York Times reported on February 11, "Young Hayes, accompanied by his grandfather, the moment they saw the body, declared that it was not that of their relative."
McCormick seems to have done too good a job.  The Brooklyn Daily Eagle explained, "The undertaker had made a great improvement of the appearance of the body with the aid of shaving tools and soap and water."  The article went on, "The astounded undertaker insisted that they were wrong, but the youth and the old man were positive that the dead man was not James Hayes."
There was nothing else for McCormick to do but notify the morgue.  The hospital officials confirmed that there had been only one body, so no mistake could have been made.  Nevertheless, "The body, all ready for interment, was taken back to the morgue late last night," reported The Brooklyn Daily Eagle.
Among the tenants in the building at the time was the Casey family and John McKierman, a driver.  In 1909 McKierman changed careers when he got a civil service job as a river pilot for the city.
A baby boy, John J., was born in the Casey apartment around 1900.  He went on to graduate from Cathedral College in 1921, completed his religious training in Rome, and was ordained a priest on March 12, 1927.  In 1932 he was appointed the private secretary to Cardinal Patrick Joseph Hayes.
The mid-century the commercial space was home to the German bakery, Wuest Bakeries, Inc. 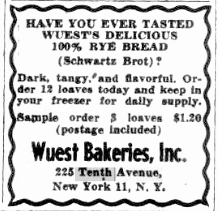 The neighborhood changed as the century drew to a close.  By 1996 the Sarah Morthland Gallery was here and today a tavern, The Drunken Horse, operates from the space once home to John McCormick's undertaking business. 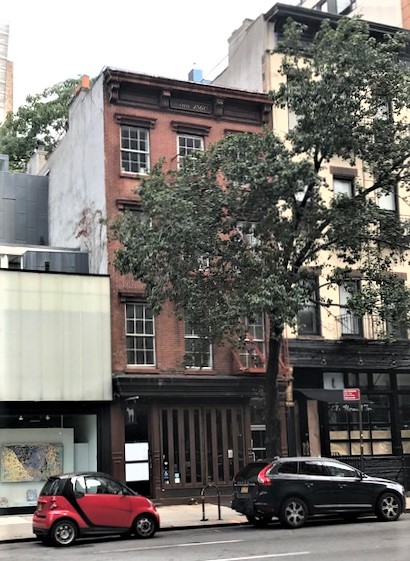 photograph by the author
Otherwise, little has outwardly changed to John Jackson's 1869 building.
Posted by Tom Miller at 1:15 AM