When Elizabeth Birdsall married Richard Jackson Althause, her father owned a successful "blacksmith" business.  It would become the life's work of their eldest child, Samuel Birdsall Althause, who was born in 1804.

Samuel first apprenticed under his grandfather; then when Benjamin Birdsall retired in 1828, he partnered with George Cornell to take over the business, calling it Cornell, Althause & Co. Now more than merely making horseshoes and door hinges, the firm was an early Manhattan foundry.

Renamed S. B. Althause & Co. following the partners' breakup in 1841, the foundry was located at Nos. 20-22 Mercer Street.  Directly across the street at No. 19 was the Althause home.  Samuel married Helen Welling Sealy, and on December 17, 1855 their first child, Charles M. Althause was born in the house.

Tragedy struck the following year.  On Wednesday, March 19, 1856 the one-year old boy died.  At 2:00 two days later friends and relatives filed into the Mercer Street house for the heart-rending funeral of the infant.

The success and scope of S. B. Althause & Co. was reflected in the contract to provide the ironwork for the massive new Lord & Taylor department store at Broadway and Grand Street in 1859.  It was about this time that Samuel Althause, having already amassed a personal fortune, moved his family to Brooklyn.

In 1860 Althause demolished the Mercer Street house and began construction on an up-to-date commercial building.  While the name of the architect has been lost, his design was unexpectedly sophisticated.  Its five stories were divided into three sections.

Free-standing fluted columns flanked the centered double doors of the cast iron base.  Their elaborate capitals were echoed in the pilasters to the sides.

The upper floors, faced in stone, featured rusticated piers which rose between two-story arches.  Paneled spandrel panels separated each of the double-height arches.  Faceted keystones flanked a gently scrolled keystone at the lower level; while above the keystones were elaborately carved and foliated.  A bracketed iron cornice completed the design. 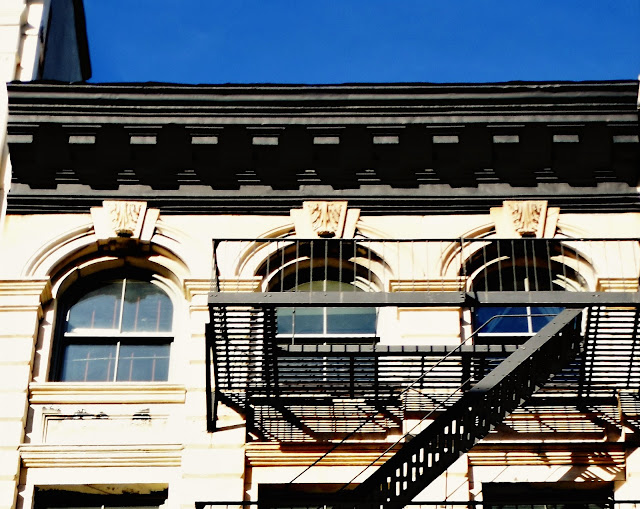 The building was completed in 1861 and among its first tenants was Griswold & Sheldon.  Partners William C. Griswold and Julius Sheldon operated a substantial hat-making and wholesale business here, and Sheldon held a patent on his "hat-blocking machine."  Despite what appeared to be an extensive business, the firm declared bankruptcy in 1867.

M. & P. E. Goldberg operated from the building in 1871.  The firm's bookkeeper, J. D. Smith, was caught pilfering "small sums of money" that summer.  On August 4 he was committed for trial.

In the meantime, the store of Rawson & Co. was at street level.  It closed in April 1872, advertising its furniture and accessories in The New York Herald.  "Store fixtures--counters, tables, desks, show cases, chairs, chandeliers, mirrors, globes, travelling trunks, stove and pipe; at nominal prices this week."

By 1874 John T. Camp & Co., "ladies' dress trimmings" had its factory and salesroom in No. 19 Mercer Street.  John T. Camp was a successful businessman, who also owned the "popular Hotel known as the Mountain House," in South Orange, New Jersey, as described in The New York Herald that same year.

But he was best known for his military service during the Civil War.  He had enlisted in the 22nd Regiment on November 11, 1861, just seven months after the firing on Fort Sumter.  By the time of his discharge in February 1871, he had risen to the rank of Lt. Colonel.  Breveted a colonel, he retained command of the 22nd Regiment until his retirement on April 13, 1896.

Meanwhile, other apparel-related firms came and went.  In 1883 brothers Herman and Aaron Levy went into business manufacturing boys' clothing.  The young men opened with a substantial working capital, added to when Aaron married "a Miss Jacobs [and] received $15,000 as a wedding gift from his father-in-law," according to The Clothier and Furnisher.

The firm suffered damaged to its stock when a fire broke out on July 26, 1888; but the partners received $6,000 in insurance money to cover it.  And so it was perhaps puzzling to their uncle, Charles Schanz, when the brothers asked for a $4,016 loan not long afterward.

The problem was horse racing.  The Levi brothers purchased a stable of 12 horses and invested in a race track in New Jersey.  And they gambled in a 28th Street "pool room," (the term for an illegal horse gambling operation) to try to bolster their funds.  Instead, they simply got deeper into debt.


Finally, on March 6, 1890 H. L. Levy & Brothers declared bankruptcy.  The Sun reported the following day, "Both the partners...are young men, and their failure is attributed to horse racing, in which they are currently reported to have lost $22,000."  The article mentioned the stables and the race track, saying "they made a failure of it."

The embarrassing reason for the once-respected firm's collapse was publicized nationwide.  The Clother and Furnisher reported "Their failure is attributed to the fact that they tried to run horses and were heavy losers, besides losing very heavily in an uptown poolroom."

Equally mortifying was the press attention received three years later by Etienne Hunter, a 42-year old traveling salesman for W. A. Reilly & Co.  Hunter had married Annie Morris on July 22, 1880 and they lived happily together for years.  Then, on their anniversary in 1892, he walked out.

On March 16, 1893 "he returned home and was forgiven," according to The Times.   Three weeks later he told Annie he was going on a business trip.  "She suspected, however, that there was a woman in the case, and began to investigate," said the newspaper a few months later.

Annie's suspicions were based on Etienne's frequent mention of Mrs. Edith Browning, who had written several books on "free love and kindred subjects;" one of which was titled Experimental Marriage.  Annie had found several of Browning's books which the author had sent to Etienne with passages underlined by her.

And in 1891 Hunter had mailed a letter to Mrs. Browning; but it was accidentally returned to his wife who opened it.  The last straw was when Annie purchased furniture on 14th Street.  The clerk asked her if she wanted it delivered to "the same place as the last."   "She then learned that her husband had purchased a quantity of furniture and had it delivered to Mrs. Elizabeth Hunter at 134 East Twenty-eighth Street."

Now Annie did her own private investigation work.  She staked out the 28th Street address, a boarding house operated by a Mrs. Burke, as well as No. 19 Mercer Street.  "She went to her husband's place of business and followed him one day for seven hours all over the city, until he finally reached the house...where he went in."

At 6:00 on the morning of Thursday, July 6, 1893 Annie was lying in wait outside Mrs. Burke's boarding house when her husband emerged.  She took him directly to the law office of her brother, Harry Morris.  "When he arrived there he found a detective, who arrested him and took him to Yorkville Jail, where he was locked up."

The New York Times ran the headline "MUST PAY OR STAY IN JAIL" and reported that Etienne agreed to pay Annie and their two children $60 a month.  But he did not have the cash.  "If Hunter does not secure a bondsman to qualify for him this morning, he will be sent to Blackwell's Island for a term of several months."

The first decades of the 20th century saw a decline in the Mercer Street neighborhood.  In the 1930s No. 19 was home to The Waterbury Chemical Company, which used the entire building "for baling of cotton waste."

In 1975 the Soho Repertory Theatre, also known as Soho Rep, was founded by Jerry Engelbach and Marlene Swartz.  It moved into No. 19 Mercer Street and by 1979 had the largest subscription audience of any Off Off Broadway theater.    Its success was such that in 1985 it was forced to move to a larger venue. 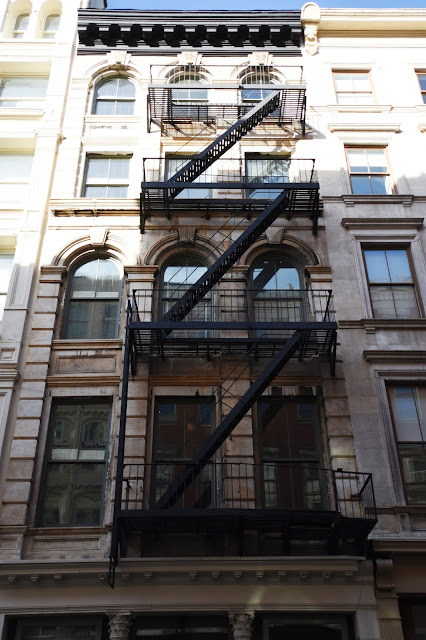 A conversion in 2000 resulted in a recording studio and lounge on the ground floor, and joint working-living space above.  Rather amazingly, however, the ground floor storefront was never abused, other than the loss of the Corinthian capitals of the pilasters.  And other than a distracting iron fire escape, the especially impressive 1861 structure survives wonderfully unchanged.