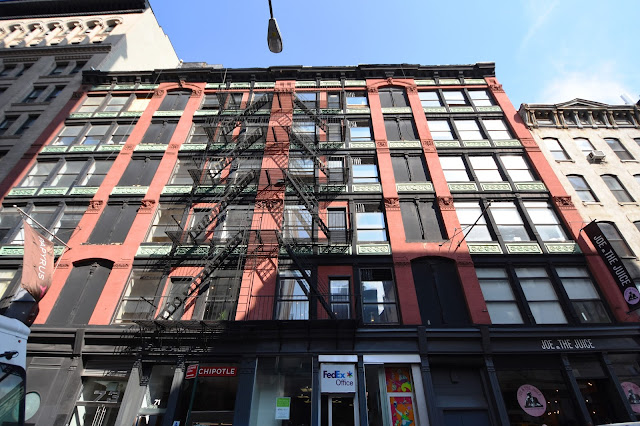 Philip Goerlitz acted both as real estate developer and builder for his many projects in the 1880s and '90s.   Many were tenements in the Lower East Side; but in 1888 he embarked on a commercial building project.

By court order, on May 3, 1888 auctioneers Scott & Myers sold the four lots at Nos. 67 to 73 Spring Street.  The Real Estate Record & Guide described the properties as having "frame and brick structures, and are well suited for improvement by a factory warehouse or store buildings.  They are within a stone's throw of Broadway."

Philip Goerlitz placed the winning bid at $74,500, just over $1.9 million in 2016 dollars.  He commissioned architects Schneider & Herter to design "two six-story brick and iron stores."  The structures were each 50 feet wide and cost Goerlitz a total of $80,000 to build.

Although constructed in two parts, the structures shared a unified Queen Anne style facade.  The cast iron base housed two storefronts with fluted pilasters.  The red brick of the upper floors combined with cast iron and terra cotta to create a medley of color and decoration.  Spandrel panels featured swirling foliate embellishments.  But it was perhaps the terra cotta ornaments masquerading as capitals along the brick piers which were most eye-catching.  Scowling women were counterpoised with joyful angels; and stern-visaged men contrasted with gentle female faces.   The use of cast iron enabled expanses of glass, thereby flooding the factory spaces with natural light.


Among the first tenants was J. W. Carroll Company, brass merchants.  When a subscriber wrote to the editor of The American Stationer in February 1892 looking for brass handles for advertising fans (a popular marketing give-away in the decades before air conditioning), he was told he could obtain them from J. W. Carroll.

At the time of that endorsement, Emile Beck was employed by J. W. Carroll Company.  He was arrested on May 15 that year after he sold $500 worth of stolen brass to a pawnbroker for $8.  During his trial on June 15 his employer, Joseph W. Carroll, testified that Beck had confessed to taking the brass; as did two detectives.

But when Beck took the stand, he changed his story.  He told the jury that he "had been ordered by Raymond Carroll, a brother of a member of the firm, to sell the metal."  Despite the absurdity of the idea that a principal in the firm would have instructed Beck to sell the brass for less than two percent of its value; the jury was confounded.  After only 30 minutes of deliberation it declared Beck not guilty.  The New York Times reported "Judge Fitzgerald looked disgusted and discharged the prisoner."

Herman Aich & Co. moved here from No. 47 Murray Street.  Its principal, Herman Aich, found himself in serious trouble in the fall of 1894 for sneaky business practices.  On November 15, 1894 The Times reported "Suit for $100,000 against Herman Aich & Co. for undervaluation of hollow pottery ware and enameled signs excited interest yesterday in the pottery trade and at the Custom House."  Government officials accused the firm of fraudulently declaring the value of its German-made goods by as much as 50 percent less. Herman Aich was arrested and paid a staggering $5,000 bail pending his trial on November 22.

In 1885 Edward D. St. George took over the business of J. E. Linde, started five years earlier.  A native of Germany, St. George had arrived in New York in 1873.   Illustrated New York: The Metropolis of To-Day said "The factories are equipped in the most approved style with the latest mechanical devices, the machinery being operated by steam-power, and every convenience is at hand that in any way would add to the perfection of the output of lesson the cost of production, employment being furnished steadily to about forty hands."


Despite that glowing description, a visit from Edward Thimmie in June 1895 was less complimentary to the factory conditions here.  Thimmie was a member of an assembly committee appointed by the City "to investigate the condition of girls and children under age who work in factories and stores."

Including the E. D. St. George Mfr. Co. among "the sweatshops on the east side," he described its workers as all immigrants.  The Times reported that he "said that most of the workers lived on bologna and dry bread."

The "forty hands" that Illustrated New York mentioned in 1888 had grown to a staff of 21 men and 42 girls.  "Their average wages are from $5.50 to $7 a week," according to Edward D. St. George.  The  girls were earning what would amount to about $160 per week today.  The newspaper's headline read "Working Their Young Lives Away."


Heller & Company moved into the building from No. 228 Mercer Street just before the turn of the century.  It was among the first of apparel manufacturers in the building and would be joined later by like firms like the Superior Manufacturing Co., makers of women's undergarments.

Heller & Company made boys' clothing, but was perhaps best known for its "bicycle suits" which it called the "features of our stock."  The firm boasted "over six hundred varied styles of boys' bicycle and knee pants."

Like Edward D. St. George, Heller & Company employed immigrant workers.  Antoinetta Macciocia was hired as a sewing machine operator here in 1899 at the age of 13.  Seven years later she was still here and had fallen in love with another worker, 22-year old Vincenzo Tanora.  Their wedding was planned for the second week of December 1906.

Newly arrived Sicilian immigrant Giuseppe Figlia was hired in the shop the first week of November that year.  The 20-year old tailor was described as "small and unprepossessing" and for some reason Antoinetta immediately disliked him.  For two weeks he complained "that the girl had taunted and ridiculed him by humiliating and insulting remarks."

He later explained "From my first day in that place as a tailor she taunted me, made fun of me, and ridiculed me at every turn."  The Sicilian's indignation of being mocked in front of his male co-workers was intolerable.  After two weeks of abuse, he said "I felt that a climax as coming soon."

At 12:25 on the afternoon of November 26 Policeman John Fulvey was walking along Spring Street when a man ran from Nos. 67-73 crying "Murder!"  Fulvey ran up the stairs to find a scene of indescribable chaos in Heller & Company.

There, according to The New York Times, he "found a dozen Italians beating a small man, covered with blood, who lay prostrate on the floor.  Near him lay the motionless form of a girl and a man groaning with pain.  Another Italian was trying to aim a pistol at the man who was being beaten.  In the corner of the big room cowered half a hundred screaming girls."

The man being beaten was Giuseppe Figlia,  Driven to his breaking point, he had brought a pistol with him to work that morning.  When Antoinetta started her usual tormenting, Figlia took action.

He told police "At noon, when everybody was eating and laughing and chatting, I went to the sink to wash my hands.  Then this girl came along and purposely bumped into me--like that.  I turned and objected, and she leaned toward me and spat in my face."

Figlia answered the insult with two bullets--one in the left cheek and another through the heart.  The tailor said "She fell without a word."

The girl's fiance, Vincenzo Tanora, sprang at the gunman and struck him over the head with an iron bar, knocking him to the ground.  Figlia shot twice more, shattering Lavora's jaw and wounding his right shoulder.

Antoinetta had died instantly.  The New York Times dramatically reported "At her throat the dead girl wore a cheap pin representing the heads of a man and woman, their lips touching.  A drop of blood had fallen upon the lips."

Figlia later said "Then it seemed that everybody in the place tried to kill me at once."  He was right.  One tailor had grabbed his pistol and was aiming it just as Policeman Fulvey entered.  He and the two other officers who arrived minutes later saved his life.  He was "covered in blood" when he was escorted by the police "through a lane of threatening Italians," as described by The Times.

Figlia's trial was held on April 18, 1907, and lasted less than five hours.  Among the witnesses was Vincenzo Tonaro.  "He told how he had jumped in to save his sweetheart and had been badly wounded himself," reported The Times the following day.

Figlia pleaded guilty and seemed to feel throughout the ordeal that he had been fully justified in his defending his own honor.  The Times wondered why his counsel had not offered a similar defense to that of Harry Kendall Thaw, who had been tried three months earlier in the murder of Stanford White.

"The defense which Figlia could have made was of much the same character as that which Thaw put forward.  At the time of the shooting he declared that the scoffs of the girl had driving him to frenzy and that he did not know what he was doing,"


By 1912 the store at Nos. 71-73 was home to Budd's office furniture store.  Owned by William Budd, it was one of three stores in Manhattan where the retailer dealt in the latest in office furnishings--like oak roll top desks, wooden filing cabinets and oaken office chairs.


In 1928 20-year old stenographer Shirley Bergman worked in the Geringer Light and Fixture Company here.  On Monday afternoon, December 10 that year she walked to a nearby bank.  She was being watched by 28-year old taxi driver Martin Baylos.

Baylos, who was found guilty of stealing an automobile in 1919, assumed that Shirley was picking up the her company's payroll.  Payroll at the time was normally distributed to employees in cash; but Shirley was merely making a deposit of checks.  So she was unconcerned as she walked back into the Spring Street building.

In the elevator Baylor attacked, trying to rob Shirley Bergman of the payroll she did not have.  The panicked young woman jumped from the cab and plunged down the shaftway to her death.

Because of his prior conviction, Baylos was urged by his attorney to plead guilty to manslaughter rather than face a first degree murder charge.  He was sentenced to Sing Sing on April 3, 1929.

Oddly enough, it was not the last time that New Yorkers would read about Martin Baylos.  For several years his name appeared in newspapers when he performed in the prison's annual talent show.  On December 5, 1933, for instance, The New York Times reported on "The Sing Sing Revue" which opened that night before an audience of 674, "who came from far and near to witness the performance by the prisoners."  The newspaper noted "Martin Baylos, comedian of the revue, who was sentenced for manslaughter, takes the part of a judge."

As the 20th century drew to a close the Soho neighborhood was rediscovered by artists.  In 1990 the Sragow Gallery moved into the building; joined soon after by British furniture designer George Smith's 3,000-square foot showroom.  The upper floors were converted to office space, and in 2006 owner United American Land LLC completed a renovation which it described as a "restoration."