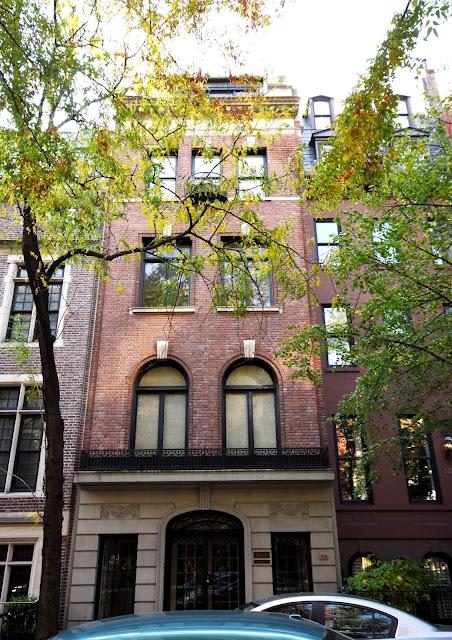 Julius Goldman was born in Philadelphia in 1863.  Within six years the family moved to New York City where Julius's father, Marcus Goldman founded the banking firm of Goldman, Sachs & Co.  Of the Goldman brothers, it was Henry who eventually joined his father's firm.  Julius chose to study law.  He graduated from Columbia College, and earned his Ph.D. at the University of Heidelberg.

Goldman purchased the four-story brownstone-fronted rowhouse at No. 132 East 70th Street from M. Kahn in March, 1887.  One of the earliest houses in the neighborhood, it was built in 1869.

Moving in with the family was Sarah's father.  Now retired, his progressive ideas had made a notable impact on Temple Emanu-el, where he had been made rabbi in 1857.  The Sun said of him "Dr. Adler labored to introduce the vernacular language into the ritual of the synagogue, to expunge those prayers which still breathed the spirit of the middle ages, to secure the equal participation of women in the public worship, and to remove the civil disabilities of the Jews."

On June 10, 1891 Rabbi Adler died in the 70th Street house at the age of 81.  In reporting his death, The New York Times remarked that "his whole heart and soul were bound up with the cause of progress...He fearlessly denounced from his pulpit the sin of slavery, and upon the outbreak of the civil war became known as a warm admirer of Mr. Lincoln and a staunch supporter of the Government."

Both Julius and Sarah were involved in social causes.  He was a founder of the Federation for the Support of Jewish Philanthropic Societies; and as tuberculosis emerged as a major concern in urban areas, Sarah became active in the National Tuberculosis Association.  And while Julius was born in America, he held fast to his German roots.  When the old German-American Burger-Bund was reorganized in 1897, the executive committee met at the Goldman house to lay out its principles.

The first years of the 20th century saw marked changes taking place in the neighborhood.  Out-of-style brownstones were being razed or remodeled into fashionable, modern residences.  On May 31, 1913 The Real Estate Record & Builders' Guide noted that Julius Goldman had hired architect Herbert M. Baer to design a replacement five story brick dwelling on the site of the old rowhouse.  The projected cost was $35,000; in the neighborhood of $865,000 in 2016.

Millionaires like Andrew Carnegie had made the neo-Georgian style fashionable for residential architecture.  The dignified brick and stone homes stood in stark contrast to the often-fussy Beaux Arts mansions of the last generation.  Baer's design was refined and understated.  The arched entrance was centered within a rusticated limestone base.  Above the flanking openings, the service door and a window, were panels of carved swags.


The three stories of red brick above were ornamented only by stone keystones and a minature balcony at the fourth floor.  Behind a balustraded parapet, the fifth floor appeared as a mansard roof with two elaborate dormers.  The up-to-the-minute amenities inside included an Otis elevator.

The Goldman children all attended the Sachs School for Boys and Girls.  The school was founded by their great-uncle, Julius Sachs.   Sachs was an esteemed educator and his personal interest in classics and archaeology directed the curriculum.  As with most well-to-do students, the children were educated in Greek and Latin.

Hetty would stand out among her siblings.  After graduation, she entered Bryn Mawr College in 1899; and in 1909 enrolled at Radcliffe College as a graduate student.  She would go on to be a prominent archeologist; one of the first female archeologists to excavate in the Middle East and Greece. 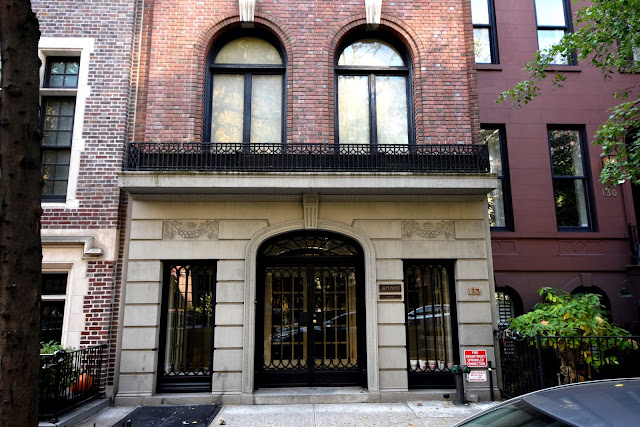 McCabe's father owned the Cathedral Funeral Chapel on West 90th Street.  Now McCabe announced his intentions to alter No. 132 "for a funeral chapel."  The renovations converted the ground floor to The Abbey Funeral Home; while the upper stories remained a single family residence.

The Abbey was the location of the funerals of several high-profile New Yorkers.  Among them was that of Police Inspector Matthew J. McGrath, who had also distinguished himself as a member of the United States Olympic Team four times as a weight-thrower.  On the morning of February 1, 1941 the funeral cortege left The Abbey for Our Lady of Mercy Church in the Bronx.  The procession of vehicles was six blocks long and was escorted by police motorcycles and cars.

A few months later, in October, "Smokey Joe" Martin's wake was held here.  Retired Fire Chief Joseph B Martin was a legend among firefighters.  His refusal to give up in fighting blazes even after being injured resulted, in one instance, of his commanding his men from a stretcher.   According to some, his nickname was passed on to the mascot of the National Forest Service, Smokey Bear.

That same year the McCabes ran afoul of the Casket Makers Union.  They routinely purchased their caskets from a Boyertown, Pennsylvania manufacturer who did not employ union workers.  Early in September 1941 picketers appeared on front of The Abbey.  Shortly afterward, Mrs. McCabe received a telephone call from the union's business agent who told her to stop buying coffins from the Boyertown firm.

Mrs. McCabe responded "Your differences are with the manufacturer and not with us."

On October 4 she received another threatening telephone call.  And again, she ignored it.

Four days later, at around 2:30 a.m., the doorbell rang at the West 90th Street funeral home.  Mrs. McCabe admitted two young men who said they needed to arrange for a funeral.  As they entered, they attacked her with blackjacks.  She fell unconscious to the floor.

As the thugs fled, they left a note that read "Final warning.  Don't buy Boyertown."  Two weeks later the police were still searching for the attackers.

Another high-profile funeral in The Abbey was that of William Egan in September 1943.  Among those who paid their respects was Governor Alfred E. Smith.  Egan had been made station master of Pennsylvania Station in 1897.  On March 11, 1933 The New Yorker had noted "He has charge of a thousand men, but his greatest job is taking care of famous people who pass thru the station.  Calvin Coolidge used to stop in and chat and Teddy Roosevelt worked on his book while waiting in Egan's office."  More than 800 mourners attended the funeral mass for the beloved station master.


The Abbey left in 1955 and No. 132 was converted to a dressmaking shop, with two apartments per floor above.  Among the tenants were Peter R. Gimbel, grandson of Adam Gimbel, founder of the Gimbel stores.  He was living here when he married Virginia McCulloch Taylor in the spring of 1960.

The Goldman house, with little apparent change to the exterior, appeared on the market in 2016 for $24.5 million.  Inside, much of the interior detailing survives.