Harvard-educated attorney Frederick Prentiss Foster was a member in the firm of Forster & Forster, with offices at No. 76 William Street.  Wealthy and successful, he was a member of the Harvard and University Club.  But as the 19th century drew to a close, he extended his attention to the development of the Upper West Side; buying plots and erecting a range of structures.

In 1897 the 44-year old saw the completion of two significant buildings--the handsome neo-Georgian West Side Republic Club at No. 2307 Broadway, designed by Julius A. Schweinfurth; and his own home just around the corner at No. 270 West 84th Street.

Although Forster used a different firm, Kafka & Mott, to design his mansion, the architects followed the same general theme; producing a Colonial-inspired bow-fronted dwelling that rose five stories.  The ruddy brick of the upper four floors was relieved by the white stone of the splayed lintels and broad quoins.  Above the bracketed cornice a stone balustrade sat like a tiara.  At street level, a Corinthian-columned porch protected the centered entrance.

Forster's expansive home was not merely an ostentatious display of his wealth.  He and his wife had eight children.  The family of 10, plus household staff, easily filled the five floors.  The Forster family maintained a country estate at Milton, Massachusetts, as well.

From the outside everything seemed perfect within the Forster household for 15 years.  Like their father, the growing sons were enrolled at Harvard, and on September 29, 1912 society pages announced the engagement of daughter Dorothy to Rutger Bleecker Miller.  But storm clouds were gathering.

Although Dorothy's announcement listed the 84th Street address, the family had already quietly moved out.  Just four days later The Sun reported on Gubernatorial candidate Joe Hedge's visit to the city the evening before.  "The first thing he did was to help the West Side Republic Club at its housewarming at 270 West Eighty-fourth street."

Forster had agreed to lease the house to his Broadway tenant, who hired architects Walker & Chichester to do $5,000 in renovations.

With no fanfare, the family slipped off to the Massachusetts home.  Then, on March 2, 1913 The Sun revealed that Forster "is accused of having left his law business in New York, retiring to his country place at Milton, Mass., because of securities in several large estates which were under his control."

The newspaper exposed hundreds of thousands of dollars missing from various estates handled by Forster & Forster--one alone in the amount of $948.549.  The Sun accused, "It was learned, on the other hand, that Mr. Forster has been maintaining his home at Milton, Mass, in an elaborate manner" and mentioned Dorothy's "large wedding," saying ironically that "Invitations to the wedding were sent to several women who are now said to be seeking an accounting of funds alleged to be due them from Mr. Forster."

Forster's counsel provided a surprising defense.  "It was said in behalf of Mr. Forster last night that he has been suffering from paresis for some months and has not been accountable for his acts," reported The Sun.  (Paresis is an inflammation of the brain, often a condition of syphilis.)

The the meantime, the West Side Republic Club attempted to fend off bad press of its own.  On March 21, 1913 The New York Times reported that a meeting had been held to "put the club on record as denying rumors in circulation since December that the club was opposed to taking in Jewish members."

It all started in December when 27 candidates were presented.  "Two of them were Jews," said the newspaper, "and they were blackballed."

The unflattering rumors that spread through the club community were, in fact, baseless.  At the time of the blackballing the West Side Club had 20 Jewish members.  Nevertheless, to clear its reputation, the club voted on a resolution declaring "this club hereby emphatically denies, and brands as absolutely false, all reports that citizens of the Hebrew faith are not welcome to membership in the West Side Republican Club."

The much beleaguered Frederick Prentiss Forster died on the night of January 19, 1915 at the age of 62 in his Massachusetts home.   Over the next few years his real estate holdings in Manhattan were liquidated and on April 25, 1920 the Lebertan Corporation purchased the three abutting properties on the 84th Street block--Nos. 268 through 272--in an all-cash deal.

The West Side Republican Club became nervous the following January when Pedro j. Candeau, Jr. purchased No. 272 and began negotiations on "an option on the adjoining house at 270 West Eighty-fourth Street," as reported in the New-York Tribune.  The newspaper noted "He has just formed the 272 West Eighty-fourth Street Realty Company for the undertaking."

Candeau's plans were obvious.  He would either join the two houses internally to become apartments or, more likely, raze them for a modern structure.  But the West Side Club beat him to the punch.  On July 31 The New York Herald reported that the organization had purchased their clubhouse, thus saving it.

The political club remained in the former Forster house until 1940 when, somewhat ironically considering its 1913 scandal, it sold the property to Congregation Oref Shorlem.  The newly-founded congregation, according to the website of Congregation Ohav Shalom, was formed "by a group of German Jews fleeing the horrors of Nazi German."

In reporting the sale on July 13 The New York Times mentioned "It is now occupied by a Republican organization and will be altered extensively for religious services and meetings rooms for the congregation."   Those alterations included a synagogue on the first floor, class rooms on the second and third floors, and one apartment each on the top two floors--one for the sexton and the other for the caretaker. 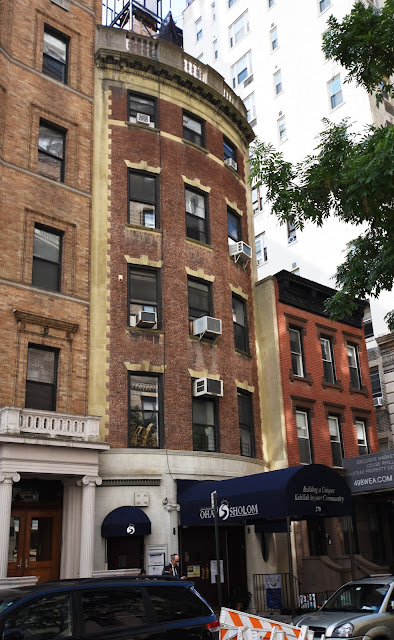 Congregation Ohav Shalom continues here after more than 75 years.  The Forster mansion has lost its impressive porch, its ground floor has received less than sympathetic treatment, and unsightly window air conditioners punch through the replacement windows.  Nevertheless, the dignified Colonial Revival house maintains its integrity; a reminder of a man who lived lavishly on other people's money.