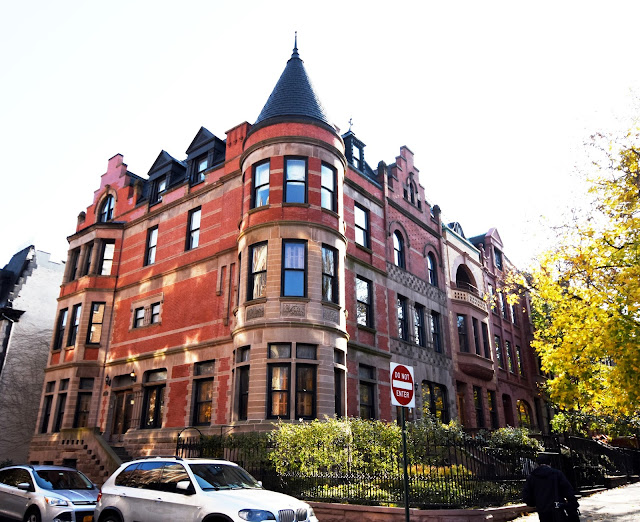 Developer Jacob D. Butler was well-known in the real estate field.  His impressive Lincoln Building on Union Square--designed by Robert Henderson Richardson--was completed in 1890.  At the same time he was highly involved in the development of Hamilton Heights, creating long rows of upscale homes.

That same year he finished a row of 15 residences on Convent Avenue on the long, interrupted block between West 141st and 144th Street.  Designed by architect Adolph Hoak, the row was a delightful blend of styles--Flemish Revival, neo-Tudor and Romanesque Revival.  Construction had begun three years earlier, in 1887 and resulted in a particularly picturesque row.  No. 339 Convent Avenue, however, stood out.

Anchoring the corner of Convent Avenue, the mansion stretched 100 feet along West 144th Street, where, despite its avenue address, the entrance sat above a sideways brownstone stoop.   The red brick and brownstone house mainly exhibited elements of the Romanesque Revival style--the corner tower with its conical cap, carved spandrel panels, and the clustered colonnettes under a single capital, for instance.  But then Hoak changed gears with a Flemish Revival stepped gable above the three-sided bay to the rear.

He and his wife, the former Mary O'Connor, announced the engagement of daughter Grace Cecile to John Lewis Bull on January 11, 1913.  The following year the newlyweds' first child, John Lewis Bull, Jr. was born.  He would grow to be a renowned ornithologist and author.

In June 1916 Charles A. King vehemently denied reports published a week earlier in various newspapers  that he had sold his mansion to Eva Wardach.  There was, however, apparently a hint of truth in the rumors; for he sold the property five months later to Cornelius P. Toomey.

Within a few years Toomey resold the house to lawyer-politician Charles. H. Tuttle.  Educated at Columbia University, Tuttle was no stranger to Hamilton Heights.  His father, the Rev. Isaac H. Tuttle had been pastor of St. Luke's in The Fields Church in Greenwich Village when, in 1892, the church moved to Convent Avenue and 141st Street (on the opposite end of the block from No. 339).  It was Isaac Tuttle who recognized the neglect and decay of Alexander Hamilton's The Grange and had the house relocated next to the church.

Charles Tuttle and his wife, the former Helene L. Wheeler had four children.  By the time the family moved into the Convent Avenue mansion he had made a name for himself as a reformer.  In 1927 President Calvin Coolidge appointed him as United States Attorney for the Southern District of New York.  He earned a reputation as a staunch anti-corruption champion, launching investigations into the activities of public officials, gangsters and crime rings.  Tuttle was unruffled by the status and power of the men he investigated and in 1930 sent Albany's Democratic political boss Daniel P. O'Connell to jail for contempt of court when he refused to answer questions.

Helene Tuttle's widowed mother, Katherine Harding Wheeler, lived with the family.   She died here in January 1929; her funeral being held in the house on January 17.  At the time daughter Charlotte was attending Vassar College.  She brought happier news to the family a month later when The New York Times reported she had made the honor roll.

The following year, on September 17, 1930, Tuttle resigned as U. S. Attorney in order to run for Governor of New York against Franklin Delano Roosevelt.  Helene, who was actively involved in political and social issues, proved to be a strong asset.  She was Vice President of the Women's Republic Club and Chairman of the club's civic committee.

Helene routinely held meetings of the club in her home.  Her awareness to racial issues--possibly vitalized by the changing racial make-up of the Hamilton Heights neighborhood--was often high on her agenda.   On April 19, 1930, at a meeting in the mansion, she announced the initiation of a "civic center" in the Hotel New Yorker.  One of the goals, she told reporters was to "try to organize various racial groups and for that purpose will inaugurate a series of 'courtesy evenings,' when women of these groups will be our guests and meet with us for discussion."

Three days after her husband announced his campaign for Governor, she added another item to the group's endeavors.  The New York Times reported "A particular attempt, Mrs. Tuttle said, would be made to bring into the Republican ranks young women and first voters."

Charles H. Tuttle's campaign included all the speeches and hoop-la associated with major politics.  He was the guest of honor of the Republicans of Washington Heights on October 4, 1930; an event which included a press-grabbing spectacle.  The Times announced the occasion would "include a parade with torchlights, red fire and band music, from the Tuttle residence at 339 Convent Avenue to the clubhouse of the Twenty-third Assembly District Republican organization."


Tuttle lost the election; possibly because conservative Republicans felt he was too soft on Prohibition.  He hoped to campaign on his anti-corruption background; but that was overshadowed by his views that states, not the Federal Government, should control alcohol consumption and production.

He returned to practicing law as senior partner in the firm of Breed, Abbott and Morgan; continued on the vestry of St. Luke's Church; and was the Chairman of the Council of Religious Education; and served on the Rapid Transit Commission.

Helene, in the meantime, continued her work as a leader in women's politics.  She was elected President of the New York State Women's Republic Club in April 1931; but resigned on December 20.  She made the announcement following a Christmas party in the Tuttle home, saying she wanted to "devote more time to forming a State-wide organization of young people's Republican clubs, and also to organize non-partisan groups of future voters, now in their 'teens."

And she continued her work to improve the conditions of the black community.  On October 19, 1933 The Times reported that "Mrs. [Fiorello] LaGuardia and Mrs. James Russell Parsons...will be guests today at a Fusion tea to be given by the Negro women of the regular Republican organization of the Twenty-first Assembly District.  The tea will be given at the home of Mrs. Charles H. Tuttle."

By mid-century the private homes of the Convent Avenue block had been mostly divided into apartments.  No. 339 managed to escape drastic change; being converted into just two large residences.  Then, in 2001, new owners poised to restore the mansion to a single family home.

But they were stopped by motion picture director Wes Anderson, who pleaded to leave the property in its somewhat frowzy condition--at least temporarily.

Anderson had been looking for a set for the comedy-drama film The Royal Tenenbaums.  He rented the Tuttle mansion for six months; filming inside and out.  The motion picture made the mansion a celebrity of sorts in its own right. 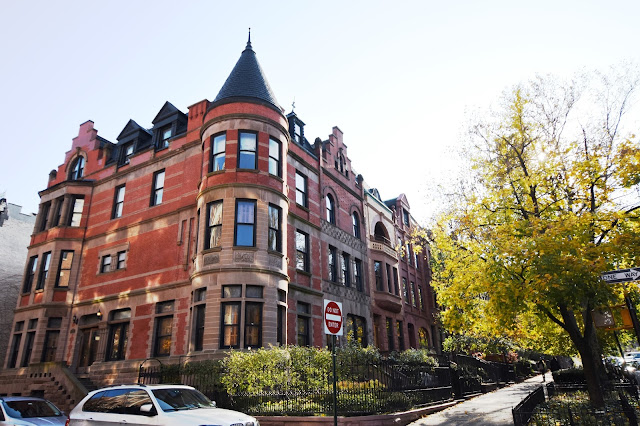 When the production crew pulled out, renovations ensued.  Today the Charles H. Tuttle mansion is again a private home and, except for updates like replacement windows, looks much as it did in 1890.  And, as it did then, it still commands the spotlight along Adolph Hoak's delightful row.