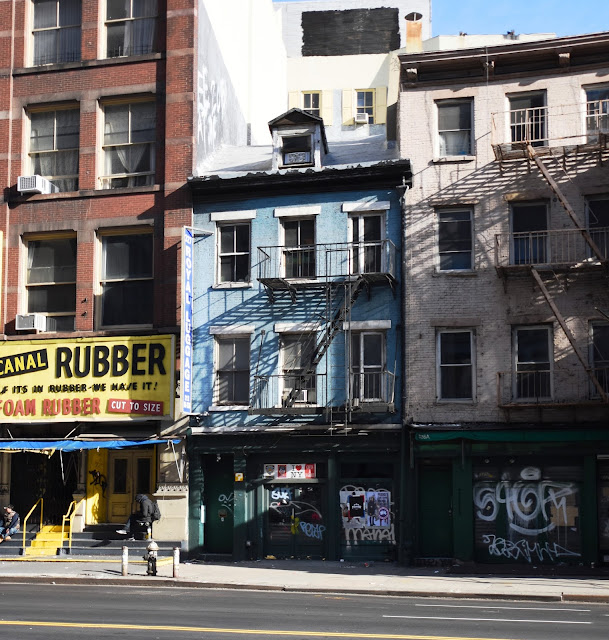 In 1817 an ordinance was passed to fill in the marshy Lispenard’s Meadows and two years later a sewer was laid along the length of Canal Street which provided further drainage.  It was about this time that Michael Quinn purchased the newly-erected house at No. 327 Canal Street from Isaac Lawrence.

The three-story Federal-style building was faced in brick.  Its simple stone lintels and sills, and a single dormer in the slightly-peaked roof were no different than those of the other seven nearly identical houses in the row built by Lawrence.  It is quite likely that No. 327 included a shop on the ground floor.

By the 1850s the upper floors were being used for commercial purposes as well.  A human hair wig shop, possibly Kolosky & Ober, was on the second floor.  On April 26, 1859 the firm placed an advertisement in The New York Herald the details of which might be surprising to 21st century readers.  "Wanted--A girl to work at ladies' ornamental hair and wig making; also a little girl to make herself generally useful; would be willing to have her bound as an apprentice to the above business, an orphan preferred."

Before long Simon Brill operated his dry goods store, S. Brill & Co., at street level.  Mary Grimshaw walked into the store on July 3, 1866 with larcenous intentions.  The New York Times reported "watching her opportunity [she] stole 16 yards of lace of the value of $40."  Mary did not get far with her loot, which would amount to about $620 in 2016.  She pleaded guilty on July 10 and was sentenced to six months in the penitentiary.

In 1850 Allen B. Wilson had obtained a patent on his improved sewing machine and three years later went into partnership with Nathaniel Wheeler to form Wheeler & Wilson.  Their sewing machine won a Prize Medal at the Paris Industrial Exposition of 1861.  Simon Brill purchased more than one of the labor-saving machines and expanded into apparel manufacturing.

On April 1, 1869 his advertisement appeared in The New York Herald.  "Permanent employment will be given to first class operators on Wheel & Wilson's sewing machine at S. Brill & Co.'s 327 Canal st."  Three months later he was looking for "an experience cutter for ladies' undergarments."

Simon Brill seems to have moved his entire operation upstairs that year; and Charles A. Moulton moved his "fancy goods store" into the ground floor space.  He was looking for "Smart lads" in September 1869, "one accustomed to pack fancy goods; one for a retail fancy store, and one for a wholesale fancy store."

In the meantime, the ground floor got a make-over in 1870 with a new cast iron storefront.  And upstairs Kolosky & Ober was still dealing in human hair wigs.  On October 16, 1872 the firm advertised "A wholesale human hair importing house wants travellers on commission; those travelling for other lines of goods preferred."   Six months later the firm was still looking.  "Wanted--A party to sell on commission in New York State for a human hair house; must be one travelling for some other house."

Despite years of operation, Kolosky & Ober fell on hard times.  The Financial Panic of 1873 forced many well-established firms into bankruptcy.  On May 3, 1876 The New York Herald reported that the "importers and dealers in human hair goods" had failed.

Another tenant of No. 327 Canal Street suffered bankruptcy in February 1884.  B. A. Dryer was a wholesale dealer "in notions and hosiery."  The New York Times reported "The failure is attributed to dull trade, competition, and depreciation of stock."

After more than a decade here, S. Brill & Co. had moved to Greene Street around 1878.  No. 327 Canal Street continued to see the comings and goings of other tenants.  In the 1880s Simon Weil's "fancy goods" was here; as were Whitehead & Kahn, makers of "lace and lawn caps;" and brothers David W. and Henry Dazian, "dealers in silks and velvets."

Simon Weil was more more focused on selling fancy goods than in keeping up with current events.  Ferdinand Ward was arrested on May 22, 1884 on charges of stealing $1 million from the vaults of the Marine Bank.  The details of the sensational heist were widely publicized in newspapers as the trial date neared.

On October 26, 1885 the exhausting task of jury selection continued.  Hundreds of men had been interviewed and dismissed.  At 2:00 on that day alone "more than 100 names of the panel had been exhausted," reported The New York Times.  And then the name of Simon Weil was called. The Sun said "Hope revived in everybody's breast as soon as he began to answer questions."

He was asked "Did you ever read about Ward?'

Puzzled, the attorney followed up "What Henry Ward?"

"Why, Henry Ward Beecher; but I don't know whether he is the man this is about, though."

The Sun reported "That settled it.  Mr. Weil was at once sworn and ordered to take his seat in the twelfth chair."

An episode remarkably similar to that of Mary Grimshaw's theft in Simon Brill's store two decades earlier occured on June 15, 1889.  The New York Times reported "Thomas McQuade...went into the store of H. W. Dazian, 327 Canal-street, yesterday, and made some frivolous inquiries.  As he was going out he carried off a roll of silk valued at $25.  He was detected in the theft and was pursued and arrested."


It was the first of several robberies here.  Cloak manufacturers Whitehead & Co. fired a clerk, Herman Grossman, on July 14, 1892.  Two days later Grossman came back, pleading with the foreman to take him back.  While they were talking, he noticed that the foreman had placed a package containing the firm's payroll on the desk.

Grossman told him that Mr. Whitehead was motioning for him.  When the foreman walked away to see what Mr. Whitehead needed, the out-of-work clerk made off with the $500 payroll.  The impetuous crime was ill-thought-out, since his identity was clearly known.  He was arrested on the Bowery on Friday night, August 19.

Three years later Herman Steigerwald was working as the bookkeeper for Nathan Schessel, a cloak manufacturer in the building.  He made $10 a week (a little less than $300 per week today) and lived in a boarding house.  In June 1895 he began presenting checks for several hundred dollars to his boarding house keeper to cash.  The Times noted "He had access to his employer's mail and abstracted the checks, forging the indorsement [sic]."

Around the time of Steigerwald's embezzlement, Catherine d'Anglemont purchased the building.  She bought and sold Manhattan real estate despite living most of the time in Paris.

It was about then, too, that the Hirschberg Company moved into the second floor.  The firm manufactured paints and enamels, the ingredients of which were dangerous and flammable.   At around 8:00 on the morning of August 16, 1900 the workers had not arrived yet.  Only Herman Hirschberg and a porter, Sigmund Goldberg were there.

Suddenly an explosion rocked the floor.  Hirschberg was working toward the back.  The New-York Tribune reported "He saw the porter, Goldberg, run out of a rear room crying 'Fire!' and his clothing in flames.  At the same instant the flames burst out over Hirschberg."

The two men ran to the street, where firemen had just arrived.  They threw blankets over Goldberg and extinguished the flames.  Herman Hirschberg did not stop running.  The New York Times said "Later was found at a drug store some distance away and was taken to St. Vincent's Hospital."  He suffered burns to his face and arms.

The Tribune noted "It is not known what caused the explosion  The force of it was such as to blow out the entire rear part of the second floor wall.  The loss is estimated at $3,000."

One firefighter, Edward Mulligan, was overcome by the noxious fumes.  "He staggered to the fire escape opening out on Canal-st," reported the Tribune, "and climbed out of the window.  He was seen to feel for the supporting rods of the fire escape, and almost fell, when grabbed by a fellow fireman."

Whether the substantial financial loss caused by the explosion contributed to Hirschberg Company's failure is uncertain.  Nevertheless, on April 2, 1902 the firm closed and declared its bankruptcy.

For several years, beginning in 1904, the Singer Manufacturing Co. operated a sewing machine store at ground level.  The Star Sample Co. was here by 1918, offering an $18 per week salary to a "printer, all-round man, steady," in June that year.

By now almost all of the old Federal-style houses along Canal Street had been razed or altered beyond recognition.  But No. 327 and its neighbors at Nos. 321 and 323 somehow escaped the trend (despite No. 327's being declared an unsafe building three times between 1912 and 1913).


In 1938 Alex E. Rosenthal opened his "general stationery" store here; and in 1950 Mildred J. Rosenthal purchased the building, assessed at the time at $20,000 (in the neighborhood of $197,000 today).  The New York Times pointed out that the property "had been in the d'Anglemont family for more than fifty years."

While rather beleaguered, the residential Federal appearance of Michael Quinn's house is still obvious after nearly two centuries.

photographs by the author
many thanks to reader Robert Brenner for suggesting this post
Posted by Tom Miller at 2:37 AM