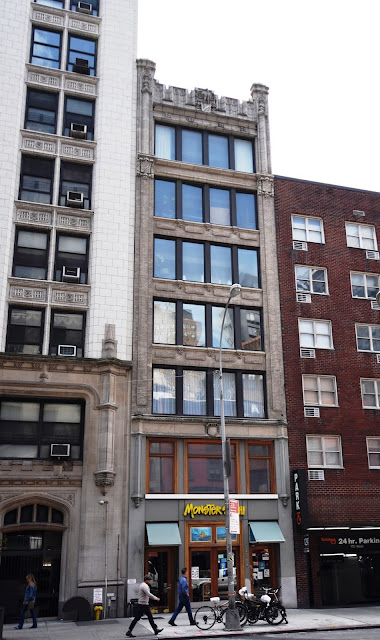 By the last quarter of the 19th century the former high-stooped residence at No. 158 West 23rd Street, between Sixth and Seventh Avenues, had been converted to a store at street level, with meeting rooms and offices above.  At least one last residential tenant was still here in 1893.

The retail store was home to the well-known picture frame shop of S. Marekdorff.  Upstairs were the offices of architect Voltaire Combe and the International Order of King’s Daughters and Sons.  The Order had been founded in 1886 by a group of ten women, and by 1892 had grown to over 200,000 members, according to The World Almanac that year.  From its headquarters on 23rd Street it published the monthly The Silver Cross.  The publication, said the Almanac, “deals with every topic by which women may be helpful to humanity.  Its work in aid of every charitable object is effective and increasing.”

One charitable cause that the Order apparently overlooked was that of Mrs. Nellie McGibney, a widowed Irish immigrant with little money who lived in the building.  Her son, Daniel, had been sent off to the Elmira Reformatory, and in 1893 he died “under peculiar circumstances,” according to newspapers.  Nellie, who had just lost her father, was further distressed when the Reformatory would not release her son’s body to her, saying “they do not wish to have the body seen.”

Newspaper reports of the disturbing situation resulted in sympathetic visitors at the 23rd Street house.  On August 13 1893 The New York Times reported “Her landlord dispossessed her from her home at 158 West Twenty-third Street, on the ground that too many people called upon her after her son’s death.  Her rent had been paid, but she was in destitute circumstances.”

Nellie owed money on her furniture, still in the rooms from which she had been evicted.  She explained her situation to dealer, B. M. Cowperthwait & Co. and, as related in The Times, “after she had told her story, the firm delighted her by closing her account for money due on furniture and by giving her the furniture and enough money to move her goods and secure other rooms.”

Fire broke out in the large six-story building of Hoefer Wall Paper Mills at Nos. 148-150 West 23rd Street on June 6th, 1904.  It originated on the fourth floor and spread quickly to the upper floors, breaking through the roof.  It spread to the six story building next door at Nos. 152 and 154, where the house furnishing dealer Manhattan Trading Stamp Co. and the photo studio of G. W. Thomas did business.

As firefighters battled the inferno, it spread to No. 156 and then to No. 158, causing damage to the offices and the store of S. Markendorff.  It took firefighters more than eight and a half hours to extinguish the blaze, which resulted in a staggering $73,882.23 in damages.

In June 1910 the old building was purchased by Mentor Realty, headed by developer Samuel Heyman.  The firm took out a $38,000 loan to erect a “seven-story loft and store.”  In August architect Charles B. Meyer filed plans.  He projected the building cost at $50,000--nearly $1.3 million in 2016 dollars.


Completed in 1911, its Edwardian take on Gothic Revival utilized a variety of materials.  The two-story retail level was stone, above which were four floors of beige brick.  The uppermost story was clad in white terra cotta.  The Gothic motif was carried out with shields and crests, medieval ornament, and a blind crenellated parapet.  A stately terra cotta spread-winged eagle stepped slightly away from the theme. 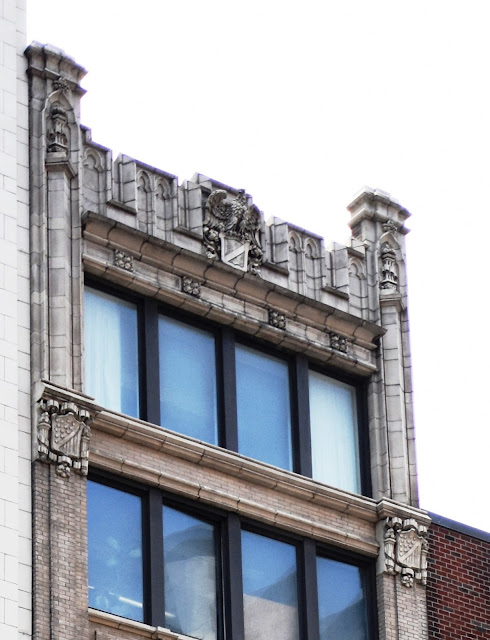 Apparently Heyman was not entirely satisfied with the results for in July 1911 he hired architect George Dress to design a new “marquise” over the entrance.  The upgrade cost him $350.

The upper floors of No. 158 filled with women’s and children’s clothing makers.  In 1912 the Pansy Waist Co. advertised in Virginia, looking for an “experienced salesman to handle a popular line of ladies’ silk and cotton waists on commission basis only at 7-1/2 per cent as a side line.”  Other manufacturers in the building were S. Khoury & Co. which manufactured kimonos, and Traina Bros. who made dresses.  Stark & Trattner were here at the same time, turning out infants’ and children’s wear, much of it under the well-known brand name Noxall.  And Harry Kay & Co. was in the building by 1915, also making children’s dresses. 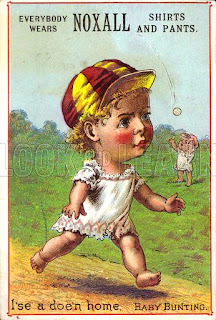 Samuel Heyman updated the building once again in March 1916 when he commissioned the well-known architectural firm of John B. Snook & Sons to replace the stairways, install “fireproof windows,” and extend the balconies.  Following the $800 upgrades, Heytman transferred title of the building to his wife, Amanda, in September 1918.  She sold it a year later in November to Michael Kaufman for $125,000—about $1.7 million in 2016 dollars.  The New-York Tribune noted at the time of the sale that all the leases were about to expire.

The change in tenants was apparent by 1919 as Perez, Morsoff & Gaal, “manufacturers of a general line of fur coats and sets” moved in.  Jacob Hamer moved his silk dress making operation into the building; as did Silverman & Weinstein, silk goods makers.  They may have initially regretted the move.

In the spring of 1920 a six-week rash of burglaries of silk merchants frazzled the police.   On May 8 the New-York Tribune reported that six thefts within the past weeks had netted burglars over $38,000.  “One firm, that of Silverman & Weinstein, at 158 West Twenty-third Street, is reported to have been robbed of $15,000 in goods, but acting under instructions of the police declined to make any comment in the matter.”  In an attempt to keep the burglars unaware of the scope of its investigation, the NYPD often requested victims to withhold information from the newspapers.

Later that year, on October 7, Simon Heiman paid Jacob Hamer for a “job lot of silk dresses” with his check for $263.  By the time Hamer found out that the check was worthless, Heiman had already been sent to Sing Sing prison on another charge.  Hamer was a patient man, though.  Four years later when the 60-year old Heiman was released, he was immediately arrested and held on $1,000 bail on Hamer’s charges of passing a bad check.

In the meantime, silk-related firms continued to move in.  The American Silk Yarn Company leased the store in 1921.  But by the end of the Great Depression, the Garment District had migrated north, settling above 34th Street.  By mid-century the building would see a completely different set of tenants.

In 1950 M. Zimmerman opened his newly-formed Burton Press, a graphics arts service here.  In 1951 Doval Sales Company advertised its wholesale novelties, including “Hula Hula Dancers” at $3 per dozen, “large walking chimpanzee,” “large squeeze lighter,” and “lipstick lighters” which could be had for $.90 a dozen.   In the 1970s New York City dog owners could enroll their pets in a nine-week training course at the City Dog Obedience School here.

By 1984 the building was home to the Eccentric Circles Theater; and a year later the highly-popular A. M.Ozeki Japanese restaurant opened.  The ground level opened as Monster Sushi on August 18, 1997 where it remains today. 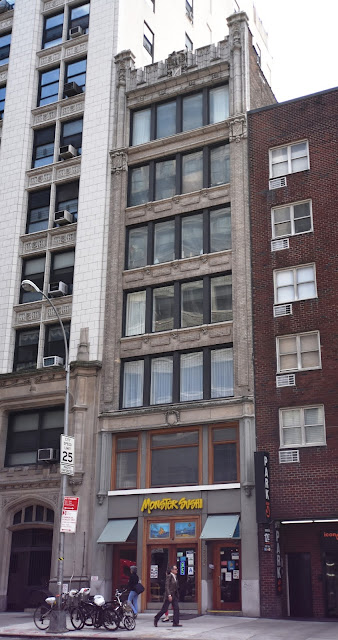 In 2006 the upper floors were converted to residential space—one apartment per floor.  Largely overshadowed by its hulking neighbors, the 1911 dress-making building retains its handsome Edwardian persona.

photographs by the author
Posted by Tom Miller at 1:58 AM