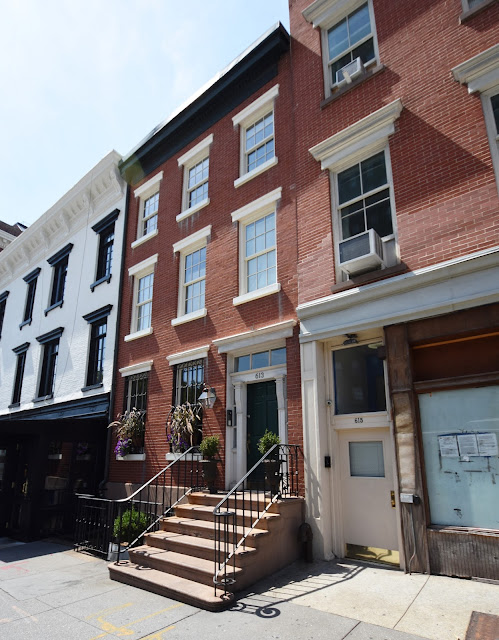 In 1842 architect Edmund Hurry designed and built his own brick-faced, three story home at No. 613 Hudson Street.  The modest Greek Revival dwelling sat above a shallow brownstone English basement and featured a handsome entranceway with unassuming pilasters and sidelights.

In addition to his architectural business, Hurry served as a Commissioner of the Common Schools in the Ninth Ward while living here.  He moved out in 1851, just as his career was reaching its peak.  The following year he would be appointed the Consulting Architect for the New York Crystal Palace; his crowning achievement.

Five months after the Confederate Army opened fire on Fort Sumter, life on Hudson Street continued as normally as possible.  At 10:30 on the morning of September 26, 1861 auctioneer George Holbrook sold the entire contents of No. 613 Hudson Street; its former owner apparently having died.  Holbrook's advertisement in The New York Herald promised “all the genteel parlor, chamber, dining room and kitchen furniture, &c. of the above house.  Dealers, as well as others, are invited, as all must be sold and the house vacated.” 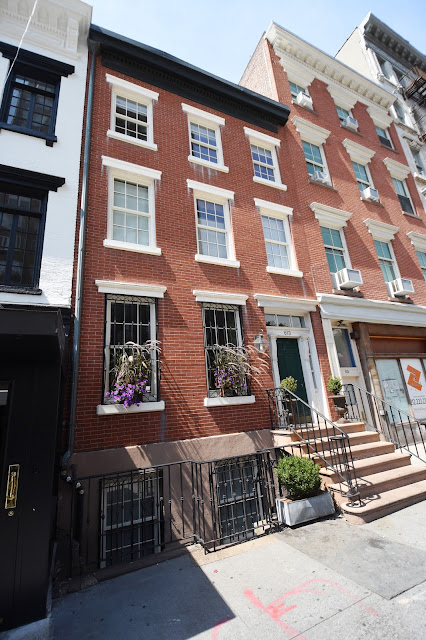 The house was the scene of the funeral of Smith Bryant on Monday, May 13, 1872 at 1:00.  Bryant had died of a heart attack the previous Friday.  Three years later, on April 8, 1875, Sheriff William C. Connor conducted the sale of the house in a foreclosure auction.  Somewhat surprisingly, it was the sheriff who bought it.

Conner conveyed title to Jessie, “wife of Daniel Clark,” the following July.  The sheriff had been operating No. 613 as a boarding, or rooming house.  Among his tenants was Elia Jane Huling, who taught in the primary department of Grammar School No. 47 on East 12th Street.

The Clarks lived in Jersey City.  Three days after Jessie received the title, she transferred it to Sarah Crygler, possibly a relative based on the “nominal” monetary exchange.   The rapid-fire ownership continued as Crygler sold the house to Henry B. Welcher, of Peekskill, New York, who sold it to William C. Carpenter on August 20, 1877 for $5,000.  The sale price would translate to about $117,000 in 2016 dollars.

Carpenter ran a “lodging house” at No. 613.  The term differentiated it from a boarding or rooming house.  Lodging houses offered no amenities like meals or common space.  Instead, for a much cheaper fee the lodgers received an over-night bed with (hopefully) fresh sheets.  Carpenter and F. S. Carpenter, most likely his son, operated the lodging house at least through 1898.

Independence Day celebrations in New York City at the turn of the century were filled with danger and mayhem.  Boys and men fired pistols wildly in the streets and fireworks were uncontrolled.  In 1912 Robert Haven Schauffler, in his book Independence Day, recalled “It then seemed to be a day wholly devoted to boyish pleasure and mischief, sure to be followed by reports of hairbreadth escapes and injuries more or less serious, sometimes even fatal.  The day was one of terror to parents, who, while deeming it unwise to interdict to their sons the enjoyment of gunpowder, dreaded to see them maimed of disfigured for life by some unlooked-for accident.”

On July 5, 1906 The New York Times reported “Nearly five hundred accidents due to fireworks and at least one of which ended fatally were reported to the police as incidents of the Fourth of July celebration in Manhattan alone.”  Among those injured was a roomer at No. 613 Hudson Street, Henry Buhrens, who was treated at St. Vincent’s Hospital for a “wound of the hand.”

It was around this time that the house was purchased by Louis Dern and his wife, Lizzie.  The couple had three children, Arthur, Lilian and Jessie.   They apparently continued to rent to roomers.  Louis died in the house on December 1, 1916.  Lizzie and the now-adult children (Arthur R. Dern was 29 year old at the time of his father’s death) remained here for just over three years.

When Lizzie sold the house on February 21, 1920 to Catherine Cook, it was described as a “three story brick tenement.”  While the Cooks lived in Gillette, New Jersey, M. S. Cook had run a wholesale stationery business in New York for years.   Among his customers was the United States Government in 1907.  In 1922 the Educational Red Book—a buyer’s guide for school superintendents—listed M. S. Cook’s stationery business at No. 631 Hudson Street; most likely in the basement level.

Hudson Street in 1922 was nothing like the street where Edmund Hurry built his home in 1842.  Brick houses had been razed or converted to commercial establishments, and produce wagons and delivery trucks replaced the carriages of 80 years ago.  As the neighborhood continued to change, No. 631 resisted the trend.  Residents in rented rooms came and went throughout the 20th century. 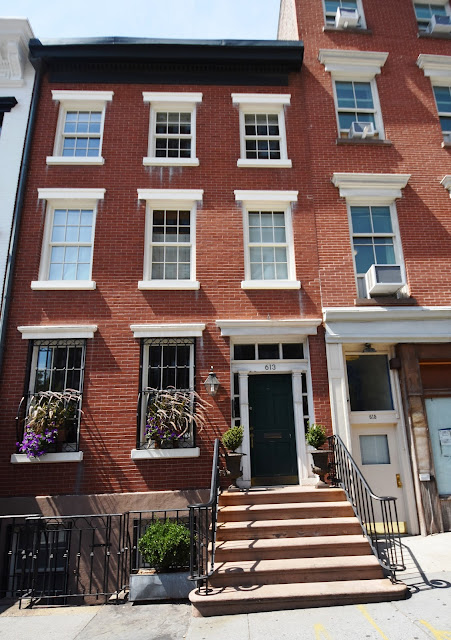 In 2002 a renovation was completed which brought Edmund Hurry’s house back to a private residence.  The stoop, removed in the 20th century, was reproduced and six-over-six mullions were installed in the windows--as closely as possible restoring the picturesque brick house to its 1842 appearance.