The J. B. Francis Herreshoff House - No. 620 West End Avenue 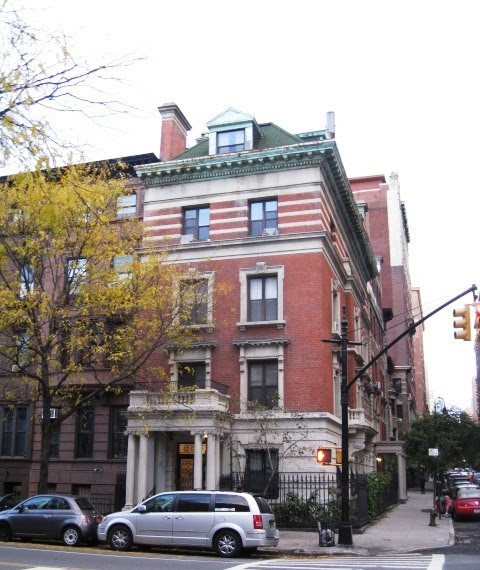 As the 19th century drew to a close, the Realty Improvement Co. laid plans for an unusual project--mirror-image mansions on West End Avenue on opposite corners.  Two would rise at the northeast corner of 90th Street, and their counterparts at the southeast corner of 91st.  In between were eight brownstone rowhouses erected in 1897.

Architect Hugh Lamb filed plans for the bookend-like buildings in December 1899.   Like its twin on the northern end of the block, No. 620 West End Avenue would be five stories tall and 26 feet wide.  The Renaissance Revival house melded with No. 273 West 90th Street; the two appearing at first glance as a single, expansive structure.

Unlike its muddy-colored neighbors, No. 620 was a mix of vibrant red brick and white limestone.  An especially handsome limestone entrance portico distinguished the rusticated base.   Imposing stone window surrounds and a stone balustraded balcony on the 90th Street side added to the dignified design.  A smaller balcony appeared directly above the first, at the fourth floor, where limestone bands alternated with the red brick. 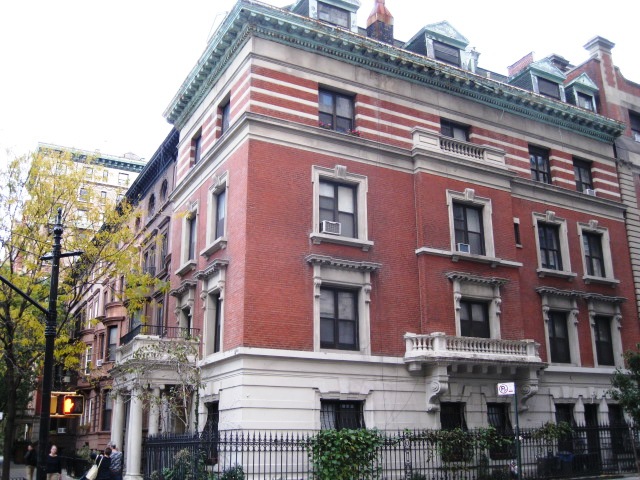 Russell had led a remarkable public life.  Born in 1840, he studied law at the age of 18 and in 1867 was chosen a delegate to the Constitutional Convention.  In 1869 he was elected District Attorney of St. Lawrence County, and in 1877 was appointed County Judge.  Four years later he was appointed Attorney General for the State of New York.

In 1891 Leslie Russell was elected to Congress, but never took his seat.  He was almost simultaneously elected to the State Supreme Court and went that route instead.  After a decade on the bench he resigned, just about the time he purchased the West End Avenue house, to resume his legal practice.

Sadly, the well-respected justice would not enjoy the new home for long.  In January 1903 he became ill, and died in the house on the morning of February 3 at the age of 63.

In the spring of 1905 No. 620 was leased by Francis B. Arnold, the principal in the wholesale perfumery firm F. B. Arnold & Company.  The wealthy merchant's family traced its roots to the Mayflower.  The move into the lavish new home was conveniently timed for daughter Dorothy's debut into society.  The young woman had graduated from Byrn Mawr that same year.

On December 10, 1905 The New York Times reported "On Thursday, Miss Dorothy Arnold will 'come out' at a reception given by her mother, Mrs. Francis R. Arnold, 620 West End Avenue.  This is the residence into which Mrs. Arnold moved late last Spring.  The debutante is a granddaughter of the late D. H. Arnold and a niece of Rufus W. Peckham."  (Peckham was a United States Supreme Court Justice.)

By 1910 the Arnold family had moved to No. 108 East 79th Street.  Dorothy Harriett Camille Arnold's name would appear in newspapers nationwide that year after she left the house at around 11:00 on the morning of December 10 on her way to buy a dress for her younger sister's debut reception.  She was never heard of again.

After spending around $100,000 searching for their daughter, the Arnolds finally rewrote their wills, including the identical lines "I have made no provision for my beloved daughter, Dorothy H. C. Arnold, as I am satisfied she is not alive."

In the meantime, John Brown Francis Herreshoff and his wife, Emilie (known familiarly as Mildred) were living at No. 620 West End Avenue.  A metallurgical chemist, Herreshoff was president of the General Chemical Company, vice-president of the Nichol Chemical Company and affiliated with the Herreshoff Manufacturing Company, builders of torpedo boats and yachts.  In 1908 he became the second winner of the Perkin Medal, considered the highest honor in the United States chemical industry.

The couple's youngest son, Frederick, was a rather famous golfer.  He had brought unwanted publicity to the Herreshoff household in 1909.  On January 22 that year the Perrysburg Journal reported "Frederick Herreshoff, Yale man, golf champion and youngest son of J. B. Francis Herreshoff, a wealthy manufacturer of New York, astonished his parents by announcing he had secretly married Miss Fay Faulkner, a show girl, last August."


The Herreshoffs moved temporarily into the Carleton House on Madison Avenue at 47th Street in 1914 while repairs were being done to the residence. On May 3 an out of town friend, Mrs. Andrew Anthony, stayed at there.  She was to attend a dinner at the Plaza and Mildred offered to loan her jewelry for the occasion.  Mildred's maid, Anna Dickerson, took an envelope with an $800 diamond necklace and a $1,200 diamond ring to the front desk, entrusting it with Alfred Keller.  It vanished.

Two weeks later no trace of the items had been found and, despite his denial that he had received the package, Alfred Keller was arrested and charged with grand larceny.

The following year "Freddie" would cause even more trouble.  He suffered a nervous breakdown and was admitted to the Gladwyn, Pennsylvania Sanitarium.  His father discovered that someone was sneaking liquor into the facility "the use of which is alleged to have accentuated the nervous breakdown," according to The New York Times on October 29, 1915.  "Rumors were circulating that a nurse was supplying alcoholic drinks to the patient."  Herreshoff took legal steps to confine his son.

Other troubles in the Herreshoff household came to light in December 1918 when the latest edition of The Social Register was distributed.  The New-York Tribune was quick to notice the shocking revelation, reporting on December 19 "The address of Mrs. Herreshoff is given as 375 West End Avenue, while Mr. Herreshoff, with his son Francis, lives at 620 West End Avenue, which formerly was also the residence of the wife."

After some investigative reporting, the newspaper updated its readers the following day.  "John Brown Francis Herreshoff...said yesterday that although their homes were within a few blocks of each other, he had not seen his wife for two years."

Mildred was Herreshoff's second wife.  The couple had been married in 1882.  Now she sued him for divorce, alleging "misconduct with an unidentified woman at hotels in this city, this month and last July," according to the Tribune.

The sordid affair played out in the newspapers when the case came to court in June 1919.  Mildred testified that "in the latter years of their life together he displayed an indifference toward her."  Readers were left wondering who the "woman with 'strawberry blond hair'" was who was deemed the cause of the marital rift.


On June 3, 1919 the New-York Tribune noted "There was only one point on which witnesses disagreed...That was the color of the corespondent's hair.  One said it was 'strawberry blond,' another called it auburn.  This slight discrepancy, however, did not affect the action of Mrs. Herreshoff, for the witnesses agreed on the main point involved.  This point was that Mr. Herreshoff was found with the blond woman in a room at the Hotel Navarre."

Mildred did not ask for alimony in the settlement, saying that her former husband had been paying her $18,000 a year since their separation.  That generous allowance would amount to about $20,500 per month today.

Five days after the divorce the 69-year old chemist married the strawberry blond, Carrie Ridley Enslow, daughter of the late Huntsville, Alabama physician, Dr. James Lucas Ridley.  The Sun reported "The bride entered the church with her young son, Ridley Madison Enslow." and noted "She wore as her only ornament a collar of diamonds, a gift of the bridegroom."

The article mentioned "When they return from their wedding trip Mr. and Mrs. Herreshoff will live at 620 West End avenue."  Indeed, on September 4 that year Herreshoff transferred the title to the house to Carrie's name.

The new Mrs. Herreshoff threw herself into the social whirl of a New York socialite while retaining her Southern ties.  On June 27, 1920 The New York Herald reported "At the home of Mrs. J. B. F. Herreshoff, 620 West End avenue, on Monday afternoon, a new club was organized and will be known as 'The Daughters of Alabama.'"  Not surprisingly, Carrie was elected its president.

Her social activity along with the couple's extensive travel was reflected in The New York Herald's "Social Notes" on March 16, 1921, when it announced "Mr. and Mrs. J. B. Francis Herreshoff have returned recently from a trip through Spain, Italy and Egypt.  Mrs. Herreshoff will entertain members of the D. A. R. Manhattan Chapter and the Daughters of Alabama at 620 West End avenue to-morrow."

Carrie's son who had escorted her down the aisle also lived in the mansion.  He graduated from Columbia College in 1922, and at that June 5 ceremony was honored by Major C. W. Foote with a commission as Second Lieutenant in the Infantry Reserve Corps.

Not long afterward the Herreshoffs sold No. 620 West End Avenue and moved into the Sherman Square Hotel.   Shortly after they returned from a trip to Asia early in the summer of 1924 Carrie was diagnosed with cancer.  She died in St. Luke's Hospital at the age of 46 on October 5.

Rather shockingly, less than six months later James Brown Francis Herreshoff married Carrie's sister, Irma Grey Ridley, in Chattanooga.  He further raised eyebrows when, after the reading of Carrie's will revealed she had left him nothing, he sued his stepson for $750,000 from her estate.


In 1955 No. 620 West End Avenue was converted to apartments.  It now contained a doctor's office and half of the physician's duplex apartment on the ground floor, the remainder of the duplex on the second floor, and three apartments on each of the upper stories.  A subsequent renovation in 1973 resulted in a total of five spacious apartments. 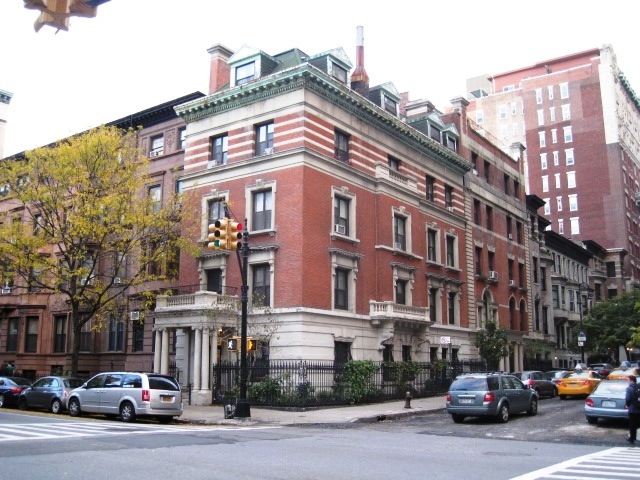