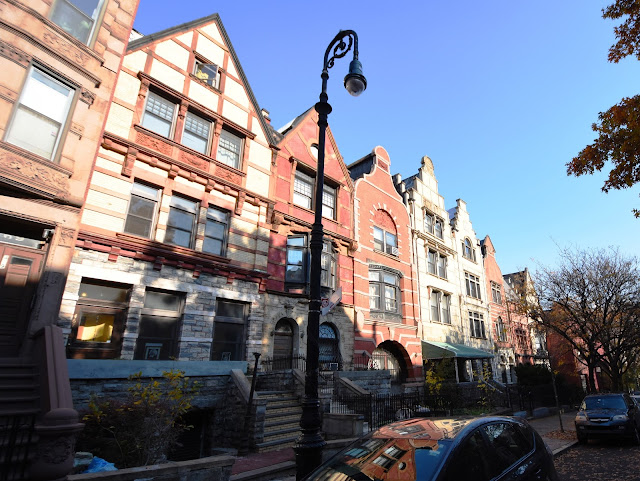 By the mid 1880s the once pastoral area surrounding Alexander Hamilton's 23-acre estate, The Grange, was becoming a suburb of New York City.  Extended public transportation and the high location near the Hudson River made it a desirable residential neighborhood.

On December 4, 1886 The Real Estate Record & Builders' Guide remarked on the development of what would be known as Hamilton Terrace.  "The situation of the Hamilton Grange property is just far enough back from the river front to be sufficiently sheltered from winds, and for convenience of access to every part of it by the established means of transit."  In addition to a landscaped park, the article said, the "tasteful dwellings" would bear "more resemblance in the suburbs of London than to anything in the vicinity of New York.

The Guide went on to note "More than twenty elegant houses, of English Gothic, Flemish and other styles, as modified by the taste of the architect Mr. Wm. E. Mowbray, are already planned and will be built without delay.

William H. DeForest, a wealthy silk dealer, and his son, also named William, had gotten into the real estate development game.  They partnered with William Mowbray's contractor father, Anthony, in the ambitious development project that would transform stretches of 144th Street and Convent Avenue.

Nos. 453 through 467 were among the houses designed by William E. Mowbray.  Late Victorian architects held the conviction that they were the rightful heirs to all that had gone before.  And on West 144th Street Mowbray unleashed that premise with gusto.

At a time when rowhouses were completed within months, the eight residences would not be finished until 1890.  (This was due in no small part to William H. De Forest's bankruptcy and subsequent commitment to an insane asylum during the process.)

The wait was well worth it.  Mowbray had created a romantic row--a nonchalant blending of Tudor and Flemish Revival, splattered with Romanesque Revival and Queen Anne.  The finished project on the quiet residential block provide was a much an enchanting fairy tale stage set as a row of upscale houses.


William H. De Forest, Jr. took No. 453 as his own home.  He was gone by 1902 when it was home to Sophia Curtiss Hoffman, the wealthy widow of real estate operator George Hoffman.  Sophia was well known among society and philanthropic circles.  Having seen the suffering of an invalid aunt during her childhood, she helped found the Chapin Home for the Aged and Infirm.    Although the building was named after the Rev. Edwin H. Chapin; it was Sophia's brainchild and her large financial contribution earned her the right to lay the building's cornerstone.

An ardent reformed, she was also highly active in the Association for the Advancement of Women, and the treasurer of the nation-wide Federation of Woman's Clubs.  She was a founder, as well, of Sorosis, the first professional women's club in America.  Like many of the residents along the row, Sophia was a member of the Universalist church.

Sophia Hoffman's married daughter, Kitty Morse, was living in Highland Park, New Rochelle by 1903.  Around May 1 that year Sophia hired the Metropolitan Express Company to transport household items to her daughter.  Included with the glassware and china were family heirlooms, most importantly an oil portrait of George Hoffman.  The large, gilt-framed artwork was five feet high and four feet wide.

When the "open van" reached the Morse residence, Kitty Morse was crestfallen to find her father's portrait had been damaged.  The express company refused to admit responsibility and a long court battle lasted into 1905.  Sophia, who had paid $15 for the transport, sued for $1,231.05 damages--more than $34,000 in 2016.

Sophia had been ill for more than a year when the trial wound down in 1905.  Her troubles worsened when her only son, Curtiss, died in Brooklyn in early summer. A few months later, while visiting Kitty's home in New Rochelle, Sophia died on September 12, 1905.  Her funeral was held in the 144th Street house the following day. The house was bequeathed to Allan Curtiss Hoffman who leased it until 1921, when he sold it.  Hoffman was general manager of Outing Magazine and a Director in The Scientific American.

In 1902 the Universalist minister Dr. Augusta J. Chapin had briefly shared No. 453 with Sophia Hoffman.  Soon thereafter she purchased No. 459.  The remarkable woman was the eldest of 11 children born to Almon Morris Chapin and Jane Pease Chapin.  At just 16 years old she entered Olivet College and in 1864 became one of the first ordained female minsters.  In 1893 she was the first woman in America to receive a Doctor of Divinity degree.


The 1898 book What Women Can Earn noted "Besides holding a number of pastorates, she has been a wide lecturer, and was chairman of the Woman's General Committee of Religious Congresses at the World's Fair."   Like Sophia Hoffman, Augusta was moneyed and involved.  In addition to her religious work, she was a charter member of the American Woman Suffrage Association, and of Sorosis.  She still had time, however, to spend her summers in Newport.


Three months before the death of her close friend Sophia C. Hoffman, Augusta Jane Chapin died on June 30, 1905 at the age of 68.  No. 469 was purchased by attorney and vice-president of the Western Union Telegraph Company, George Chew Atkins.  Atkins was also a Universalist and his wife was a patroness of the Chapin Home.

The upscale tenor of the block at the time was exemplified by the William L. Swan family, who purchased No. 461 next door by 1904.  The house was originally owned by stone merchant James Sinclair, who died in 1892.  The head of James Sinclair & Co. he had supplied the stone for such notable structures as the Washington Square Arch, the Trinity Church steeple, and the Stock Exchange.

Henry B. Bates was next in the house.  A member of the New York Athletic Club, the Down Town Association and the Metropolitan Museum of Art, he was a founder of the Heights Club in 1898; an exclusive men's social club for the rapidly-developing neighborhood.  Shortly after Martha Elizabeth Bates' death in the house on Sunday, June 23, 1901, the Swan family took possession.

William L. Swan had graduated from Princeton in 1869.  Like a few other "clubmen" of the city, he preferred to live on his inherited wealth rather than pursue a profession.  The family owned a large summer estate, The Terrace, near Theodore Roosevelt's home in Oyster Bay, Long Island.  He was one of the founders and the first Commodore of the Seawanhaka Corinthian Yacht Club, and would ever after carry the title of Commodore.

Swan and his wife, the former Isabel Thurston, had two children, William Jr. and Elizabeth.  In October 1905 12-year old Elizabeth was given a birthday party.  She described her Halloween-themed party it in a letter to the New-York Tribune.  The four-hour soiree (from 5:00 to 9:00) included the expected games and favors of any children's birthday party, as well as supper.

But Elizabeth's description not only reflected the family's well-do-to circumstances; but the innate racism of the period.  "The ice cream was in several forms," she wrote.  "One was a little darky and a watermelon.  One was a cute little 'Jap' holding a Halloween lantern...The place cards had little darkies, one on each end, courtesying [sic] to each other."

The Swan's Oyster Bay home would be the scene of a murder in spring 1923.  Swan's Japanese chef, Isaak Namba, and his chauffeur, Robert Stuart, had a disagreement over breakfast in the kitchen.  When Stuart grabbed the cook by the neck, Namba seized a six-inch kitchen knife.

Hearing the scuffle, William Swan entered from the dining room.  Namba later testified "Mr. Swan told me he didn't know what was the custom in Japan, but that in his country a knife is not used for fighting.  Mr. Swan went into the dining room smiling." The fight continued, ending in Robert Stuart's death by stabbing.  Isaak Namba was convicted on manslaughter charges.

By, now, however, the Swans had moved from West 144th Street. Although their former home was described in a 1921 advertisement as "private house, large and airy;" it was operated as a "15-room rooming house" by the late 1930s.

No. 463 had been home to the Thomas E. Vermilye family for years.  A wealthy contractor, his family summered in Seabright, New Jersey when not traveling abroad.  (On March 22, 1908 The New York Times advised that Susan Gertrude Vermilye and her daughter, Gertrude, would be receiving informally on Wednesday afternoons until June 1.  "They will leave with Mr. Vermilye some time during the first week of June for the other side.")    Now, in 1938 it was operated as a rooming house by Delia Ward, who owned at least one other house on the block.

The same fate came to No. 465, which had for decades been the home of John H. Morrison and his family.  Morrison was the senior warden of St. Luke's Protestant Episcopal Church on Convent Avenue and 141st Street.  When he died in the house at the age of 83 on May 16, 1933, he willed the house to St. Luke's.  The church promptly sold the property a year later to Hugo Lange "for a rooming house."

The change in the neighborhood was partly due to white panic.  Wealthy families abandoned the neighborhood as the black community shifted into the area from downtown in the late 1920s and early '30s.  By 1947, for instance, the offices of the Association of Negro Life and History had its offices in Augusta Jane Chapin's house at No. 459.


And No. 467 had become home to Hubert Thomas Delany, the first African American Tax Commissioner of New York, one of the first black judges in New York City, and Assistant United States Attorney.  A civil rights pioneer, he was a Director of the NAACP, and attorney to black poet Langston Hughes and civil rights activists Dr. Martin Luther King, Jr. and Adam Clayton Powell, Jr.


On November 14, 1943 Eleanor Roosevelt was the guest of honor at a reception in Delany's house celebrating the inception of the Harlem Activities Committee of the Colored Orphan Asylum of Riverdale.  The First Lady stressed that "while war conditions had accentuated the problem of juvenile delinquency, the problem always had been with us in all parts of the country."

She stressed that a "helping hand" was necessary "to every young person, regardless of race or religion...Our juvenile delinquents for the most part never had a fair chance in life--their background, poverty and family life, or lack of it, area really to blame for what they are." 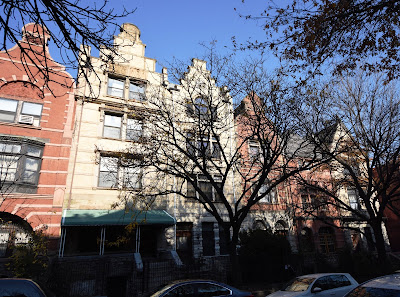 More than 125 years after the fanciful row was completed, its charm remains undiluted--an architectural treasure hidden in plain sight.