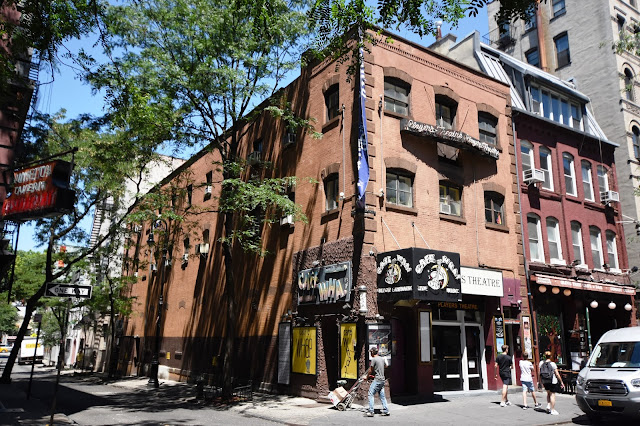 Alexander MacDougall was one of the founders of the Sons of Liberty and he succeeded Benedict Arnold in the command of West Point.  Although he had added an extra "L" to the end of his family's surname, it was dropped again when he was posthumously honored with the naming of MacDougal Street.

The Greenwich Village street was lined with modest Federal-style homes in the late 1820s.  No. 115, on the northwest corner of Minetta Lane, was the home of cabinetmaker John Vanboskerck by 1836.  Nearly a decade later, on July 4, 1844, the owner placed an advertisement in the New-York Daily Tribune:  "Wanted--A good Cook, who understands all kinds of cooking, pastry, &c.  Either a young or middle-aged woman, but one with good reference and unblemished character."

The Messler family lived at No. 15 MacDougal Street when young Ed Messler was inducted into the Union Army on August 20, 1863.  By the end of the war, the family had demolished the house and established its coal business on the site.  When they realized they had one horse too many, an advertisement was placed in The New York Herald on November 20, 1868.  "For sale--A well bred black stallion, 15-1/2 hands, 7 years old, gentle in all harness; a good traveller.  Sold for want of use.  Inquire at coal yard, 115 Macdougal street.

The Messler family erected an attractive, utilitarian structure at No. 115 MacDougal which stretched back 100 feel along Minetta Street to include Nos. 2 through 10 Minetta Lane.  The muti-purpose building housed a stable on Macdougal, a small shop at No. 2 Minetta Lane, and residential space above.  Sparse decoration was accomplished with chunky brick quoins, and hefty brick eyebrows over the elliptic arched windows.

The Messlers' decision to demolish their home and establish the coal business on the site may have been prompted by the rapid decline of the immediate neighborhood.  Minetta Place and Minetta Street which branched off it.  The city's black population was already centered here by the 1840s; and emancipated blacks from the South crowded in after the war.   The impoverished enclave, lined with what reformer Jacob Riis would later call "vile rookeries," earned the nickname "Little Africa."

In the early 1870s the "E. Messler Coal" structure doubled annually as a polling place.  Rather surprisingly, architect Charles Hartung briefly lived in upstairs.  He listed the address as his business address in 1880.

By the 1890s Minetta Lane and Minetta Street had become even more wretched and dangerous.  Jacob Riis called the neighborhood "the social bottom."  In its small area were numerous small saloons called "black and tans" because they were the haunts of impoverished patrons of both races.  Author Stephen Crane, in 1896, remarked, "There is probably no street in New York where the police keep closer watch than they do in Minetta Lane.”

That year a typical confrontation broke out in front of No. 2 Minetta Lane.  It was the address of Irish immigrant Daniel Furey, who lived above the shop.  Furey, who made his living as a grocer's clerk, was returning home with two other Irishmen, 27-year old John Murphy, and 30-year old William Whalen who lived directly across the street at No. 3 Minetta Lane.

On Wednesday night, November 5, 1896 they had "been drinking more or less," according to the New-York Tribune.  They arrived in front of No. 2 Minetta Lane around 10:00 when "they became involved in a political argument."

Heated arguments on Minetta Lane were not customarily solved with calm logical discussion.  Murphy's solution was to suddenly pull out a knife and lunge at Whalen.  Daniel Furey tried to get the knife away from the assailant, with no success.  He later said "the men seemed to have some old grudge between them, as both threw out slurs and insinuations from time to time," according to the Tribune.

Murphy struck out at Whalen a second time.  This time Whalen threw up his hands and exclaimed "He's struck me in the stomach."  The crowd that had accumulated to watch the affray scattered when the wounded man fell to the pavement.

John Murphy fled, but ran directly into the arms of Policeman Hefferman.  Before the ambulance could arrive Whalen was dead.  The hot-headed Murphy was held without bail, charged with murder.

By the turn of the century politician Daniel S. McElroy had purchased the building, and on July 20, 1906 he and his wife transferred title to their son, Patrick.   Later that year the little store on the Minetta Lane side was the target of terrorism.

In the opening decades of the 20th century New York City was plagued with terrorist acts.  Anarchist groups were responsible for repeated bombings, kidnappings and murders.  Italian businesses were the main targets of one notorious group, the Black Hand.  On November 6, 1906 The Sun reported "The windows of a shop at 2 Minetta lane were smashed last night by an explosion in front of the place.  As the shopkeeper is an Italian, it is supposed that the bomb was exploded in pursuance of the usual black-mail programme."

Patrick McElroy found himself in financial trouble a few years later, and on May 19, 1914 the building was sold in a foreclosure auction.  Republican district leader James E. March purchased "the stable property" for $27,750.  The sale price would equate to about $680,000 in 2016.

By the time Israel Levy purchased the property in October 1920, the Minetta Lane area was undergoing a remarkable transformation.  Spearheaded mostly by developer Vincent Pepe, of Pepe & Brother, the dilapidated old structures were being transformed into artists' residences.  Working with architect Frank E. Vitelo, they intended to create a romantic "Latin Quarter," similar to the Left Bank of Paris.

After serving as a police stable and then a garage, the former Messler coal stable building underwent a momentous transformation in 1958.  By now the Beat Generation had arrived in Greenwich Village, taking over its coffee shops and bars.  The Village was the heart of Manhattan's artistic community.

On September 15, 1958 The Times reported "Donald Goldman's dream to establish permanent quarters for the Shakespearewrights, the group over which he presides as founder-producer, has come true.  Hereafter, the five-year-old organization will make its headquarters at 115 MacDougal Street."

Goldman had recently purchased the property and set to work installing a 200-seat theater.  It boasted two cutting-edge features--a stage without a curtain and, more importantly, air conditioning.

Just a year later Manny Roth's Cafe Wha? shared the space.  The nightclub-theater presented legends like Bob Dylan, Jimi Hendrix, Kool and the Gang, Peter, Paul and Mary, and the Velvet Underground.  Prominent comedians like Richard Pryor, Bill Cosby, Joan Rivers, and Lenny Bruce got their start on the Cafe Wha? stage.  (On October 26, 1961 Manny Roth was fined $60 for operating a cabaret without a license.)

Years later, in his 2009 The Rough Guide to New York City, Martin Dunford noted that here "'soul food for the ear, mind and body' was offered in the 1960s...and Allen Ginsberg and Abbie Hoffman were regular customers."

By the 1970s the theater space had become The Players Theatre.  The venue offered original stagings which were often socially topical.  It was the location, for instance, of An Evening with Quentin Crisp in January 1979.  The Times wrote "The 70-year old Mr. Crisp tells his audience...how it was to be homosexual before that was regarded as an ordinary matter."  Drama critic Richard Eder described it as "a witty, touching and instructive evening in the theater."

After first opening at the Village Gate in 1979, the musical One Mo' Time moved to the Players Theater in 1980.  The play would go on to be a box office smash on Broadway.

On October 8, 2006 Josh Barbanel, writing in The New York Times wrote "Although preservationists say the relentless rise of real estate investment is threatening the future of small theaters all over Manhattan, there are some survivors."  He pointed to the recent purchase of No. 115 MacDougal Street by musician Michael Sgouros, who announced plans to rent the theater and the upstairs rehearsal space.

Sgouros paid $6.75 million for the building.  The former owner had bought it just two years earlier "as a potential development site."  Sgouros became the property's white knight.  "I don't want to be known as the guy who closed down the Wha?" he said. 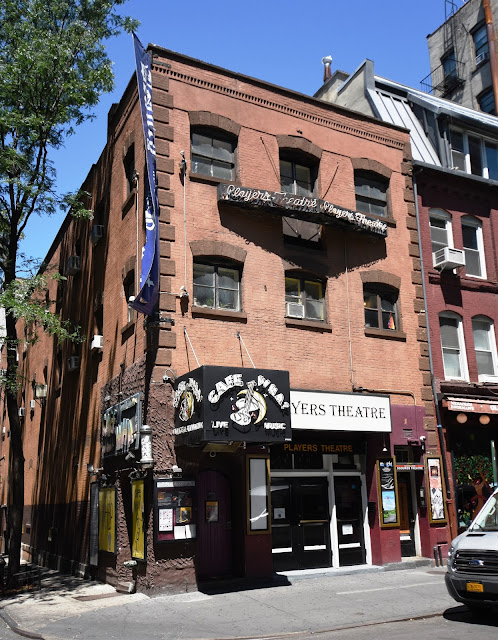 Much of the exterior of the old coal stables building survives as built.  The brick is painted in shades of brown that draw no attention to it; and even the elongated hay loft opening remains, partially obscured by a sign.  Through its doors have passed some of the most legendary performers of the 20th century.