The Federal-style homes on Greene Street were no longer the residences of respectable families by the 1850s.  Instead, the street was a notorious red light district.   On August 9, 1860, for instance, The New York Times reported "On Tuesday night the Police of the Eighth Ward arrested Mrs. Anna Maack, proprietoress of an alleged disreputable place at No. 30 Greene-street, and several women who boarded with her.  The house had been the subject of frequent complaints in consequent of its having been a resort for degraded characters."

The pesonality of the street would change again as businesses moved into the area.  The old brick houses were demolished and modern loft buildings took their place.  In 1872 the firm of Picant, Simon and Capel purchased the former Anna Maack house, along with the property next door at No. 28.  On October 24 architect J. F. Duckworth filed plans for a "six-story iron first-class warehouse" on the site.

The architect's name has long been a point of mystery.  In the previous decade he was listed as "builder" and, occasionally, as "agent."  Simultaneously, Isaac F. Duckworth started business as a carpenter/builder; but advanced to architect by 1870; and was responsible for several elaborate cast iron buildings in the Soho district.  Whether the two were related or ,in fact, the same person with the "J" simply being an oft-repeated typo, is baffling.

Ground was broken on November 25, 1872 and competed within a year, on August 29, 1873.  No run-of-the-mill warehouse, Duckworth's magnificent cast iron loft building vied with the most elaborate of Broadway emporiums.  Designed in the popular French Second Empire style, it gained dimension with a projecting central bay with free-standing columns which rose the height of the structure.  But Duckworth reserved his grand climax for the sixth floor--a complex French mansard shingled in multi-colored slate, and ornamented with elaborate dormers, finials and pediments.  Rather sadly, the narrow proportions of Greene Street made the powerful mansard level nearly invisible from the ground. 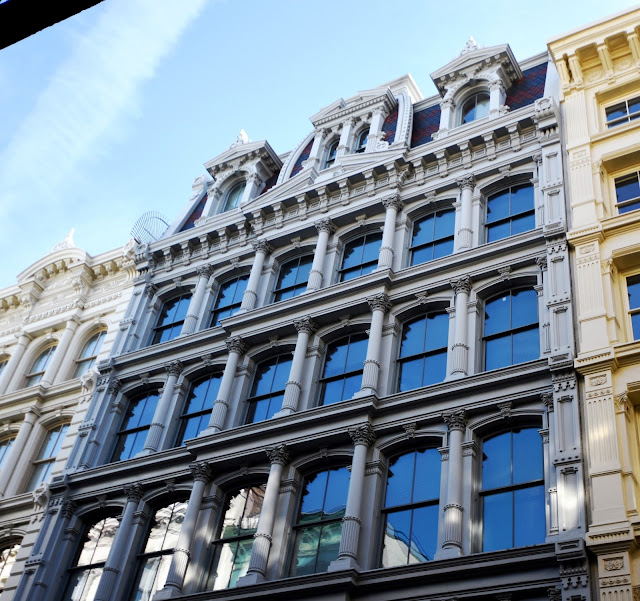 Lehmaier & Co. was founded before the Civil War as Lehmaier Brothers.  In 1877 Ludwig and Adolph Lehmaier, nephews of the founders, took over the dry goods importing and commission business; at which time the name was changed.   In the spring of 1891 the firm confirmed what many had suspected when it declared bankruptcy.   On March 18 The New York Times said flatly, "In years past the firm was regarded as one of the first in its line, but for some time past the supposition was that the firm had not made money."

An inspection of Lehmaier & Co.'s book exposed shocking irregularities.  What amazed investigators most was the the firm had not attempted to hide its illicit activities.  And their surprise that "the firm should keep such damaging records," prompted a shocking reaction from a company official.  According to The Times on June 9, 1891, he responded saying it made no difference, "because everybody did the same business in the same way."  The newspaper scoffed "But Lehmaier & Co. made the mistake of assuming that all importers were dishonest."

By 1895 E. T. Mason & Co. was the most prominent tenant of Nos. 28-30 Greene Street.   Edmund T. Mason headed the firm, which imported silks, carpets and rugs from Japan.  He was credited with introducing the Japanese items to America around 1891.  Fluent in Japanese, he was well-known among the merchants of Tokyo and Yokohama through of his annual trips.

The interest in things Japanese in the last decade of the 19th century made E. T. Mason & Co. highly successful and Edmund Mason wealthy.  The merchant was much less successful in his personal life, however.

He first married Elsie Hill of Chicago, but divorce actions quickly followed.  When Elsie died before the court case was finalized, some eyebrows were no doubt raised.  He then married Dorothy Agan; but she left him after three weeks, moving to Oklahoma and procuring a divorce.  (Afterward, she moved to New York City to operate a line of coal barges, earning her the title of "The Barge Queen.)  In 1894 Mason married Catherine Campbell, who died after the birth of her first child.  Finally, on April 19, 1900 he married again, this time to Maud Earl Thomas.

On October 17, 1903 Mason was arrested and held on $1,000, charged with bigamy.  The Barge Queen had re-emerged, claiming that the Oklahoma divorce was not valid in New York.  Mason complained that Dorothy Agan's suit was "merely an attempt at blackmail."

But before that messy affair, Edmund enjoyed tremendous success.  An indication of the goods sold by E. T. Mason & Co. was provided in The Carpet and Upholstery Trade Review in April 1896. The article noted that the company was "offering very large and attractive lines of bamboo portieres, printed cotton crepes, glass bead portieres, and printed silk on blue and white.  Blue and white is the correct thing for summer decorations, and dealers will find in these blue and white portieres, crepes and silks they will have quick sellers beyond a doubt."


Mason was rather surprised to read an announcement in the newspapers on February 16, 1897.  A special to the Chicago newspaper The Inter Ocean read "Edmund T. Mason of New York, the senior member of the importing house of E. T. Mason & Co...has assurance of his selection by President McKinley as United States Minister to Japan.  News to that effect has been received by Mr. Mason's relatives in [Chicago]."

A reporter from The New York Times rushed to Mason's home that night.  He was told "that he had heard nothing directly from President-elect McKinley, and nothing indirectly from him, that would authorize a statement."   As it turned out, it does not appear that Mason was formally offered the position.

E. T. Mason & Co. remained at Nos. 28-30 Greene Street until 1903.  The building continued to lure silk importers, like that of John I. Silberstein.  The wealthy merchant not only had a handsome city residence at No, 119 West 81st Street; but what The Times called "a large country house" at Babylon, Long Island.

Another silk merchant was Joseph Loth & Co.  Its principal, Henry A. Loth was highly involved in the Silk Association of America; and in July 1912 helped form the Committee on Cost Calculations of the Ribbon Manufacturers of the United States.  The group aimed to "furnish or check cost calculations" for ribbon manufacturers, to prevent fraud.  A month later, on August 9, he told reporters it was already successful and "will eventually bring about the elimination of a great deal of individual and trade loss." 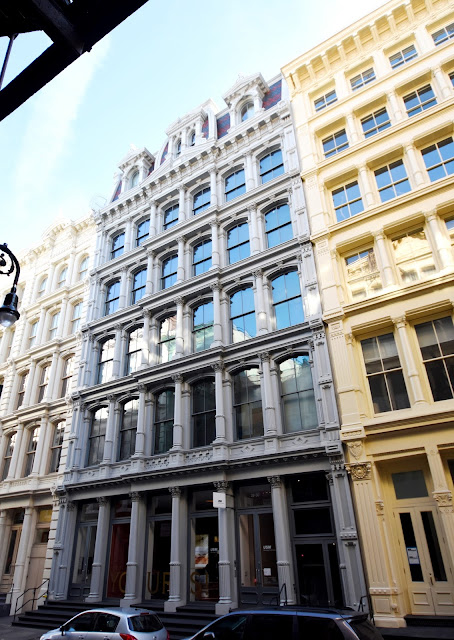 The wardrobes of Edwardian women, including their elaborate headwear, were often festooned with silk ribbon.  But in 1912 a turn in fashion eliminated much of the frills.  Henry Loth commented on the downturn in business on January 6, 1913.

"Fashion did not demand an extensive use of ribbon in the past year either for dress or millinery garniture, and, consequently, the business done was not all that could be desired.  Some fancy-edged ribbons were used for millinery trimming, and there were occasion spurts in the demand for velvets."  But, he bemoaned, "The greatest activity was in narrow widths in the cheaper grades used for tying up boxes and stationery."

Loth put an optimistic spin on the circumstances, however.  "The outlook is more favorable for 1913, as well-informed people believe that the new styles will favor a wider use of ribbon."

By mid-century the silk district had left Greene Street.  In February 1951 Rosaria Rava & Son purchased Nos. 28-30 Greene Street.  The building was assessed at the time at $60,000--approximately $547,000 in 2016.  In the almost half-century that Rosaria Rava & Son would own the building, Soho changed from a gritty industrial neighborhood to a trendy artist community.

The Greene Street property was purchased by Witkoff Group, which then resold it in April 2001 to Swiss furniture maker USM for $6.75 million.   A year later USM Modular Furniture opened its flagship showroom and announced a total restoration of the facade.


Today Duckworth's masterful cast iron structure shines again.  There are four vast residential lofts on the upper floors.  As was the case over 140 years ago, the passerby is frustrated that the building is not on a wide thoroughfare where it could be truly appreciated.

non-credited photographs by the author
Posted by Tom Miller at 2:29 AM