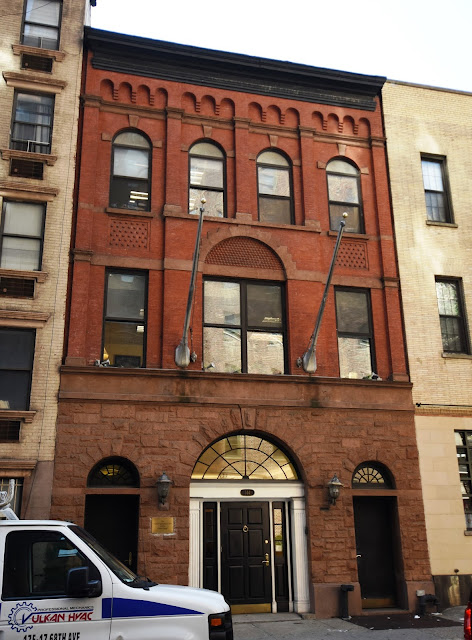 D. Willis James had lived in the mansion at No. 80-82 Park Avenue at the southwest corner of 39th Street in 1872.  His choice of location was not surprising.  His mother was Elizabeth Woodbridge Phelps, daughter of Anson Stokes Phelps.  It was the Dodge and Phelps families who had first established the exclusive residential neighborhood in 1852.  James was a partner in Phelps, Dodge & Co.

D. Willis James chose the property at No. 144 East 39th Street as a convenient site for his carriage house.  A mixture of Romanesque and Queen Anne styles, the three-story structure had much in common with several of Napoleon Le Brun's brick and stone fire houses.  The wide carriage bay was centered within the rough-cut brownstone base, flanked by two smaller arched openings.  The two upper floors were faced in red brick and trimmed in stone.  Here were decorative touches like creative brickwork in the blind arch of the hay loft and a handsome corbel table below the cornice.

The building would have housed horses and vehicles on the ground floor and provided living space on the top floor for stable hands or drivers.  No matter how distinguished the architecture of carriage houses, the noises and smells were unpleasant at best.  Behind the stable would have been a manure pit and in the heat of summer the flies and stench were repellent.   The location was near enough to the James mansion to be convenient; yet effectively far enough away. 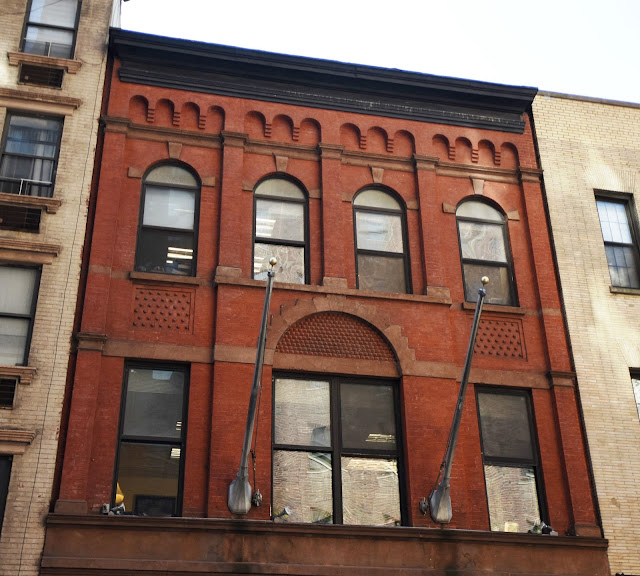 D. Willis James was married to the former Ellen S. Curtiss.  The couple had one son, Arthur Curtiss James.  The same year that construction began on the carriage house James purchased what the New-York Tribune deemed "a fine country estate" in Madison, New Jersey.

The millionaire's philanthropies, especially to the Children's Aid Society, were well-known; and Madison would benefit greatly from its newest resident.  In 1887 James purchased a large tract of land there, which he developed into a public park; and by 1890 had spent more than $250,000 on public improvements in the town--including a stone library building, an opera house, a "spacious assembly room," and stores.

James and his wife spent the summer of 1907 at the Mount Washington Hotel in Bretton Woods, New Hampshire.  Just as the season came to an end, he suffered a heart attack "while chatting with friends on the piazza of the hotel," according to the New-York Tribune.  About a week later, on September 13, he died there.


The James family retained ownership of the carriage house, hiring architect and builder Whitney-Steen Co to renovated it in 1911 at a cost of $1,500.  The updated stairs and fire doors were possibly for wealthy sisters Sarah C. and Eleanor G. Hewitt, who soon leased the stables for their use.

The unmarried women were the daughters of former Mayor Abram S. Hewitt, and granddaughters of Peter Cooper, founder of the Cooper Union.  They lived in the mansion at No. 9 Lexington Avenue, just off Gramercy Park, and maintained a 34-acre summer estate, Burris Farm, in New Jersey.

Eventually, in April 1918, Arthur Curtiss James sold the carriage house to the sisters.

When Erskine Hewitt sold the building in March 1939 the buyer announced its intentions "to remodel it."  The renovations, completed the following year, resulted in a "drafting room and office" on the ground floor, offices on the second, and two apartments on the third.

In 1944 Leo Nejelski opened his newly-formed public relations firm in the building; and by 1961 the consulting engineer firm of Syska & Hennessy was headquartered here.  Principal John F. Hennessy and his family lived above the offices.  The firm would remain in the building until 1976.

That year renovations were made for Aegis Productions, Inc.  The apartments were converted to offices and a photographic studio installed on the two lower floors.

Today the former James carriage house is home to the English Speaking Union, which moved here from its former home at No. 16 East 69th Street in 1999.  It was founded in 1920 by Sir Evelyn Wrench who felt "that maintenance of the close personal and national ties forged during World War I was necessary for the preservation of peace," according to the group's website.

The handsome structure survives from the days when the liveried drivers awaited the call from Murray Hill mansion owners for their carriages.

photographs by the author
Posted by Tom Miller at 1:29 AM