In the first years of the 20th century, Charles Larned Atterbury and his wife, the former Katharine Mitchill Dow, lived at the fashionable address of No. 23 East 62nd Street.  The Yale-educated lawyer had been the solicitor for the Erie Railway Company before later becoming its Assistant President.  He also served as counsel for the Chicago and Atlantic Railway Company, and the Pullman Palace Car Company.

The couple’s son, Grosvenor, was 40 years old in 1909.  He too attended Yale before studying architecture at Columbia University and then working with McKim, Mead & White.  He was by now firmly established as a respected architect and was working on a major commission—designing the charming model housing community of Forest Hills Gardens for the Russell Sage Foundation.  But that year his parents would give him one more project—remodeling an old rowhouse for the family’s use.

Around 1871 architect Robert Mook designed two Anglo-Italianate brownstone houses for wealthy produce merchant and part-time developer Pearson S. Halstead at the northwest corner of Lexington Avenue and 70th Street—Nos. 760 and 762 Lexington Avenue.  Halstead sold the newly-completed No. 762 to Ebenezer Hurd and his wife, Jane, for $26,000 (roughly $520,000 today) and kept the corner house for himself.

It is unclear whether the entrance to Halstead’s commodious home was always on the 80-foot long 70th Street side; but as early as 1884 he was using the address of No. 131 East 70th Street.  On July 22, 1889 the 78-year old Halstead died suddenly in the house.  His widow, Christina, lived on here until July 6, 1905 when Halstead’s estate sold No. 131 to “Chas. L Atterbury and Kath. M. his wife and Grosenor Atterbury joint tenants.”  The family paid $65,000 for the “four-story stone front dwelling.”

By October 16 Grosvenor Atterbury had filed plans and awarded the general contract to J. B. Acken to remodel the old brownstone.  The renovations would cost another $20,000 and result in a rather startling residence.

Oddly enough, Atterbury did little to the Lexington Avenue façade, retaining the Italianate quoins, the projecting sills on their little brackets, and the elliptical arched windows of the 1870s.  On the 70th Street side, however, he went all out.

He splattered the façade with irregularly-positioned openings and bays; and added a two-story elliptical oriel.  Reportedly, the leaded glass in the seven-sided copper bay had once belonged to Louis Comfort Tiffany.  The intended effect was that the house had developed its quirky personality over decades, rather than a few months.  The up-to-the-minute home included a connected garage, below the drawing room, complete with reception room and leaded-glass windows.  It was accessed on the far west end of the house.  House Beautiful noted “This unusual proximity to the main entrance and to the living quarters has not proved in the least objectionable, while the direct access to the car from the main house is of inestimable value as an everyday convenience.”

The Atterbury family moved into the house in 1911.  Grosvernor’s interior renovations reflected the sophistication and taste of the family.  Basically English in design, there was oak paneling, beamed ceilings and leaded glass throughout.  The House Beautiful commented “gloominess would be the last word to apply to Mr. Atterbury’s house.  Mr. Atterbury has progressed beyond the state of mind of a puristic practitioner.”

“Gloomy” was prevented by the use of color and material.  One fireplace was faced in bronze, the paneling of the dining room was enlivened by a frieze of blue-green Spanish leather; and the wooden details included carved thistle and rose elements—symbols of the Stewarts—and linen-fold panels.

In 1913, just two years after moving in, Charles Atterbury became ill.  A year later, on November 10, he died in the 70th Street house less than a month before his 72nd birthday.  Katharine was the same age as her husband.  She lived another eight years with her son, dying here after a short illness on Wednesday, December 21, 1921.

New York society may have been shocked when, on March 27, 1923, Mr. and Mrs. Homer C. Johnstone announced that their daughter, Dorothy, and Grosvenor Atterbury had been married four days earlier.  The quiet wedding of 54-year old architect and his bride had taken place in the 70th Street house.   In reporting on the marriage on March 28, the New York Evening Post noted “Mr. Atterbury is one of the most prominent architects in this city” and added “Mr. Atterbury and his bride will sail to-day for Nassau, and upon returning will make their home at 131 East Seventieth Street.” 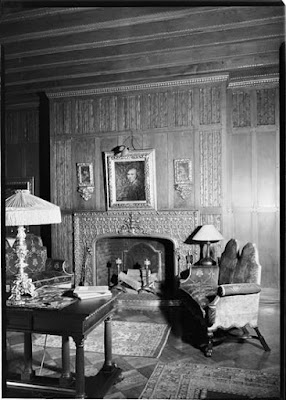 Like all well-to-do Manhattan couples, Dorothy and Grosvenor closed their city homes during the hot summer months.  The Atterbury’s 80-acre estate, Sugar Loaf Acres, was in Southampton.  In the summer of 1925 just two servants, sisters Frances and Elizabeth Koff were left back to watch over the East 70th Street house.  Everything went fine until shortly after midnight on Friday, July 31.

Rain was beating against the windows as the sisters sat in the kitchen and prepared a pitcher of iced tea.  Frances asked Elizabeth if she were sure all the windows upstairs were closed.

“I think so, but as soon as I finish making the iced tea I’ll go up and see.”

Instead, the sisters went together.  Elizabeth carried the pitcher of tea as the two rode the elevator to the top floor.  They checked the windows and the hatch leading to the roof, then headed back down.  Just as the elevator passed the third floor, it ground to a stop.  Concerned but not panicking, they both tried punching this button and that.  The elevator would not move.

Two days later The New York Times reported “Calmly the two surveyed their situation…They were alone in the house.  After some moments’ consideration one of the sisters pushed a button which rings a large gong in the basement.  There was no one in the basement to answer it, of course, but it was the only thing they could do.”

Of course, it was the dead of the night in a nearly-deserted residential neighborhood.  Although the gong kept ringing, there was no one to respond.  So they simply sat on the floor of the elevator and drank tea.

Almost four hours later beat cop Paul Minor heard the “incessant ringing of the gong.”  Assuming it was a burglar alarm, he called another policeman.  He and Officer Sullivan tried all the doors and found them locked.  They woke up the residents in No. 962 Lexington Avenue, crossed the roof, and started forcing the hatch.

The two servant girls, most likely afraid of the damage they would be held accountable for, shouted for them to stop.  The policemen hear Elizabeth calling to “get a ladder and try to enter one of the front windows.”

In the meantime, six more policemen arrived.  One of them sent for Hook and Ladder Company 16.  The fire truck’s ladder was raised to an upper window and the firemen and police clambered in.   Unable to solve the girls’ predicament, a repairman from the Otis Elevator Company was summoned.  Eric Granfeldt climbed up the fire truck ladder and into the house.  Within a few minutes he found that the safety control in the bottom of the shaft had somehow dislodged, preventing the elevator from moving.  The girls were freed.

The Koff sisters tempered their gratefulness with annoyance.  “We did not mind the wait at all, for we had our tea and we knew that we couldn’t stay there forever,” explained Elizabeth.  But she added “If someone had had sense enough to notify the elevator people immediately, we wouldn’t have had all this fuss.”
By 1949 the Atterburys had left East 70th Street.  Grosvenor died in Southampton on October 18, 1956 at the age of 87.  No. 131 East 70th Street was converted to a doctor’s office on the ground floor in 1949, with “showrooms and workroom” on the second floor, and two apartments each on the upper floors.

The ground floor space became the boutique of Eulalie, described by The New York Times on September 21, 1950 as “a promising newcomer to the field of fashion designers."  The second floor “showroom” was well-known to Manhattan women as the Pierre & Fred hair salon for years.

Nearly a century after Atterbury completed his remarkable remake of the house, owner E. William Judson finished an exterior renovation in 2006.  Sadly, the leaded glass in the second floor oriel was disintegrating and was deemed unsalvageable.  The panels were removed, but thankfully not discarded.


The parlor floor, where Pierre & Fred had been, is now home to the upscale Hayward House.  Its owners, John Goldstone and his wife, the former Marin Hopper (daughter of motion picture actor Dennis Hopper), live upstairs with their daughter.   Their meticulous restoration of the drawing room and dining room included resurrecting the ceiling stenciling from beneath decades of grime, repainting areas which were lost; and careful removal scores of nails and built up lacquer (from years of hair spray mist in the air).  The charming sixth floor where the elder Atterburys lived has exposed beams, strapwork hinges and other interior elements of the Arts & Crafts era. 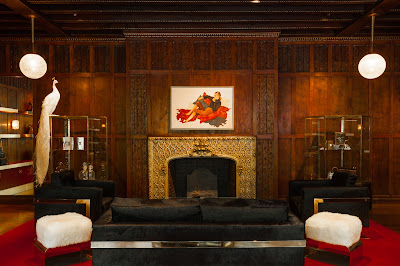 The façade was touched up, again, in 2015.  Grosvenor Atterbury’s eccentric and wonderful purposely-accidental design mostly survives and is still a cause of occasional head-scratching by passersby.

many thanks to John and Marin Goldstone for taking me through their exceptional home.
Posted by Tom Miller at 2:41 AM