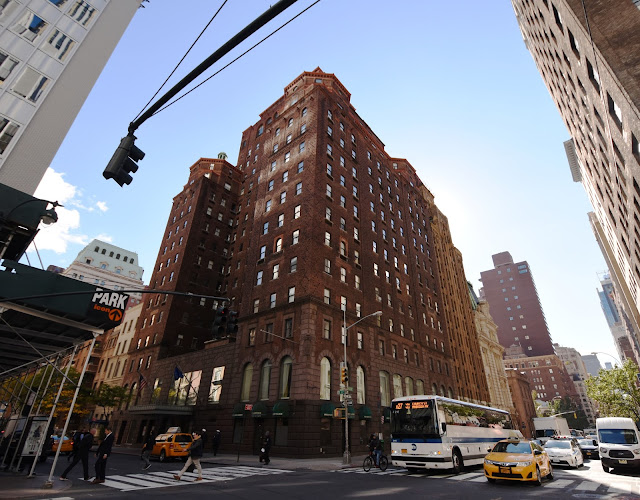 John Murray had anticipated the northward expansion of the city when he wrote his will, restricting the development of his country estate for private residential purposes only.  By the mid-19th century the area, now known as Murray Hill, was filled with handsome upscale homes.

But by the first years of the 20th century commercial interests had migrated this far north as well.  The Murray Hill residents steeled themselves to fight incursion.  The South Dutch Church stood at the corner of Madison Avenue and 38th Street, but the congregation had moved to Park Avenue in 1910.

When a judge approved the erection of an apartment building on the site in July 1914, the Murray Hill residents were shocked.  "It was the general opinion that the ancient Murray Hill restriction has received, in the recent Court opinion, the hardest blow that it has ever encountered in the long fight to preserve the old-fashioned exclusiveness of the neighborhood," wrote The Times on July 12.

A few weeks earlier the Murray Hill Association had been formed "to prevent encroachments upon the old restriction."  Among its powerful directors were J. P. Morgan, Warren Delano, and Temple Bowdoin.  The Association announced its intentions to appeal the ruling.

The fight, as it turned out, resulted in only a delay.  On March 6, 1914 Wisconsin's The Blair Press reported "Today the Fraternity Club's' building stands practically completed at Madison avenue and Thirty-eighth street.  It is an imposing structure of 17 stories, not far from the center of the Murray Hill club, residential and theatrical district."

A syndicate, the Allerton 38th St. Co., Inc., had commissioned the architectural firm of Mugatroyd & Ogden to design the neo-Romanesque structure.  The Blair Press described it as "built of tapestry brick, trimmed with limestone, towered to conform, both with architectural beauty and with the requirements of the city's zoning law."

The zoning law to which the newspaper referred was the 1916 setback rule that required tall buildings to include setbacks.  The architects used the law to its architectural advantage, creating a Tuscan-inspired structure with tiled roofs, picturesque arcades and diapered brickwork.

The Allerton group operated several "club hotels," but this would be unique.  While several wealthy university clubs--the Harvard and Yale Clubs, for instance--erected their own handsome clubhouses, the Fraternities Clubs Building would house 17 college clubs.  The Cornell Club of New York took space, as well.  Its "beautiful quarters" had a private entrance on Madison Avenue and dedicated elevators.

The Blair Press noted "The building has everything a modern club might ask for.  There are squash courts, handball courts, Turkish baths, a gymnasium, locker rooms, billiard rooms, a beautiful lounge, a dining room to seat 200, smaller private dining rooms, a cafeteria, one of the largest roof gardens in New York, and more than 500 bedrooms."

The individual clubs "arranged the interiors of their quarters in accordance with the plans of their own architectural committee."  The New York Times, on February 23, 1924, added "An oyster bar, tailor shop and dressing rooms are in the basement," and described the 14th floor promenade "which encircles the building"


The building formally opened on February 22; but a month earlier the squash courts had been opened by national open squash tennis champion Walter Kinsella and Robert L. Cahill.  The New York Times noted on January 19 that the two would meet "in the first of a series of matches planned for the promotion of athletics among the seventeen fraternities which have rooms in the building."

While the fraternities were the most obvious tenants, other groups like the Epiphany Guild of America moved in as well.  The Guild described its lofty (and perhaps confusing) purpose as to provide "reading courses in the ancient Arcane wisdom with the specific object of building character and development of human efficient, applying this knowledge to the vital problems of life."

For decades the clubrooms would host lectures and discussions on socially and politically relevant topics.  On August 4, 1925 Rev. Dr. Charles Francis Potter of the West Side Unitarian Church spoke about the Scopes trial in Dayton, Tennessee.  Potter had gone there as unofficial aid to counsel for John Thomas Scopes.

Saying that the evolution trial was deliberately planned and was fostered by "a thirst for publicity," the minister was clear in his disdain.  Speaking at a Delta Upsilon Club luncheon he called the Dayton citizens "freaks" and said "Something that no one seemed to appreciate was that Judge Ralson himself is a Fundamentalist minister, and that up to three weeks before the trial he conducted revival meetings at different points near Dayton."

Potter scoffed that "the 'Holy Rollers' would have introduced in the Tennessee Legislature a bill prohibiting the teaching of geography in public schools because the Bible indicates that the earth is flat."

It was here, at a dinner of the Lions' Club on June 2, 1927 that Lieutenant Leigh Wade announced he was planning a 15-day flight around the globe.  The ambitious project, however, was "very much in embryo," according to The Times.  Wade had still not received financing for his bi-plane adventure.


Another surprising topic had to do with America's relations with the Soviets.  On June 26, 1928 Colonel Hugh L. Cooper spoke at a luncheon in the Delta Upsilon Club.  While he described communism as "this awful disease," he said "Russia is the richest nation in the world in natural resources...but they don't know how to develop them."  He saw that as a vast opportunity for American capitalism. "There never was such a pioneer field available as is Russia today to Americans."

The following year, on February 12, 1929, the President of Notre Dame University spoke at a luncheon of the Notre Dame Club.  His views of football were, most likely, surprising to the alumni gathered that afternoon, and inconceivable to college football fans today.

"We deplore the excessive and almost exclusive eminence of Notre Dame as a place where a football team is turned out.  Nobody at Notre Dame is fooled by it, least of all the boys and those who play on the team."  He described the university's football fame as "only a bubble" and predicted that academics would soon overshadow the sport.  He nevertheless announced the school's intentions to begin construction of a $750,000, 60,000-person football stadium in the spring.

The building's various fraternity clubs had strict admission policies, most of them requiring ID cards.  Nevertheless, non-members Frederick Kendrick and Joseph M. Roure gained access on April 18, 1930.  In the main dining room they "noticed a procession of men walking fro the dining room to a hallway."   Kendrick later explained "We thought something was up so we followed them.  They led us right into the bar."

They sat down and ordered two drinks of whiskey, but were told by the waiter, named Sandy, "We can't sell you a drink, but we'll sell you a bottle of rye."

The pair came back on April 22 and 23 and "on each occasion were made to feel at home."  As they wandered around the building, they discovered another bar in the locker room in the basement.

The men would return one more time, on April 30, when the Fraternities Clubs Building was raided.  Five employees were arrested and 101 bottles of liquor seized.  Officers of the clubhouses refused to make a statement regarding the illegal activities, "however, admitted they were completely mystified as to how the prohibition agents gained admission to the club even though they pretended to be college men," reported The Times on May 1.

The male-only bastion was jolted when its managing director, George A. Richards announced on August 12, 1932 that the building "will open its doors to women" beginning on September 1.  The Times reported "The ninety rooms of the fourth and fifth floors of the building have been redecorated and furnished with a 'feminine touch,' and the advance response to the change in police has led the Allerton Operating Corporation to make plans for possible use of addition space for women."

In 1933 Eleanor Roosevelt established a "rest room and canteen" for unemployed girls in the building.  It was doubtlessly no coincidence that the Greater New York Branch of the League of Nations Association opened here the following year.

The New York Fraternity Clubs had been discussing construction of its own building since 1929; and in 1935 its clubhouses were gone and the building was rechristened the Midston House.  Although organizations like the Technical Publicity Association, the Silk Travelers' Association, the Aviators' Post 743 of the American Legion and the Association of Trial Lawyers had taken space by 1936; the former men-only building continued to fill with women's groups. The American Association of University Women and the New York Newspaper Women's Club joined those already here.

Fred Garrett moved into one of the apartments in 1945.  The 55-year old, tragically, was not as up-to-date with women's independence and ability to defend themselves as many of the females who met in the building.  On September 5 the following year a blonde woman, about 28 years old and wearing a gray suit, was standing on the corner of 38th Street and Madison when Garrett approached.  His remark was quite obviously offensive and witnesses said the woman "slapped [him] in the face so hard that he fell to the pavement and died."

After Garrett fell to the sidewalk, the woman fled in a taxi.

In 1961 the former Fraternities Clubs Building was converted to the Lancaster Hotel.  It became a favorite address for political campaign headquarters.  When Franklin Roosevelt, Jr. ran for Governor in 1966 his headquarters were here; as were Arthur J. Goldberg's when he ran for the same office four years later.  (Goldberg's staff sneaked out in August 1970 owing the hotel $6,500 in rent.)  And in 1973 the Lancaster housed the campaign offices of Republican candidate Mario Biaggi.  On October 5 that year burglars stole $1,000 in office equipment from Biaggi's offices; and a gutsy robber held up the desk clerk the following day, fleeing with $400. 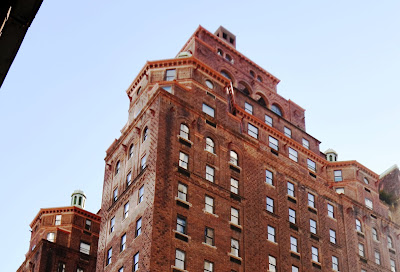 The Lancaster Hotel was converted to the Jolly Madison Towers hotel around 2000.  Although the once beautiful arcades at the 2nd and 15th floors have been enclosed with windows; Mugatroyd & Ogden's design--a Tuscan monastery exploded to 20th century proportions--survives greatly intact.